Born out of Toronto mosh pits, PUP was a band that fought their way to the top of their local scene. With the iconic frenzy of the DIY punk scene that they were born out of, the unusual time signatures found throughout their discography and an unforgettable stage presence that commands audiences to their feet, PUP’s music is almost impossible to take off repeat. And as impossible as it sounds, it’s even better when you hear it live. Fortunately for their fans, the Canadian punks seem to know it. Their outrageous tour schedule keeps them on the road more often than not. Less than one year after their last Denver appearance at the Gothic, they’re on their way back to the Mile High City – this time at a larger venue.

PUP will headline the Ogden Theatre, and there’s still plenty of time to get tickets – but they sold out quickly last time, so you won’t want to wait too long. Before they stop here in Denver, we got a chance to catch up with drummer Zack Mykula to get the inside scoop on the reality of being a punk band, making new music and the demands of touring. 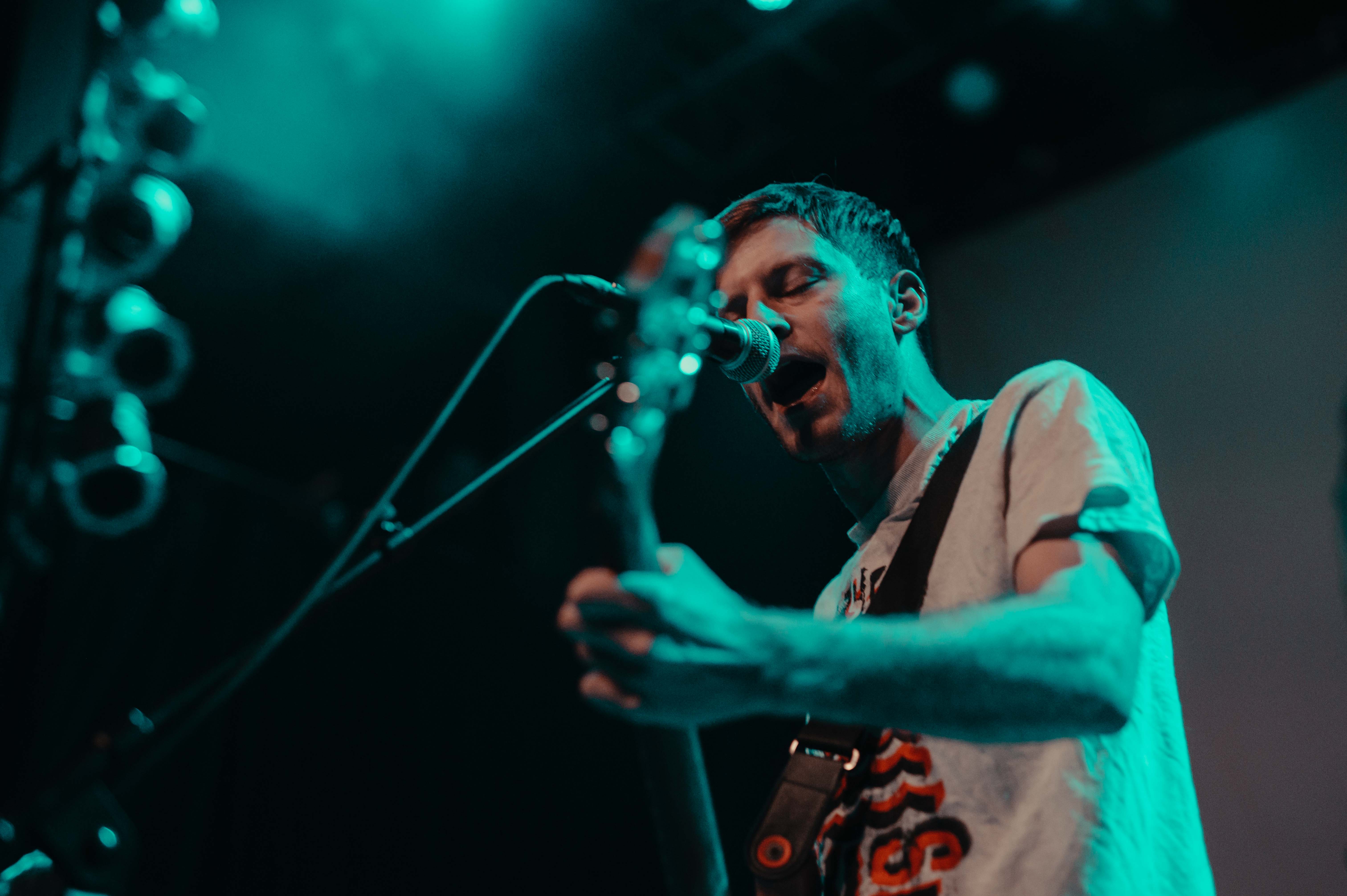 303 Magazine: You’ve been tour warriors these last few years, and obviously you aren’t slowing down. Your last tour just wrapped up in November and you’re already back out on the road, starting today! What keeps you guys touring as extensively as you do?

Zack Mykula: Ultimately, it’s mostly because that’s really the only way that we can make money is to do shows and by selling merch. That’s really the only sustainable way for a band like us. We’re not like, getting played on the radio, we’re not getting major syncs and crazy commercials, we’re not getting licensed to movies. We just gotta go out there and pound the pavement and, you know, keep doing it. Just kind of – I hate to say it, but stay relevant with our audience. Right now, it’s just such a content consuming culture of music. So, you’ve just always got to be doing something, and right now, for us that’s touring.

303: That is kind of a bummer, but you guys seem to be really fortunate to have a fan base that at least appears to be incredibly supportive – and if social media is any indication, they’ve been playing your last album on repeat since its release. Are you excited to get back out to them?

ZM: Yeah, I mean, that’s essentially what it’s all for. We have amazingly supportive people in our audiences. They’re amazingly accommodating and generous fans. It’s awesome to get back out, whether it’s two months or two weeks after the last tour and get to slog it out and hang out with those people. It’s tiring, and it can be exhausting, but there’s a huge part of it that we’re addicted to – we have to keep doing it.

303: That connection to your fans really ties into the thing I wanted to talk about next, which is the video that you recently released for “Morbid Stuff.” For that video, you essentially gave your fans some cameras to film on at a show, can you tell me a little bit about that?

ZM: Yes! We wanted to do something – as with all of our videos, we try to do something kind of unique, and something that is a step beyond something that the fans and other people can just watch. It’s about getting people involved and making sure that they feel like they’re a part of it, more than just your average video, you know? So, we kind of looked to documentaries – in particular, there’s a Beastie Boys music video that was semi-fan shot, and there’s a bunch of other stuff we pulled from.

We thought that would be really cool. We had the amazing photographer Amanda Fotes – she kind of headed up the logistics of that whole thing. We handed it out to fans, and got all of this crazy content and kind of put it all together after the fact, and ended up with that insane fan video where people are just kind of unhinged. You can kind of see the enthusiasm and the generosity of our audience.

303: The timing for the release of that video was impeccable, and it made me really excited for this tour. I felt like it really encapsulates the energy that you all have on stage as performers. But, I am curious because you have a unique, and very stationary position, as the drummer. Do you feel like being stuck in one spot affects how you’re able to interact with the audience or the rest of the band?

ZM: [laughs] I feel like I’m too busy on stage to worry about that most nights. Just between my parts and having to sing all the time. I think we’re all fairly animated in our own way, and we all feed off of each other. I think if any one of us were in a different position or were any different, it would be a completely different beast. Yeah, it definitely doesn’t feel stationary. I’m constantly moving, even though I’m sitting down. 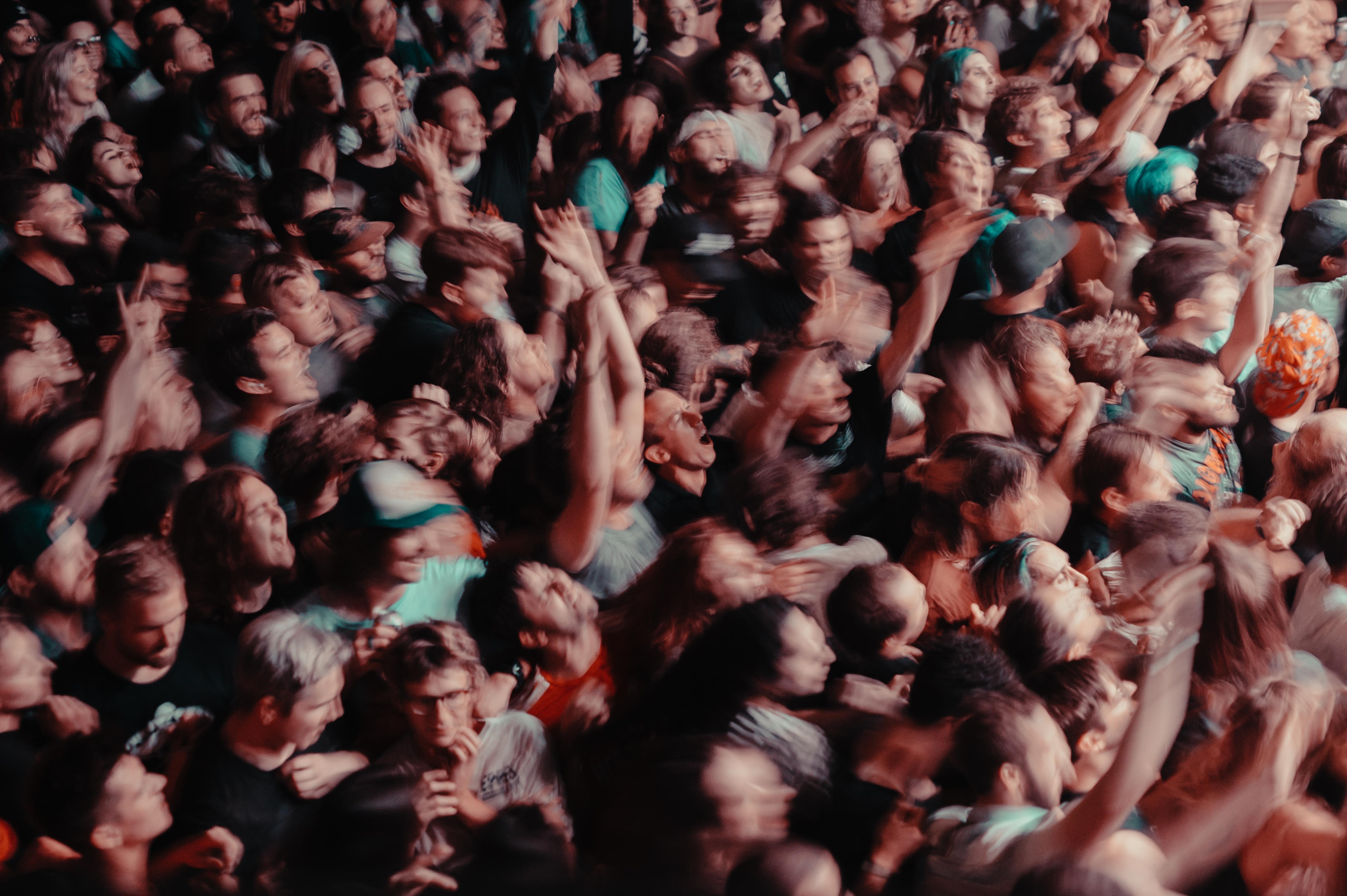 303: It is an impressive feat to keep your composure behind the rest of the chaos on stage and especially what’s going on in the audience. Having tried and failed to play drums myself, I don’t think that I could ever do what you do!

ZM: [laughs]Don’t say that, unless you don’t want to. I think anyone can do it. I mean, there’s so many factors. I also have crazy performance anxiety. That affects how I connect with the audience too, it affects how much energy I’m expending night-to-night, it affects general enjoyment. It’s something I personally fight against a lot. There’s so many factors. It’s hard to see where one ends and one begins.

303: It’s really interesting that you bring up performance anxiety because one of the things that’s different about this tour, even though it’s so soon after the last one is that the size of the venues you’re playing are larger. Morbid Stuff was so well received that it seems like in some ways you were thrust onto a larger platform almost overnight. How has that affected you?

ZM: To us, it’s hard to see when you’re so close to it. Obviously, we notice how much bigger the venues are and how things have grown. It definitely, to us, seems way more incremental, than I think it would be perceived from the outside. It feels awesome that people are connecting to it and we get to talk about things that are important to us. People enjoy and try to respect each other and the environments we create. I think we’re all very grateful. 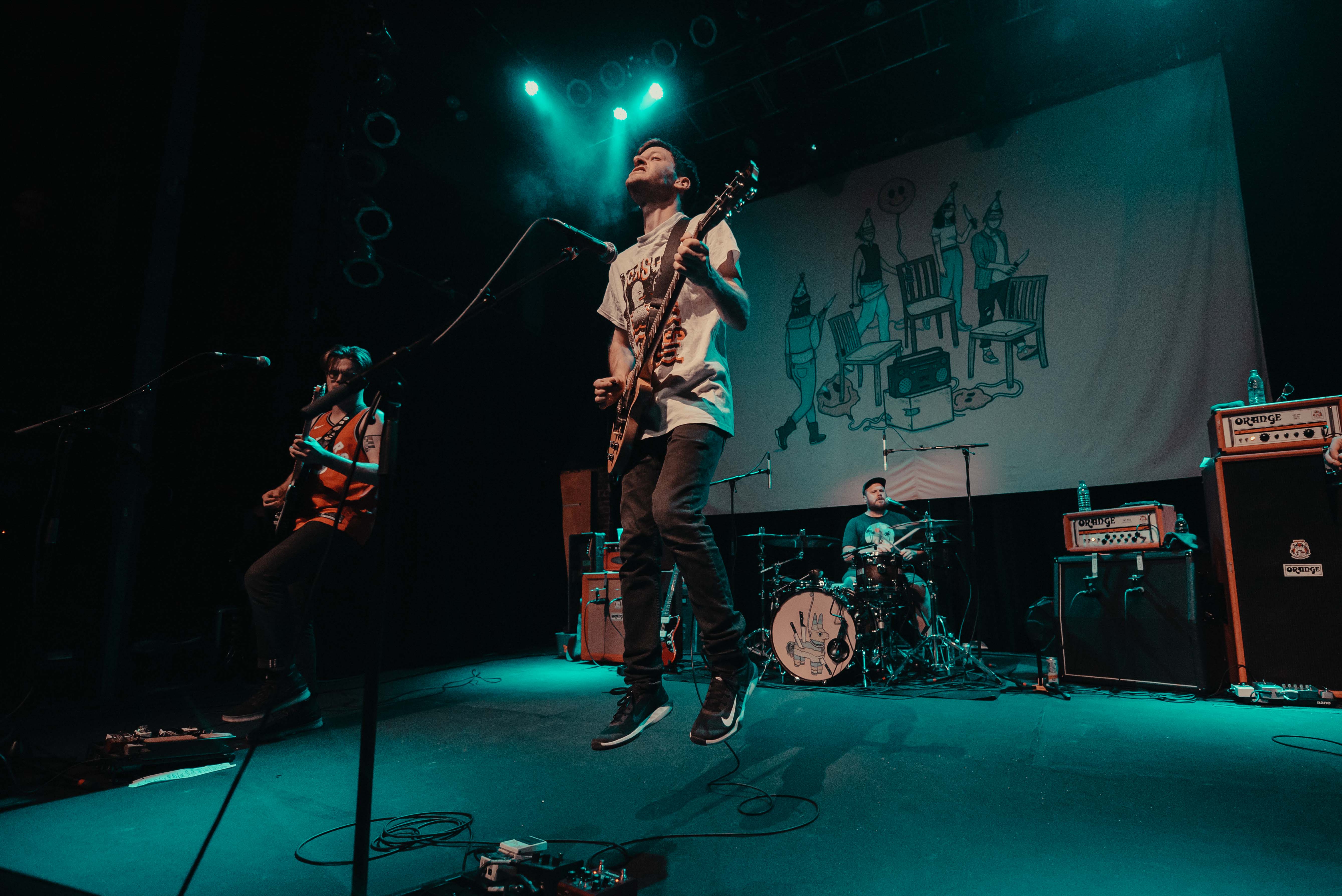 303: One of the things that I’ve seen mentioned fairly consistently about that album is the high-level of technical writing skills and the unique time signatures within the songs. However, no one in the band has been shy about the general lack of classical musical training within the band. Can you talk to me a little bit about what your process for writing music is like?

ZM: It’s convoluted and it can be pretty annoying at times. We all are obsessed with generating new ideas and new ways of looking at stuff. So, ultimately, it just becomes – every song ends up becoming just this pudding of ideas. You really need to sift through it to get the best ideas out of it – a lot of editing. And then in the end, after all the editing, you have to smooth everything out and make it all make sense together.

303: I know it’s a long process, so it might be a while before you’ve got anything new for fans, but you teased on Twitter that you were writing and recording some new music. Is there anything you can tell me about that?

ZM: Yeah, I mean, it’s just a demo. We’re always demoing stuff. This is kind of dipping our toes into the water, getting back into the whole swing of writing. We only really demoed one song. It’s just kind of exploring and getting back into the groove. It’s kind of picking up the pieces after Morbid Stuff and the album cycles and seeing where we can take new stuff. It’s not a big deal. It’s just trying to demo some new stuff. 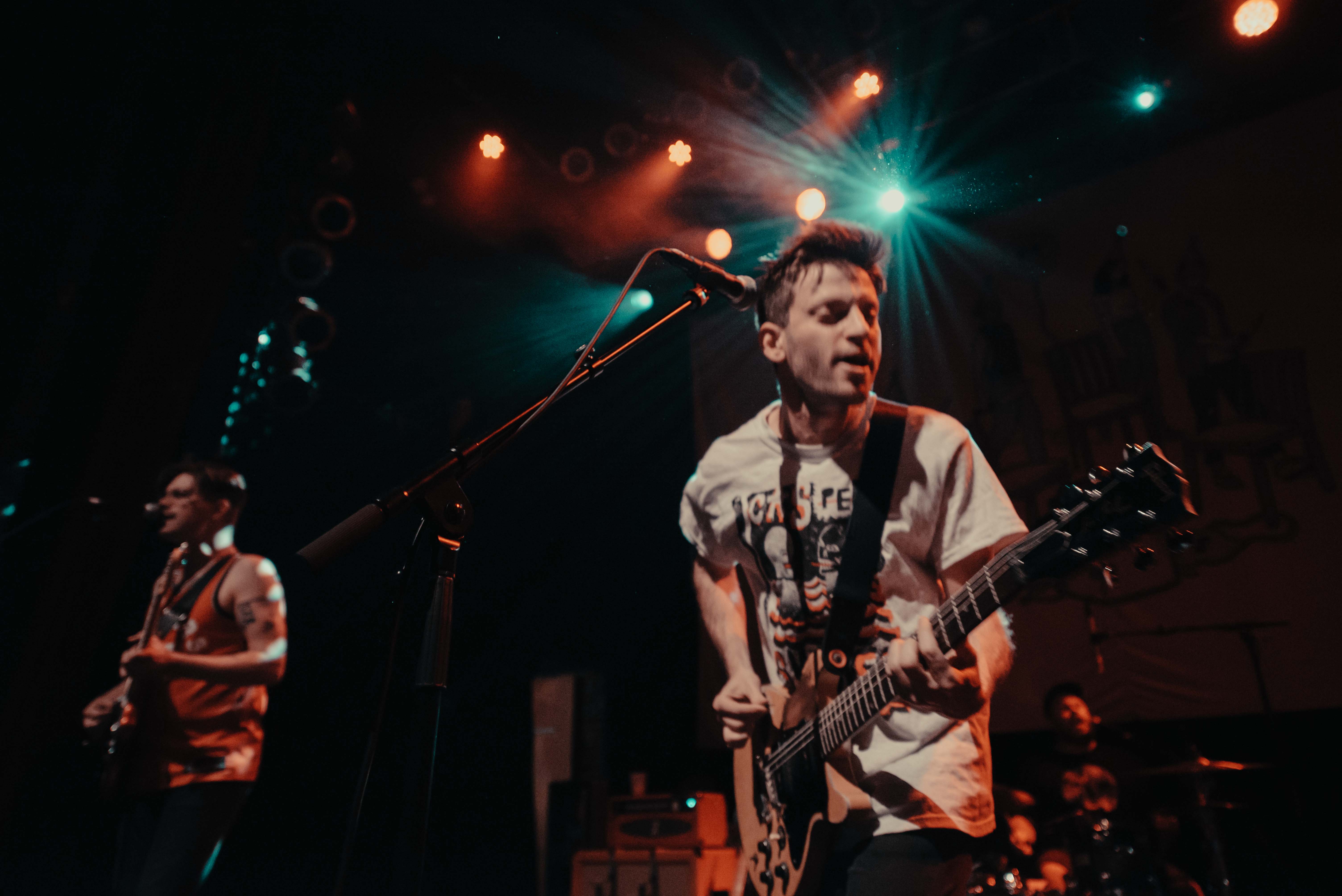 303: When you haven’t been demoing and songwriting, you’ve been crafting beer! Can you tell me a bit about that?

ZM: The brewery itself is a brewery outside of Toronto called Town Brewery. They’re awesome. They’re a really good little outfit, somewhat new, I think two years old. Some of the most generous and amazing people work there, and they reached out to us. They usually do a charity beer, they always have a charity beer in their back pocket, they’re always trying to do community-building stuff – they’re awesome like that. So, with us, they kind of just put it to us, like what beer do you want to do and what kind of charity were you looking to do it with? We’ve worked with this charity called Sistering before, and they do amazing work in Toronto. They, in general, are helping women and trans people and homeless women – a lot of people have a place to eat, or just give them support. They’re just an amazing community organizational hub of people that are just trying to make a difference on a relatively small scale, with relatively few resources. So, we love that charity so we chose them. Everyone was pretty excited to work with them. I think they made 2,500 cans of the beer and it ended up selling out pretty quickly. About a dollar per can was going to the charity.

So, as a result of this, just seeing an outpouring of support from fans of us and fans of the brewery and this amazing wave of support from them we ended up donating a little extra money to Sistering. It’s pretty cool. I never know what to expect with these things. We always try to do charitable things with our shows and with many aspects of our business. It was very gratifying to see the results.

303: That’s phenomenal. I’m amazed and so excited for your charity, but I have to admit, I was hoping that you’d be bringing your beer with you on tour. Denver has quite a few breweries in town, and I know that there are quite a few of us that are always looking forward to sampling a new one, especially if it’s for a good cause.

ZM: Yeah, no. [laughs] It’s gone. I don’t know if they’re going to do it again. It was in Ontario, like Canada thing only. It was super cool. I’m bummed. A lot of people showed interest in both the charity and the beer. I can’t really be happier with the result. It’s awesome.

PUP will perform at the Ogden Theatre on March 5. Tickets are available here.