We are constantly inundated with the patterns of language — advertisements, billboards, license plates, newspapers and magazines, movies, speeches, emergency exit instructions. Our everyday lives have become a habit in reading, speaking and understanding others who do the same. With that habit comes the desire to always find meaning in the things around us. But what happens when familiar forms of communication are dismantled?

This question is imaginatively explored inside Walker Fine Art for the group show titled Synesthetic Cyphers, featuring work from Sammy Lee, Deidre Adams, Roland Bernier, Bonny Lhotka, Doug Hæussner and Blair Vaughn-Gruler and on view until February 29. Like all shows at Walker Fine Art, Synesthetic Cyphers showcases the strengths of artists represented by the gallery itself. This also means that the art is a mixture of old and new work, from original acrylic paintings from the ‘90s by the late Bernier to a video of brand new choreography performed specifically for Lee’s installation.

At the core of the show is the pulsing heartbeat of understanding — we communicate with each other in order to relate to one another. But each artist reinterpreted and deconstructed the method with which we find this common ground, sometimes landing in a place where understanding is the last priority. Words are taken out of context and isolated; a visual experience is transformed into a kinesthetic one; a traditional gathering place is recontextualized; an alien language appears familiar; repetitive shapes and lines blur into word searches; society’s devotion to misleading facts and imagery is shredded.

So the show pivots around the idea that language (written or verbal) is only part of the equation of communication. We as viewers are left to interpret the resulting creations on our own. We are left with nagging questions to ponder as we peruse the different works. Do these patterns impart meaning or are they meaningfully pointless? Are we looking for something familiar or growing more insecure about being lost? Does truly effective communication rely on more than one sense? 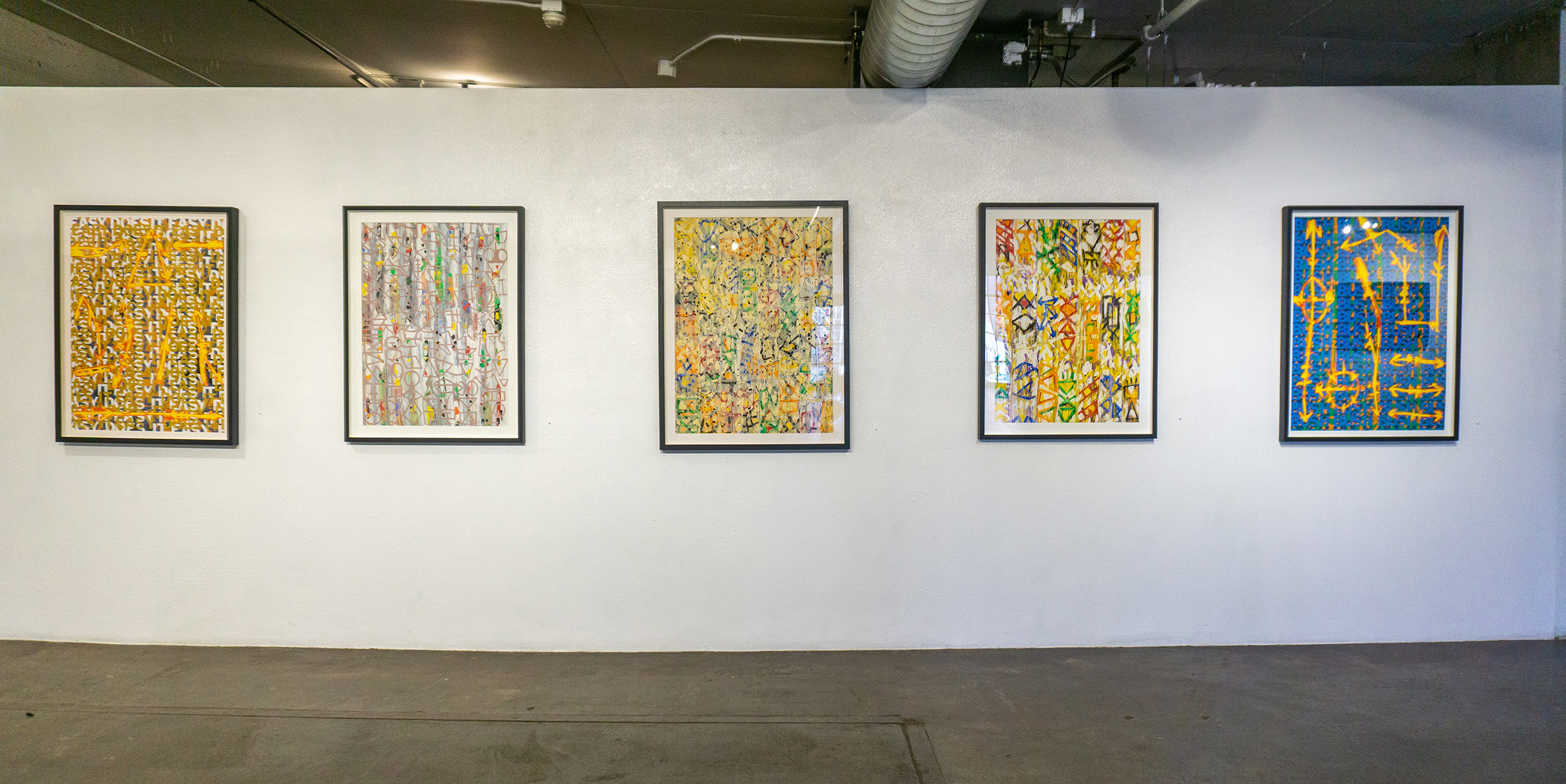 One of the high points of Synesthetic Cyphers is the showcase by Bernier, who passed away in 2015 but worked with words in his art pieces for almost 50 years. Created between 1990 and 2001, these pieces come from the Arty Fax and Graffiti collections. Easy Does It and Bush are from Arty Fax, and show Bernier’s isolation of words. “Initially I felt I had to break down the barriers of making sense by just listing words taken at random from the dictionary and putting them on canvas and board sometimes by themselves, at other times with designed or familiar images in which words were covered,” he wrote. “The idea of taking the word out of context opened a new visual world for me.”

The other three Untitled pieces are from the Graffiti series and show Bernier’s interest in deconstructing and repurposing letters as well as repetitive motifs. Much like taggers in the graffiti world, who use a repeated sign or symbol to identify themselves, Bernier’s paintings in this series betray his own handiwork — there are repeated shapes more than there are unique ones. Instead of focusing on the meaning of a larger body of written or verbal language, these pieces by Bernier ask us to question the meaning of a single word, or maybe even a single letter. It’s about aesthetics rather than definitions.

Adams’ interpretation of language intends to mystify the viewer rather than make communication more effective. First, she starts writing in a quasi-language “synthesized from her own native English as well as elements of characters from other languages” as the release stated. Even though it’s asemic (or nonsensical), the way she arranges the letters and symbols appears as words, sentences and paragraphs. The reaction as an onlooker is bewilderment and curiosity. It’s familiar but also completely foreign. Without the framework of syntax, Adams’ quasi-language wouldn’t hold as much power over the viewer. But because it looks like something we understand, we want to inspect it more thoroughly, leading to the interaction of leaning in closer, scanning each part for hidden clues and occasionally finding a small phrase that does actually make sense.

In Hæussner’s series, language (both visual and written) is literally shredded as he rips pieces from magazines, tabloids and other printed media and collages them together. Some of his pieces, like One Thousand Words, counterintuitively utilizes only images and color from magazines. Hæussner, in his no-word pieces, has deconstructed images from their original setting and repurposed them into new images.

Hæussner’s largest work on display, Fake News, is comprised mostly of ridiculous headlines from tabloids that overlap each other and compete for attention. Looking at it from afar illustrates how it could be a cohesive piece — you might see a river or a forest or a cityscape or a bunch of flowers. The visual patterns are masterful and full of narrative overtones. But as you get closer and closer, the individual headlines are lonely and unexplained, even mutilated by other strips of magazine paper. An inch away, all meaning behind the words is lost.

In Vaughn-Gruler’s work, the movement and rhythm of mark-making are emphasized, rather than aesthetics or definition or syntax or context. If you blur your eyes standing in front of one, it might look like a word search or a crossword puzzle. But ultimately, there are no letters or words intentionally relayed in her work. Instead, it’s about the process of pen to paper or brush to canvas. Inspecting Vaughn-Gruler’s paintings will illuminate her methodical repetition of brushwork and chaotic stream-of-conscious scribbles as if she’s trying to remember something that is just out of reach. Language is referenced, as Vaughn-Gruler noted, but the meaning is left unclear.

We learn early on that there is a stark difference between verbal and non-verbal communication. Physical expression allows us to decipher more than what’s written or spoken, but it, like verbal or written interactions, relies heavily on interpreting patterns. In this place, artist Lhotka prepared three etched acrylic pieces with pigment that “bring the hand” in her words, back into digital art. Aspiring to show the visual world to non-visual audiences, Lhotka created embossed and textured pieces that allow for blind individuals to share a specifically visual experience. In one of the pieces, a cityscape as seen from inside a plane has been made into a topographic representation that can be physically explored via fingertip (and touching it is highly encouraged). In another, a poem is translated into Braille and then illustrated with the special etching and embossing method that is emblematic of Lhotka’s innovative techniques throughout her career. 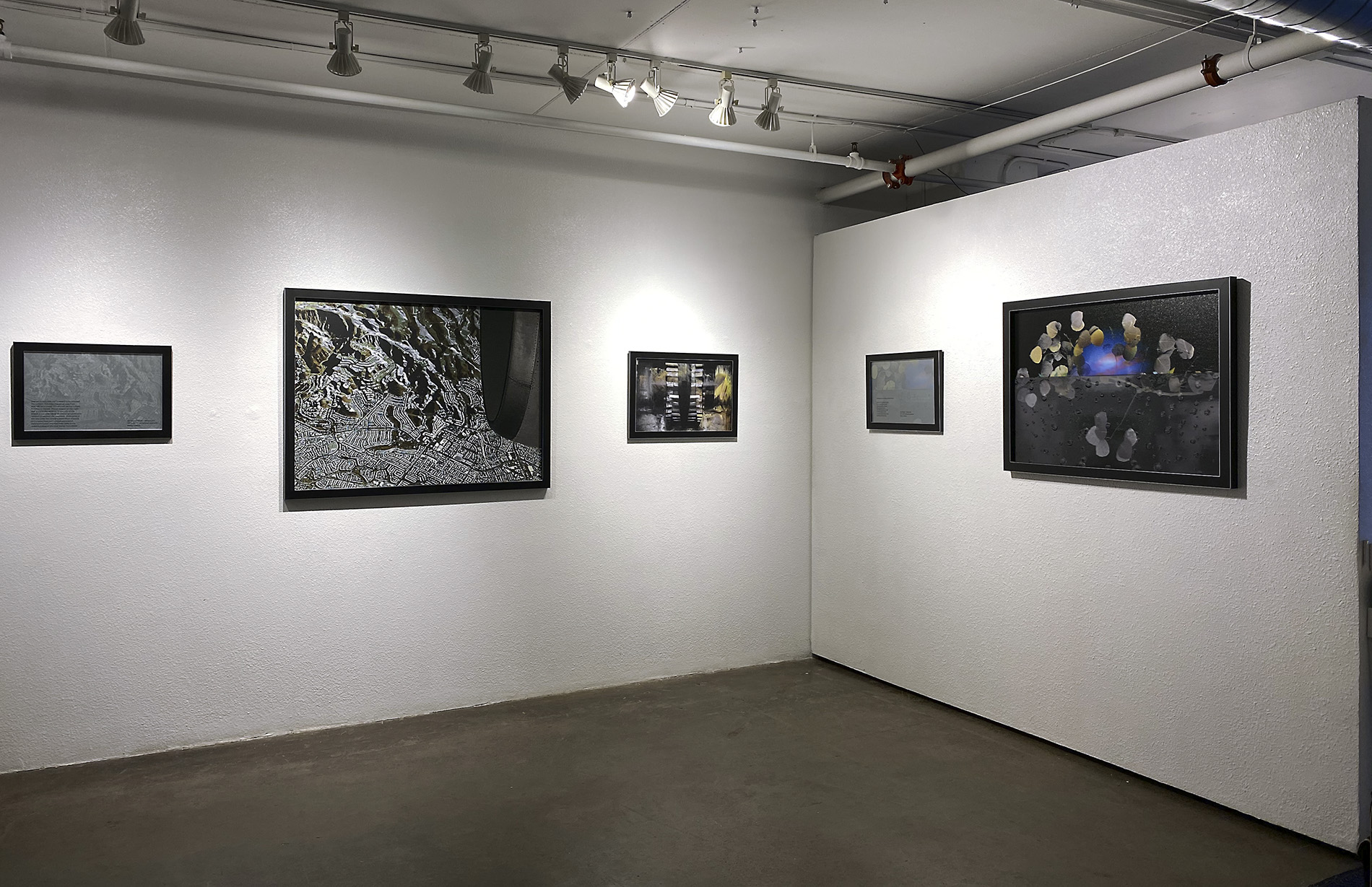 Lee’s installation, which is the first encounter upon walking in the door, bridges the gap between verbal and non-verbal communication. The paper castings — a signature of Lee’s — are Korean signs and letters that are unintelligible to most Americans. But displayed in this different medium, a three-dimensional piece of art, the words become beautiful rather than utilitarian. In POOM/MOP — the three paper castings accompanied by a video — Lee originally composed the three characters as a nonsense word but then found out that the combination actually means several different things. The video displays a choreographed version of these various meanings with dancers on top of the final piece of Lee’s installation, Baoli.

This large wooden structure is modeled off an Indian stepwell used for gathering water, cooling down and as a place for congregating. In this piece, Lee moves away from exploring the methodology of language and instead focuses on the physical act of expression. Baolis are often the local distribution center for lore, stories, legends, gossip, news, philosophy and more. They hold a significant place in the history of communication for the people familiar with them. In order to use the Baoli, people must physically interact with it by stepping down and sitting amidst one another.

It is a curatorial achievement that the Baoli is placed right by the door. It’s significant at the beginning, as a place to “step into” the mindset of the exhibit, to remember that communication is not always written or verbal, and also to remember that not everything is as it seems. It’s also significant at the end, as visitors exit the gallery they must reconsider it from a different vantage point. The stairs are multi-directional and multi-purpose, going up and down and also going nowhere at all, leaving us with the distinctly unsettling idea that language offers us no fixed guarantees and the patterns we sometimes see might simply be a coincidence.

Synesthetic Cyphers is on view until February 29, 2020.

Walker Fine Art is located at 300 West 11th Avenue #A and is open Tuesday through Saturday, or by appointment.

All photography by Danielle Reisman, courtesy of Walker Fine Art