All Photos by Sydney Adelle Sweat of SASs Photography

How a Local Instagrammer Found Herself By Becoming The Colorado “Sassquatch”

In the oversaturated, over-branded and over-aestheticized world of social media, it’s difficult to find people genuinely creating out of the sheer joy of being creative. It begs the question — is anyone being authentic anymore? Sass the Sassquatch may not be authentic in the strictest of terms, but you know from just a few moments of looking through her Instagram feed that she is being her authentic self – albeit from behind a mask.

On Thursday, October 24, 303 Magazine met with Sass and her best friend and photographer Sydney Adelle Sweat to finally find out what she was, who she was and what she was doing.

From the moment I sat down with Sass, the Colorado Sassquatch, I knew that this would be no ordinary interview. She was genuinely friendly, warm and, dare I say, bubbly. It was a welcome respite from my trek through the streets of downtown Denver and I soaked up every minute with her.

303 Magazine: What’s your background? What inspired you to start doing this?

Sass: I grew up in a nice neighborhood right outside of Washington D.C. I followed all the rules, went to college, did what my parents told me was ‘success’ and I did it all. I wound up having a corporate job that was a lot of people’s dream job, but I was so unfulfilled. I felt like I was lifeless, like I was walking around on autopilot. I was having conversations throughout the day that were not aligned with my truth or my soul. I decided that I was cheating myself and I wasn’t being true to who I am, so I actually quit on Tuesday.

303: That’s the Millennial dream! What led to that huge life decision?

Sass: My own healing journey started in March 2016. I became aware of a lot of childhood conditioning – thoughts and belief systems that I had about myself and the world – and how it was creating my world for me and keeping me contracted. I was ready to break free and be the person that dances in the street, but I have this voice inside me that says, ‘That’s weird, you’re too much. Don’t go dance in the street, don’t hug strangers and tell them you love them, that’s weird.’

Through my journey I got into shadow work, which is getting to know the different aspects of yourself internally, and I dubbed this inner voice as my monster. She was keeping me so small. She’d say, ‘You’re so weird, don’t do that.’ I tried to get rid of her, but my mentor told me, ‘No, no, no, this monster is you, you’ve got to dance with her. Create with her and become her.’ So I thought, ‘What if I become the monster that’s inside of me, who has all the power because she’s kept me so small, why don’t I use her to break free?’ 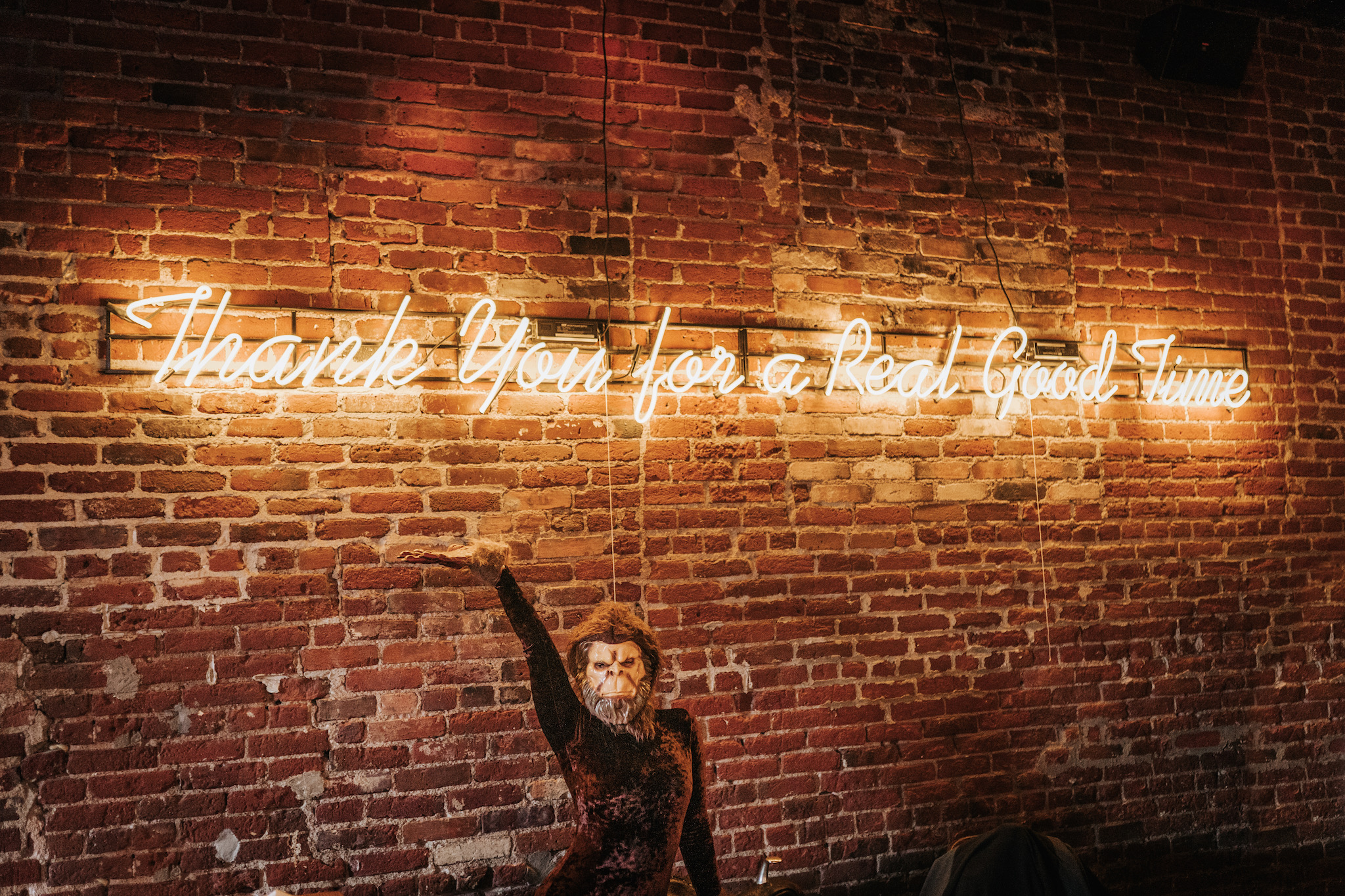 That’s what has steamrolled this entire thing, just creating from my darkness. I feel like we’re in this time right now of women stepping out because we’re not too much. We have one life to live. We only have one shot at this. The Sassquatch has been like medicine for my own self-expression to free myself and I think it’s freeing a lot of my followers. The messages that I get about what they’re feeling, it’s like a mutual thing of them fueling me every time I’m down and my monster comes back up.

Sass: I think maybe that’s why it’s being felt by people. I didn’t do this to get followers. I did it because I have to express this for myself or I’ll slowly die.

303: Okay, so where does the Sassquatch come in? How was she born?

Sass: We were coming back from Aspen and Sydney is a photographer – her initials are SAS, but her business is SASs Photography. So we were driving back and we were talking about this idea about creating something. And then one of her friends sent a picture of a sassy sasquatch card and it reminded her of me. She showed it to me and I said, ‘What if we do a sasquatch with so much sass and attitude? We’ll find some sort of costume and mask and we’ll just see where this goes.’

We call her Sass and I think that fits. When I get into her – Sydney’s gotten into her, too, for some of the shoots – with the mask and the outfit that’s still feminine and shows off our curves, I feel sassy and I want to do all of these things that I wouldn’t do just sitting here as (Spoiler Alert) Meghan. Once you put on the mask and the suit, it’s go time.

SAS: You’re less scared. No one knows who’s behind the mask. I can do whatever I want!
Who are we hyping up? Who are we hugging? How can I hype the world up? 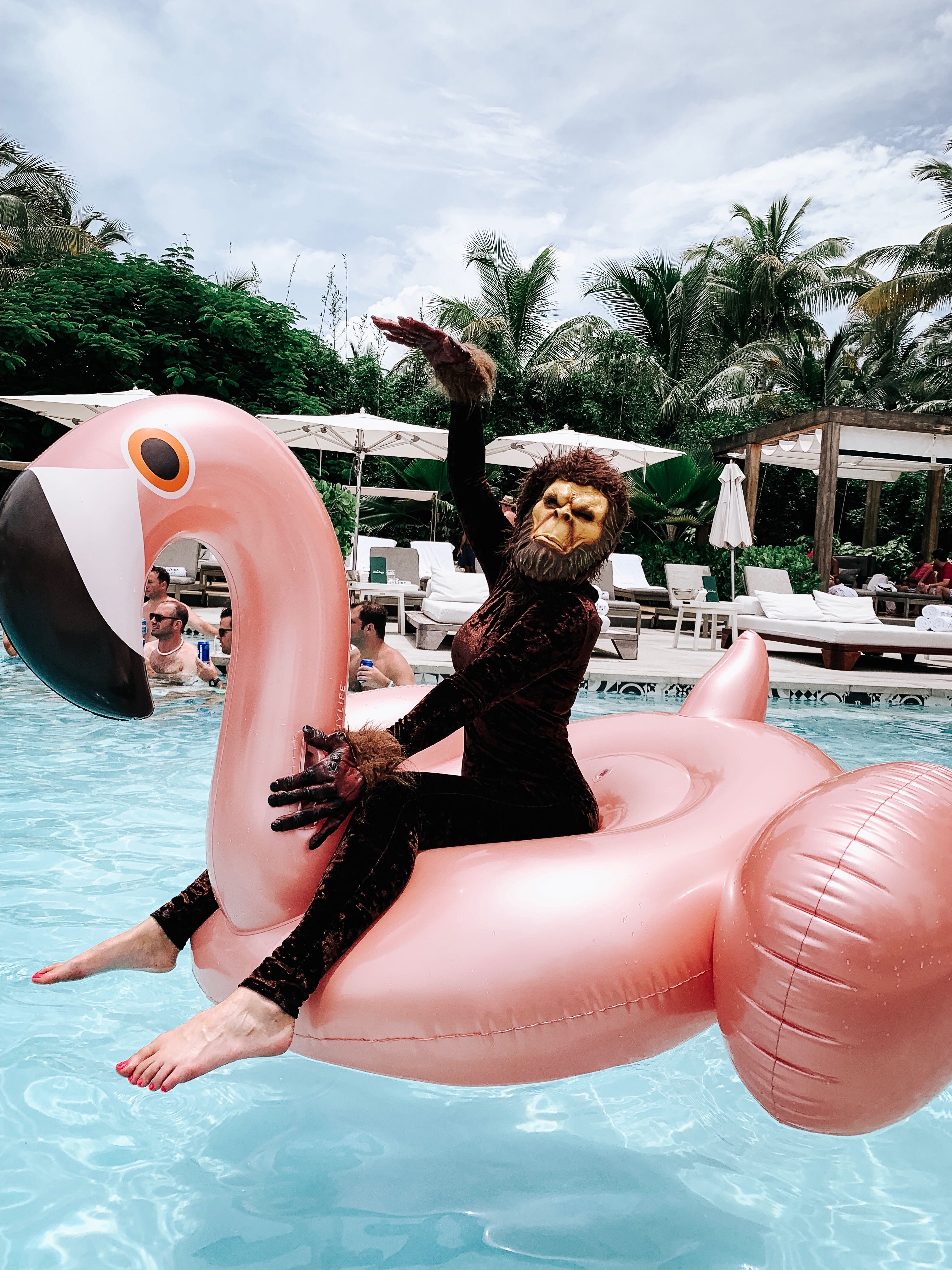 “We’re creative beings. That’s what we’re born to do.”

303: Sydney mentioned movement earlier. Do you have a dance background?

Sass: I grew up dancing. My mom put me in ballet and jazz. Then I was a cheerleader in high school. But even in college, I just loved to dance. I tried to go to more classes, but sometimes those were just restricting. I love watching choreography, but what feels true to me depends on how I’m feeling. Some days if I’m feeling like a queen, I’m putting on Beyoncé and we’re throwing down. Other days I feel light and I want to dance to a more dancey song, or maybe it’s a little darker and I go bassier. Whatever I’m feeling is what I want to translate through movement. If I’m dealing with sadness or pain, how can I channel it and transmute this feeling into something beautiful?

303: Your music videos have a dose of comedy and irreverence but they’re also joyously artful forms of self-expression and empowerment. Tell us about the first real video you two did.

Sass: When it first started, I was watching Beyoncé’s Homecoming and I was crying and shaking. This powerful queen was activating something in me. It was like a call to arms, like, ‘Everyone needs to rise up, it’s time.’ I’ve watched it so many times and I cry every single time. I looked at Sydney and said, “We gotta do Yoncé because that’s my favorite. We gotta do it because what Beyoncé did to me, I gotta do it.” So our first one was just in our backyard, in our alleyway, with this smoke bomb.

303: Tell us more about the feedback you get from your followers.

Sass: I cry daily now. I knew what I was doing was fun and special, but when people started following me and reaching out, I was touched by what they were saying. That’s why I started the Love Letters where I send people hand-written love letters. I wasn’t sure how to change the world or how to do it on a large scale, but I knew what I could do right then, which was the letters.

Once, I heard back from a woman who was having some health issues. She wrote me back on Instagram and, just the words she used, I could feel her authenticity. She said, ‘Thank you, you just changed how I was viewing my entire life.’ That’s when it hit that this wasn’t small anymore.

Just touching one person creates a ripple effect. The other day, I woke up in a fog and wasn’t feeling creative when two people reached out – it’s almost like they knew, like they were my angels – they were both like, ‘I just want to let you know, I was having a crap morning and I looked through your page and I’m going to have the best day now.’ What people write to me is what gets me pumped up to be creative on my bad days. People tell me I can’t stop and I know that I can’t. They’re inspiring me just as much as I’m inspiring them. It’s a two-way street.

SAS: Beyond just the commenting and messaging, the love letters are genuinely touching people. It’s something that’s so simple but it’s so full of love. We need more of it. It’s such a special aspect of it.

Sass: Yeah, and it’s not just a generic letter. I go to their Instagram, I look at their posts and read their stories. I study their life. I care, I want to know what they’re up to. People are doing such great stuff and I want to tell them that they’re doing right. I see them and I see what they’re doing and I don’t want them to stop. It’s just my way of creating a positive ripple. 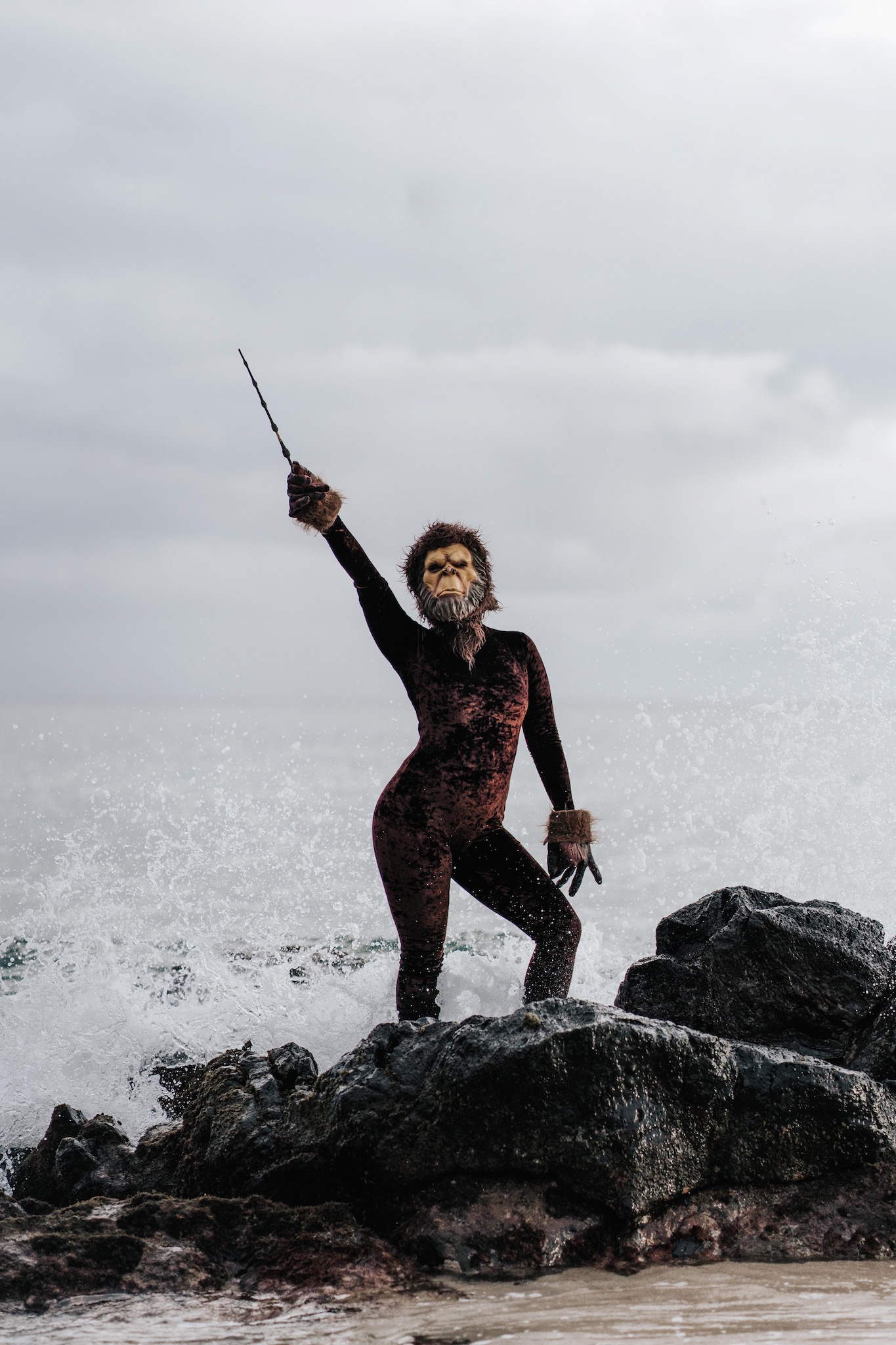 Sass: I have a belief that when you’re aligned and you’re doing your passion and being your true self that things will happen and evolve as they’re supposed to. Angels will come up and give you ideas and help you create. I feel like I’m riding this wave of creativity and I’m giving my heart to it. As I talk about it more, I feel like it’s heading somewhere really cool, but right now I just want to be here and enjoy what’s currently happening.

I was so unaware that I was living a very caged-in life because of the constructs and beliefs I had around what was possible. I thank God that I had this experience and stepped out of that paradigm and into this vast expansive world that I had no idea existed. That’s something I want to portray to people, that you can be so much bigger than you can even imagine.

This quote keeps sticking out to me: ‘Our darkness and our smallness aren’t what scare us, it’s how bright and big we are.’ Sometimes it’s scary to step into that power, but now that I’m feeling it, I need to step into it because I want others to know that they can too. That’s what Beyoncé did to me. If she didn’t step into her power, she wouldn’t have done that to me. I’m just helping that ripple effect.

Follow all of Sass the Sassquatch’s adventures at @chroniclesofasassquatch on Instagram. If you’re a fellow creative and want to work with her, DM her. She’s happy to collaborate on projects.

All Photos by Sydney Adelle Sweat of SASs Photography