FKA twigs is a rare breed in today’s music landscape. She’s multi-talented to the point of perfectionism — the type of artist to fully commit to a range of endeavors not limited to production, choreography, pole-dancing and swordplay (more on that) amongst other things. Her music is challenging, at times abrasive and other times breathtaking in its sweeping atmosphere, but never following any status quo. Her contemporaries include the likes of Björk and Grace Jones and a menagerie of other auteurs who’ve broken sonic and performance barriers. To suggest that FKA twigs is a generational talent is not a reach, rather it feels predestined. Rolling through Mission Ballroom last night, FKA twigs was not only a visual and auditory delight but also a triumphant vision of unfiltered artistry — raw and resounding. 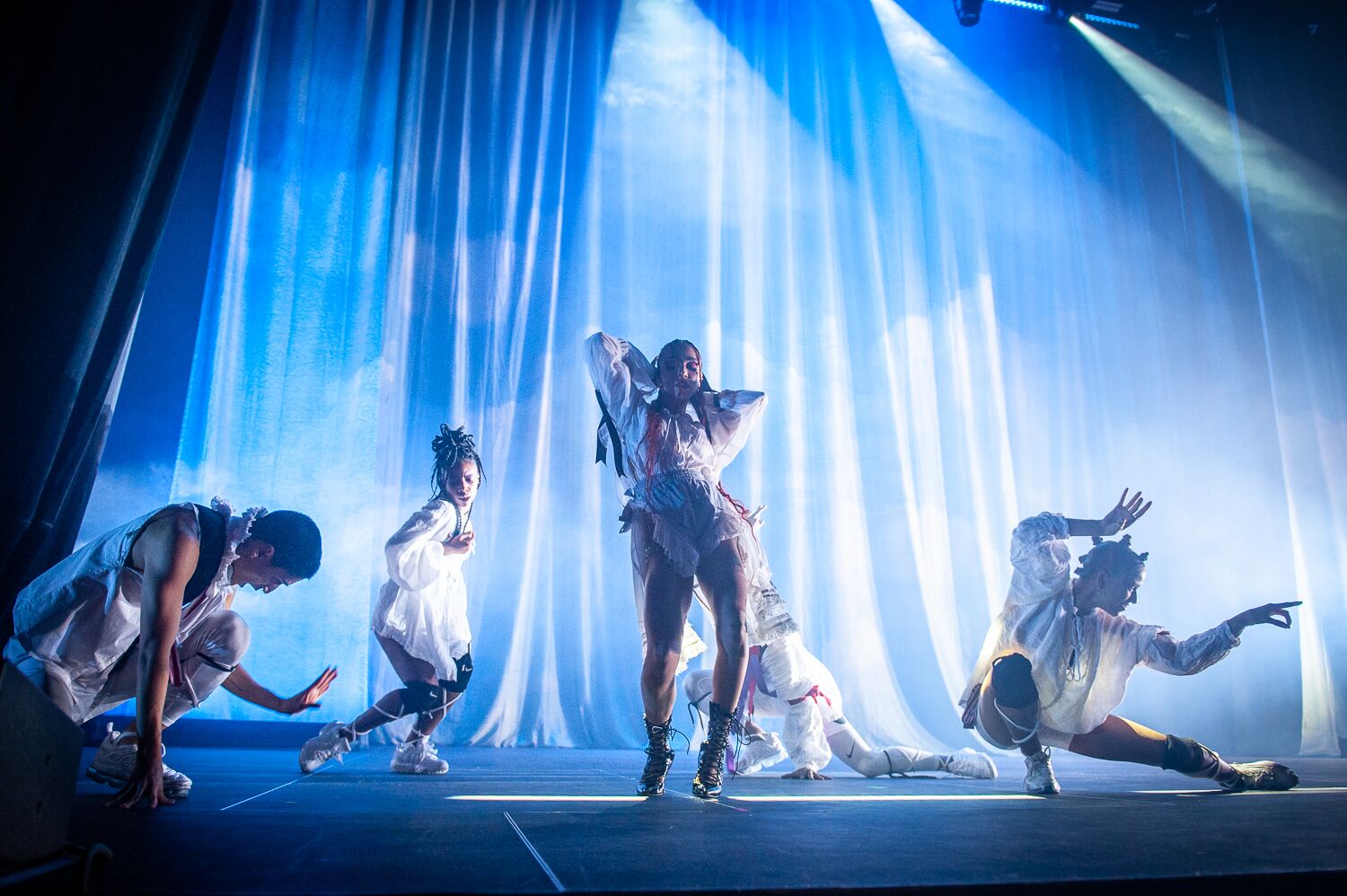 No openers were needed as a precursor to FKA twigs. Although the wait was daunting, a full hour after the scheduled showtime, hopes remained high that the reward would outweigh the elapsed time. Artificial orchestral movements shifted through the dark, growing louder and softer as the wait intensified. When the nine o’clock hour struck and the intro to “mary magdalene” rang out  — “A woman’s work, A woman’s prerogative, A woman’s time to embrace, she must put herself first” — out stepped FKA twigs alone and vulnerable in the spotlight. Stomping and sliding to a tap-dancing routine set to a dizzying electronic beatboxed rhythm, FKA twigs basked in the rays of light until the beat subsided into the skittering “Hide.” 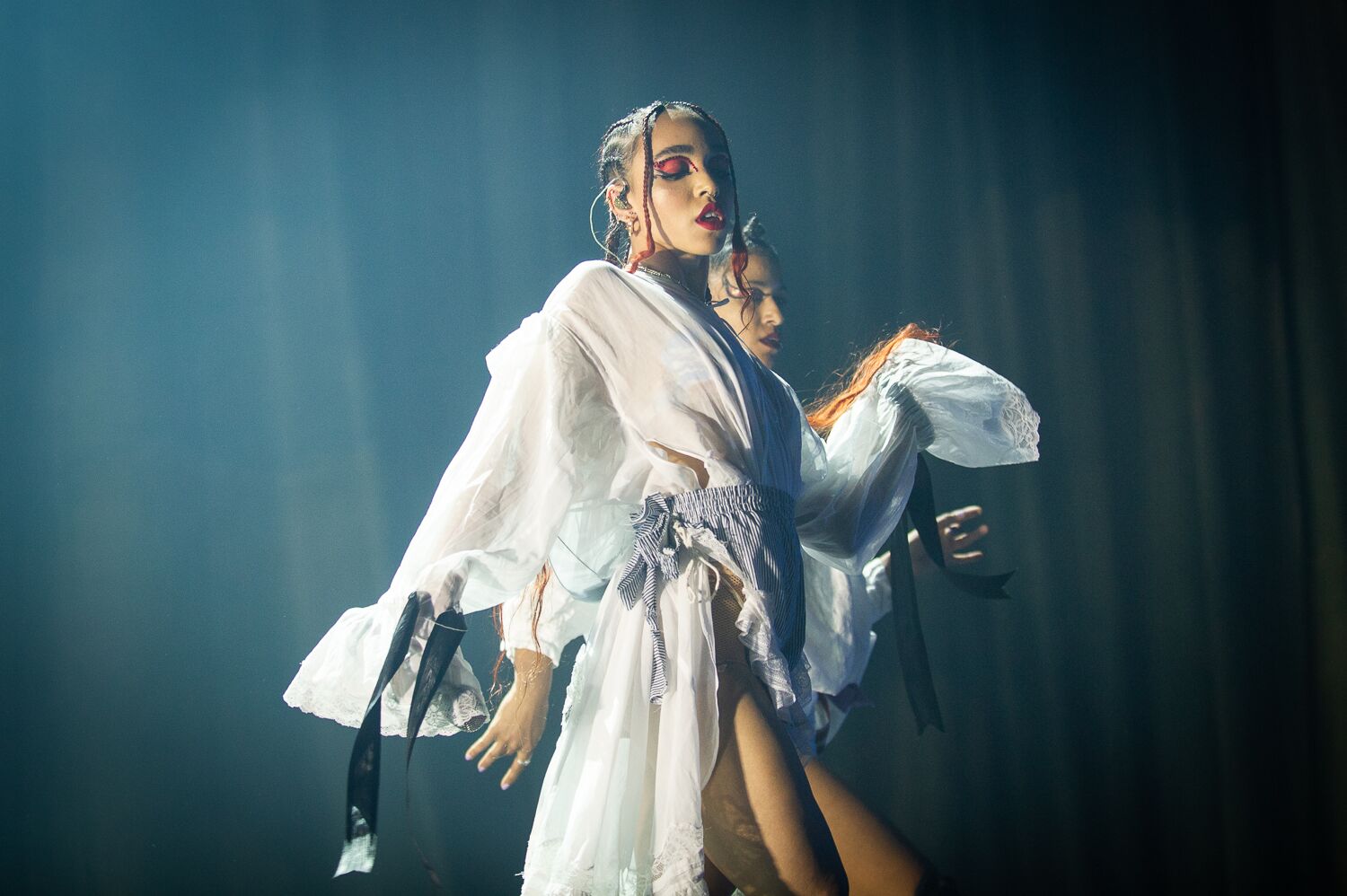 Resembling more of a play than a typical concert, the performance was almost split into acts. The first third, coming off the back of “Hide,” was much of FKA twigs early material, positioned against a backdrop of drapes resembling orange colored skies. Four back up dancers swept in, cutting through her solidarity, diving into intricate choreography with FKA twigs by their side to tracks like “Pendulum” and “Video Girl.”

The second third — led again by the same excerpt from “mary magdalene” — was indebted to the biblical figure and to FKA twigs’ newest album of the same name. Donning grand dresses comprised of flowing linens, FKA twigs withered to “home with you” as her dancers donned medieval minstrel masks. Falling before the crowd, the singer brought a man to tears singing the last bit of the title track pressed against his face, and the marvelous “sad day” exploded with a swordplay breakdown that cut the curtain away revealing a multi-level platform with her band and dancers weaving through it.

The climax, the last third of the concert, was a blow out of dramatic proportions. FKA twigs twerked and gyrated to the rapturous one-two punch of “holy terrain” and A$AP Rocky’s “Fukkk Sleep” as her voice soared over both. Asking if anyone in the audience came alone and whether anyone had had their heart broken, she proceeded to break the audience down singing a refrain of “mirrored heart” with staggering emotion. Climbing a pole centered on the stage, FKA twigs dazzled with a show-stopping pole dance routine to the tune of “Light On,” and later evaporated in a sea of red and pink confetti to her hit song, “Two Weeks.” The final number, however, with all the spectacle behind her, a stripped-back piano-laden rendition of “Cellophane” brought the house down. Pausing now and again in the needle-drop silence, letting her immaculate soprano devastate the crowd, her final stanza of “They’re waiting and hoping…I’m not enough,” drew tears from nearly everyone in attendance.

With the production, her stage presence and commitment to the show, FKA twigs’ performance at Mission Ballroom is like none other out there right now. It may take seeing to believe it, but there’s a reason she’s compared to so many avant-garde greats — she belongs there.