With over 30 years of experience in the haunted attraction industry across the nation, Michael Edwards knew exactly how to scare the lights out of people before arriving at Anderson Farms and taking on his role with the popular Terror in the Corn attraction. His illustrious history includes managing, acting for and building sets for Haunted Verdun Manor (now Thrillvania), Screams Haunted Theme Park, The Haunt House (now Phobius), Dark Hour and Dan’s Haunted House. He travels around the country teaching haunt acting at other attractions and in front of thousands at trade shows like Trans World and Midwest Haunters Connection.

Recently, Edwards spoke at Denver Startup Week on a panel discussing immersive and interactive events. He gave us the inside scoop on his spooky history and walks us through the actor training process, how to terrify people and his one irrational fear. 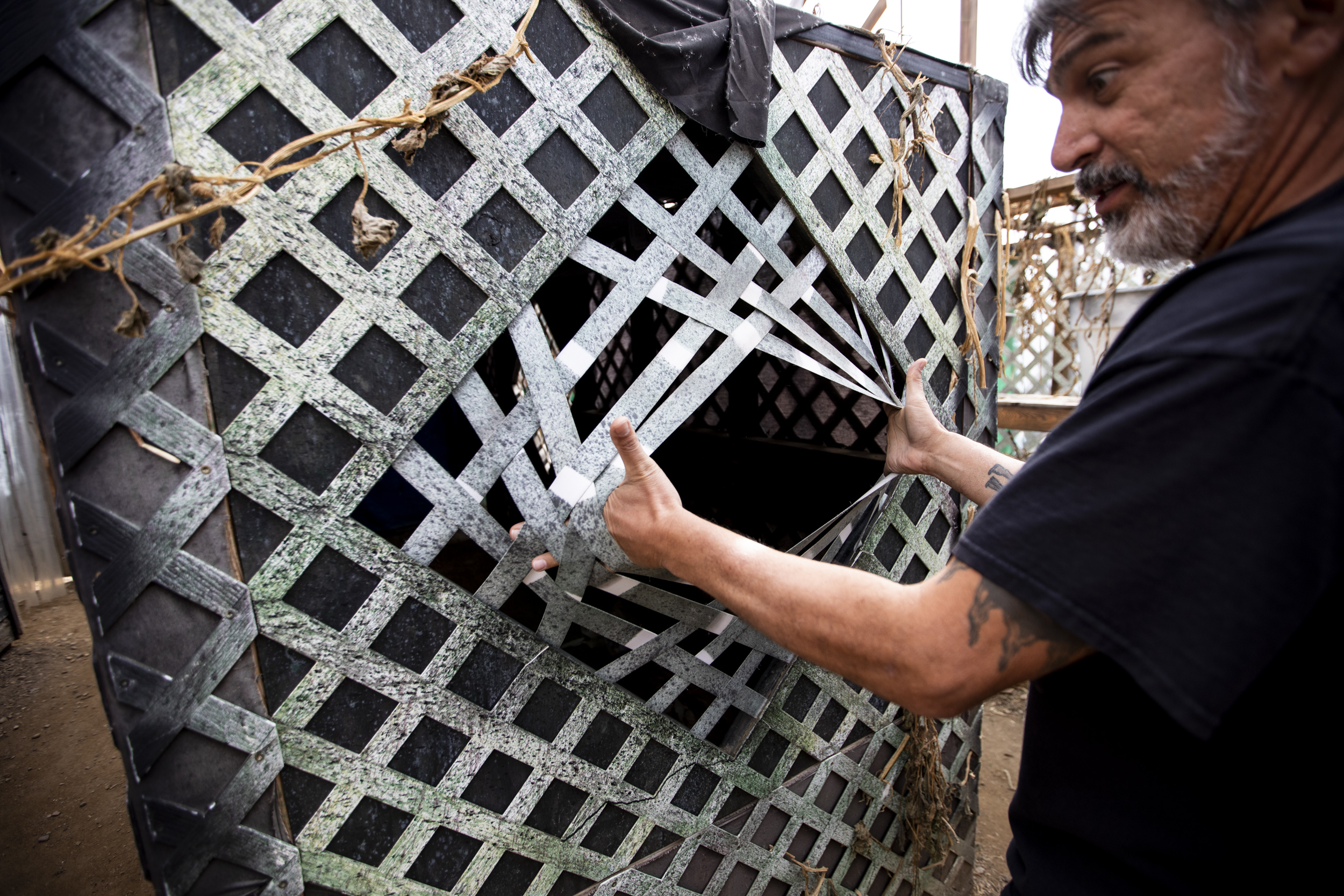 Born in Chicago and raised in Texas, Edwards lived in Texas until opportunity brought him to Colorado last year to work at Anderson Farms. “Terror in the Corn was looking for someone to take on managing the actors. I’m also the operational manager for the haunt,” Edwards explained. “They made me an offer I couldn’t refuse, and I convinced my family we needed to move out of Texas.”

Though Edwards initially spent 23 years in the record management industry while doing horror on the side, it was an interest from a young age. “I had always been attracted to horror and scary stuff. I did a lot of acting and theater when I was younger. I watched Dark Shadows with my parents as a kid. I had my own haunted house in my house when I was seven.” 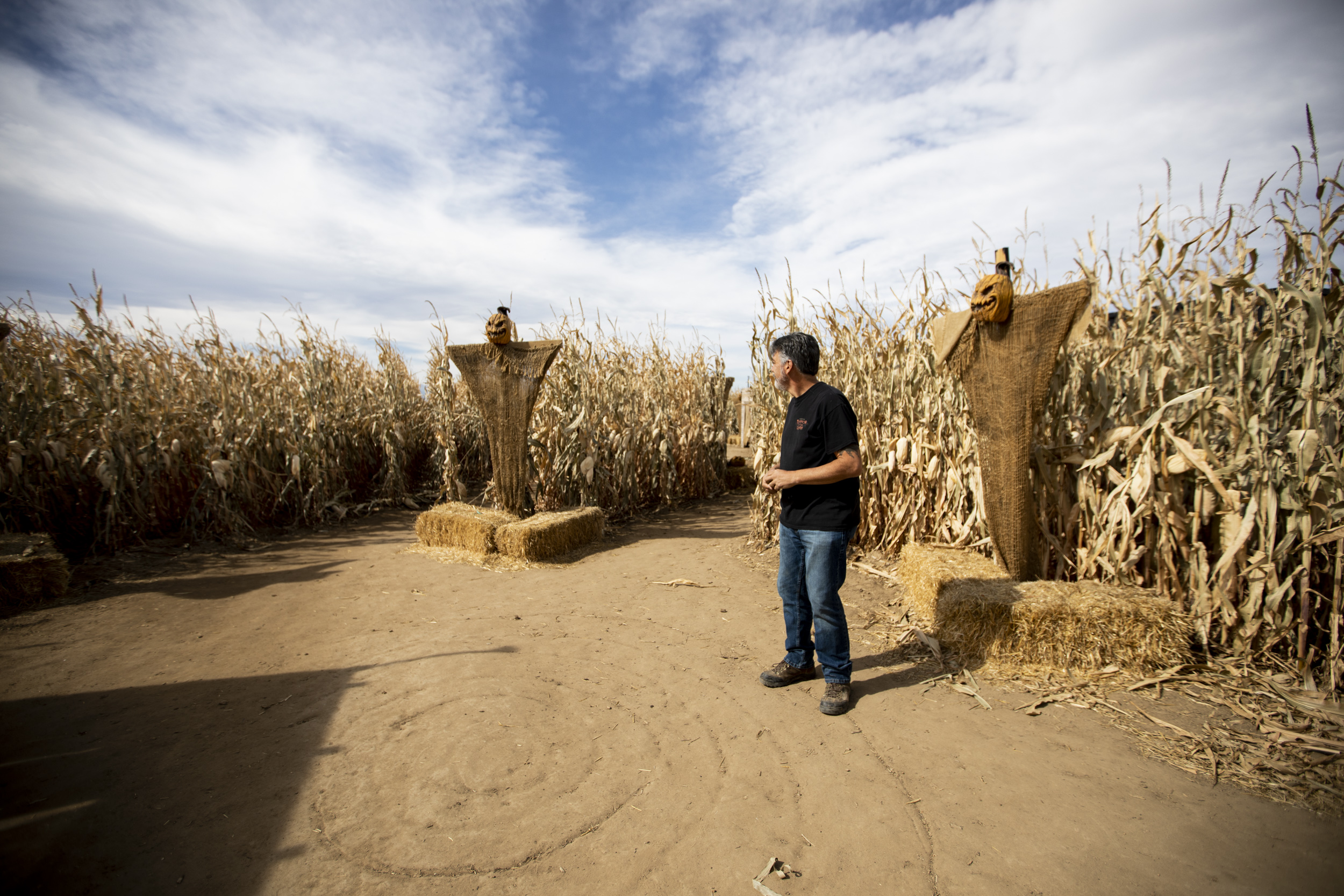 In high school, Edwards spent two years creating haunted houses for his work with the March of Dimes. In 1989, he went on to meet a man named Lance Pope with the haunted Verdun Manor in Forney, Texas. “He pretty much changed my life,” Edwards explained. “He offered me an opportunity to come out and see what kind of work they did. I showed up, and within a few months, quit my job and started haunting full time for about three years.”

Since then, he has racked up over 30 years of experience in the horror attraction industry. “After I left there, I went back into the work arena and only did it on nights and weekends for Screams, The Haunt House, Dark Hour and a bunch of different haunts in Texas. When they offered me the position here, it was an opportunity to leave the corporate world behind and do this full time, which is what I’ve been trying to do for the last 30 years,” he said. 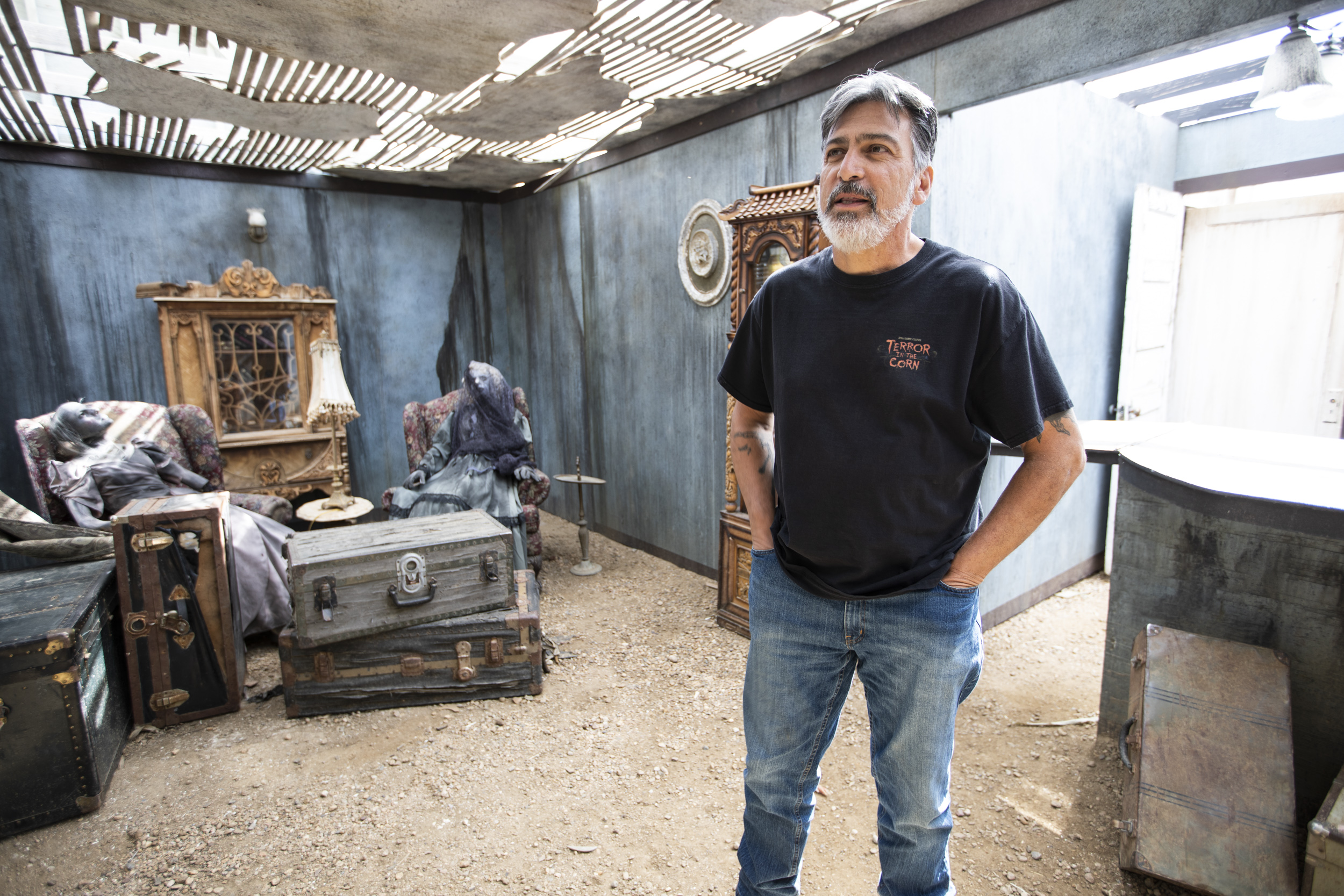 Edwards jokes that he doesn’t have many friends outside of the haunted attraction industry. In fact, he even met his wife, Sally, at Screams in Waxahachie, Texas where he was working in 1994. Since, his work has become a bit of a family affair. With his wife now working in the main office, Edwards’ 16-year-old daughter, Sarah is one of the makeup artists for Terror in the Corn.

“She’s loving it,” Edwards said of his daughter. “She’s been acting with me at haunts since she was four. I love having [my family] here and working with me.” 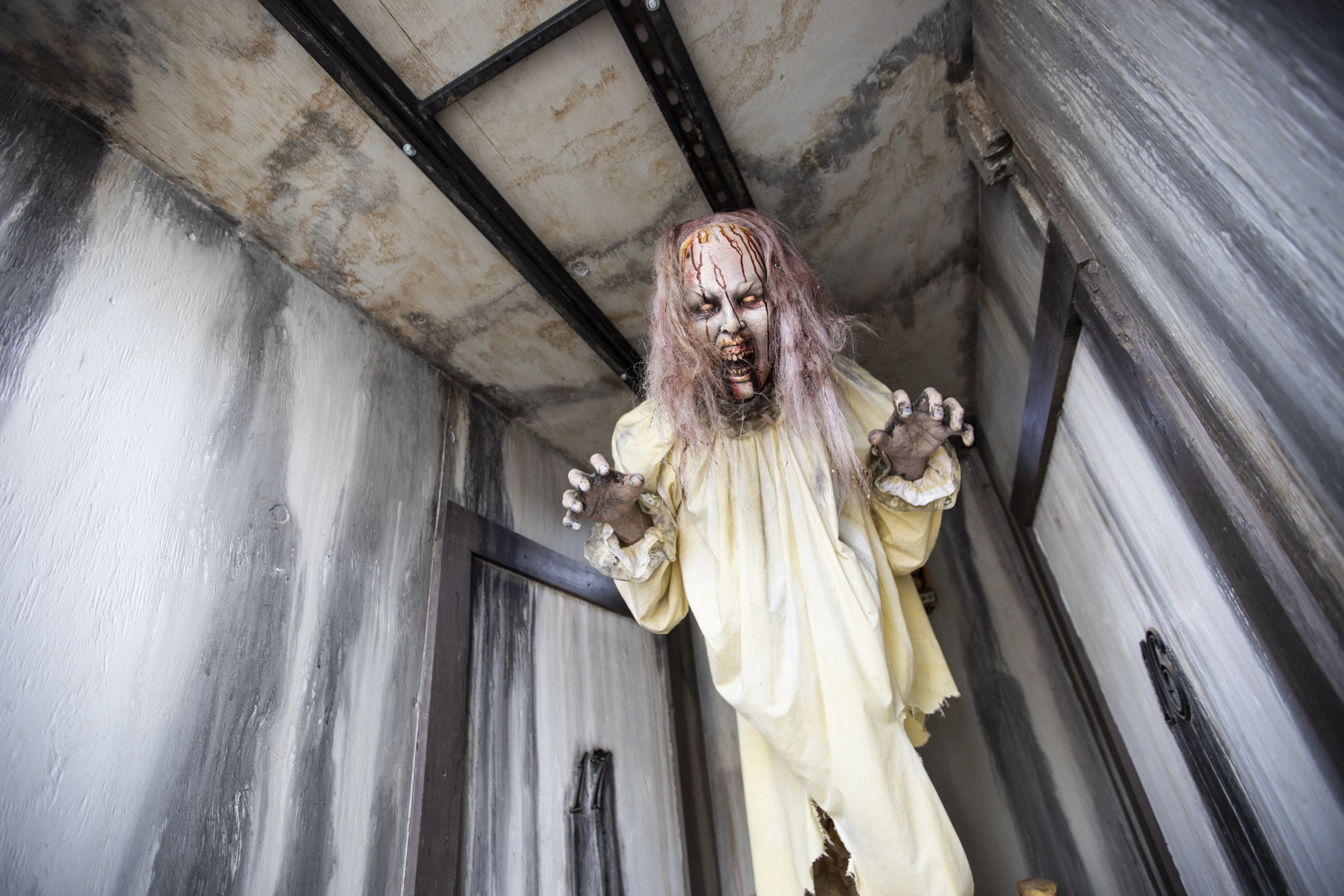 Now at Terror in the Corn, Edwards and his team have been hard at work putting together the attraction for the past year. “It’s kind of a crazy deal. We start pretty much the day after we close for the season,” he explained. “So, we closed for 2018, and then the next day, we were already sitting down and planning, drawing and sketching. We were deciding what’s going to come out of the haunt, what we’re going to tear down and what we’re going to build new.”

After getting everything down on paper during the cold months, Edwards and his team go out as soon as the weather permits to clear the ground and start laying down marks for walls. He revealed that the building process takes so long that they’ll often be putting the final touches on opening day. 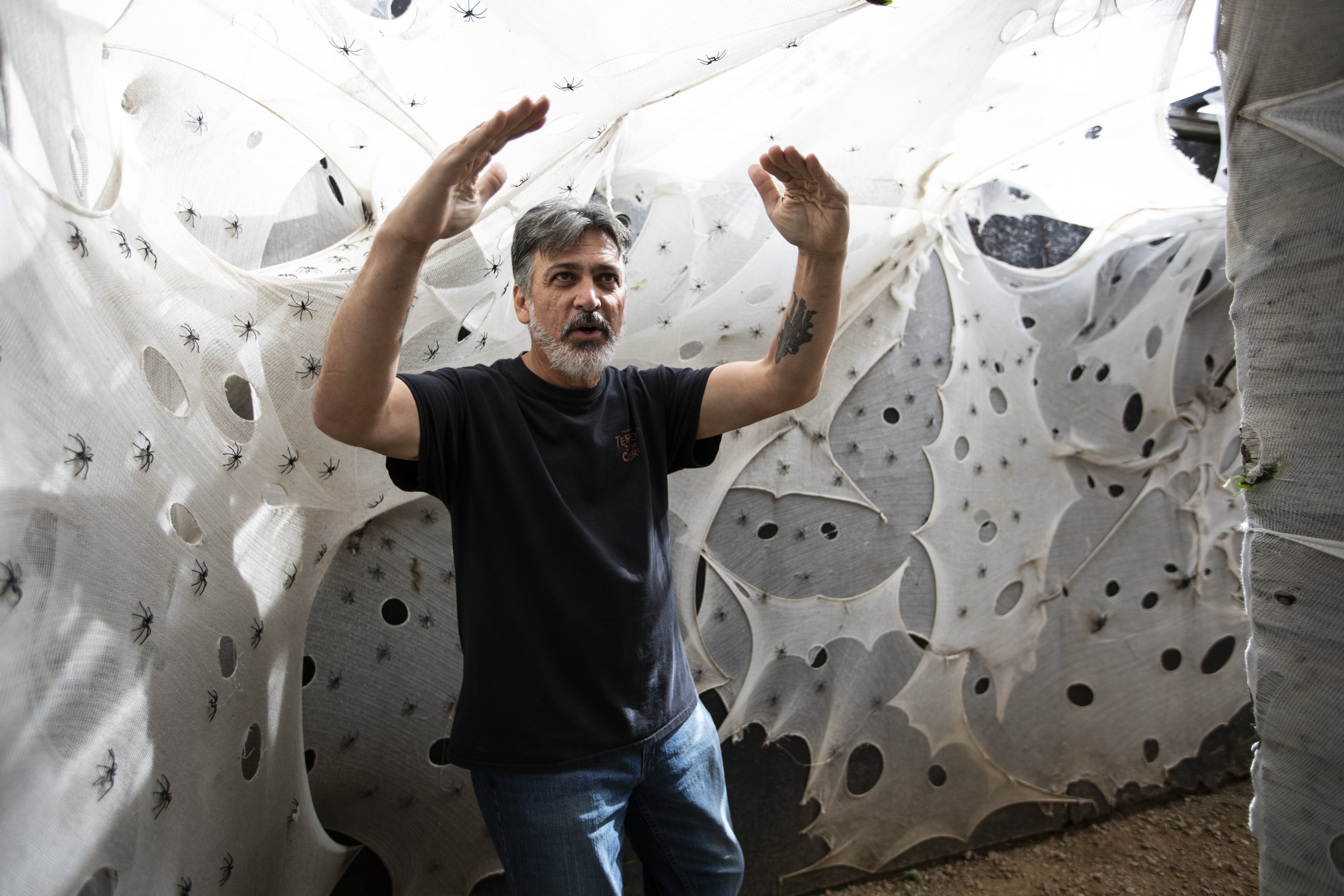 “Come July, I start putting the word out that we’re looking for actors,” he said. “I’ll spend about three or four weeks doing group auditions and then doing one-off auditions. In early September, I do two days of training where we do a bunch of really weird, crazy and bizarre exercises to get people out of their shells. In order to be a successful haunt actor, you just have to be willing to look stupid.”

A good portion of the actors are in high school and are around 16 or above, but Terror in the Corn also hosts plenty of actors who are up to 50 and 60 years old. The exercises Edwards guides them through ultimately help flesh out body language, posture, movement and voice for when the actors build their characters. 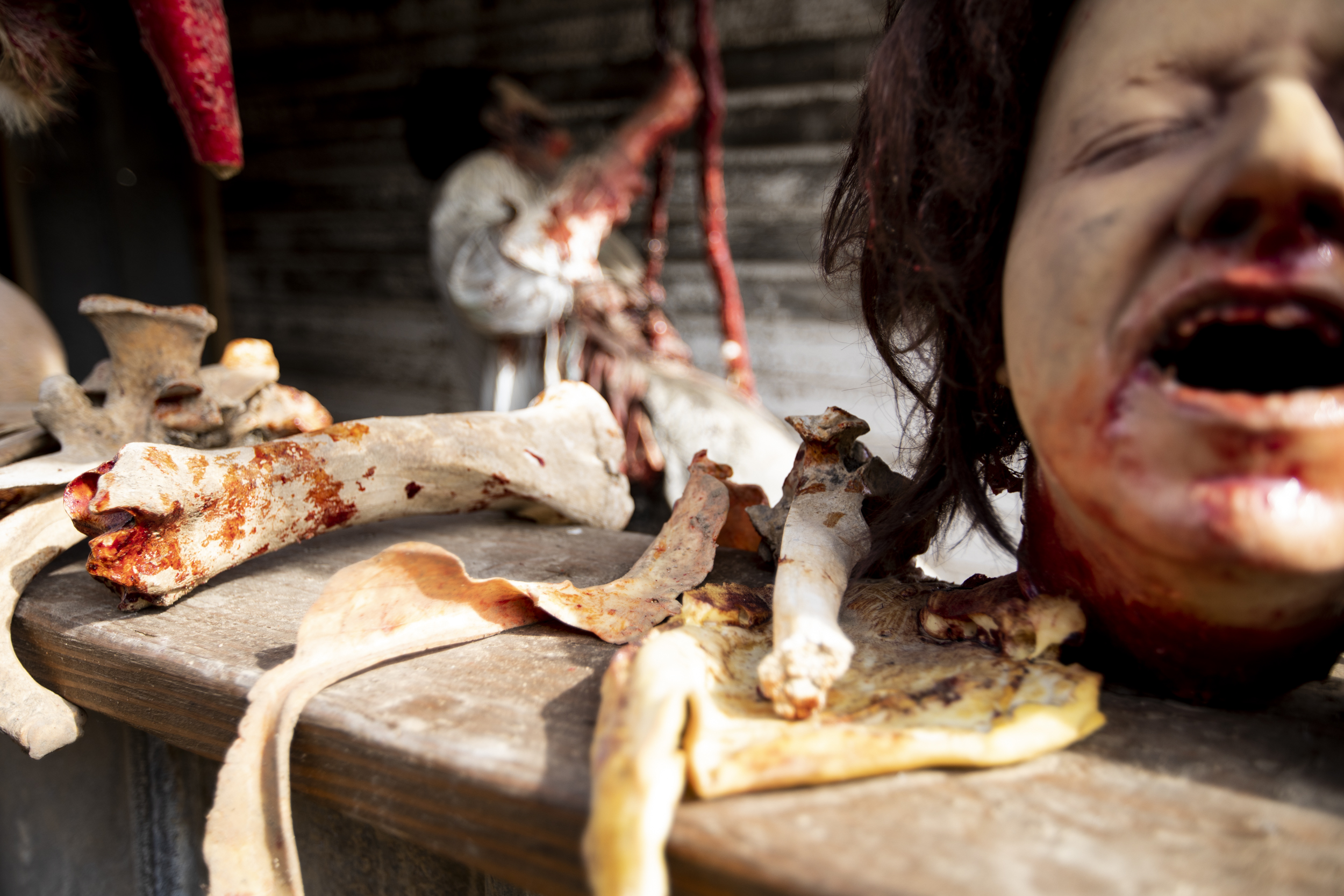 Edwards’ approach to training lies in storytelling. “We create the characters, but I ask the actors to write a backstory for their character. That puts them in the character. I’ll have them start writing stories about why they’re here, what happened to them and why they became what they are. I’ve been doing that for years at different haunts. It helps invest them in those characters,” he explained.

In fact, Edwards has built his own character that he’s been playing for over a decade that you might catch a glimpse of. “I’ve got a character I’ll play here two nights out of the season when it’s the least busy,” he said. “He’s called the Ringmaster, and he’s a character I created 11 or 12 years ago when I worked at The Haunt House. That character’s actually gotten a lot of national attention, so I’ve also done that character at Dark Hour and here.” 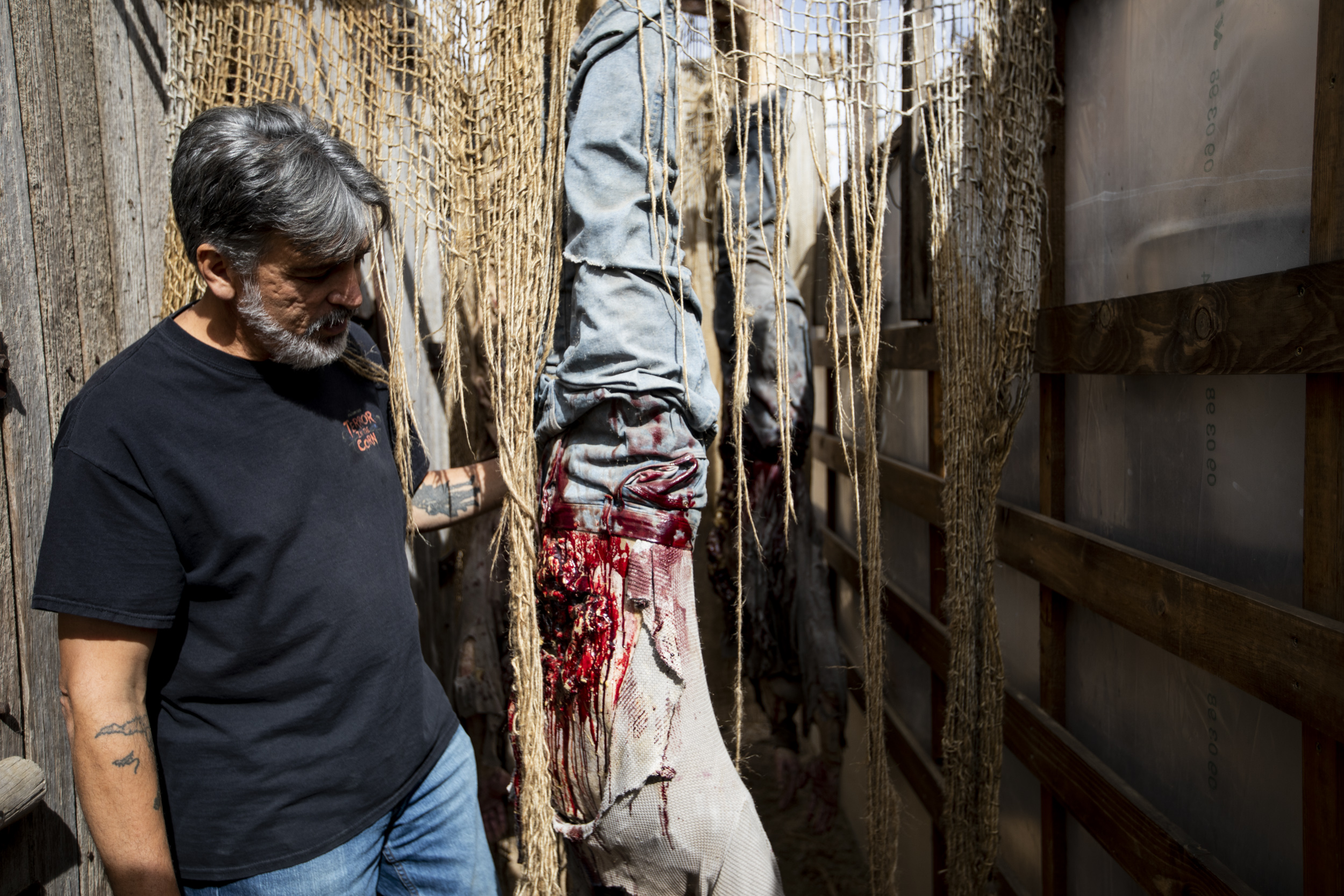 Edwards credits his love of working with actors as part of the reason he has been so invested in this industry. “Their enthusiasm is so fun, especially new people who have never done anything like this before. Probably half of our actors haven’t done anything like this before. I’m very enthusiastic when we train, and I’m kind of a cheerleader when we train. My job is to impart them with the enthusiasm and instill it in them. When I see it coming back from them and having fun, I’ve succeeded.”

Once actor training is complete and it’s about two weeks before opening, they start putting all the finishing touches up. “We ask for some actors to come and help set up, getting fences up, queue lines up, props up, and pretty much get ready for opening day,” Edwards said. 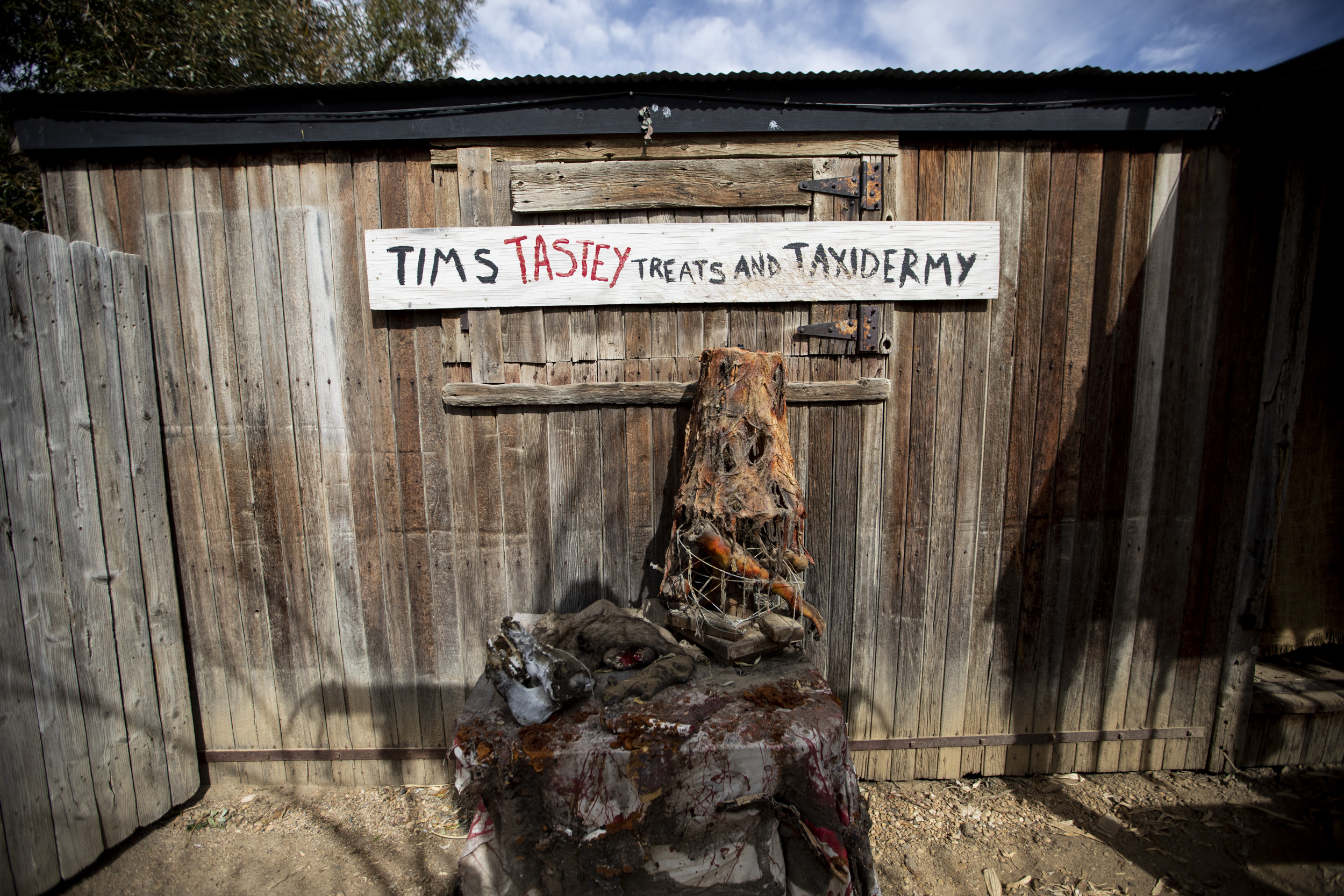 With a team of 91 people, Terror in the Corn has been designed with every nightmarish fear that’s sure to terrify you this Halloween. So what makes a haunt actually scary? 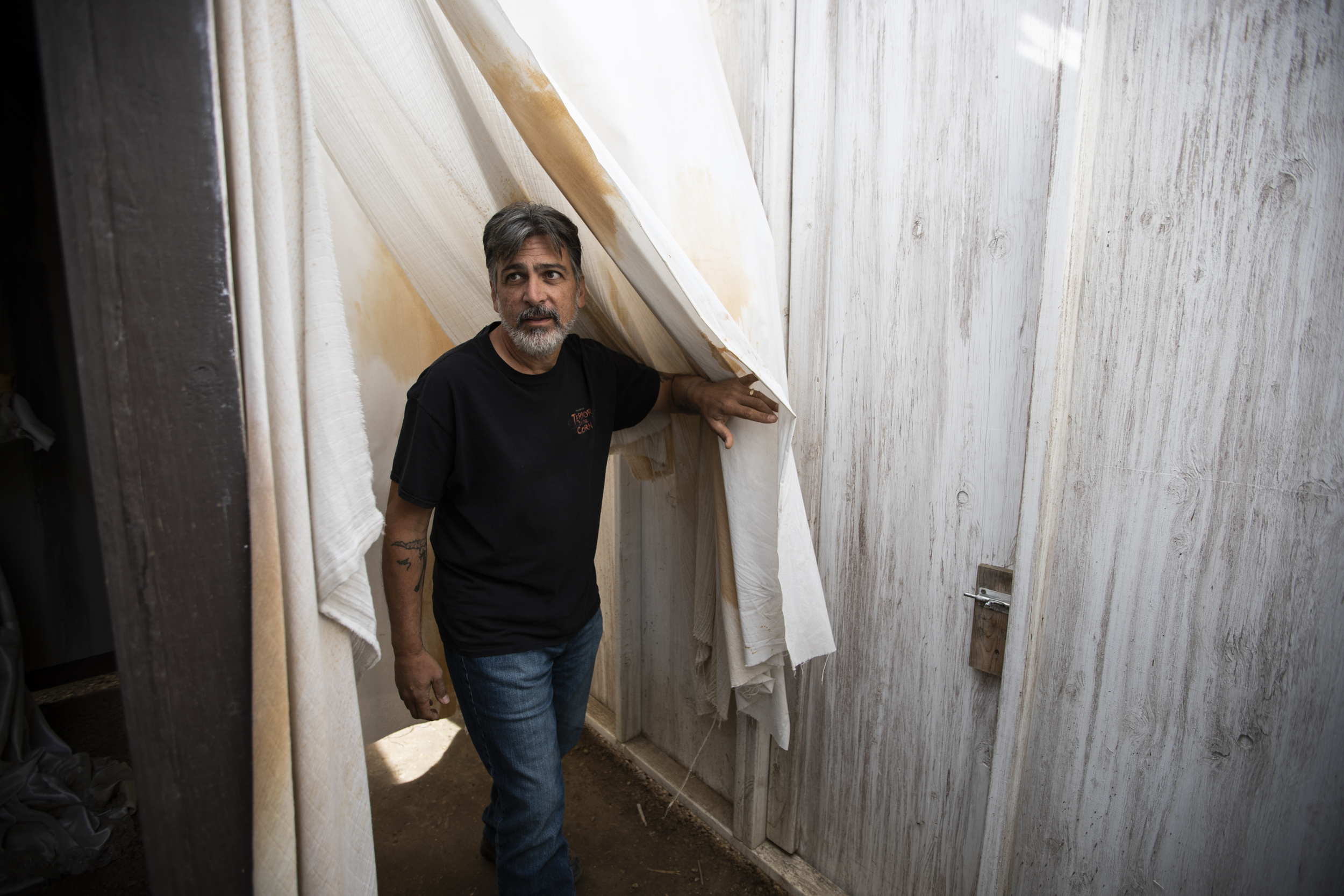 While fully knowing that they might not be able to scare everyone, that doesn’t stop them from doing a spine-tingling job. “We’ll show our actors how to do everything from a startle scare— where they jump out suddenly or say something to surprise— to saying things that are kind of disturbing or disgusting to give it a little bit of a reaction,” Edwards said. “Since I tell them we can’t scare everyone, I give them the flexibility to be kind of funny. If somebody says something stupid to them, feel free to say something stupid right back as long as you stay in character. If you make them laugh or you’ve caught them off guard, you’ve still entertained them whether you’ve scared them at all.”

Edwards’ favorite attraction in the country is 13th Gate in Louisiana, which he lauds for being a grand show with big, brash elements, stunning attention to detail and exceptional actors. However, Terror in the Corn takes a slightly different, yet possibly more terrifying, approach than what people might be used to. “A lot of haunts are very brash, loud and in your face with loud music. Ours is a lot quieter. The only sounds you’ll find in the haunt are sounds that should be there, and we don’t overpower you with them. We let the actors do their thing. It’s a different style, but people seem to like it a lot.” 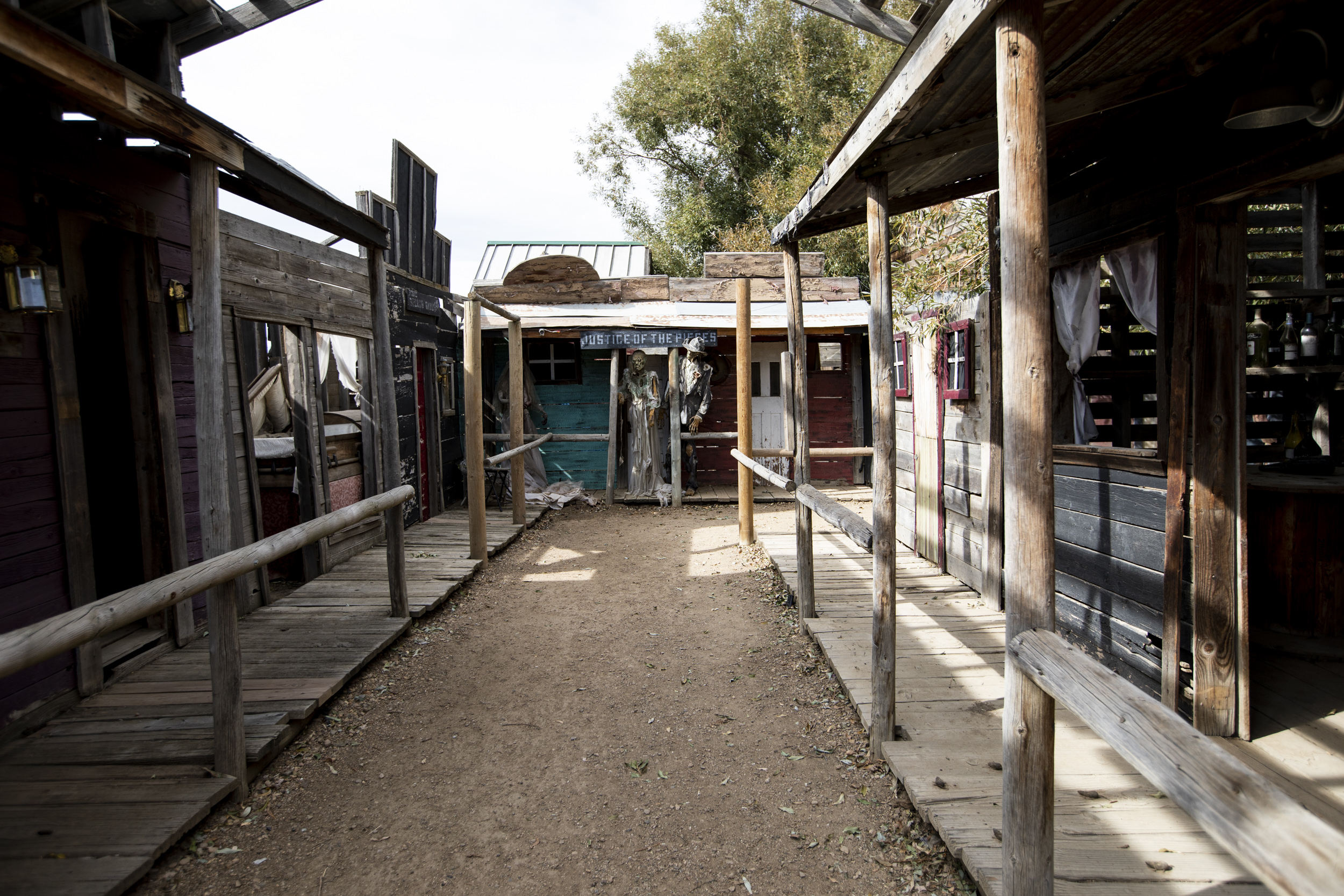 When asked if anything still scares him at this point, Edwards assured us that he has plenty of fears. “I’m still not a big fan of spiders. If it comes at me with a knife or touches me, I don’t like it. I’m not a fan of heights. I’ll share that I have a fear that’s an irrational fear. My one irrational fear is zombies. I’m not talking a guy in a costume or a guy in makeup. In that one in a billion chance that there was ever actually a zombie apocalypse, I’d be the guy in the corner cowering and crying in the fetal position. The thought of it terrifies me, but I know it’ll never happen.” 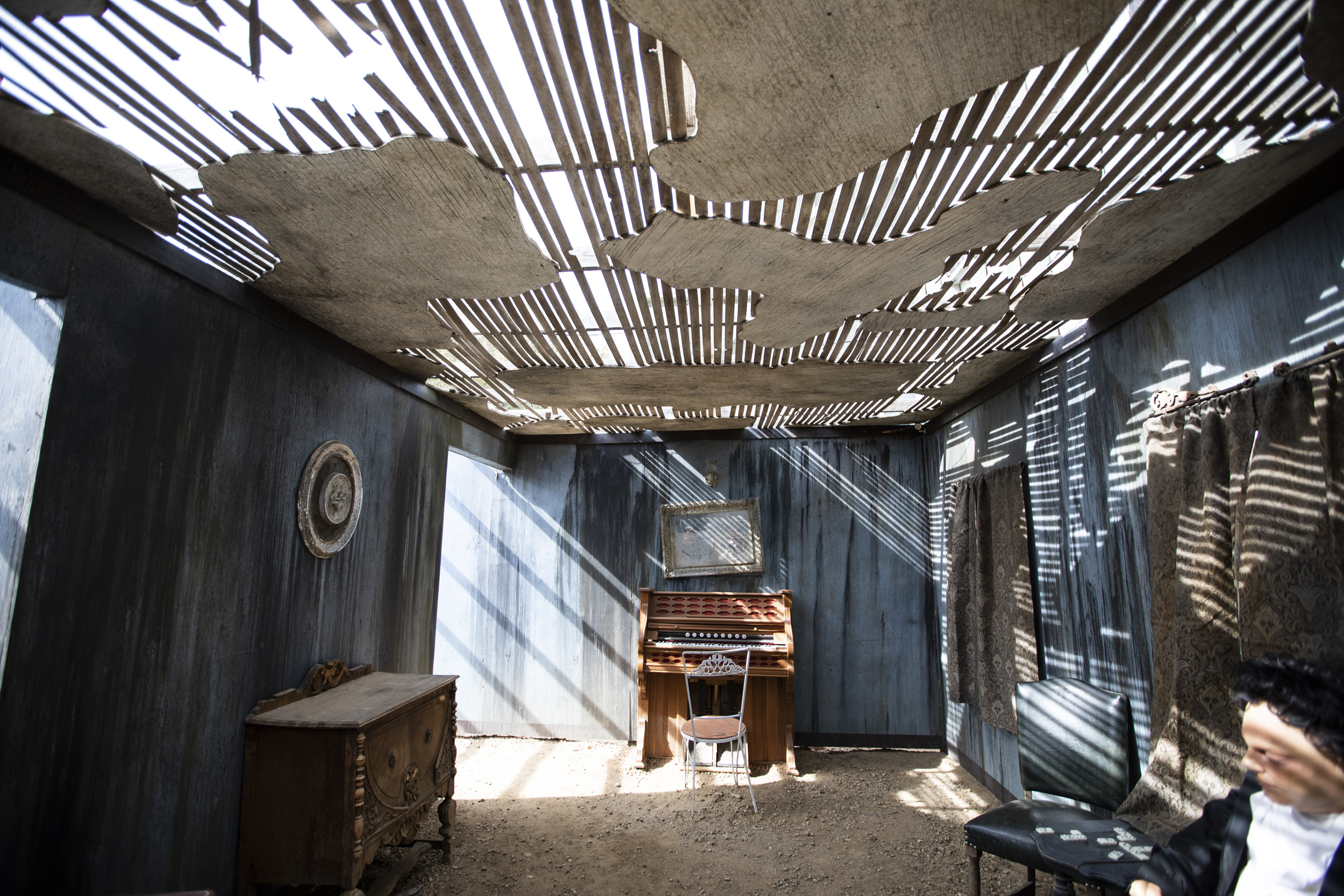 While no zombies will make an appearance in Terror in the Corn, visitors can look forward to encounters with a host of plenty of other ghouls. If you plan on visiting, keep an eye out for werewolves swiping at your feet and plenty of screams. Not everything is as it seems.

You can find more information about Terror in the Corn here.