During the earlier years of this decade, the Welsh-Greek DIY-pop artist Marina Diamandis made a name for herself singing about self-obsession and celebrity culture while masquerading as a hedonistic 21st century material girl. (She also made a name for herself literally, having operated under the title “Marina + the Diamonds” for her first three LPs.) The intentionally hallow sentiment of some of her songs — and her tongue-and-cheek delivery of them — incites intrigue. Is she being ironic? Hypocritical? These are precisely the questions the witty, epigrammatic artist wants us to ask.

Recently, though, Diamandis left us wondering in other ways. With the exception of a few projects — like her collaboration with Clean Bandit for the 2018 single, “Baby” — she’s been out of the public eye since 2015. The demanding tours and promotional campaigns for her previous albums — Electra Heart and Froot — left her burnt out and unsure if she’d ever return to music. Luckily, this hiatus came to an end earlier this year with the release of her fourth full-length album, Love + Fear, on April 26, and her embarkment on the tour of the same name only days later. The tour came through Denver’s Mission Ballroom on the night of September 30. 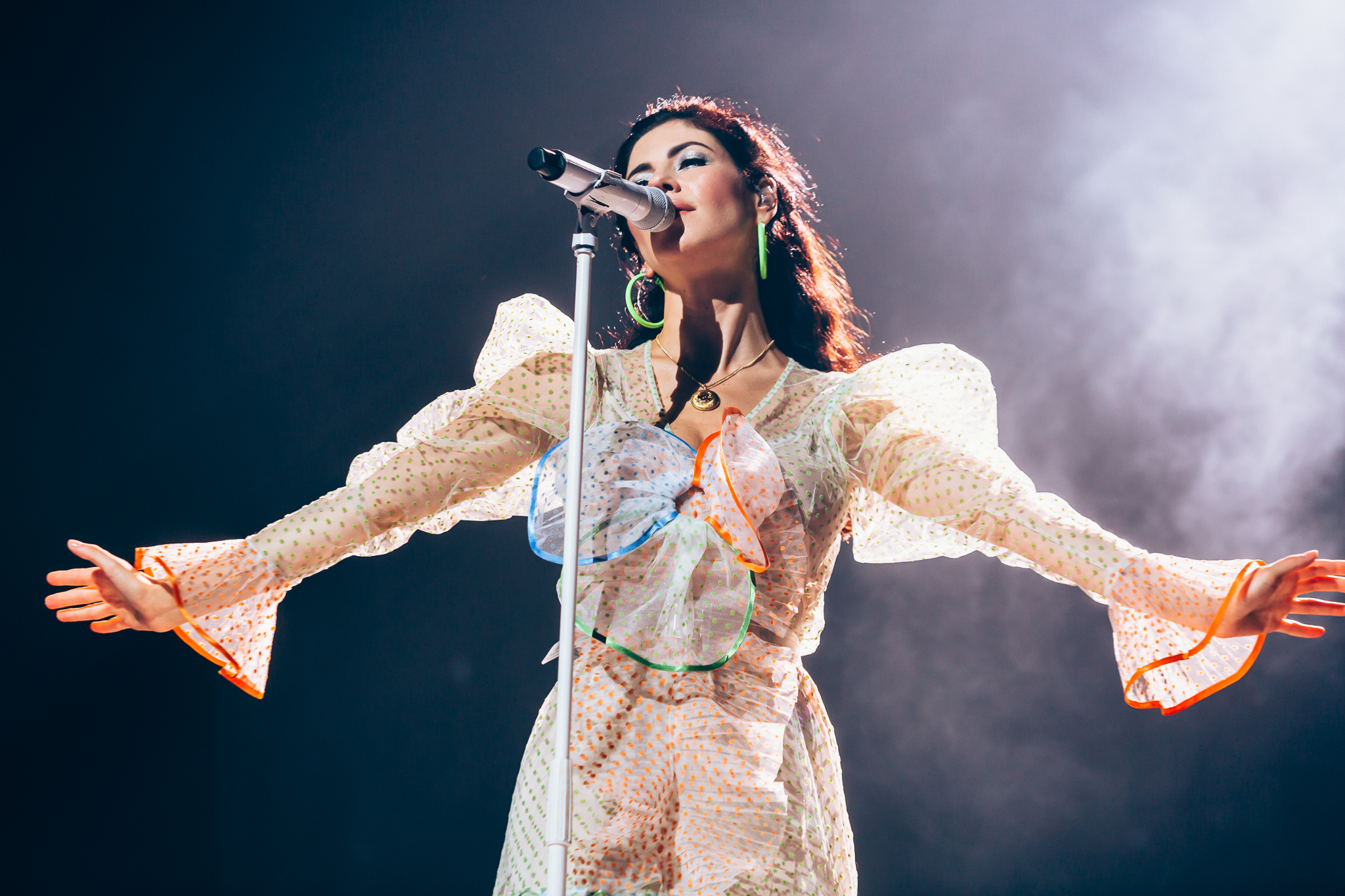 Circumstance awarded neither the artist nor the audience with optimal concert conditions — let’s just say the venue wasn’t packed on a Monday night, and Marina admitted to having a cold. In spite of all this, Marina — who now has ditched the Diamonds and performs as MARINA — gave a gorgeous concert. The devoted (and “chatty”, as Marina remarked onstage) fans were more than happy to meet her halfway.

Kicking the evening off were Broods, an electro-pop musical duo from New Zealand, whose camp fashion sense — modified short-sleeve coveralls and orange GloWear booty shorts — got us in the mood for Marina as much as their music did. Their vocalist, Georgia Josiena Nott, later joined Marina onstage to sing “Emotional Machine” — a song they wrote together — but a better showcase of Brood’s sound is their own song, “Every Time You Go”. Their live rendition of it was both quirky and soul-stirring. 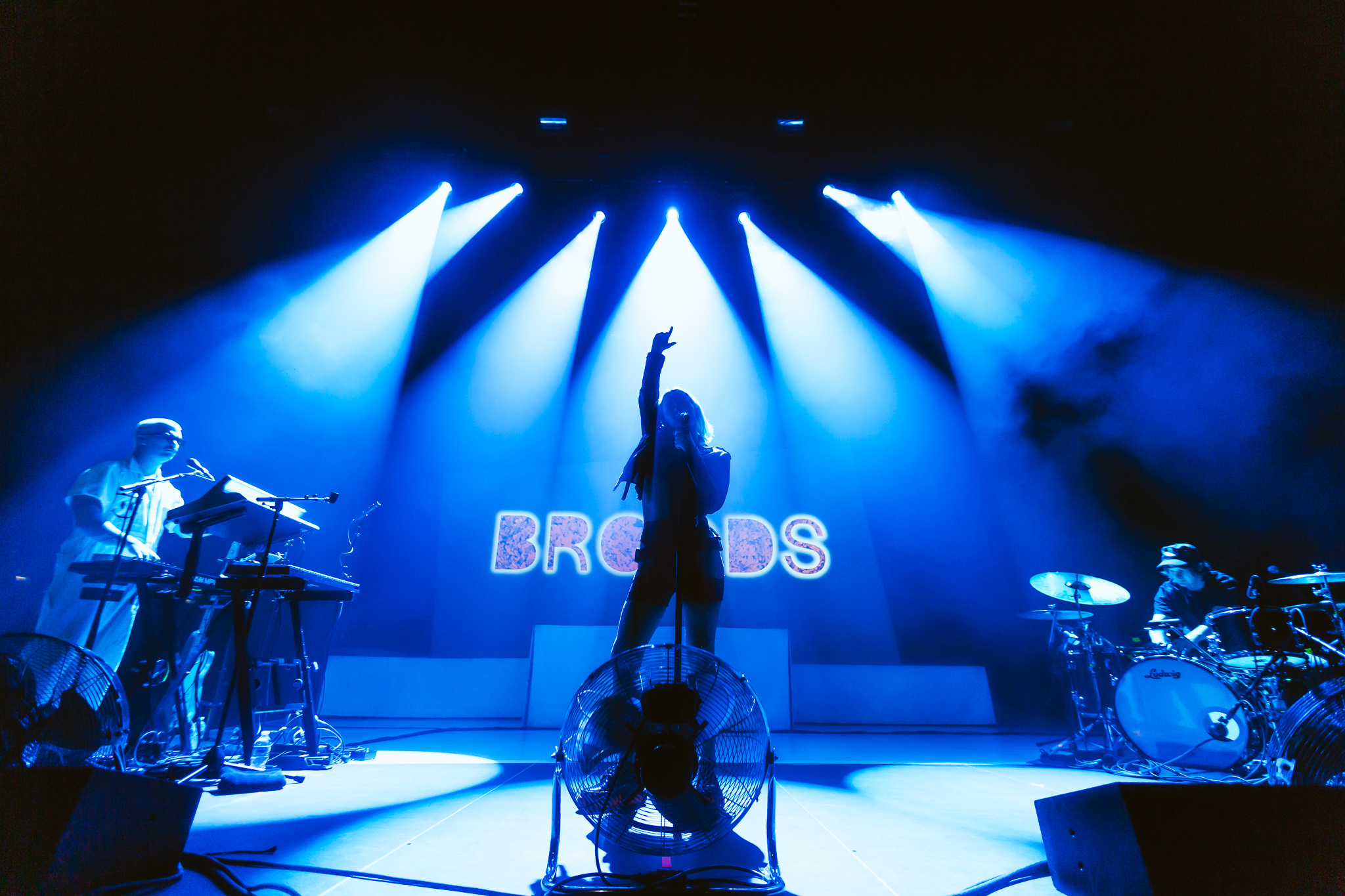 At 9 p.m. Marina took the stage with the measured pace and ethereal constitution of a bride. Like the Love + Fear album, the “Love + Fear Tour” was split into two halves, each tackling one of the two dichotomous emotions. Conceptually, Marina built on psychologist Elisabeth Kübler-Ross’ theory that love and fear are mutually exclusive. As follows, Marina defines love as the absence of fear and vice versa.

The first act began with songs that present an optimistic spin on existential nihilism, such as “Handmade Heaven”, and, of course, the 2012 single, “Primadonna”. For the presentation of this song, Marina’s two dancers each stood behind a standup microphone in line with her and her backup singers. This illusion — the dancers weren’t singing, but no doubt they were performing — functioned as a striking visual commentary on authenticity as it relates to music celebrities. Do we buy a concert ticket for the music, or the person? How much posturing makes up a musical “act”? Suffice to say, this was both an intellectually and visually engaging number. 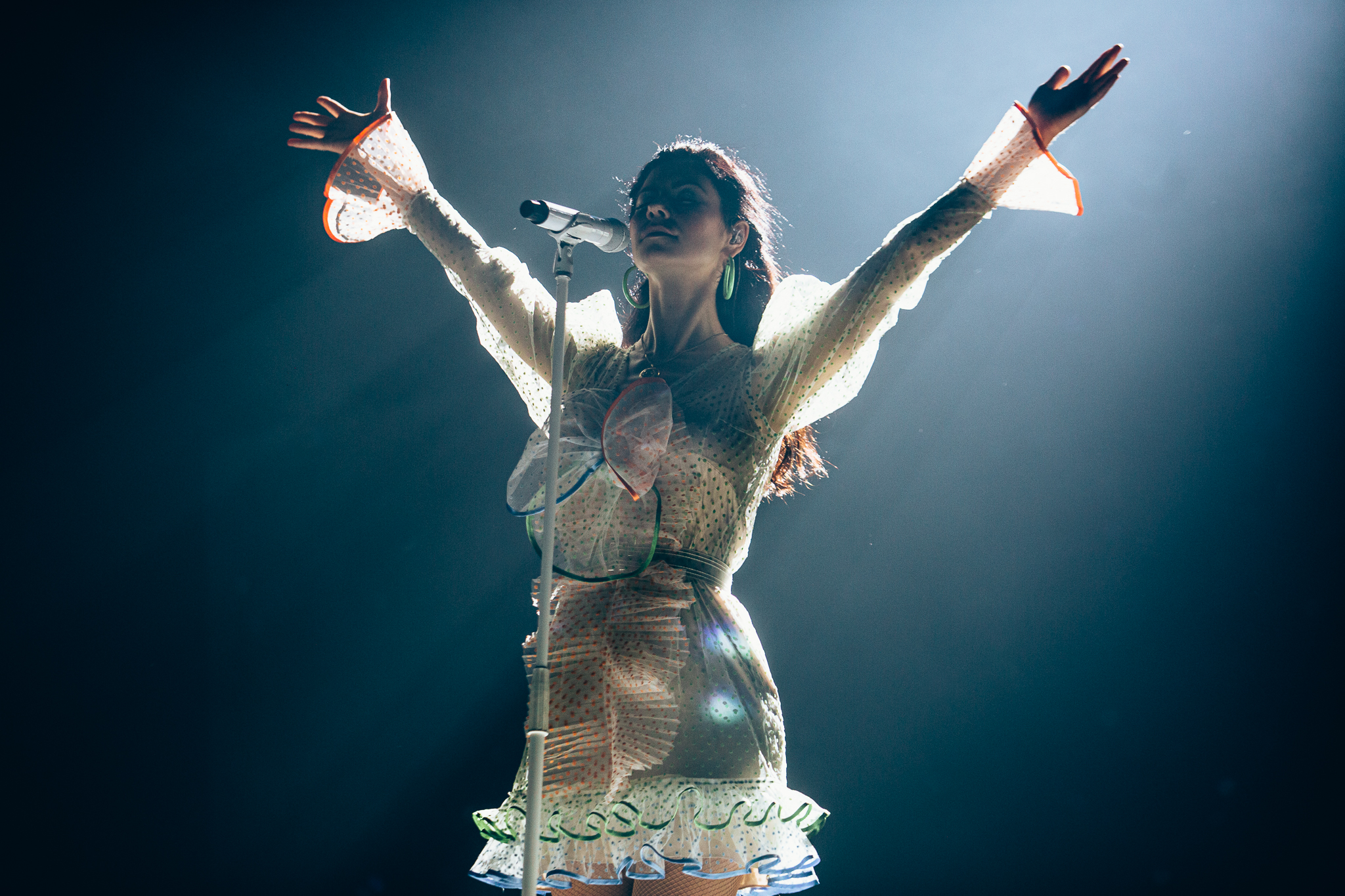 The next handful of songs progressed thematically from reveling in artifice to learning how to feel real. The timelessly quirky 2010 hit, “I Am Not a Robot” preceded her new song, “To Be Human”, which released along with a music video in April. The video played on the large tilted backdrop screen as Marina serenaded the audience. It contains footage from various moments in history united by their call for humanism and social activism — the fallout of Hiroshima, #BlackLivesMatter and pride parades are just a few of many featured examples. The symbolic significance of Marina holding hands with her black backup singer and raising their raised fists into the air did not go unnoticed. Nor is this gesture (or the song’s focus on human rights) unexpected from Marina — she was the headlining act the NYC pride event in June 2016 following the Orlando shooting.

The major takeaway from the rest of the night was that low-production performances are sometimes the most glamorous. The choreographed use of neon light tubes during the recital of “Froot” didn’t add much to the experience — other than a good photo op — and the backing track employed in lieu of live musicians sometimes disagreed rhythmically with Marina and her sole onstage accompanist.

On the other hand, Marina’s acoustic performance of “I’m Not Hungry Anymore” was sublime. With just her own piano skills backing her, the artist’s vocals were arguably the best they’ve been, rivaling even her studio performances. The absence of other instrumental sounds coupled with her crisp enunciation made it so that you could understand every single word she sang — an all too rare concert experience. The wavering and slightly coarse timbre of her voice on some of the lower notes — an effect of her feeling under the weather — actually complimented introspective lyrics quite well, too. 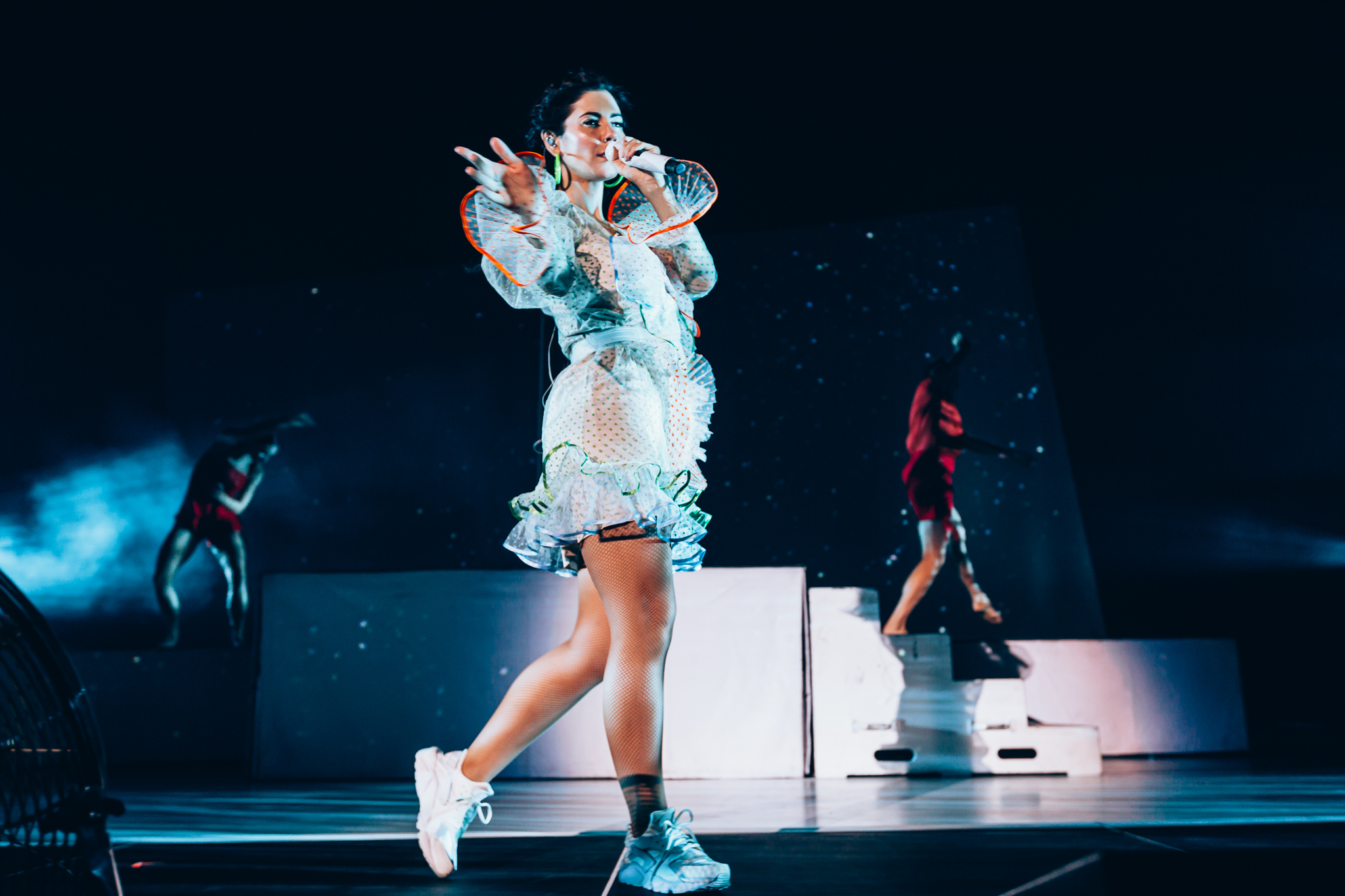 “I’m Not Hungry Anymore” is an unreleased song that never got the production to make it on the Froot album, but Marina added it to the setlist recently, saying “fans seem to love it”. Quick on the uptake, Marina recognized her fans’ appetite for her more unembellished creations and released an acoustic EP version of Love + Fear on September 13.

Overall, Marina gave her steadfast Denver following a well-structured show that oscillated between heartfelt melodies and energizing glam-rock inspired ballads. She also did it all with simultaneous warmth and cheekiness. To top it all off, she ended the night with a wink and a coy delivery of the marvelously apt lyric from her 2012 song, “How to Be a Heartbreaker” — “I love you… At least I think I do!”