It’s been a while since The Black Keys dominated the airwaves with their brazen bare-bones rock n’ roll. The bluesy garage rockers turned arena spectacle have lied dormant in recent years as the music landscape changed around them, opting to go on hiatus and pursue side projects while their namesake moniker gathered a fair amount of dust. In the five years since 2014’s Turn Blue, rock music looks and sounds vastly different than when The Black Keys stood at the atop its contemporary paradigm. Enter acts like Imagine Dragons, Twenty-One Pilots and Greta Van Fleet — even Post Malone after a couple of Bud Lights and a loss of discretion. There’s no question that the paradigm has shifted drastically, and not in The Black Keys favor, unfortunately. People just don’t rock out like they used to.

Thus, when it was announced that The Black Keys would essentially pick up where they left off, releasing their newest record Let’s Rock, and charting out the aptly titled tour of the same name, the trepidation was decidedly palpable. Though a little hesitant at times, The Black Keys came through the cut with a performance that repositioned the band squarely in rock n’ roll’s contemporary hierarchy — bucking the trends and bolstering their claim to the top. 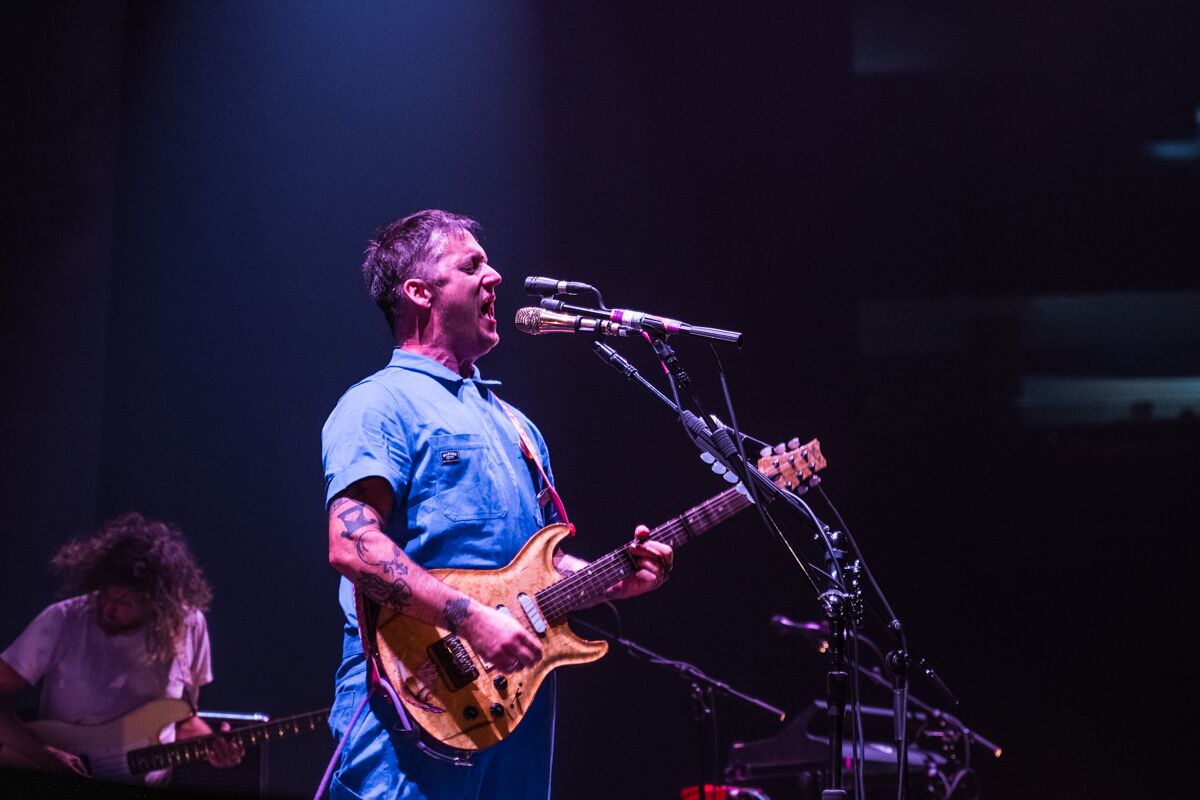 Early comers to the Pepsi Center were treated to the sounds of Nashville-based husband and wife duo, *repeat repeat. Existing somewhere between the neurotic discord of a River Cuomo with the reedy inflections of Phil Collins with a surprising fortitude for heaviness, *repeat repeat were a fresh aperitif to the night’s festivities. With the music at the forefront and their unabashed enthusiasm propelling their set (even after driving 25 hours from Nashville), the band garnered quick praise for what was surely their first arena opening gig.

Following in timely succession, veteran indie rockers Modest Mouse picked up after *repeat repeat — only to fumble it all in devastating fashion. It began with Isaac Brock’s prison garb blue jumpsuit and ended with what can only be described as an ambulance siren distorting as it races to the scene of a car crash — the music was carnage and a cautionary tale of taking sound check seriously. Perhaps it was performance art symbolizing reckless endangerment because a Modest Mouse performance it was not.

Brock’s vocals felt like yelpy afterthoughts atop his choppy guitar playing which completely butchered a multitude of songs, but none with more vitriol than “Float On.” The band was wildly loud and disjointed and many times out of key, causing a couple of people to question whether their ears were deceiving them (they were not). The most frustrating part, however, was how relentless the episode was, offering no resolution and bringing nothing but a sea of confusion to lap up the jaws that had collectively dropped in sheer disbelief. 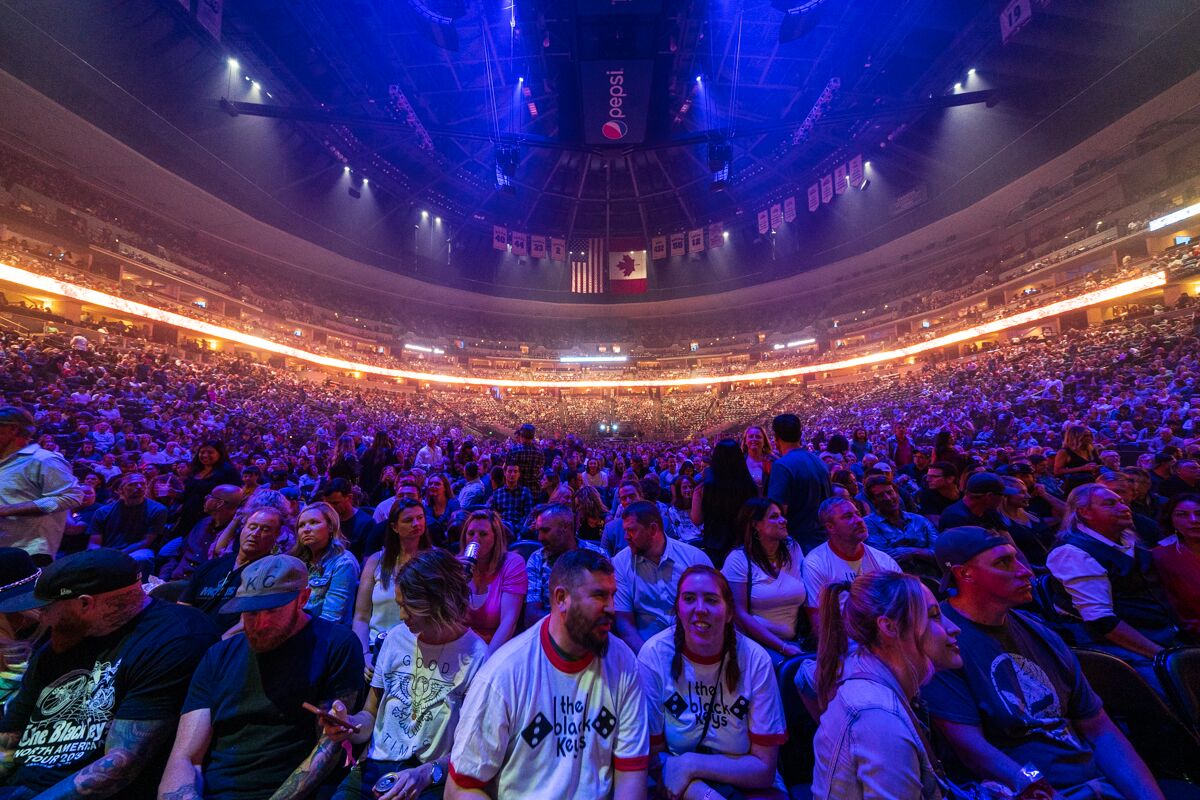 Once the shock subsided it was time to rock, as The Black Keys graciously approached the stage. Waving to the scores of fans gathered in the arena, the band took their time in anticipation of launching the tour proper. Breaking into “I Got Mine” from 2008’s Attack & Release, The Black Keys started the show off with the fans in mind, chugging out riffs from in front of an intimately positioned curtain with their namesake emblazoned on a glowing marquee. Rounding out a slew of deeper cuts, the band dropped the curtain to reveal hundreds of lights and a LED screen framed with lightning bolts to dive into “Gold on the Ceiling.”

It didn’t take long for the obvious cobwebs to be swept off and for The Black Keys to find their groove. Dan Auerbach belted across the fuzzy garage-sounding instrumentals and Patrick Carney tore up something mean as he blitzed his drumset. The obvious nerves gave the performance an edge — a sharp point to prove, and The Black Keys came equipped to prove it. The band traversed a career-spanning setlist, turning out songs as far back as 2003’s “Thickfreakness” to new gems like “Lo/Hi” and “Eagle Birds.” The magnetism and the raw energy permeating from the band’s set was less a return to form as it was a reintroduction of the band to the current day and age featuring The Black Keys at their best and brightest. 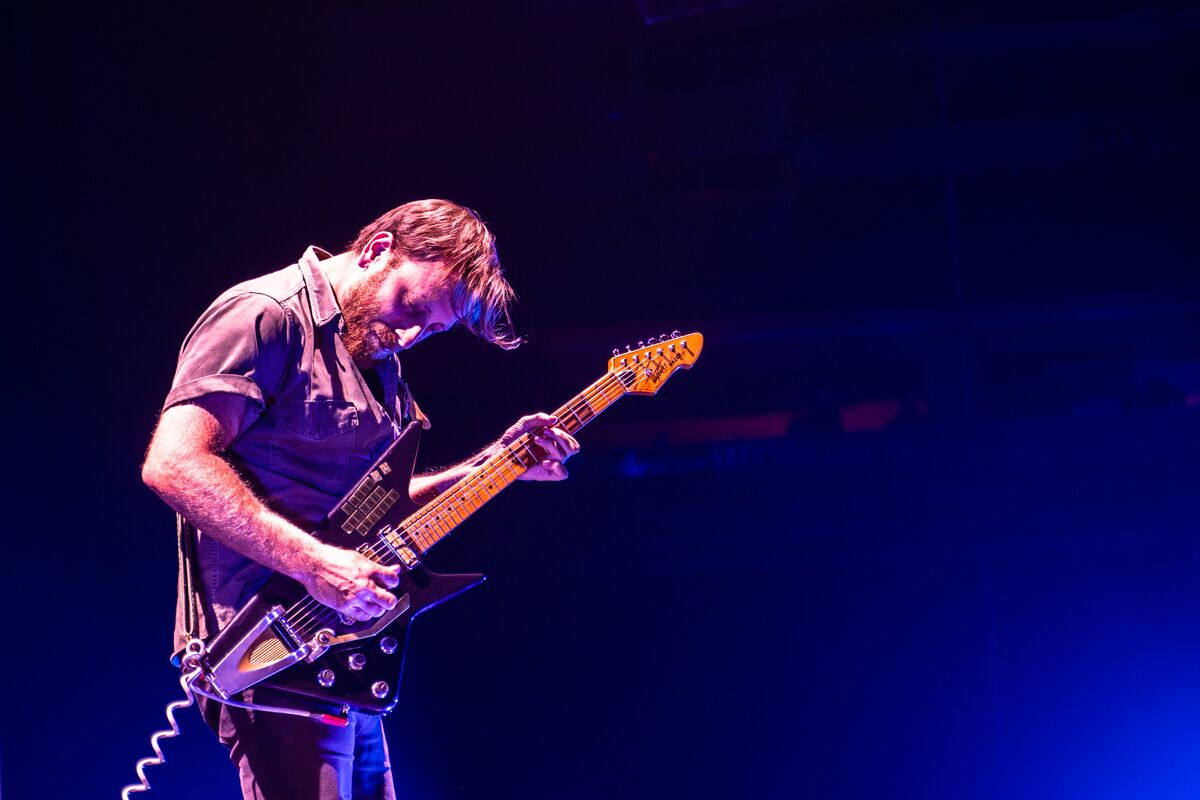 It may not be the early or mid-’00s anymore, and the face of rock has certainly changed, but the genre is far from dead and the Black Keys are far from removed at its core. As poignant as the current landscape may feel, the stark image imprinted on Let’s Rock’s album cover and the eventual larger than life electric chair that arose during the band’s victory lap of an encore, points to the statement appearing to be as follows — rock out or die. For a genre that has seen such an upheaval in recent years, the visual serves as a call to arms, and if last night’s performance was any indication of The Black Keys’ stance — they’re not going down without a fight.