For the uninitiated, the typical associations with metal music include black clothing, devil worship and of course loud angry songs that seem to have no point other than simply being loud. Though those stereotypes aren’t necessarily unfounded, anyone with an interest in metal will tell you, the genre is filled with many nuances. From the sub-genres that push the conventional boundaries of genre to the welcoming community of fans, metal is far more than meets the eye. Metal fans could provide a list a mile long of reasons to love the music – and fans who have been following the quarter of a century career of Acid King will tell you that their debut album is high on the list.

Stoner metal hall-of-famers Acid King erupted onto the scene in 1999 with their debut album Busse Woods. Recognized within the metal community as one of the greatest albums to ever come out of the scene, the record stands the test of time. It’s as good today as it was when it was initially released 20 years ago. 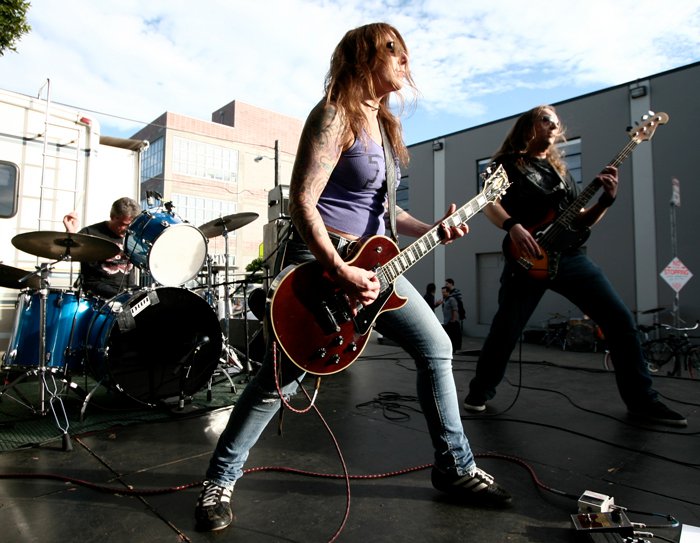 Busse Woods served as vocalist and founder Lori S.’ ode to the drug-fueled days of her youth. The six-song album captures the feeling of tripping in the woods as a teenager and encapsulates everything that metal is all about. Even the title of the album comes from the name of the park near Lori S.’ Illinois hometown where she used to spend her afternoons falling down the rabbit hole with friends.

While many metal bands create music that exists outside of the stereotypes of the genre, the clichés of metal exist because of bands like Acid King. However, if Busse Woods is any indication, then those stereotypes are exactly the kind of thing stoner metal fans should look for when searching for new music. As far as doom and stoner metal music fans are concerned, all music should sound like Busse Woods – balancing deep basslines with quiet intros, the album sounds constantly on the edge of sonic explosion.

True to who they’ve always been, Acid King is focusing on revisiting some of their greatest hits – namely Busse Woods. In honor of the albums 25th anniversary, Acid King’s current tour will give fans a chance to hear the album live in its entirety. As an added bonus, if all goes well and fans are still enjoying themselves after revisiting the album, Acid King is prepared to dominate the stage for an additional set, spanning the rest of the trio’s discography. That tour will make a stop in Denver at the Marquis Theater, giving fans a chance to enjoy the iconic album and celebrate its birthday with superstars of stoner metal.

Acid King will perform at the Marquis Theater on September 23. Tickets are available here.