–
Like the best fairy tales, Zabiti begins with a mysterious introduction by a poet. After asking “why are you here?” to the audience (although you won’t just be an audience member for long) he offers a beautiful riddle to solve, then leads you inside the magical forest of Zabiti.

This is the beginning of the newest immersive theater performance in Denver, organized by the “unconventional circus collective” Rainbow Militia. It’s a fairy tale that’s come to life, with masked aerialists, acrobats, stilt walkers, dancers and musicians who tell the tale of a dark curse upon their forest — and ask you for help dispelling it. 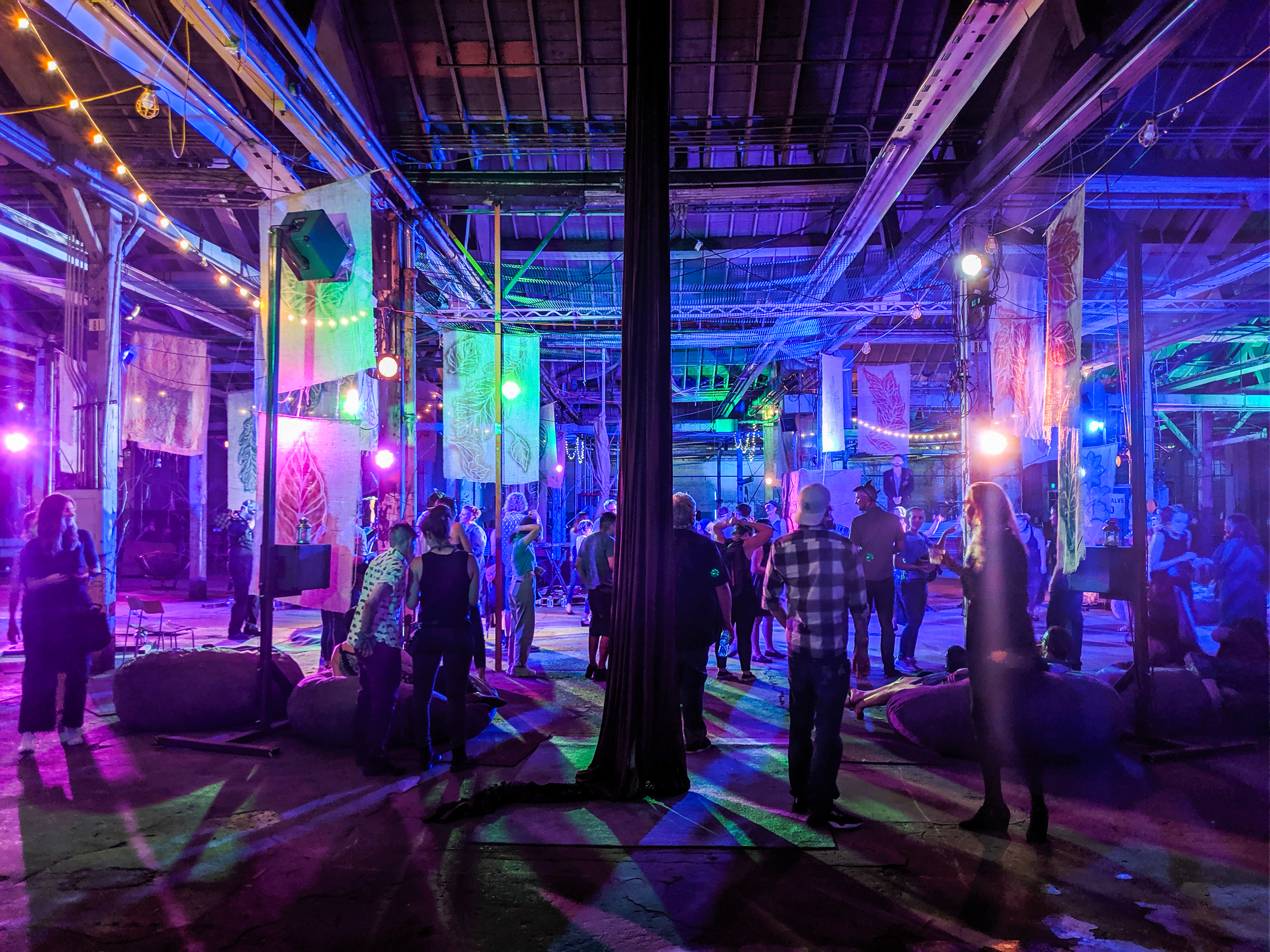 There is no one path through Zabiti. After entering the forest on the invitation by the poet (performed by Stephen Brackett of the Flobots), all audience members (now labeled simply “humans”) are free to roam and discover at their own pace. But, before anyone can start any explorations, the characters all appear for brief introductions — and to clue the humans in about the overall narrative. Of course, it all boils down to the struggle of good versus evil, or in Zabiti, the group of misfits led by a woman and a wolf against the baddies led by an evil Queen and her two acrobatic henchmen. 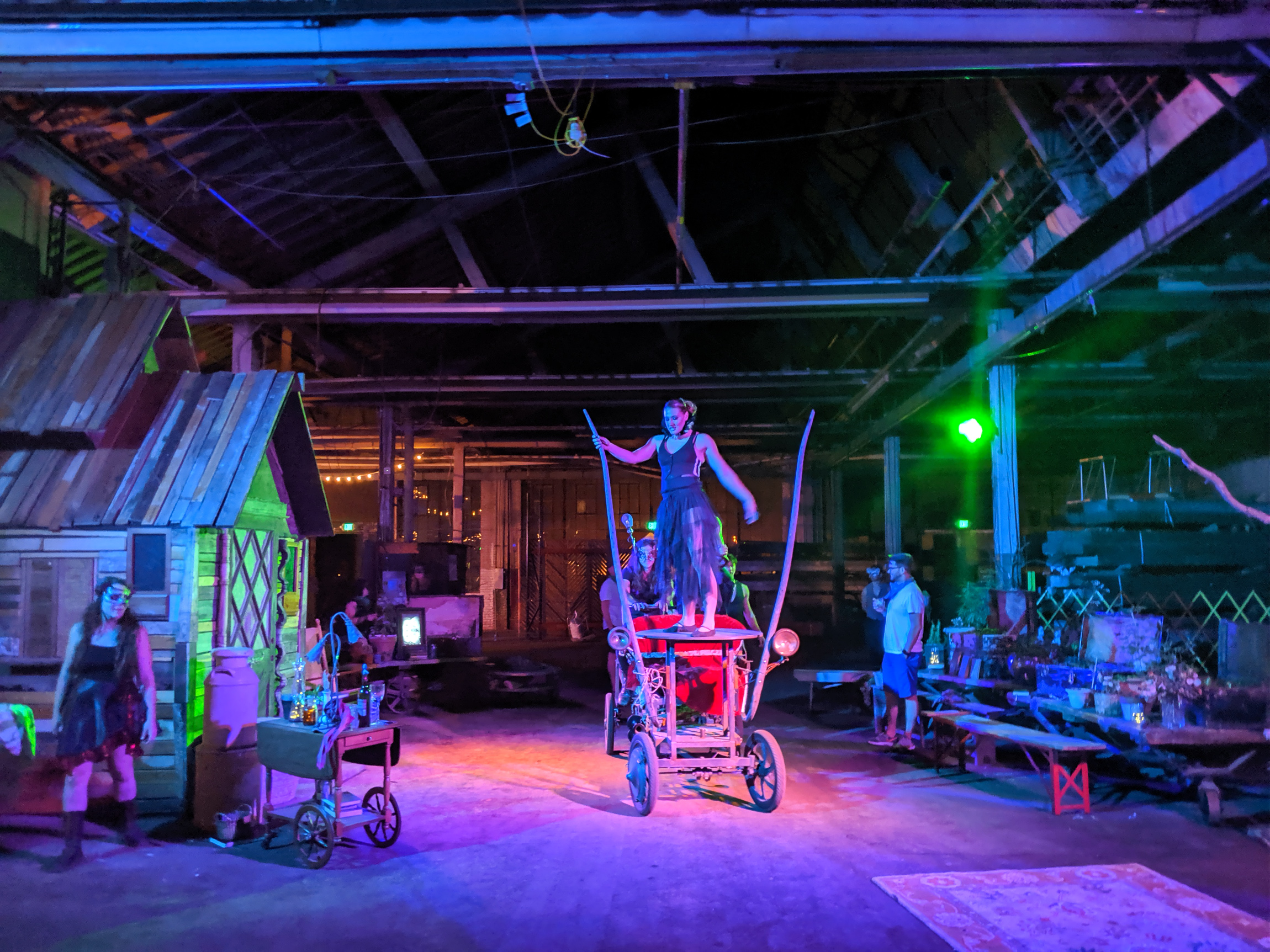 At this point, it is your decision which side to choose, which character to follow, which narrative you want to live. Elaborately decorated stages that surround aerialist apparatuses are peppered throughout the cavernous space, and each one holds a story of its own, begging for closer inspection. “Imagine stepping into your favorite storybook or video game,” the producing director of Zabiti Amber Blais explained.

Aside from wandering around and looking at the enchanting pockets in the forest, humans are also given the opportunity to solve puzzles and help lift the curse in Zabiti. Don’t be surprised if the evil Queen tries to enlist you in her mischievous plans — her henchmen will remind you a few times that they have beer on their side — or if the poet wants you to help him remember something. And keep your thinking cap on for a series of riddles and locks inside a make-shift house, designed by the Denver-based escape room Puzzah! 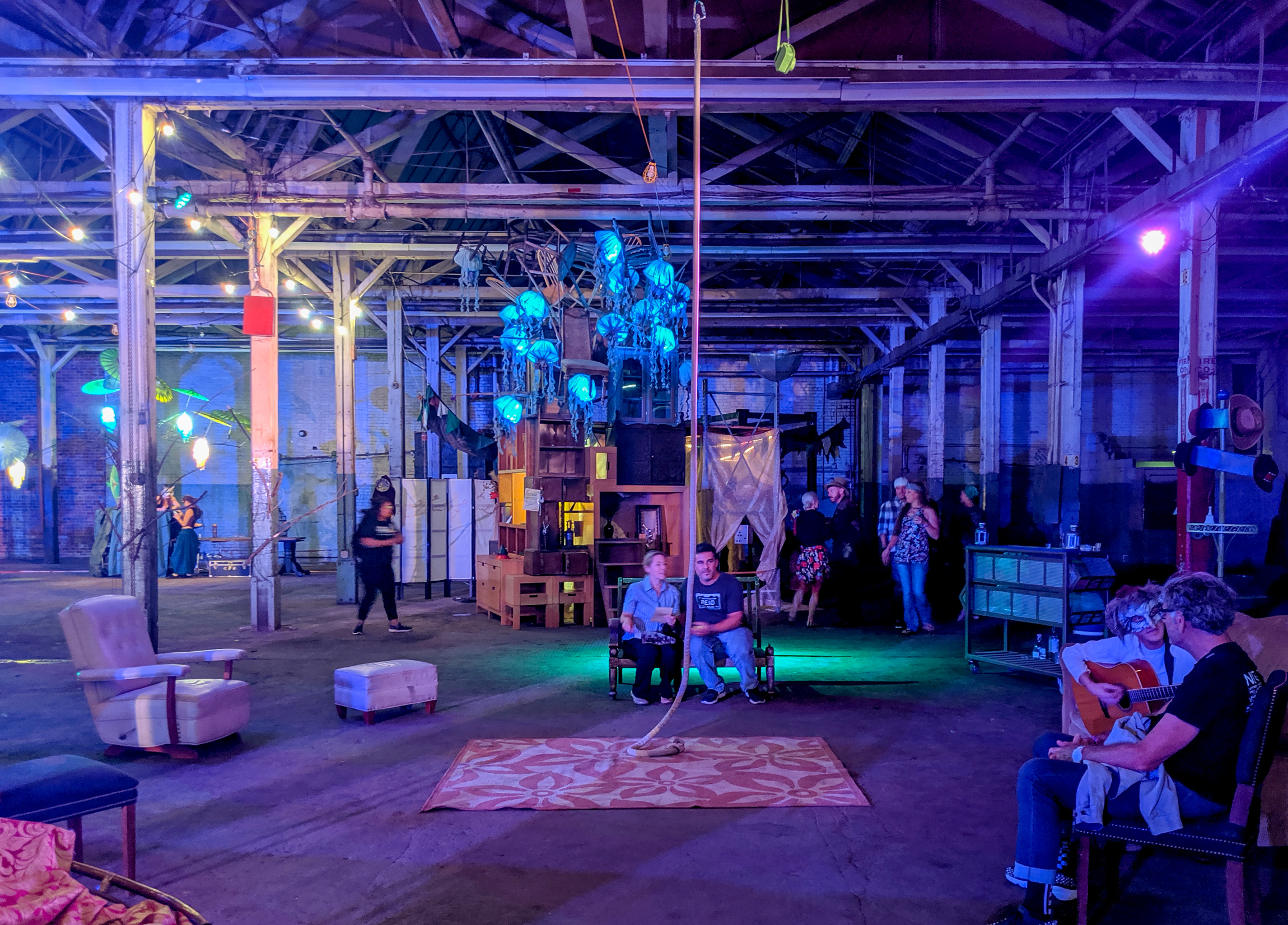 Although there is an overarching narrative that is pretty easy to follow, it’s more fun and entertaining to allow yourself tangents and detours. When the majority of the audience follows the witch and her contortionist Black-Footed ferret, for instance, head toward the “Bad Birdie Bar” and hobnob with the bartender who climbs in and out of an eight-foot-tall birdcage. Rifle through books, and read any notes you find tucked into places — the forest is full of secrets and clues. There are plenty of seats and beanbag chairs for the less adventurous participants as well, in case you’d rather just be an observer.

As much as Zabiti is about exploring and succumbing to curiosity, it’s also about the creative triumph of the more than 30 artists who aided in the creation of it. Much like an actual forest, Zabiti is a collaboration, an ecosystem of artistry ranging from movement to digital projection to live music. It’s also a tribute to the endangered and imperiled species of Colorado, the gray wolf, the black-footed ferret and the Uncompahgre fritillary butterfly — portrayed by performers wearing intricately handmade leather masks crafted by ArtsMyths. 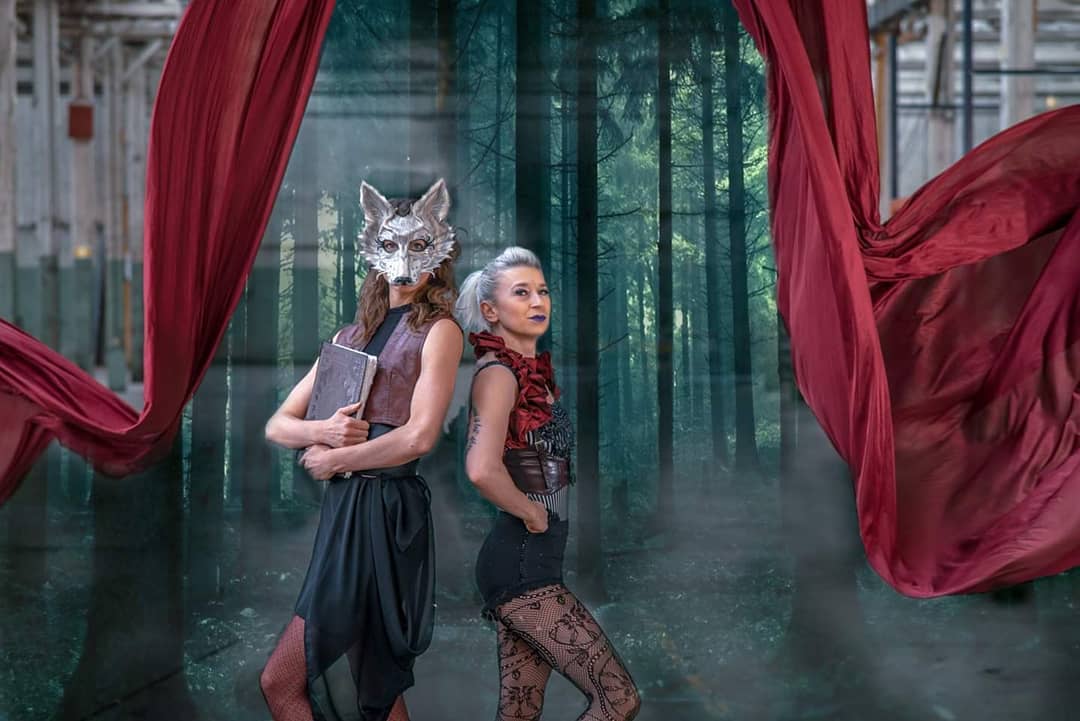 Photo Courtesy of Zabiti: An Immersive Circus Adventure‎ on Facebook

The aerialists and performers acting out the plotline hail from Rainbow Militia, and although they favored the silks for this show, there was an apparatus that stood out as unusual — a dead tree the ferret twists around in a fluid and downright mesmerizing dance. But there were also performances on a rope, in a net and through a keyhole — which are better seen than explained.

The entire soundtrack was envisioned and performed by the local band Chimney Choir, made up of David Rynhart and Kevin Larkin. Throughout the night, the musicians sometimes put themselves on makeshift stages while at other times mingled with the crowd. An accordion playing butterfly acted as the peanut gallery, mumbling sarcastic and humorous quips while other characters spoke passionately about their cause. 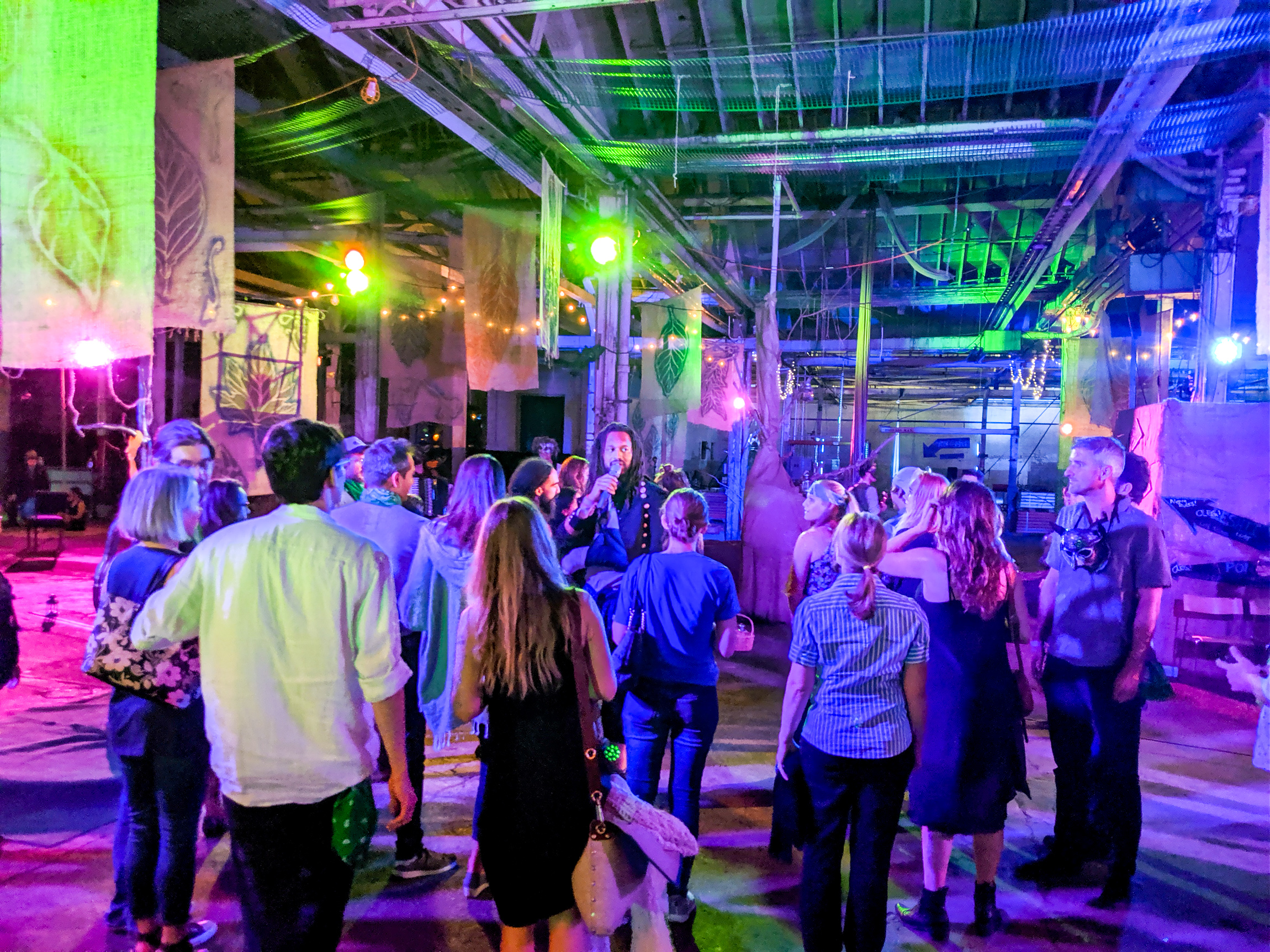 Stephen Brackett as the poet in Zabiti

The script was written and performed by Jess Robblee of Buntport Theatre and Brackett. Each time Brackett’s deep, calm and enveloping voice boomed from the darkness of the forest, everyone perked up their ears to listen. He obviously already knows how to entrance an audience — as displayed when he’s on stage with the Flobots — and he used rhythm strategically to tell pieces of the story without giving too much away.

Tom Varani and Andrea Pliner of Unfinished Library designed the world and stages, giving the Denver Rock Drill a complete transformation into a magical and otherworldly grove where belief can easily be suspended. And finally, Cacheflowe (Justin Gitlin) made interactive digital projections which added to the enchanted atmosphere. 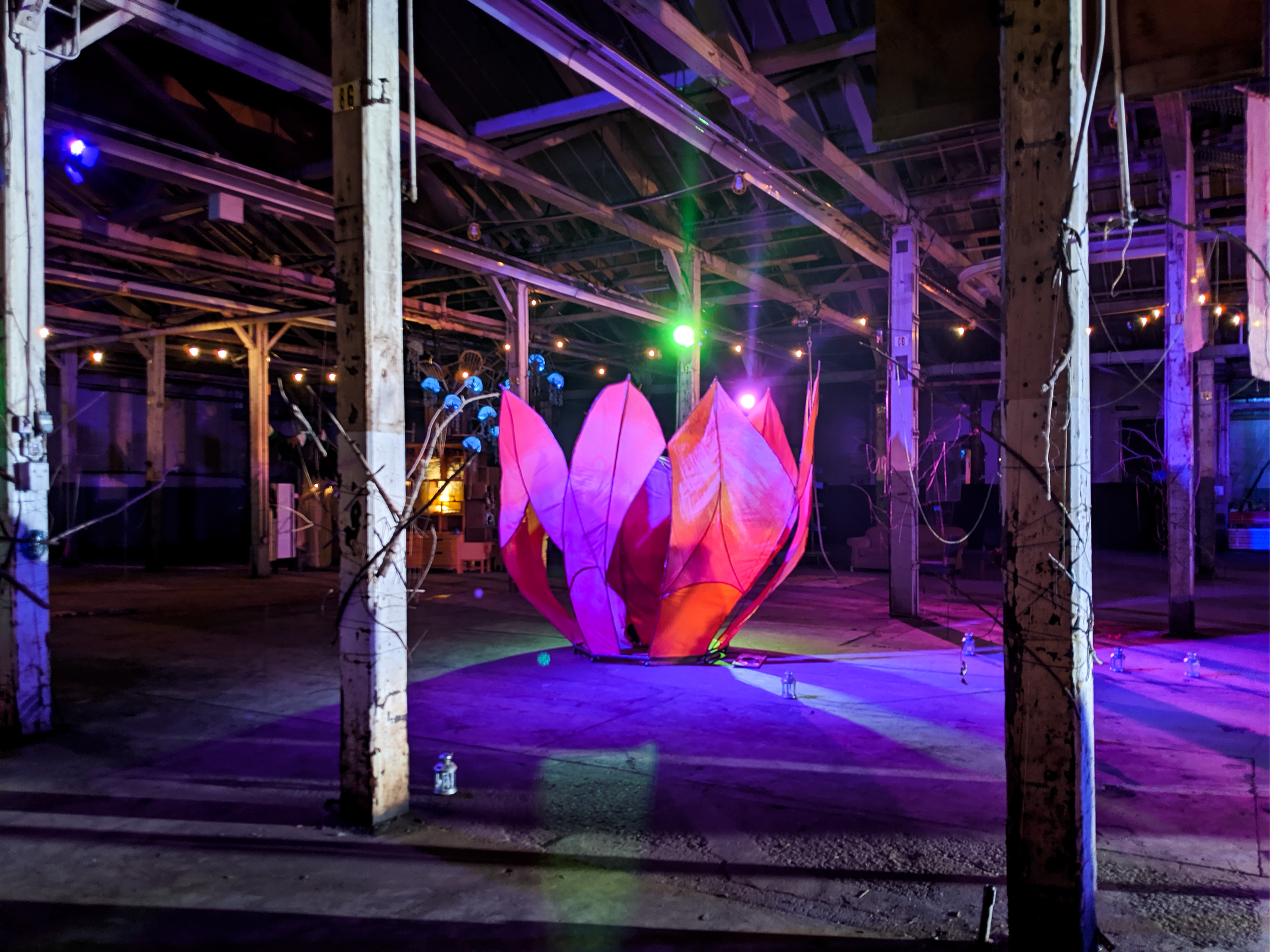 By the end, it’s hard to differentiate the parts of the performance where you observed and where you interacted. At times, the forest of Zabiti makes you feel as if you’re the one being watched. It’s delightful and entertaining — and sure, sometimes it’s a little awkward — but ultimately it impresses a sense of hope and wonder, just like how you want a fairy tale to end.

Zabiti was produced in partnership with Defenders of Wildlife and Rocky Mountain Wild to allow audiences the ability to help their favorite animals after the show.

There are 15 performances of Zabiti that will run from August 22 through September 8.