Review – Daniel Caesar Brought Only Love to the Summit

By the time doors opened at Summit Music Hall for Daniel Caesar’s sold-out stop in Denver on his “Case Study 01 Tour,” the line snaked from the front door, all the way down the block, and into the street. It seemed nearly impossible that all these people would fit into the venue, but the overwhelmingly young crowd did, though not without sacrificing their personal space. No one seemed to mind, however, and the whole crowd grooved into each other throughout the night. 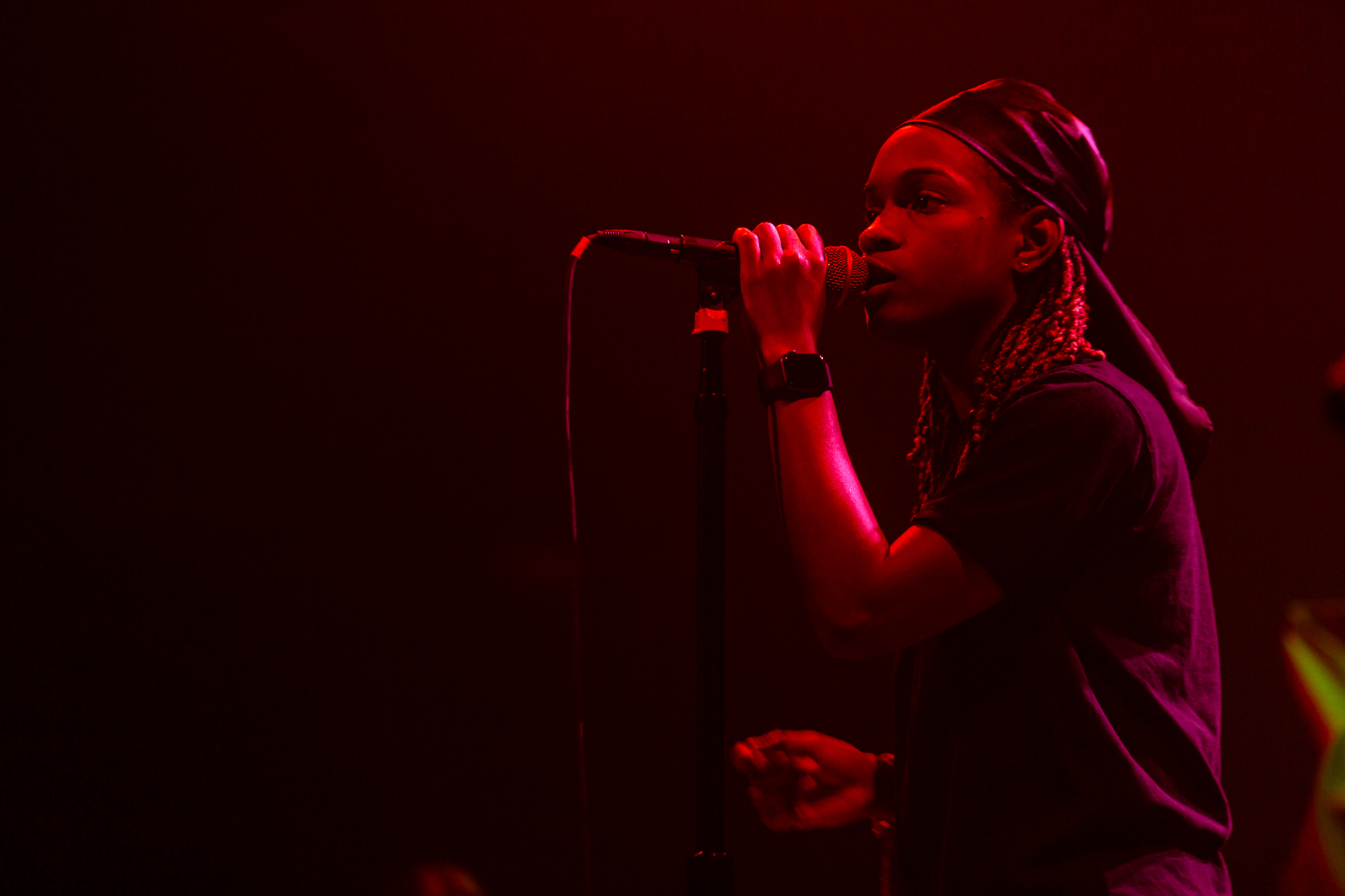 Reggae artist Koffee opened the night, playing her third show with Daniel Caesar. Born Mikayla Simpson and raised in Kingston, the 19-year old first found recognition when she posted a tribute to Usain Bolt on her Instagram and the Olympic champion reposted it to his account. She describes herself as a “singjay” – a singer-songwriter and rapper, more commonly known as a DJ in Jamaica. Her impressively fast vocals juxtaposed with a three-piece acoustic band proved to be a hit for the crowd as they cheered her on whenever she hit a particularly quick rhyme scheme.

She spent some time talking with the audience, explaining her music and expressing her gratitude to Daniel Caesar for having her on his tour. Koffee introduced the politically-charged “Raggamuffin” as a song “about the youth, for the youth, to the youth.” The song was a perfect example of her self-described mission of using her success to “bring positive change to the world” and “make a positive movement.” It’s clear she doesn’t take that platform for granted as she introduced her song “Toast,” describing it as a very special part of the set – a song about gratitude. She took the time to thank an audience member for sending her a bracelet backstage, pointing it out on her wrist and making sure they knew she was wearing it. Koffee’s stage presence felt incredibly genuine and as she danced her way off-stage, she left the crowd with good vibes and ready to keep grooving. 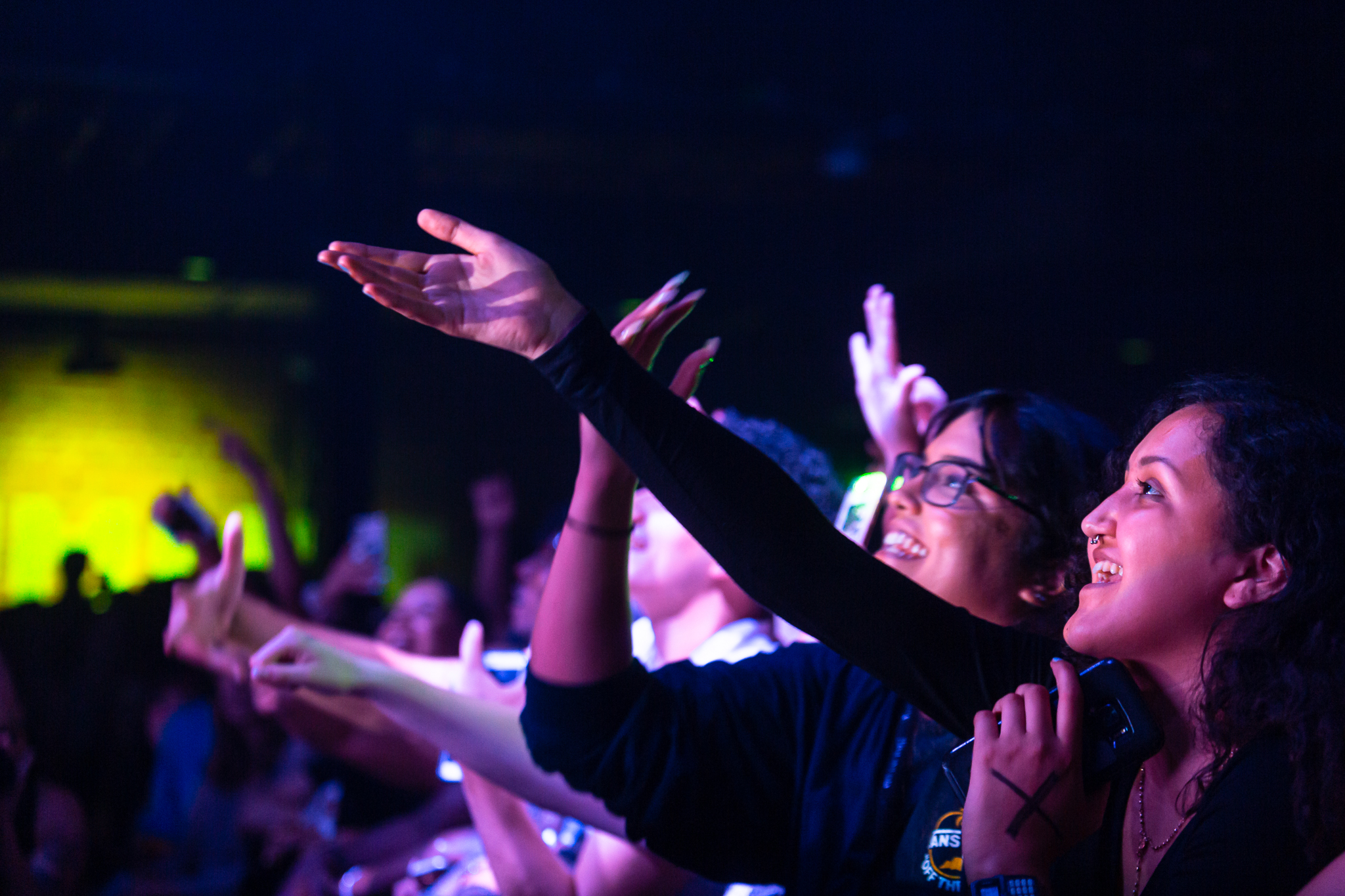 As the stagehands set up for Daniel Caesar to enter, the crowd grew a little impatient, chanting the Canadian R&B crooner’s name a few times before things died back down into buzzing excitement. After finding both popular and critical success for his nearly flawless debut album, Freudian, Caesar went quiet, dropping the occasional single before becoming embroiled in controversy earlier this year. Shortly afterwards, he surprise released the science metaphor-inspired Case Study 01 – chock full with collaborations from artists like Brandy, Pharrell Williams, Jacob Collier and John Mayer – in June. The album topped Freudian on both U.S. and Canadian charts and fans have already sold out many stops on his tour.

Being at a Daniel Caesar concert, it’s easy to see why his shows have a reputation for mid-concert audience marriage proposals. Caesar entered the stage to screams from the crowd, opening with “Cyanide” before sliding smoothly into his ‘90s-inspired collaboration with Brandy, “Love Again.” He paraded around the stage, clearly enjoying himself and feeling the love from the audience. His sultry vocals were only built up with his backing band and background singers adding layers to the sound. The production of his show was clean – the only visuals were simple lighting effects intensified by the smokiness of the room. It was clear he preferred the music to be the single focus of the room’s attention and he was dedicated to making sure people were having a good time with it. 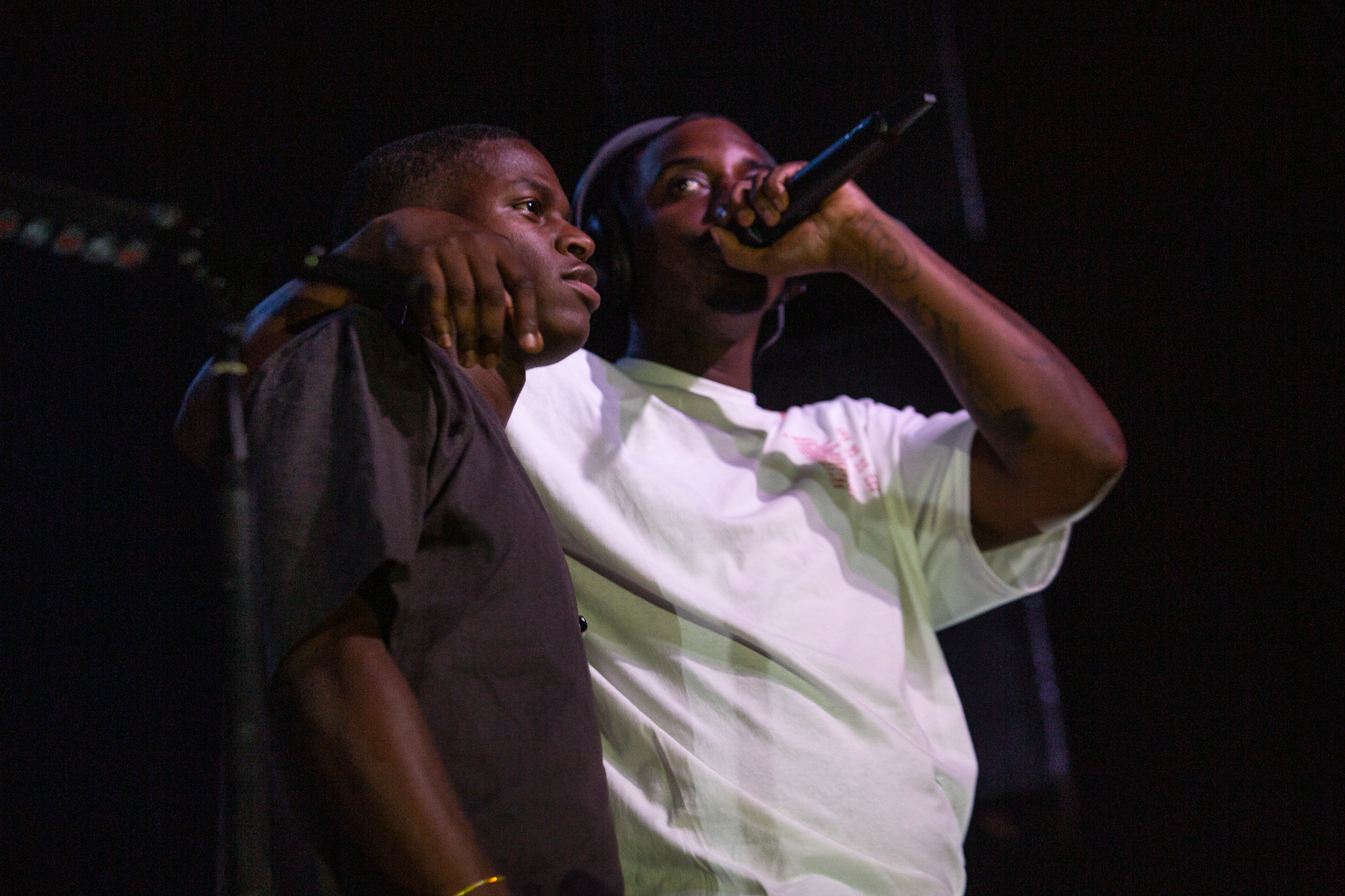 During “Restore the Feeling,” Caesar brought out Sean Leon, a friend, frequent collaborator and founder of the Toronto-based IXXI Initiative of which Caesar was also a part of. The camaraderie between the two lent some fun to the laid-back track. Hearing the production of Jacob Collier’s signature multi-part harmonies underneath their verses only added to the experience of the song and Leon and Caesar shared a special moment on-stage in a hug before Leon left.

Caesar also took time to showcase his guitar skills, using the middle of his set to take things to a more acoustic, intimate level. He treated some of his long-dedicated fans to an older single, “Violet,” before his background singers gathered around him and sang “Too Deep to Come Back” in a call-and-response with Caesar. The room seemed a little bit smaller and the crowd swayed, transfixed by his sweet vocals and gentle finger-picked guitar playing.

After a short mash-up of “Complexities” and “Hold Me Down,” Caesar returned to his full band and revisited his major hits off of Freudian to an immediately positive crowd response. While he didn’t speak much aside from introducing his band, Caesar brought the crowd into his music in other ways. He let the audience take over during “Get You,” holding his microphone out to the crowd and letting them sing, using little prompts to guide the audience along. “Kingdoms have what?” he asked, to which the audience sang back, “Kingdoms have fallen.” As he traditionally does during “Best Part,” he allows the audience to duet with him, asking the room to sing all of H.E.R.’s parts, stepping in only for his own. 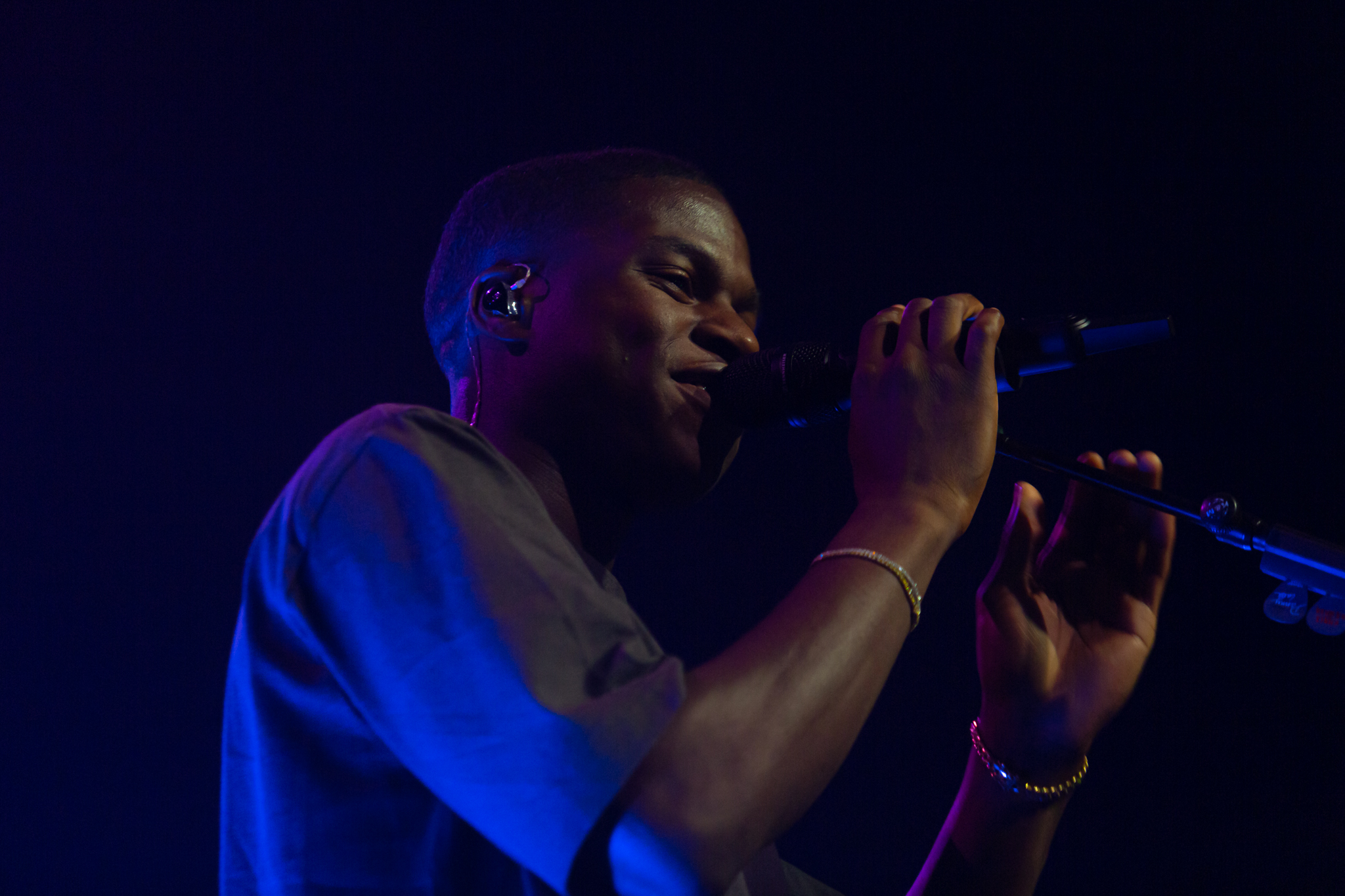 Caesar chose to end the main part of his set with “Superposition,” his collaboration with John Mayer. Mayer’s slow guitar licks underneath Caesar’s falsetto make for a hypnotic experience. The song is a golden moment on Case Study 01 and proved itself to be a similar moment live during Caesar’s show.

The crowd once again chanted his name after he exited the stage, cheering for an encore. The familiar beginning drum beats of “Japanese Denim” started to play and he happily obliged returning to the stage for one final song. “I don’t stand in line, I don’t pay for clubs, fuck that,” he sang, middle fingers in the air. The crowd sang every word right along with him and let the slow groove take them through to the end of the night.