Mission Ballroom, the newest concert venue in Denver, is set to open in August. In recent weeks, the hype has been growing as construction nears an end. With the excitement about the music to be experienced, there’s something else to look forward to — the commissioned, original artwork found throughout the venue. Made by an admirable group of locally-based artists working in different mediums, the art inside Mission Ballroom fits a general theme — ’60s and ’70s psychedelia.

READ: We Toured Mission Ballroom With Chuck Morris and Got The Inside Scoop

303 Magazine was able to grab a sneak peek inside before the art is finished and the venue opens to the public — and what we found floored us. 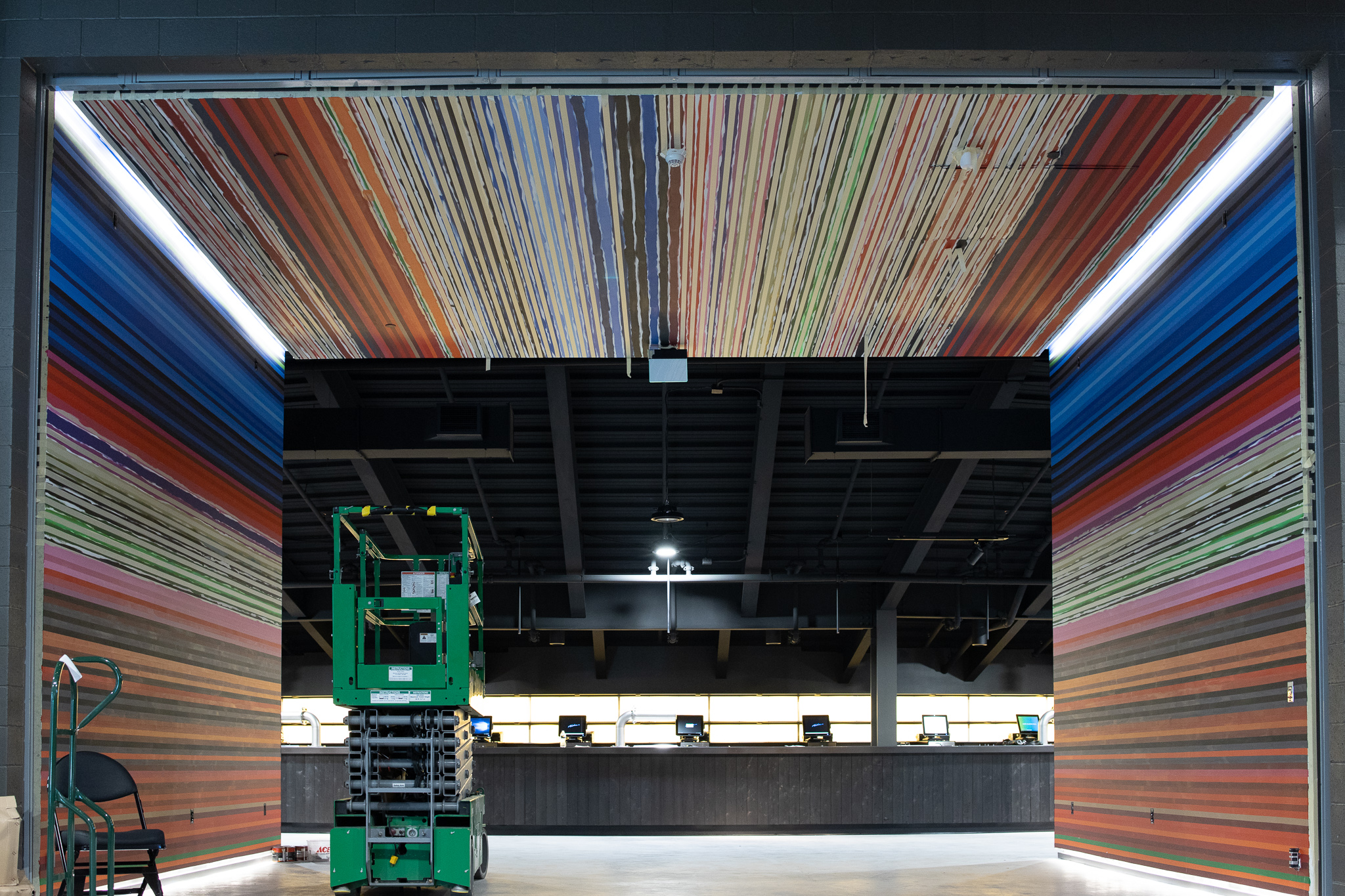 Anthony Garcia Sr.’s work in progress in the entrance to the venue.

When Mission Ballroom commissioned artists to add to the space, it didn’t limit them to a single area. Instead, visitors and music lovers will find art around every corner, from the loading bay to the box office. Kellie Donahoe with AEG curated everything, hand-picking the artists and assigning them locations within the venue. Donahoe has previous experience in curation, although it’s typically been focused on individual DJs and bands’ visuals and tour branding, rather than such a comprehensive undertaking to represent many different styles of music under one roof. Hats off to her on this project — her efforts (along with the artists’) truly amplifies the space from a place to enjoy music to a place where music and creativity combine in an unforgettable revelry.

“Our goal for the Mission aesthetic was to highlight what Denver has to offer in terms of art and entertainment, both sonically and visually. We want the art to guide patrons through the space in an exciting way that hasn’t been experienced in other venues,” Donahoe explained. “The art was curated in a way that we hope will compliment all genres of music, in hopes that the art enhances the live music experience rather than distracts from it,” she added. 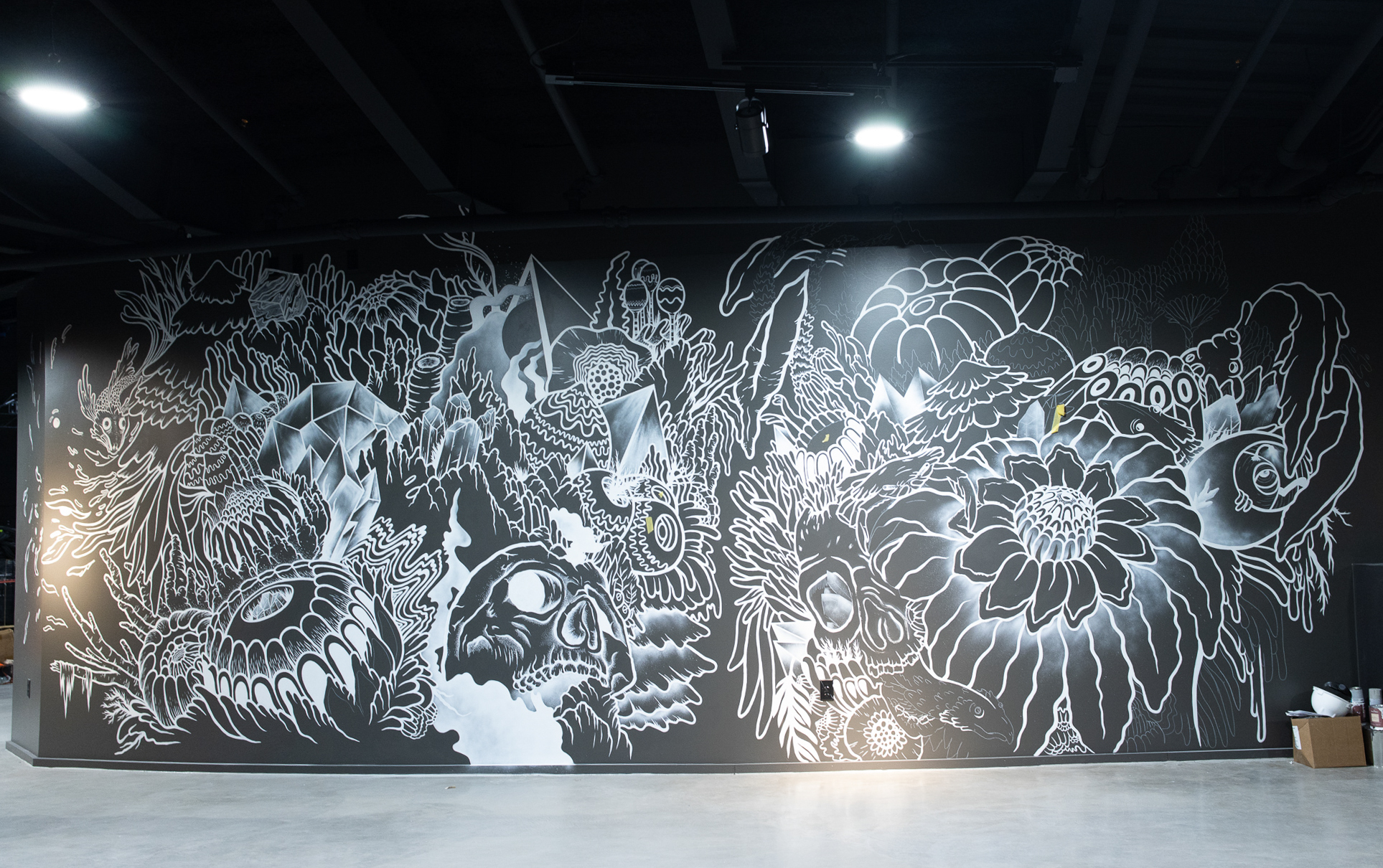 The selection of artists is wonderfully diverse — there are wheatpasters, sculptors, digital artists, muralists, a neon worker and more. Although the psychedelic theme might warrant an explosion of color from less subtle curators, Donahoe’s selection incorporated many different motifs in order to build the vibe gradually. For instance, a black-and-white mural by RUMTUM leads concert-goers into the ballroom, but it’s illuminated by the burning lights from Scott Young’s neon pieces hanging on the opposite wall. These small decisions about placement and interaction between the artists’ works add up significantly, leading to an overall feeling that you’re paying homage to what was once a counter-culture movement.

From a visitor’s standpoint, the first art they might encounter is created by Denver-based artist Lindee Zimmer and found in the box office and coat check areas (as well as on the second level). Zimmer has made a name for herself quickly in Denver, after moving from Fort Collins, as a muralist and studio artist with a naturally-inspired whimsy. Her pieces at Mission Ballroom are painted on carved panels that form the shapes of heads and hands, with loose color bands. 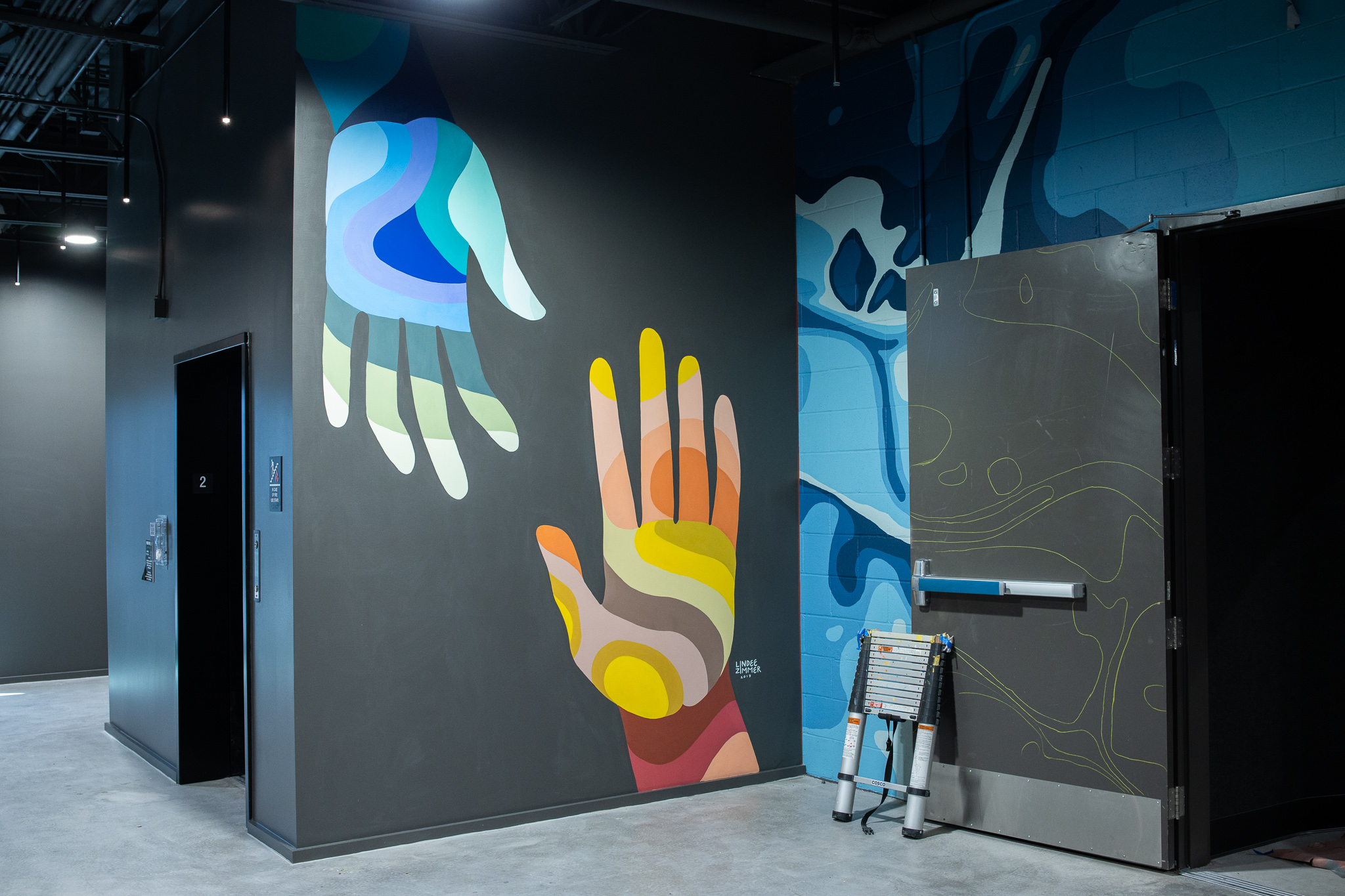 Hands by Lindee Zimmer and mural behind door by Christopher Warren

Next, the eye is split between three different areas and multiple different artists — Anthony Garcia Sr. with painted stripes forming a vortex that leads into the first bar and the rest of the ground floor of the venue; Sofie Birkin with a painted pink hand on the stairs leading to the second bar and level and a rotating projection of digital art on the wall to the left. Some of the digital art will come from students at Rocky Mountain College of Art + Design (RMCAD).

Garcia Sr. is one of the founders of the Birdseed Collective — a local nonprofit that uses art to enhance communities — and his style has become an iconic part of the Denver public art scene. His pattern work can be found in nearly every neighborhood, including at the interchange of 6th Avenue and Federal Boulevard, in the Lakewood Dry Gulch Park, RiNo, Globeville and more. 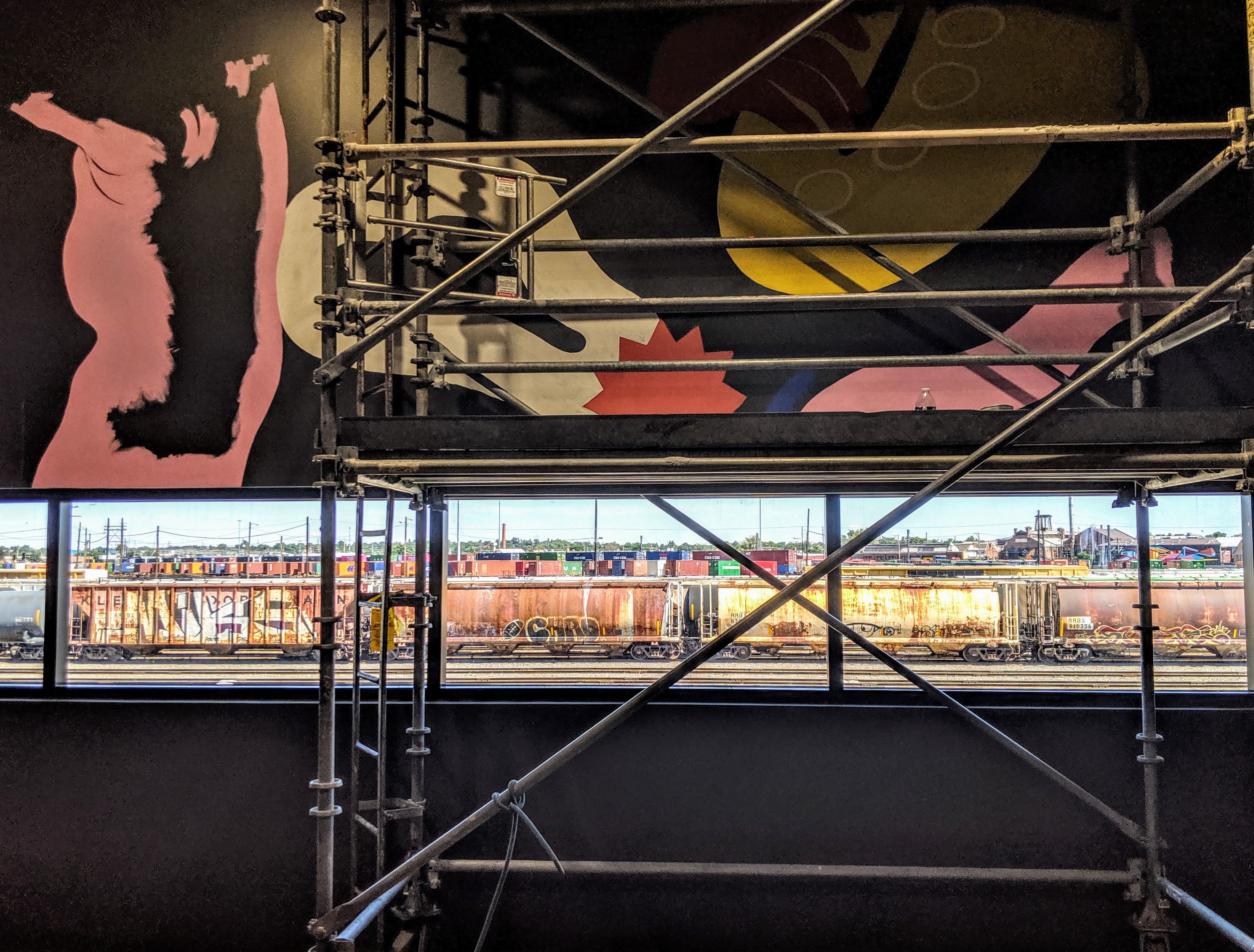 Birkin is a British-born illustrator who moved to Denver in 2015 and has notably drawn inclusive sex scenes for Cosmopolitan magazine. Her work in Mission Ballroom spans the entire staircase, from the pink hand mentioned above to a large mural atop a window that overlooks the train tracks. Using pastel colors next to bold primary tones makes her work feel right out of the ’60s. 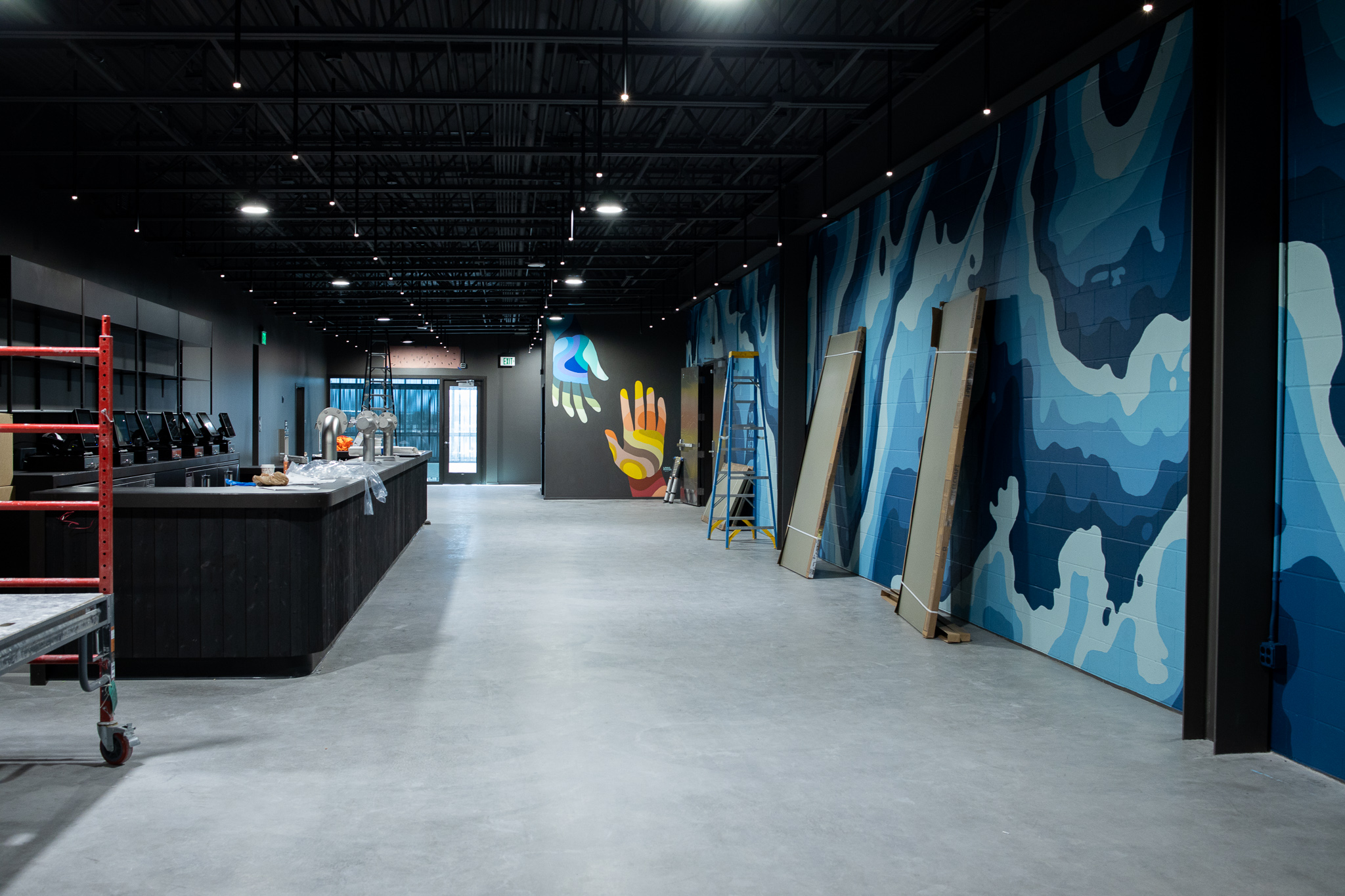 Christopher Warren’s mural on the right and Lindee Zimmer’s hands at the back.

Upstairs you’ll find a geometrically-inspired piece by Pard Morrison and a large mural by Boulder-based artist Christopher Warren (aka beatnikprints). Using maps of the places he paints as a reference, Warren leaves a reminder to all those who pass by his murals where they are in relation to their surroundings. His choice to paint the characteristic lines of topographic maps in ombre shading is fluid and (we’ll say it) a little trippy.

Before you ever set foot inside the auditorium where music is played, you’ll encounter more art than some galleries are able to show. But that’s not the end of it, because Mission Ballroom’s art is also for the musicians, with murals and prints inside the dressing rooms, back hallways and VIP lounges. That’s where to find the work of Meredith Feniak and Risa Friedman, Jae and Kevin Sin, Marsha Robinson, Nick Guerts and Ryan Elmendorf and the unmistakable art of Thomas “Detour” Evans. Detour had the distinct pleasure of painting the double doors that every musician will enter the stage through. 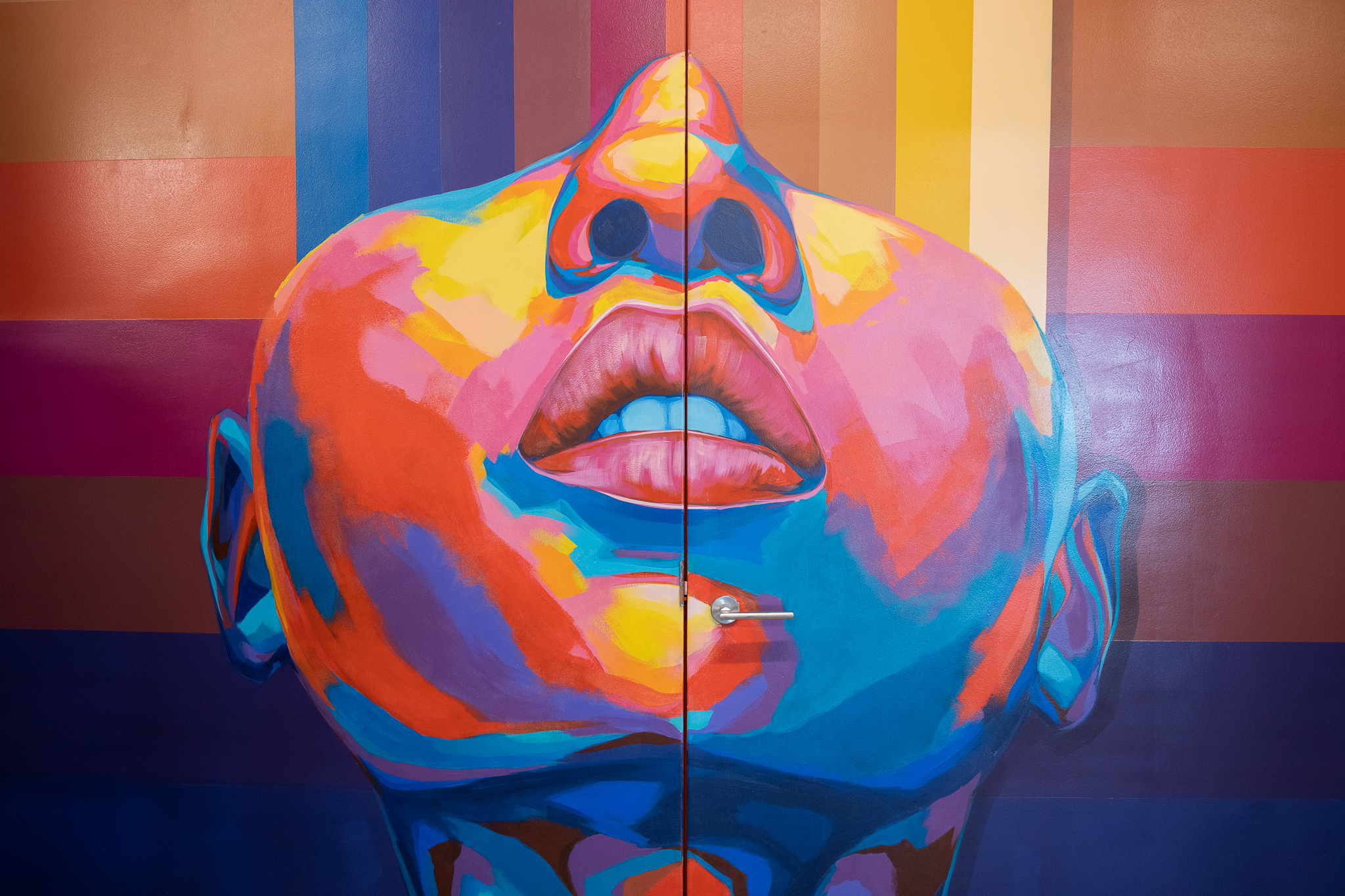 Although we visited too early to see the finished product by Mike Lustig, he’s contributing a giant mirrored ball that is so much more than any regular disco ball for the main auditorium. It will shine from within with LEDs that are brighter than car headlights, casting geometric shadows across the enormous room. From the description given by Donahoe, it will be the cherry on top of the whole artistic experience inside Mission Ballroom, giving concert-goers the perfect pinnacle to direct their revelry.

With the opening day quickly approaching, the artists are finishing their pieces and the entire vibe is coming together. Don’t expect to see shag carpet and cheap ’60s fabrics or patterns though, this curated venue is the tasteful appreciation of a movement in art and music that defined a generation and gave inspiration to many others after it. 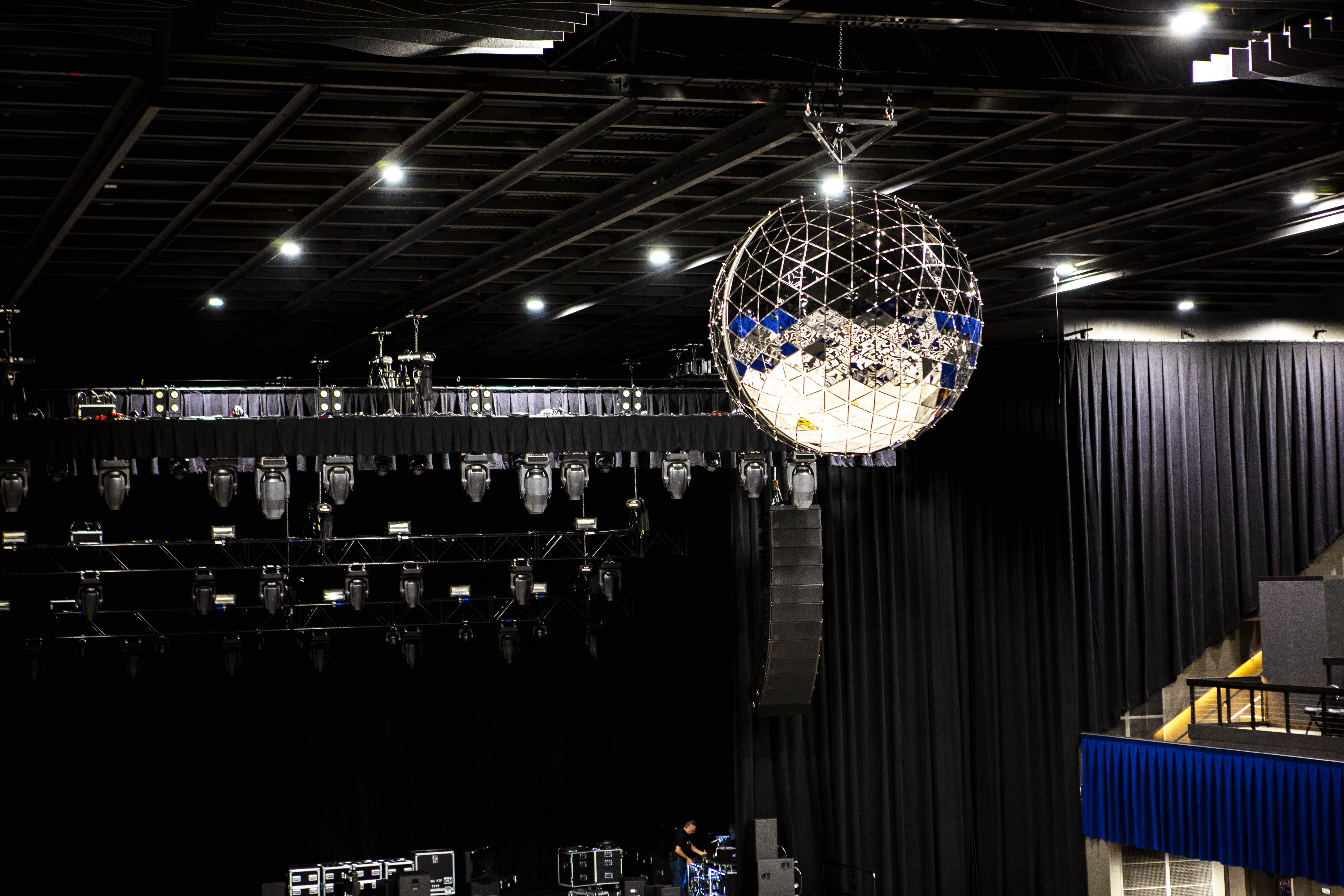