We have all heard a speech from well-intentioned (and sometimes not so well-intentioned) individuals weighing in on a process that creates grief, guilt, prosperity and innovation all within the same breath. No one wants to admit that they benefit from it, but they do — gentrification is a rigged coin toss meant to bring more prosperous people the thrill of a culturally diverse landscape with the same safeties and niceties reserved for parts of town that already hit six-figure incomes. No one can tackle the problem without implicit bias from either side of the argument. In this world of capitalistic gains and “beautification” for the sake of a leaning definition of egalitarianism, someone always comes up losing.

Such is the story of Denver’s Northside, a neighborhood transplants and natives alike now refer to under the umbrella term “LoHi” or “Highlands.” Behind the concept eateries and newly sprouted smart houses is a world that already existed, with a heartbeat stronger and richer than what people illustrate. Bobby LeFebre aimed to tackle this history in his theatrical performance Northside, and through a blend of satire and first-hand storytelling, Northside’s story comes out winning, stirring even the most glazed over out-of-towner to take a second look at their involvement in the gentrification phenomenon.

Northside debuted at Su Teatro on Thursday, June 13. The theater choice was no coincidence. Su Teatro is located on Santa Fe Drive, where a thriving community of Chicanos and Latinos has lived for generations. The cultural arts center aims to promote productions through that lens, trying to produce content that stays true to the rich history of these cultural traditions. The issues addressed in the play hit close to the hearts of the organizers of the center, prompting the Artistic Director Tony Garcia to give an impassioned speech before the beginning of the show. Besides touching upon the importance of history and land as it gets torn down and altered for the sake of someone having access to a nearby yoga studio, Garcia didn’t fail to mention that this land has always been and always will be the land of the tribes that resided on it years and years prior to our current predicament. With that sweeping gesture, the play began in a new light, begging us to question the entire concept of true property ownership as opposed to harmonious living between people and distinct cultures in a world that chooses to blanket over differences for the sake of homogeny. 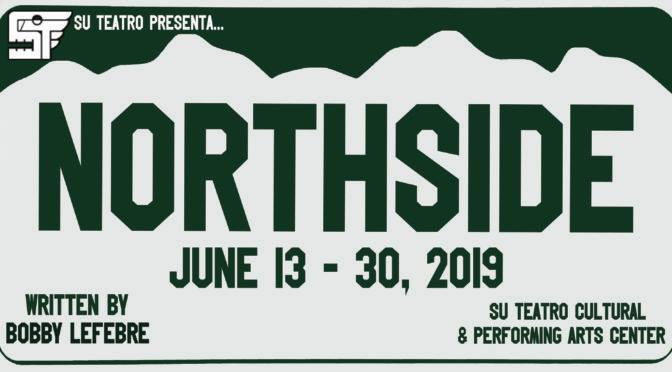 The play follows the story of five couples all in different walks of life and how they intertwine. A young Chicano couple named Luna and Teo — played by Molly Gallegos and Ben Martinez — are looking for a house in their old neighborhood of Sunnyside.  Their realtor, Felipe, poses as another thread in the story. Although Felipe is also Chicano, his focus is on developers and the money to be made in all of these up-and-coming neighborhoods. The internal betrayal of this is very nuanced but still evident. It seems as though his approach tries to speak on the entire entity of property development as a whole, and in this instance, LeFebre’s writing and Hugo Carbajal’s directing hit the mark perfectly without relying on pandering or too much leading of the audience.

There is an opposing bid on the house Luna and Teo want to buy, introducing the tension of the play through the white characters Megan and Sean played by Cary Seston and Seth Palmer Harris. Sean has his reservations about the neighborhood, but they’re rooted in concern about the overall safety and “decrepit” state of some houses on the outskirts of their area. Both Seston and Harris play the part of tone-deaf white Millenial hipsters very well, clad in skinny jeans and referencing kombucha bars and cornhole to the satisfaction of the laughing audience members. They mention the “character” of the house and neighborhood with awe and gleefully note that there’s a light rail station being built near their prospective property that Sean can bike to. This teetering on satire and over-exaggeration is the perfect funneling for the real rage that is an evident undertone of the whole play. Through these comedic pauses, the audience can breathe and LeFebre allows them this oxygen. Without these stereotypes — that are evidently a flipped-script for most cases of stereotyping in this country — the play would feel harsh and unapproachable to anyone outside of the Latin community for good reason. Looking in the mirror and facing your imperfections is hard. Laughing about them is an easier pill to swallow.

What isn’t as easy are the scenes of confrontation between the two couples as they battle for the house they each want to buy. Luna and Teo bicker with Megan and Sean in the realtor’s office once they realize they’re bidding on the same house in what could arguably be the most powerful scene of the play. Outside of already fighting for their right to remain in these neighborhoods, the Chicano couple must also fight for the respect of the white people who are causing the mass exodus in the first place. The scene is moving and infuriating, with Sean at one point telling Teo to go back to work landscaping his lawn. Megan at one point says that she is feeling attacked and that this must be what reverse racism feels like. Where their characters thrive in a space of dramatization upon their introduction, Megan and Sean take on the very real catchphrases of people outside of the marginalized community today upon this confrontation, and that change is so close to reality that it stirs real feelings of injustice that are uncomfortable to sit in. 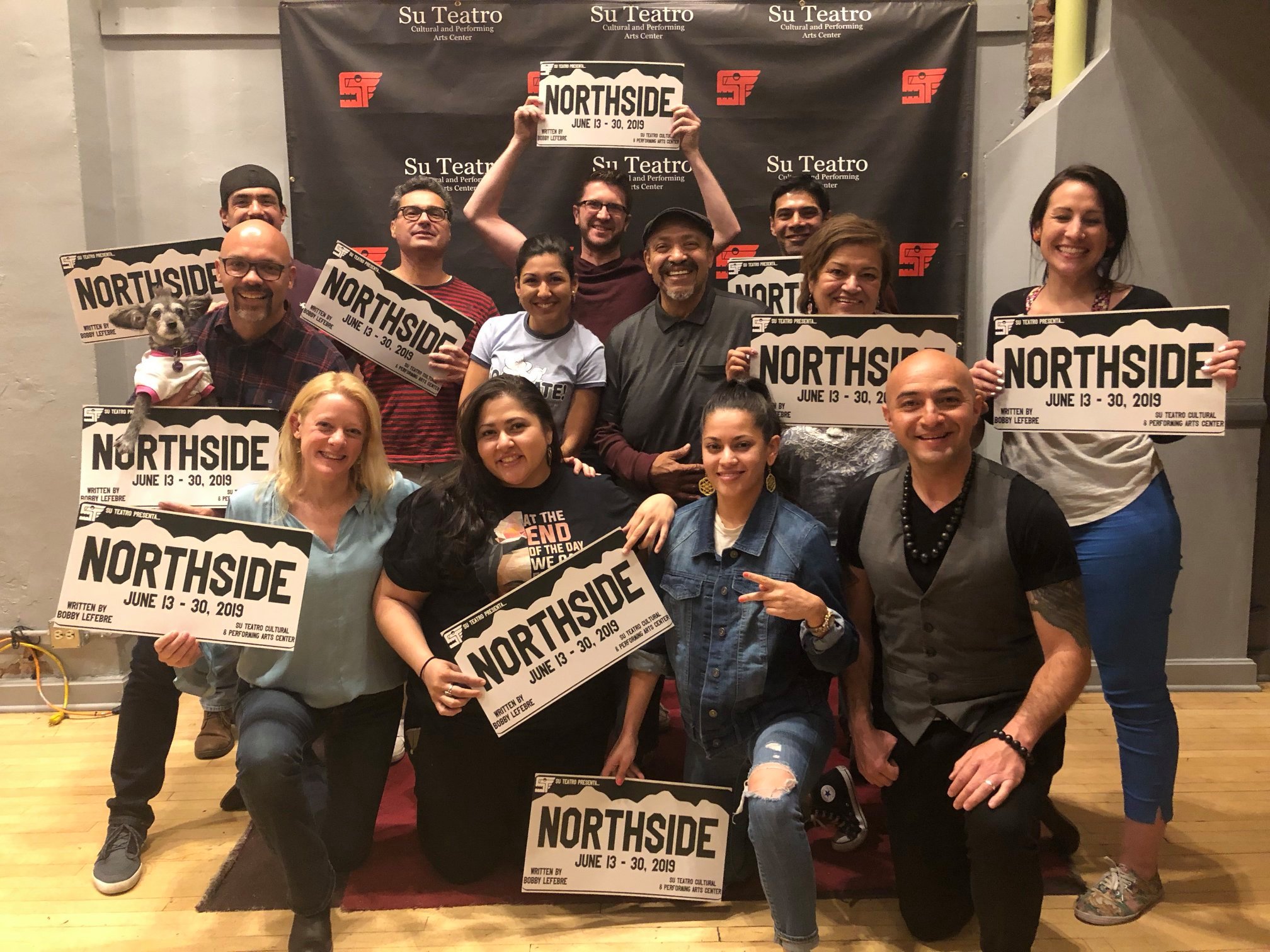 In between these moments are different storylines interspersed to give the neighborhood more meat. There’s a queer Chicano couple that leap through hoops for LGBTQ people by providing much-needed representation in the Latino community, there’s the dynamic between the two realtors, Felipe and Delores, as they navigate a romantic relationship outside of their jobs and there’s the Lujans — the old Chicano couple that ties the whole message of the play together through quips about change and reflection.

The most important takeaway watching this was during a group monologue where the cast members speak on the new improvements of their neighborhood, and how they had wanted these changes all along and had asked for them but weren’t heard due to their skin color. If you find this inflammatory, it’s because it is. That doesn’t mean it’s not true. Public funds to communities are complex, relying on property taxes amongst other factors for improvement. These taxes even define our public school systems. In an economy that is stacked against minorities, how does incremental generational wealth make up for it? It doesn’t. Not immediately. The lives that previous generations dreamed of for their kids is dependent on more than opportunity.  To imagine a community begging for change and not receiving it because of their economic status is more devastating than imagining these same communities as complacent and stagnant. Gentrification is veiled in improvement and altruism when really it’s just about access. Everyone wants the same things. The bottom line is that only one community can get these things, and in the process, the main proponents are marched out of their homes.

The production received a standing ovation in a sold-out theater. When LeFebre took the stage he said to the beaming crowd that Northside was sold-out for the rest of opening week. This comes as no surprise to me. Although imperfect in some areas, the storyline is provocative and also informational, pulling in people that want to learn and also pulling in people that have wanted to be heard for years and finally get to watch their struggle take home in the theater. The audience I sat with on opening night was full of Northsiders that came to support and soak in their realities for the sake of catharsis. It was a beautiful thing to behold. I have lived in Colorado for five years. I grew up in Brazil and then Miami, Florida, which is a slice of Latin America in and of itself. Before moving here I was never the minority. As soon as I started being a part of Denver, I realized I was an outlier. I didn’t feel that way Thursday night. The room was warm with Spanish and for the first time since setting foot in this state, I realized there were places I could go that felt like home.

The environment was still inviting for those who could not be further from this culture. It’s abrasive and difficult to follow every laugh and inside joke that the opening nights audience ate up like Chubby’s tacos, but this is their lives through art, they already know what it feels like to be pushed out. Northside is entertaining but also challenging, delivering a harsh reality that can be difficult to hear and see for some who live in a world outside of the protagonists on the stage. But maybe that’s what we need, to see the other side of the stacked coin toss, even if it’s a bit uncomfortable. How else do we empathize but to immerse? LeFebre leads you through it. You just have to let the play do the talking for you.