On June 17, after a year of planning, community input and multiple agencies working together, the Denver City Council approved the Stadium District Master Plan to transform the southern parking lots of the Broncos stadium into a mixed-use destination. Modeled in part after the Coors Field district project — as well as other stadium districts around the country — the Metro Football Stadium District (MFSD) hopes to provide a new place which flourishes with local businesses, walking and biking trails, affordable housing and entertainment options (whether the Broncos are playing or not).

READ: How Sun Valley Will Change in the Next 5 Years

The entire process sprouted out of community input during the 2013 Decatur-Federal Station Area Plan, and the idea to redevelop the mostly vacant surface parking lots became a “transformational project” — or one that would define the plan and benefit the surrounding neighborhood, Sun Valley. Instead of letting tax-payer dollars fund the stadium (yes, tax dollars are used for initial building costs and maintenance), the new developments aim to raise money toward its upkeep and longevity.

“We are excited to play a role in developing Denver’s next great neighborhood while helping to secure the capital funding that would assist in extending the life of the stadium,” said Mac Freeman, the chief commercial officer for the Denver Broncos. 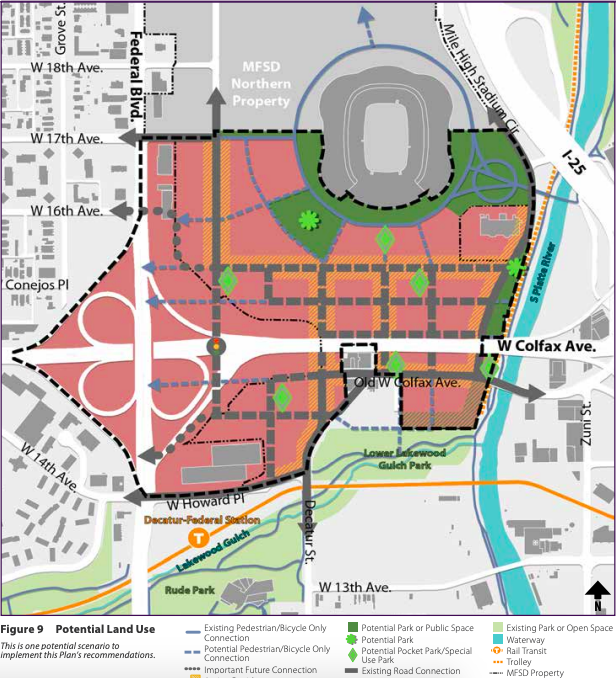 A plan for the “use and experiences” portion of the redesign. Courtesy of the Stadium District Master Plan

So what exactly will this multi-use destination be like? We know it will be a place for locally-owned businesses to thrive (with an emphasis on business-owners in the immediate vicinity) and entertainment options that extend year-round, beyond Broncos game days. We know that affordable housing has been promised, which includes zoning tools and incentives for developers. And we know that pedestrian access and connectivity to parks is prioritized. But the nuance of how these things will fit together is still pretty vague.

One of the interesting recommendations outlined in the Master Plan is the idea of “building massing” and “setbacks” which would incentivize developers to design streets that don’t loom over pedestrians and cars like canyon walls. This allows for more patio space for each level of a building and could help curb the heat island effect common in cities with tall buildings like downtown Denver. 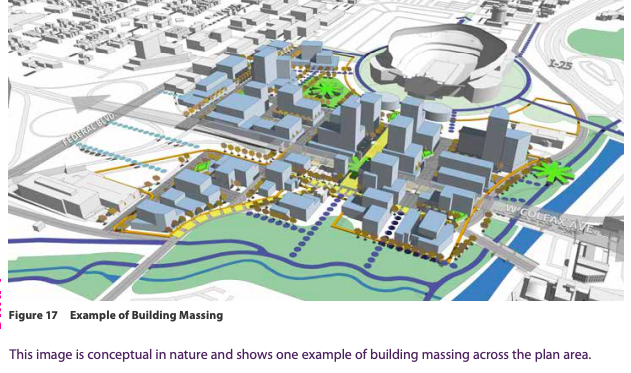 An example of “building massing” found in the Stadium District Master Plan.

But the development isn’t forgetting about the Broncos. Instead, much of the plan accounts for game days and how those will impact the area. Some of the ideas show a “festival street” where tents and vendors could set up during the season. Plus, the north side of the stadium is left untouched, and the surface parking lots will remain there.

Evelyn Baker, interim executive director of Denver Community Planning and Development said in the press release, “this community-driven plan lays the groundwork for the kind of year-round neighborhood destinations residents want that will also improve the gameday experience for fans.”

Denver City Council’s approval of this plan is only the beginning of a long road ahead. No estimates have been given on the timeline of the project moving forward. For more information, go here.