Last summer Danish artist Thomas Dambo erected a massive troll made out of recycled wood on a hiking trail in Breckenridge. Only a few months later, it was taken down unceremoniously in the middle of the night with a chainsaw. Now, the drama has taken another turn as the troll was resurrected this past week — in a new “secret” location within Breckenridge.

With this quick succession of events, the curiosity about Dambo and his creations in Colorado is at critical mass. Which is great — not only for the artist’s career — because the rules of Dambo’s trade are ones we should all live by. Those rules pivot around his appreciation of trash and recycled materials. “[My work] focuses on the issues we are facing in our world with overconsumption. I don’t think my art will save the world but I hope it will open people’s eyes to see that trash does not need to be what the world is drowning in,” Dambo remarked during an artist talk at the Denver Botanic Gardens on May 5, less than a week before the new Breckenridge troll opens to the public. 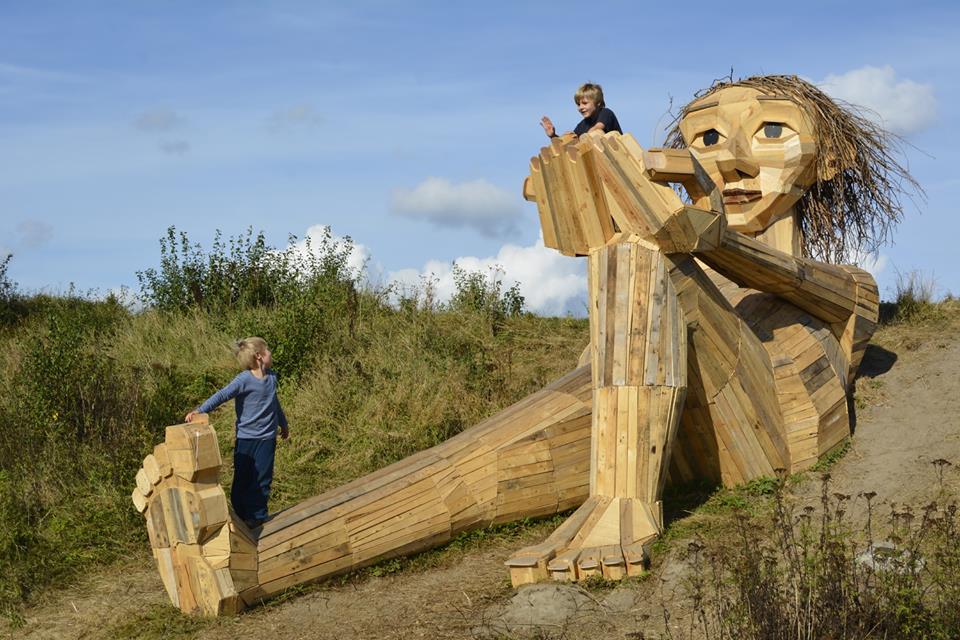 His work hasn’t only included giant upcycled wooden trolls — even though he’s completed 51 (and a half if you count the rebuild of Breckenridge’s installation) around the world. That line of thought came after many years where Dambo produced various kinds of street art.

It all started with his passion for hip-hop. He was a rapper and spent time with graffiti artists — some of whom painted enough high-profile walls to land criminal records and large fines. According to Dambo, “I didn’t want to be hated by society, so [I thought] maybe I could create art that is still in a public place but where people wouldn’t hate me.” His solution to this moral dilemma? Guerrilla-installed birdhouses. He built thousands of them, transporting them via bike and subway in Denmark to plant them in the streets. It was still technically illegal, but instead of fines or criminal charges, Dambo was thanked by people from all walks of life. In his words, “not everyone can understand graffiti, but even my grandmother understands birdhouses.” 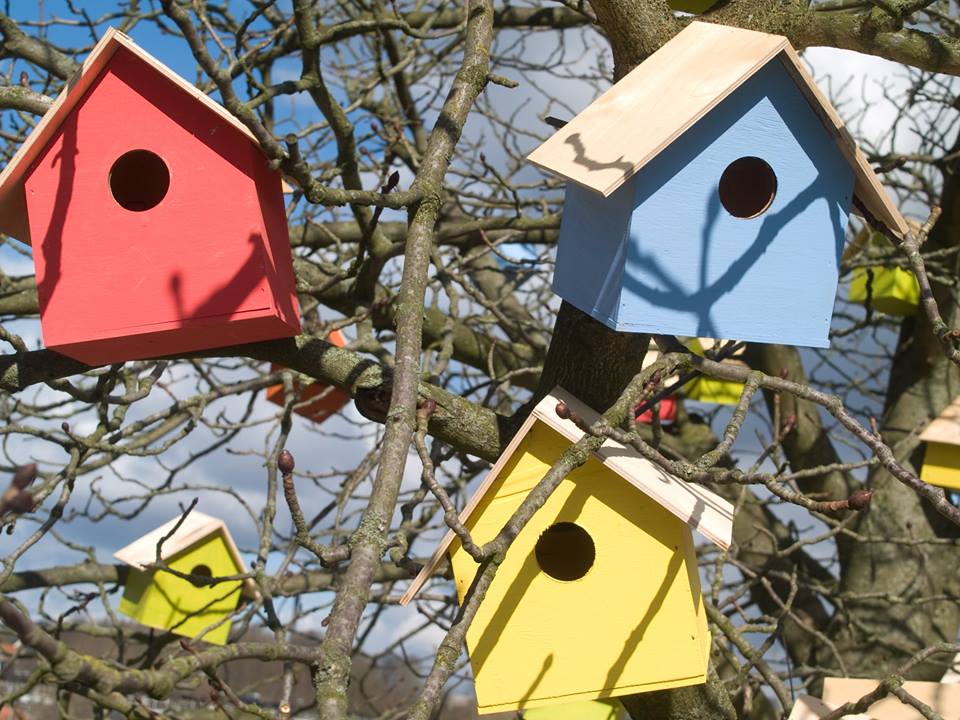 But the birdhouses were only the beginning. Dambo continued to construct three-dimensional wooden sculptures, using scrap wood and other recycled materials. Repurposing not only saved him money on the projects at the beginning (that were basically gifts to the public) — it embodied the way Dambo saw things around him. “Trash has value, and trash doesn’t have to be disgusting,” he commented. “Recycled things have more value — an emotional value.”

His recycled creations gained momentum, propelling him from a lonely rogue artist to the leader of a team of 35 employees traveling the world. Their expanse of projects included an interactive wooden wall that could be “painted” by switching reused plywood panels that revealed colors and an artificial forest made entirely of recycled plastic in Mexico, among others. 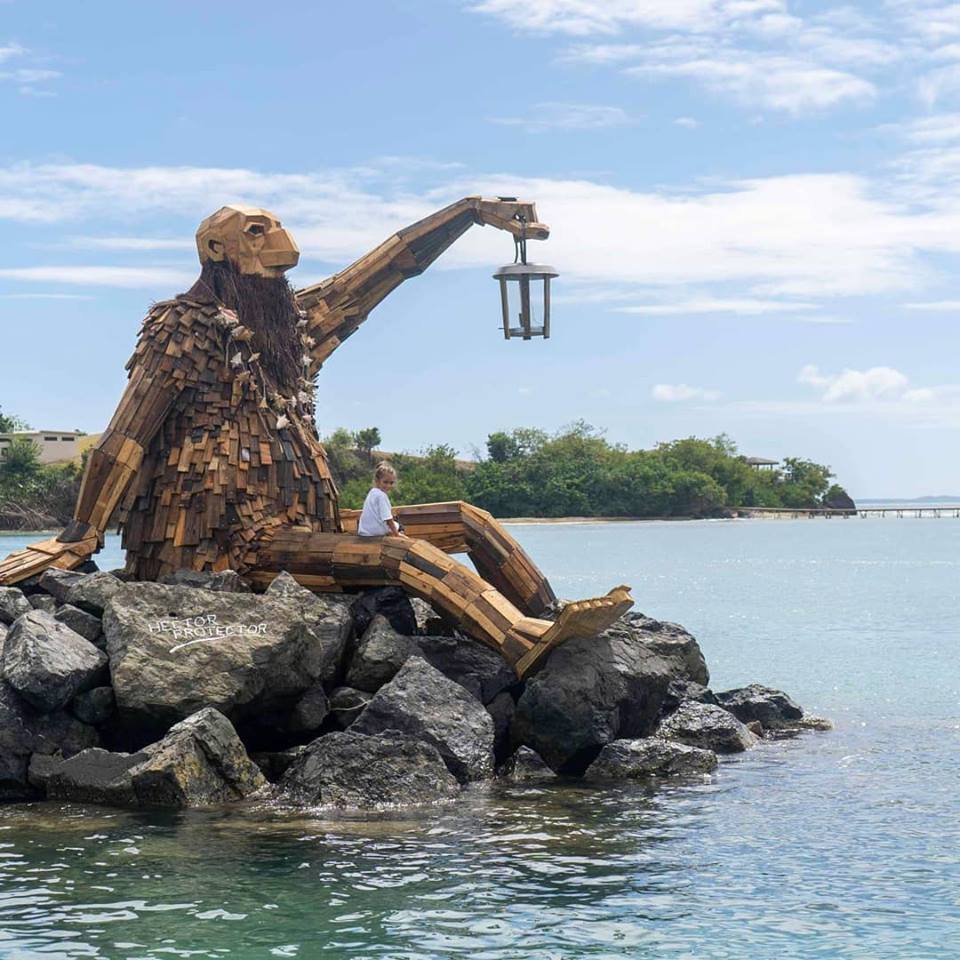 Then, in 2014, Dambo built his first troll out of recycled pallets in Puerto Rico — Hector El Protector. Now, more than 50 trolls later, Dambo’s art is scattered throughout the world, connecting all the disparate places with a tribe of recycled trolls. On average, a troll uses almost 100 pallets worth of wood, 25,000 screws and at least a handful of volunteers to make.

In August last year, Colorado entered into the troll tribe with Isak Heartstone. Dambo traveled to Breckenridge to participate in the 2018 Breckenridge International Festival of Arts (BIFA) organized by BreckCreate, where many art activations take over the area. But Isak was too popular. People traveled in herds to snap photos and climb on the troll’s limbs. Breckenridge was inundated with Instagram influencers and other troll-seekers.

Dambo, back in Copenhagen, wondered what was happening since none of his massive trolls or sculptures had elicited this kind of reaction before. “The sculpture became such a big success that a lot of people wanted to go and see it and then it became a liability, and some people didn’t want it there, and it became a big crazy thing,” the artist explained. He added, laughing, “for me, as an artist, this is the best problem that you can have in the world — that your art is so popular it’s breaking a town.” 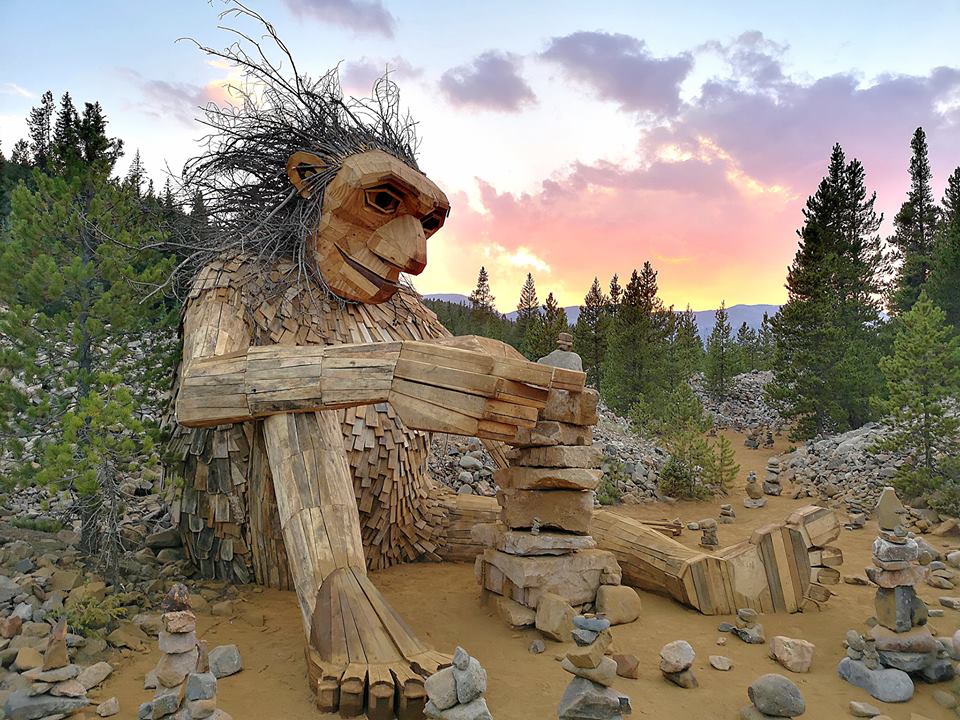 The first “Isak Heartstone” in Breckenridge

So the town of Breckenridge had to chainsaw Isak apart under the cloak of night because he was loved and hated, in nearly equal parts. But the problems that plagued the first iteration of Isak were surmountable, and the Town of Breckenridge worked with BreckCreate to relocate the troll. Then, they asked for Dambo to come back and rebuild in a new location at the beginning of this year. Now, Isak 2.0 is situated in Illinois Gulch, an area owned by the city that lacks the residential properties of the first location and has better proximity to public transportation and parking, plus a widened hiking trail leading up to it to accommodate all the interested visitors.

“I like to put my sculptures in nature, they all represent forces of nature,” Dambo remarked. “What I think is special about the people in Colorado is that it seems like you all like to bike and hike and go out in nature a lot.” And as a closing statement for his artist talk in Denver, he explained an audacious idea — “I think it would be cool to build five or 10 trolls in different faraway places across Colorado,” with the intention of making a network that would encourage people to travel between them on foot.

Until then, the second Breckenridge troll will open to the public on May 10.  The new location is behind the Stephen C. West Ice Arena on Boreas Pass Road. According to the Summit Daily, the existing trail will remain closed for another few weeks after the ceremonial opening on May 10 to allow for the town to widen the “Trollstigen” trail.

For more information about Thomas Dambo (including a map of where to find his various works), visit his website.