Review – P!nk Started A Party At The Pepsi Center

In a day and age when celebrities are constantly criticized on social media, there are few icons left that are totally unafraid to say what they really think. P!nk is one superstar who is — and always has been — fearless when it comes to telling the world how she feels. Throughout her nearly 20 year career as a solo artist, P!nk has always been unapologetically honest about who she is, what she stands for and what’s on her mind. She brought that honest energy to the Pepsi Center Monday night as a part of her “Beautiful Trauma Tour.” P!nk made us laugh, cry and most importantly she started a party that refused to quit.

Pop artist Julia Michaels opened the night, taking the stage around 7:30 p.m. The Grammy-nominated artist proved to the audience that she knows how to have a good time — and so does the rest of her band. Michaels and her band danced across the stage throughout the duration of her set. She played a variety of songs, some from early in her career and a few off her latest album Inner Monologue Part 1. She also performed a few popular songs she’d written for noteworthy artists like Selena Gomez and Justin Beiber, giving audience members who weren’t familiar with her music a chance to sing along. Whether the songs were popularized by other artists or sleepers from her own album they all had one thing in common: brutally honest discussion about emotions. Michaels clearly puts it all out there for her fans but that’s not to say she doesn’t know how to have fun — making her a perfect companion for P!nk on the tour. 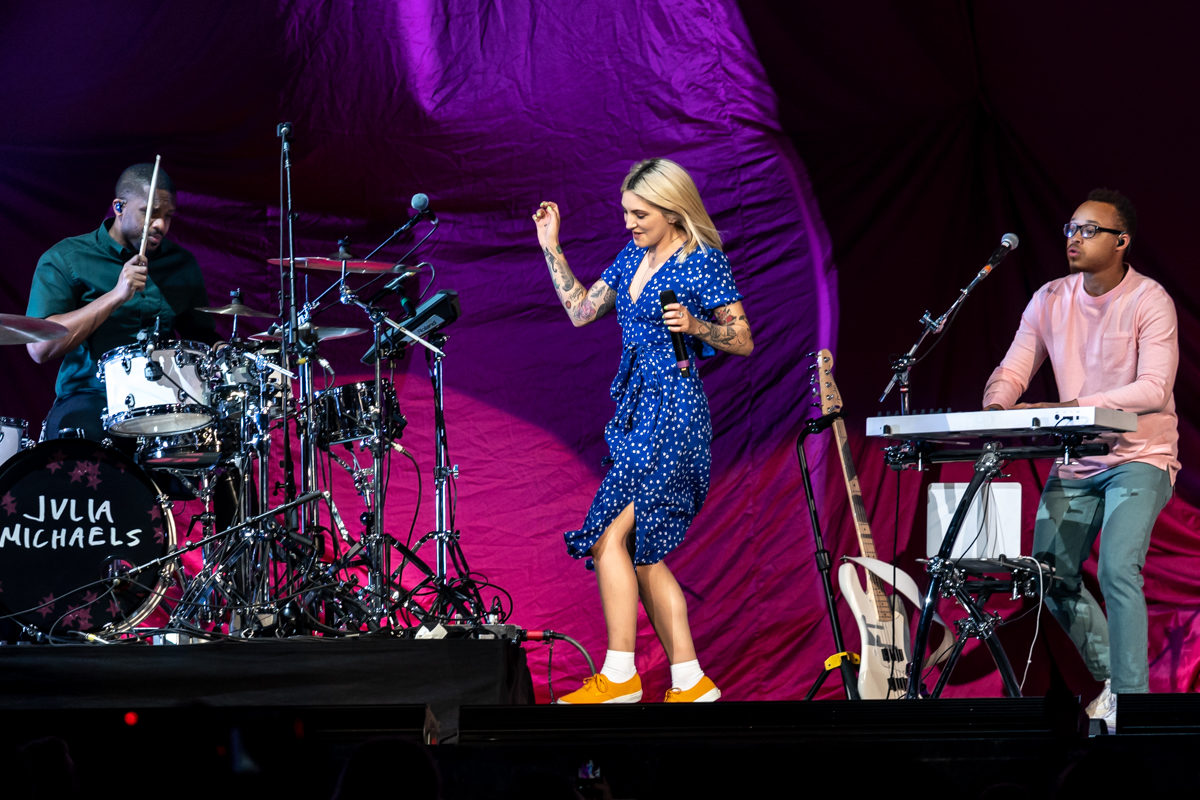 Michaels grooved across the stage, making sure to say hello to every section of the audience. There were even a handful of fans on their feet singing along throughout her set. However, the party didn’t truly start until P!nk made her way out. A solo man in a tuxedo took the stage, straightened his tie and proceeded to play the opening theme for 20th Century Fox on a recorder — it should have served as a sign of the show we were about to experience, but honestly, no one could have predicted what was about to happen.

Pink curtains hung covering the stage as Whitesnake’s “Here I Go Again” turned into a sing-a-long for everyone in the audience. Then, in an exciting turn of events, the song cut out, the curtains dropped and the show began. Truly, it was something out of a movie — and after the dramatic introduction we should have expected something like this, but we were woefully ignorant of the possibilities. When the curtains dropped, they revealed P!nk in a black-sequined jumper, swinging on a monstrous pink chandelier. 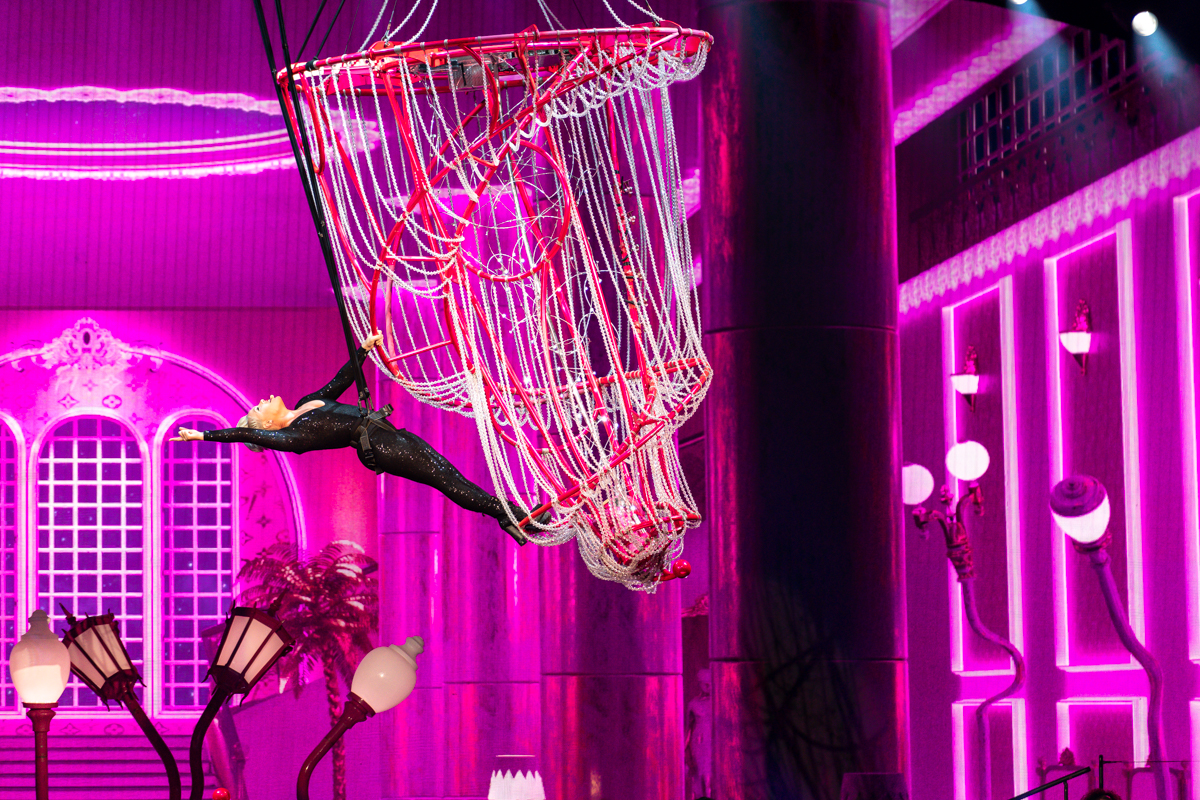 If the theatrics weren’t enough to signal the wild night we were all about to experience, she appropriately started the night with a hit from early in her career, “Get the Party Started.” P!nk promised us a party with the start of her set, and she certainly delivered. The stage was elaborately decorated, setting the scene for a truly wild night and just like in a movie the setting changed to reflect each new song. Accompanied by an incredible group of backup dancers, P!nk took control of the stage and encouraged us all to let loose and join the party.

“Feel free to lose your mind for the next four minutes,” she called to the audience before launching into a cover of Nirvana’s “Smells Like Teen Spirit.” While I can’t speak for everyone in attendance, I certainly took her advice. But the night wasn’t all fun and games. A true role model for all of us, she took time to discuss politics through a video montage. She even told a story about a conversation between her and her daughter, Willow, encouraging all of us to love ourselves and see the beauty in everyone. 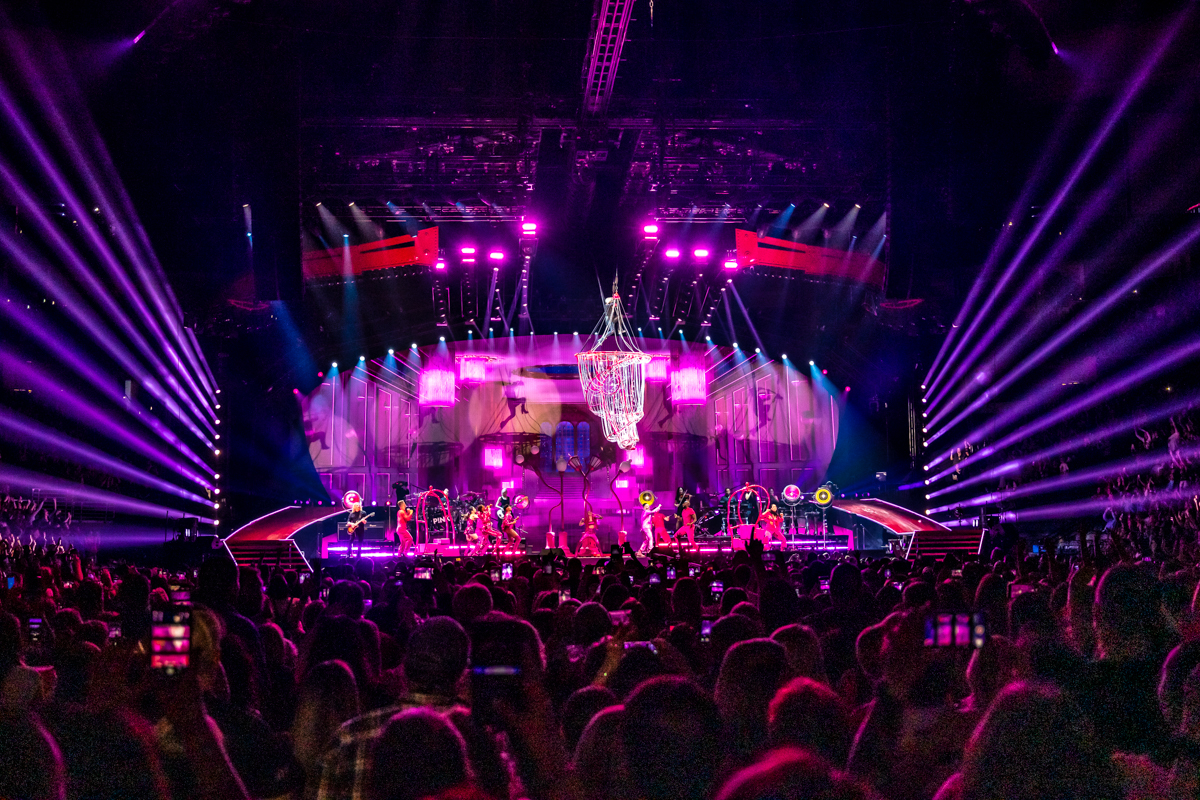 After a night of flying around the Pepsi Center in a harness, and performing aerial dances with her back-up dancers, P!nk ended the evening with a beautiful rendition of “Glitter In The Air.” She graciously thanked her audience and left the stage, leaving us all hoping there might be a second encore. Sadly, the credits rolled on the screen behind the stage, signaling that the show had finally come to its conclusion.

The performance lasted nearly three hours and in that time P!nk gave us all the feels. We laughed at the ridiculous props, like the giant puppet that rapped Eminem’s part of “Revenge.” We all got a little bit emotional when she talked about self-love and owning what makes us all unique. Finally, we all raised our glasses and partied with one of the most badass women in music.