Review – Aspen’s The Après Was Not For the Fragile

This past weekend, Aspen Snowmass hosted the inaugural The Après, a jam band festival that took place at the base of Buttermilk Mountain. Originally a push for business on a notoriously slow weekend for Aspen and its surrounding ski resorts, The Après Festival was an attempt by Aspen Snowmass to create their own WinterWonderGrass, with the result being a mix of good, bad, and wet. Considering that this was a first attempt, the festival seemed to be a relative success with three evenings of great music, regardless of certain logistical errors and weather-related issues that made the experience a little less than ideal.

The venue was fairly intimate, only consuming a small portion of the base of Buttermilk Mountain, which made it easy to hear and see the music from the crowd, the bar or the bathrooms. This was especially lucky, considering the restrooms were uphill from the stage, and a round-trip to and from cost you several minutes. Even more difficult were the conditions on the mountain, which had hundreds of festival attendees standing in ankle-deep slush for up to six hours each night. Regardless that the spring weekend was mostly sunny, there was much sympathy to be felt for the folks that came ill-prepared and without snow boots. 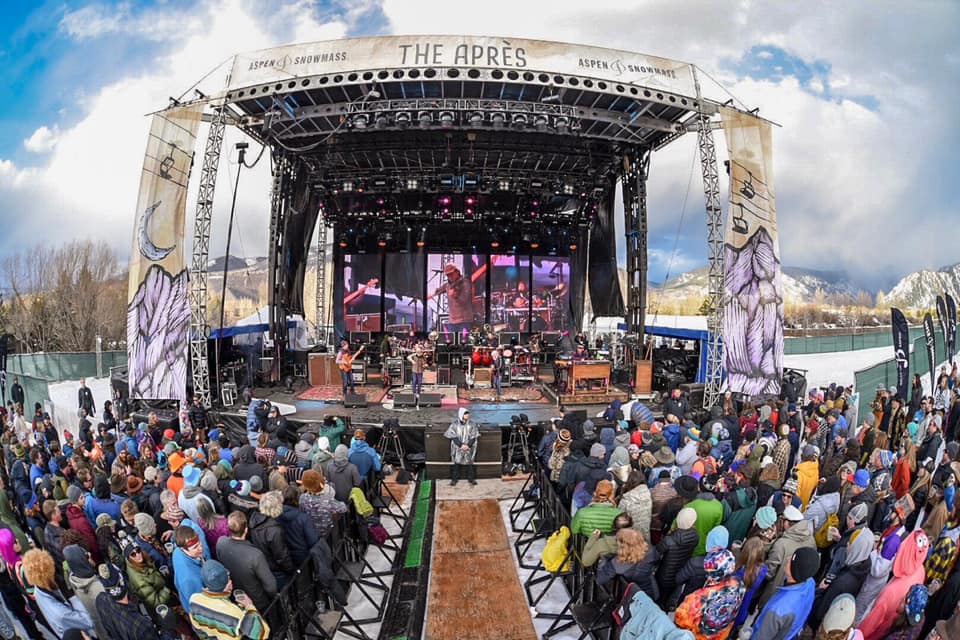 All things considered, however, an awesome time was had by all. The pre-festival began on Wednesday and Thursday nights with back-to-back shows from Umphrey’s McGee at the Belly Up, the iconic downtown Aspen venue that was also co-hosting The Après Festival. Chicago’s funk five-some The Main Squeeze kicked things off at the festival on Friday, with Moon Taxi following with a performance of their hit, “Two High.” Umphrey’s McGee was Friday night’s headliner, serving up some jam-rock tunes like “Plunger,” “Similar Skin” and “1348.” For those lucky enough to score tickets, Friday saw an epic and intimate late-night show from The String Cheese Incident at the Belly Up.

The Après had started off on a good foot, but Saturday at the festival turned out not to be for the inexperienced. The performance from Memphis blues band Southern Avenue ended just before the skies darkened over and a brief rain caused a delay in the String Cheese Incident’s headlining act. In just under three hours, the beloved local jam band ran through fan favorites like “Texas,” “Barstool” and “Shantytown” before the rain returned in full force to cut the show short. Without an encore, hippies by the hundreds trudged through freezing puddles before boarding the shuttles back to town.

Sunday saw much better weather, making it much easier to not only get to and from the festival, but to withstand the elements during day three. With the sun beaming across the mountains, ALO brought their own heat during both their opening set and while sitting in with the String Cheese Incident for a rendition of Jimmy Cliff’s “The Harder They Come.” To close out the festival, The String Cheese Incident treated fans to an incredible two-set show that included a “Birdland” opener, an incendiary “Howard” jam and a very fitting encore of “Colorado Bluebird Sky.” The bands and the fans all did a stand-up job embracing the ups and downs of a first-time outdoor festival in the mountains, and whether or not The Après returns next year, the inaugural weekend was an overall win and a great time.