In art,  it can be especially difficult to remind ourselves to think about how and why something is made. We see a painting after the last brushstroke, we see a sculpture after it’s been cast — but all the hours before that are hidden and, often, overlooked. The same goes for crafts like ceramics, jewelry and — highlighted in a new art exhibit in downtown Denver — projects with paper. But this new gallery exhibition is not just a study in craft making, it’s an ode to the politics behind it. And, it’s an ode to the artist’s heritage, lifestyle and personal taste in art. 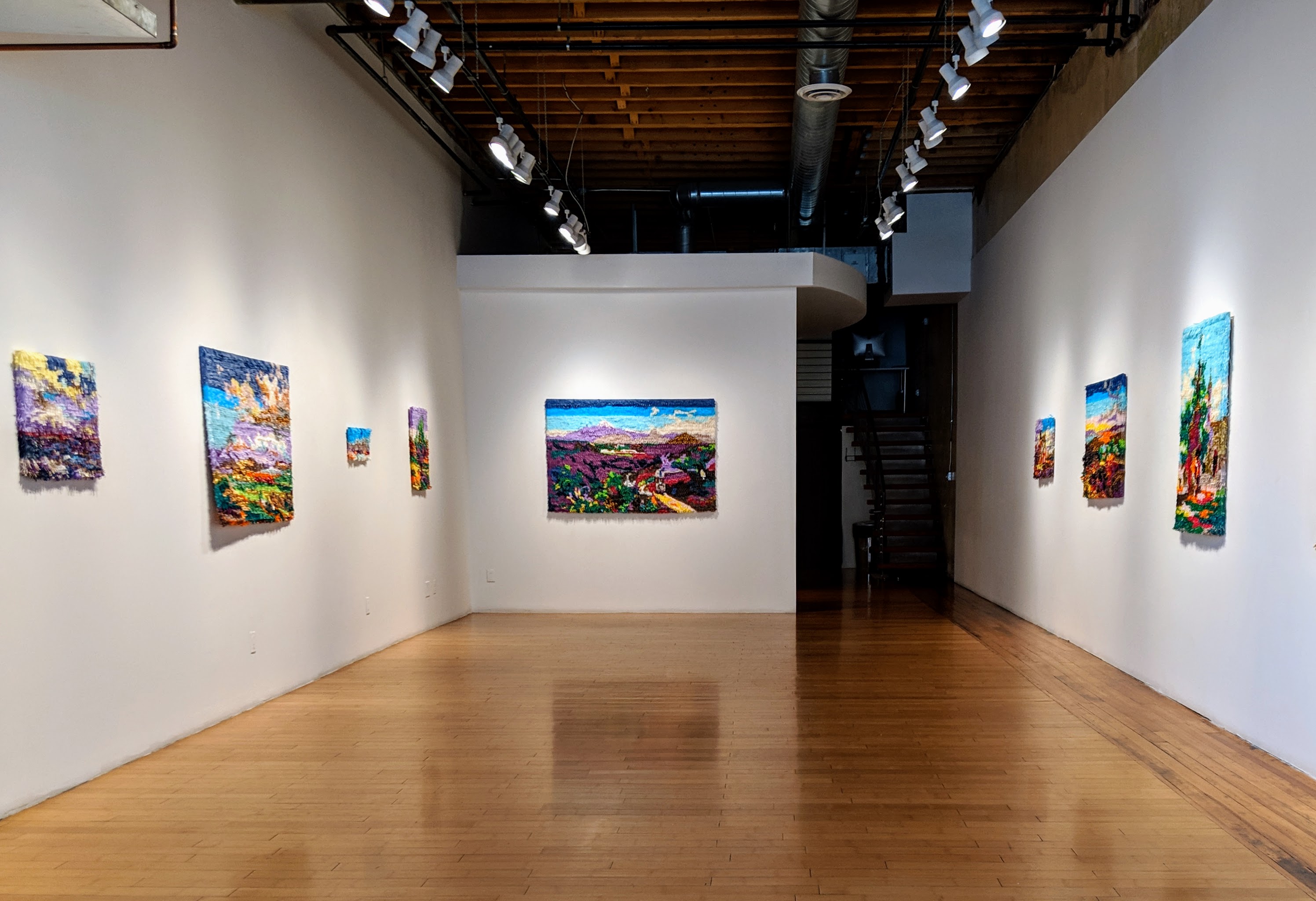 The artist with work on display is Justin Favela, who was raised in Las Vegas but considers himself a Guatemalan-Mexican-American. His resume consists of a lengthy list of exhibitions and events, including a site-specific installation at the Denver Art Museum in 2017 as part of the Mi Tierra: Contemporary Artists Explore Place series. It was at that installation that local gallerist David B. Smith discovered a passion for Favela and his politically-charged and aesthetically-pleasing work — leading to the current showcase, Re/Presenting Mexico: José Maria Velasco and the Politics of Paper. On view until May 4, this exhibition showcases 14 individual piñata paintings that are all modeled from famous late-nineteenth-century Mexican nationalist paintings by José María Velasco. 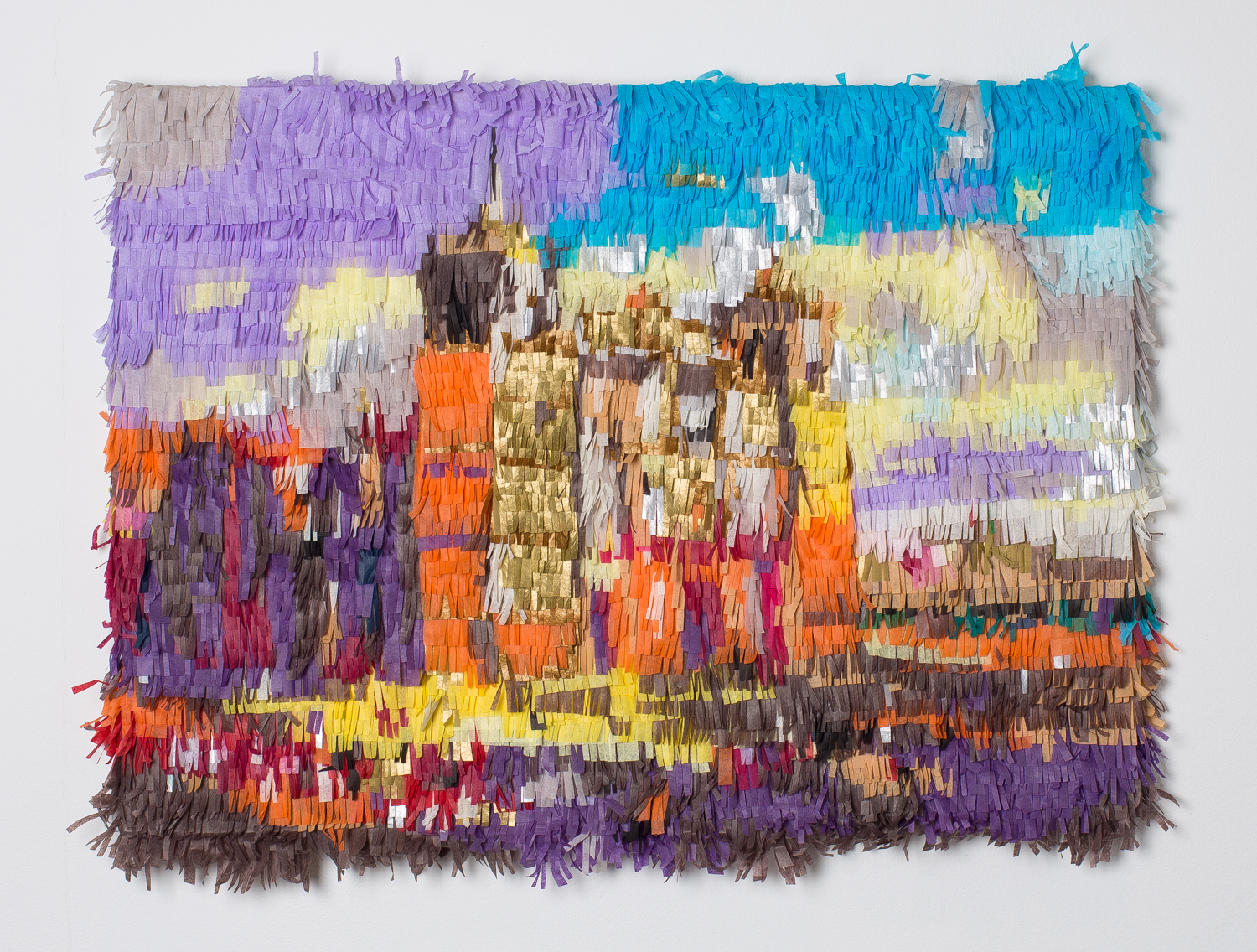 To fully grasp the significance of Favela’s work, it’s important to have a small history lesson about colonial Mexican art. Reaching back to the 16th century, art in Mexico was stratified by whether or not the creator was from European descent or was Native. The former was deemed as fine art, and therefore, the only kind that garnered attention from art historians and cultural elites. Everything else fell under the label “popular” art — or art for the people — and existed on the peripheries of canonization. This intensified for hundreds of years (all during colonial rule) and laid the groundwork for the nationalist paintings that Velasco produced to be shown all over the world as the de facto representation of Mexico in the late 1800s.

Velasco became famous as a landscape painter in Mexico in the mid to late 1800s and during his “academic period” from 1860 to nearly 1890, he produced a series of landscapes that would forever change the perception of the country. He was fortunate enough to be able to study under a celebrated Italian landscape artist, distinguishing him from those who were making pop art. His long career — beyond the series specifically discussed in this article — elevated him to international recognition and earned him a place in the accepted art history of Mexico as a foundational figure.

The series of nationalistic landscape paintings were highly propagandistic, depicting different Mexican locales as pastoral, romanticized and highly in favor of the aims of the government. Instead of showing the truth behind relations between natives and colonists, the scenes were oversimplified and characteristic of the entrenched hierarchy of Mexican art to that point.

But the plot thickens, especially in the context of Favela’s art and medium of choice — piñata paper. Before Europeans arrived in the Americas, hints of what we now understand as the piñata tradition — hitting a receptacle while blindfolded to break it open and reveal treats — existed as a celebration for deities. The idea of hitting a suspended receptacle (at that time, it was clay pots) took place in other places in the world as well — most notably China. However, the specifically Latin American tradition was twisted by European settlers who used the already-strong acceptance of the festivity to promote Catholicism while shunning indigenous beliefs.

In today’s world, the piñata has lost much of its political and religious vigor and instead acts as one of the many stereotyped mascots for Mexico. But the bright colors of the tissue paper, the overall shapes and the act of breaking it open hold the weight of nearly 500 years of institutionalized misrepresentation of Mexican folk art. Cartonería — the field of papier-mache sculptures, including piñatas, masks and dolls — is strictly classified as pop art, with an emphasis on pop and a grimace on art. The problem is that this wholehearted denial of cartonería’s significance stems from the extremely exclusive ideology of a racist past.

So it is with all of this in mind and more that Favela sculpts his piñata paintings. He reproduces the famous Velasco scenes, row for row, replacing the dull and dated landscapes with highly saturated tissue paper fringe. Is it pop art or is it fine art? The answer isn’t clear — and Favela wants it that way. By breaking down the elitist vision of colonial Mexico with the tools of folklore, Favela is presenting both an outcry of discrimination and a hopeful vision of re-appropriation. He doesn’t mock Velasco — indeed, his reproductions are sometimes even more romanticized than the originals — but he does use some kind of humor to express his feelings about the complicated history of Latinx culture. 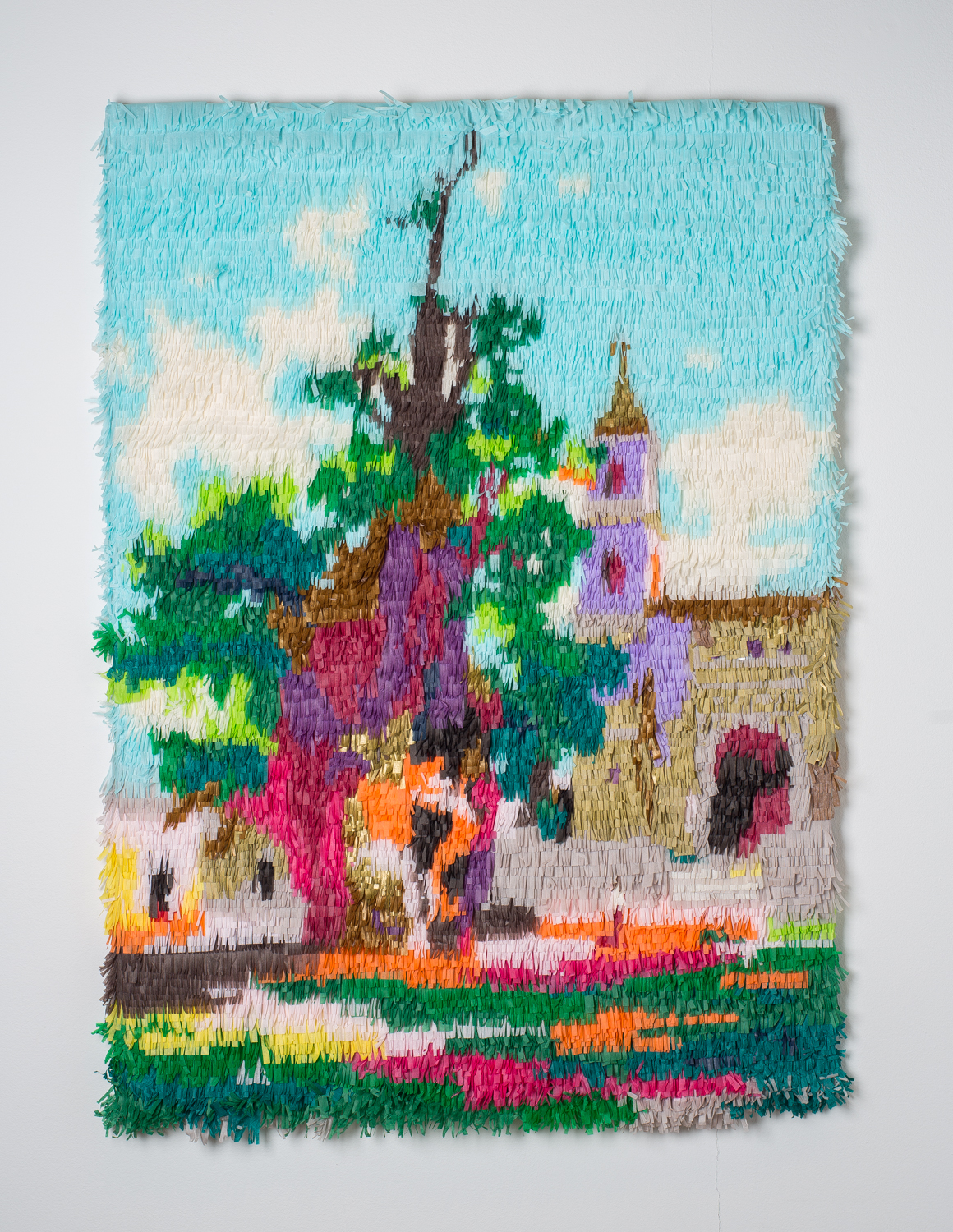 Each piece consists of layered tissue paper, at times in basic gradient rows and at others in an intricate ombré. Small details, like the branches on a bush in Cardón, after José María Velasco, betray Favela’s meticulous technique. Other details betray the artist’s upbringing, in the city of sin, where cultural icons are portrayed with little thought to their significance or context. He admits to coming from the “land of appropriation” and with that in mind, he playfully uses stereotypes (like piñatas and nachos) to represent foundational parts of his identity. And every once in a while, he uses splashes of gold or silver tissue paper — a touch that might have something to do with his familiarity with the Las Vegas Strip.

This is the kind of exhibition that galleries should focus on. Not only is it pretty to look at and easy to approach, it recontextualizes the very idea of gallery art. No longer should galleries be used as places to display “safe” art for rich collectors — they can probably find what they need online anyway. It is time to let “popular” art into the gallery system — and hopefully, change the system in the process. Like many different forms of pop art that have come to revolutionize culture — from rock n’ roll to Andy Warhol to street art — the issue of whether Favela’s piñata paintings are of archival quality, or considered “high art” actually reinvigorates the purpose behind them. 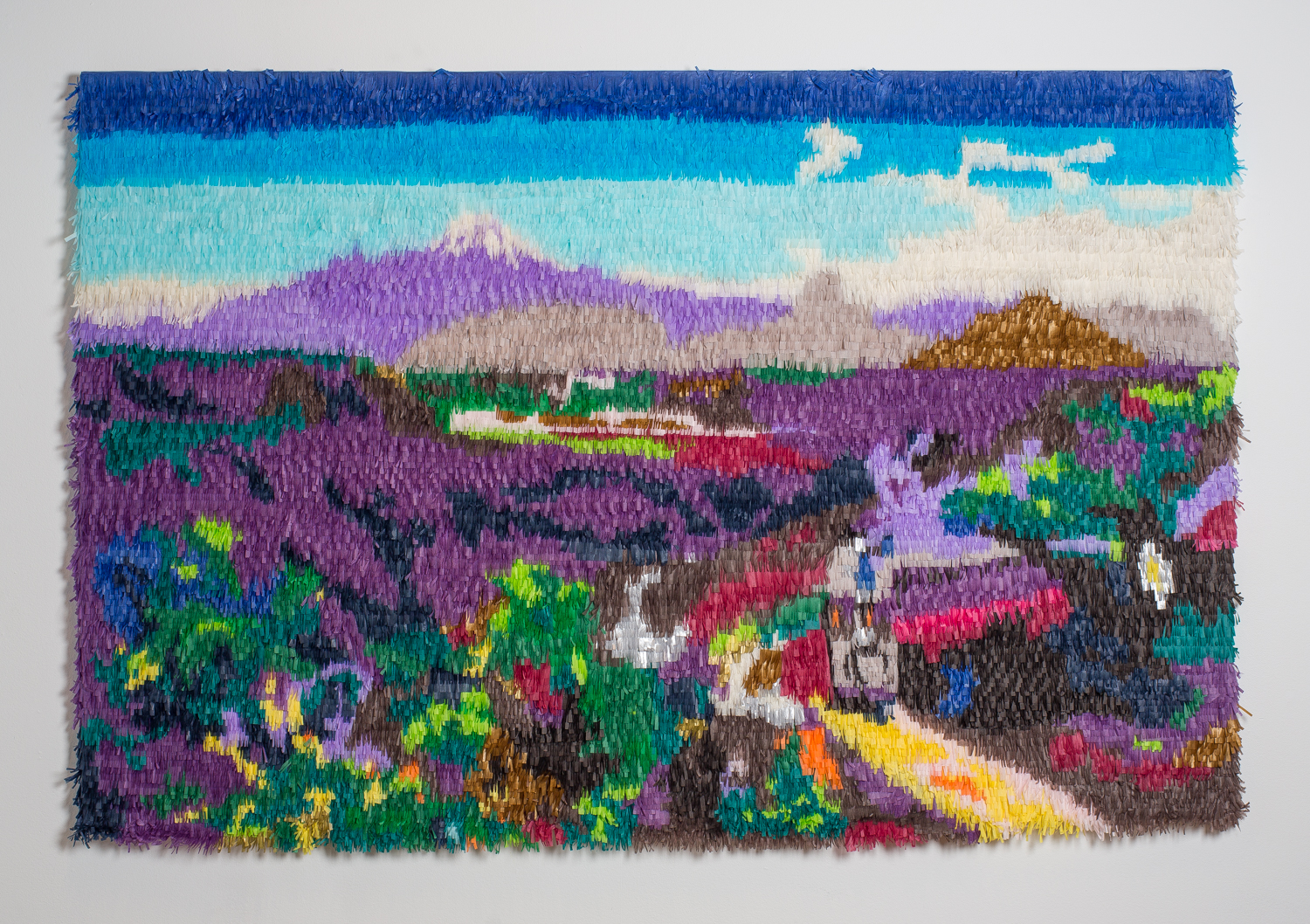 Re/Presenting Mexico: José María Velasco and the Politics of Paper is on view until May 4 at David B. Smith Gallery, located at 1543 Wazee Street. It is free and open to the public.

All photography by Matthew Pevear, courtesy of the artist and David B. Smith Gallery