Into The Wild West With Cisco The Nomad

If West Colfax had a voice, it would sound a lot like Cisco the Nomad’s. The rapper and singer, known to most as Clay Edwards, is a walking contradiction — not unlike the long stretch of cement and asphalt he’s called home almost all his life. The son of a barista and a bus driver who attended the prestigious Colorado Academy growing up, of mixed race, finding himself too white for the black kids and too black for the white, Edwards has long existed in a dichotomy. Growing up poor, among very rich kids, on a street that notoriously juxtaposes wealth and poverty depending on your viewpoint, Edwards proudly touts his hodgepodge of an identity. Even the music he creates seems to pendulate, as he can monotonously spit bars in semblance to Tyler, the Creator then, turn around and soulfully sing-rap a la Chance the Rapper over nothing more than an acoustic guitar.

With a name coined from Francisco el Hombre, a fictitious traveling musician from Gabriel Garcia Marquez’s famed novel, 100 Years of Solitude, the “loud kid from West Denver” traverses these realities with a pen to paper and a story to tell.  The mixed lot he embodies doesn’t impede Edwards in the slightest, in fact, it’s what makes him one of the most fascinating voices in Denver hip-hop. 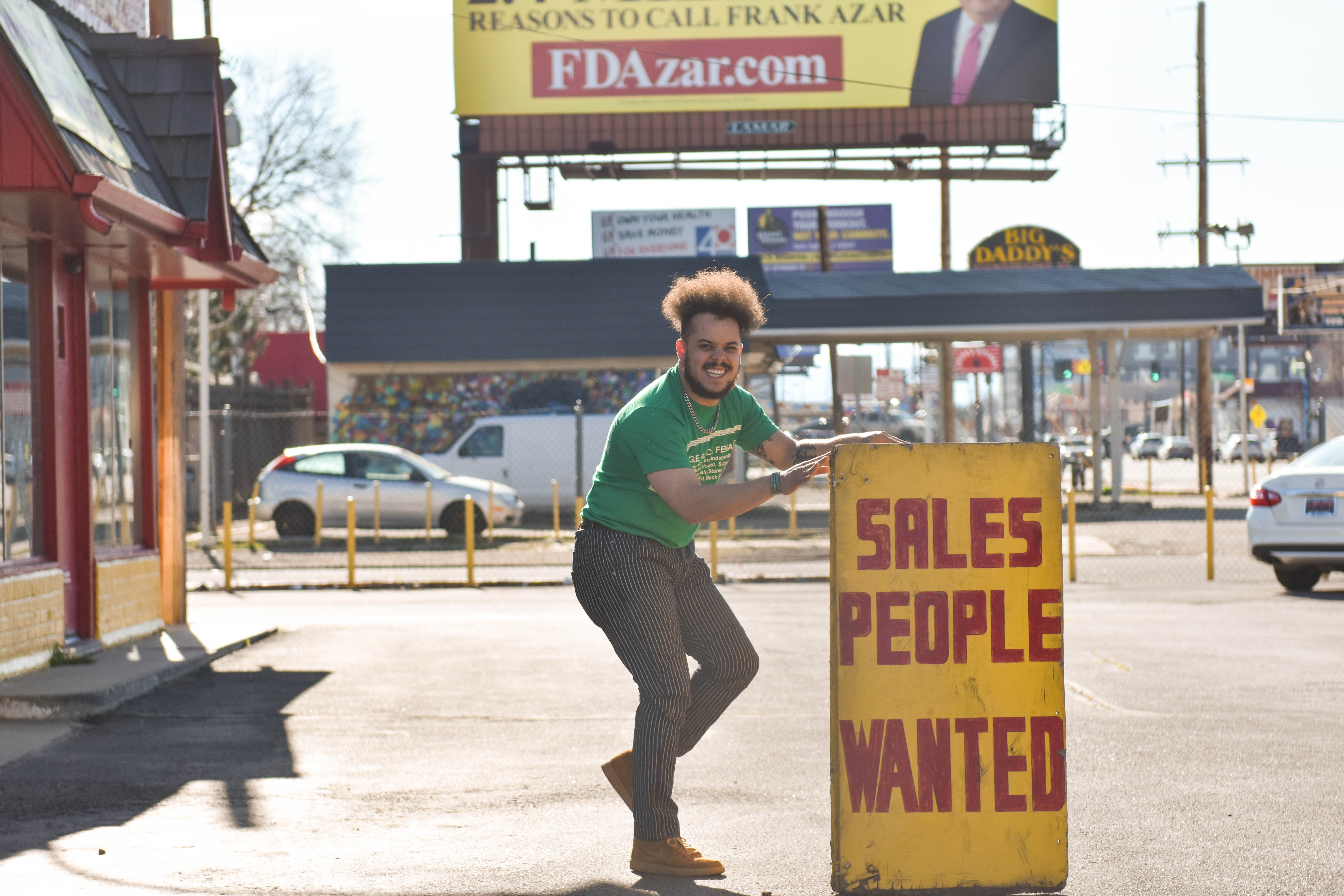 Five-foot something with a high-top afro left to its own devices and a razor-sharp presence that oscillates between far-too-serious and all too funny, meeting Edwards is disarming, to say the least. A character in person and on stage, it comes as no surprise that Edwards holds a BFA in acting, but Cisco the Nomad is anything but an act — if anything he’s the fall guy.

“A character gives you the outlet to be able to say things differently than you would in person. It’s a hat I can put on when I want to really talk my shit and not be nervous about Clay having to deal with the repercussions if that makes any sense. I’m a kid who grew up poorer and I went to school with all the richest kids. I only ever really found my light through performance.”

Growing up off old Motown records, and forbidden from listening to hip-hop, Edwards couldn’t stay away from the unknown — buying, hiding and stealing records that he’d eventually memorize through the many nights of his youth. Discovering a knack for freestyling, a talent he’d pick up from his vinyl benders, and seeking refuge amongst poets in locales like the Mercury Cafe, Edwards found his audience in hip-hop. 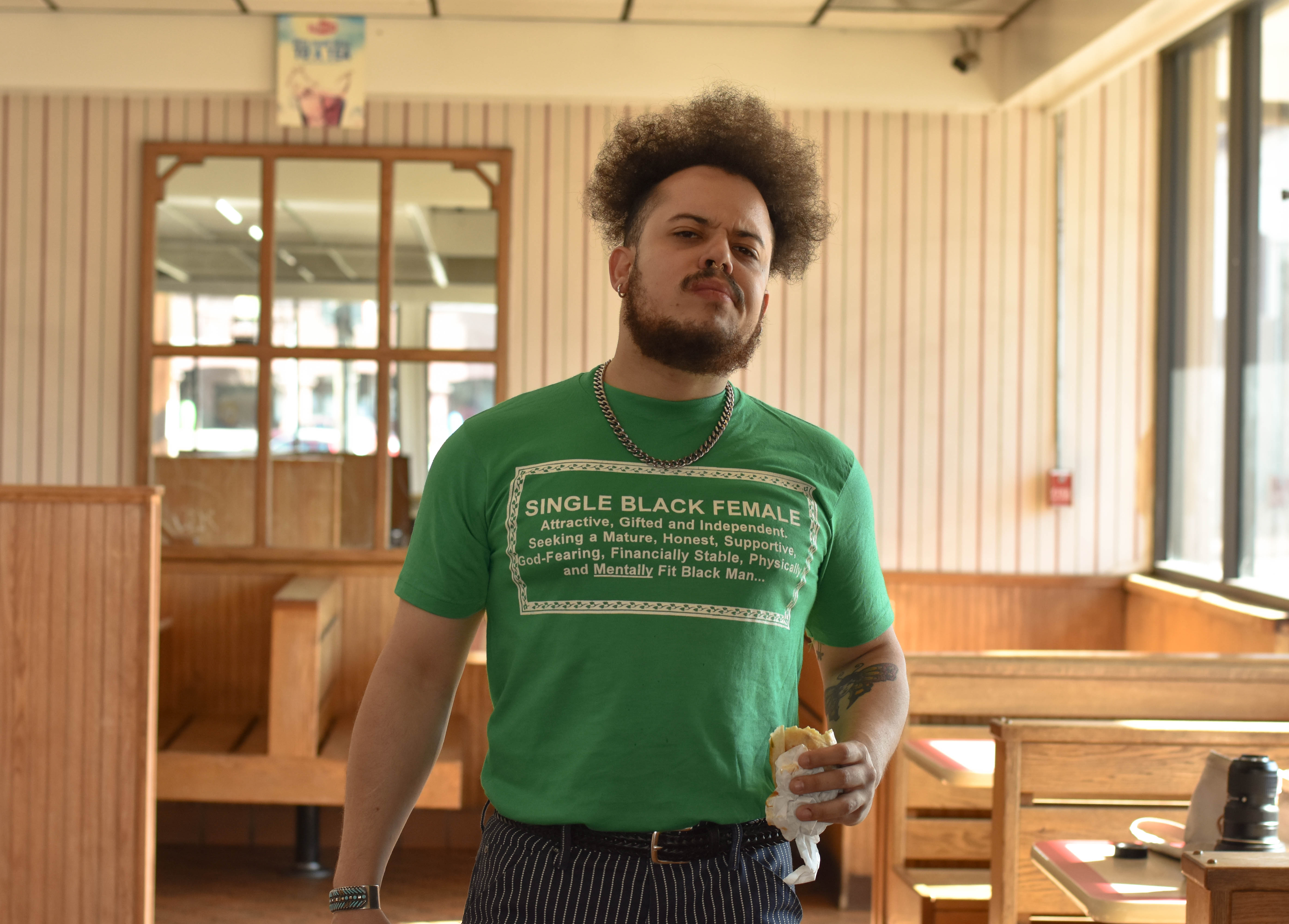 Finding his voice and exploring it as a student of hip-hop as a genre, he consequently also found a lack of a cohesive voice in Denver’s hip-hop scene.

“We can talk about a specifically LA sound, we can talk about chopped and screwed music as a specifically Dallas sound, but you can’t say anything about Denver and Denver’s like that in a lot of ways. I’m of Denver, I grew up on the city buses at 4:30 in the morning and clean through getting home from school late at night, you know, I love this city, however, when I was looking to find a way to identify with it and found nothing when it came to the music I wanted to make, that was a bit of a shock. But, when you’re shocked that’s the moment right before purpose shows up.”

The purpose he did find — to speak on the city, and the way of life he loves. Time has changed, however.  The city and street the Edwards grew up around has changed. Gentrification has stepped in and continues to morph the landscape that molded some of his fondest memories, stripping the roots and a culture that Edwards remembers. Edwards makes no uncertainties when he proclaims the life and people that fill those memories never left, the natives that colored West Colfax are still there. His mantra of late, “Free Denver,” is his battle cry. Not to die on his own sword, Edwards instead wants Denver to “speak for itself a little bit when it comes to the artistry of the sounds and the music especially.” 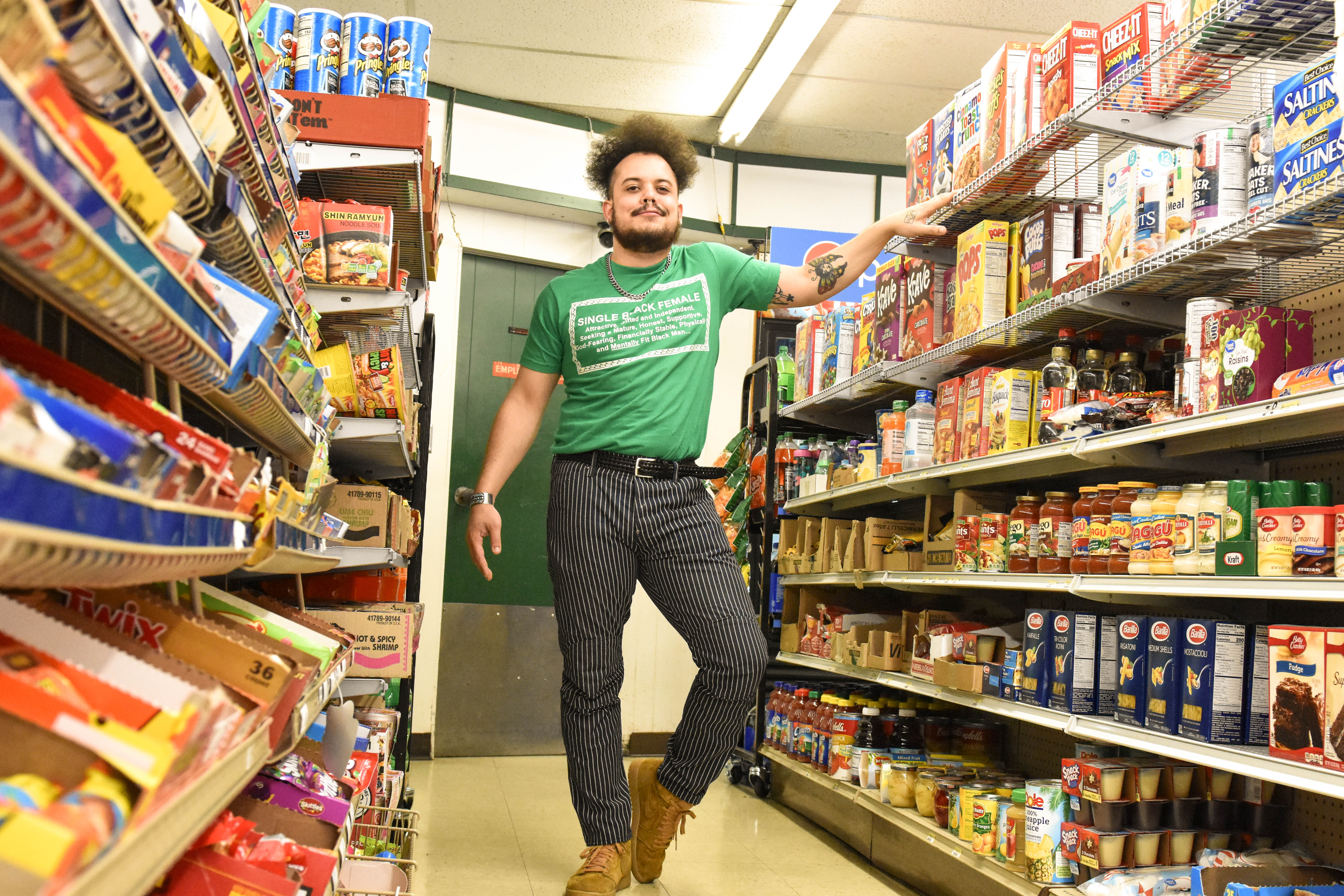 “We would order research chemicals or mushrooms off the dark web — we were children,” says Edwards recalling his days hanging at his friend’s penthouse in Downtown Denver growing up. “We would take them and we’d stand on his balcony and sometimes the fireworks with Coors Field would come and hit us in the face. We would leave his house and we would go and walk along the 16th Street Mall, go and just make friends, get chased by horses and stuff. The thing is, we would be fucked up teenagers on the loose, and because we looked a little clean, people didn’t pay any attention to us, and I think that’s kind of a microcosm of Denver. Something really messed up underneath, but as long as lists a little clean, people will walk by and go, ‘oh, what a lovely place that is.'”

This is one of Edwards favorite memories of Denver — an underbelly, the Wild West, and if anything, its a testimony to the beauty and dichotomy Edwards sees in the place he loves, and perhaps, the reason he’s stayed so long — he’s cut from the same cloth. 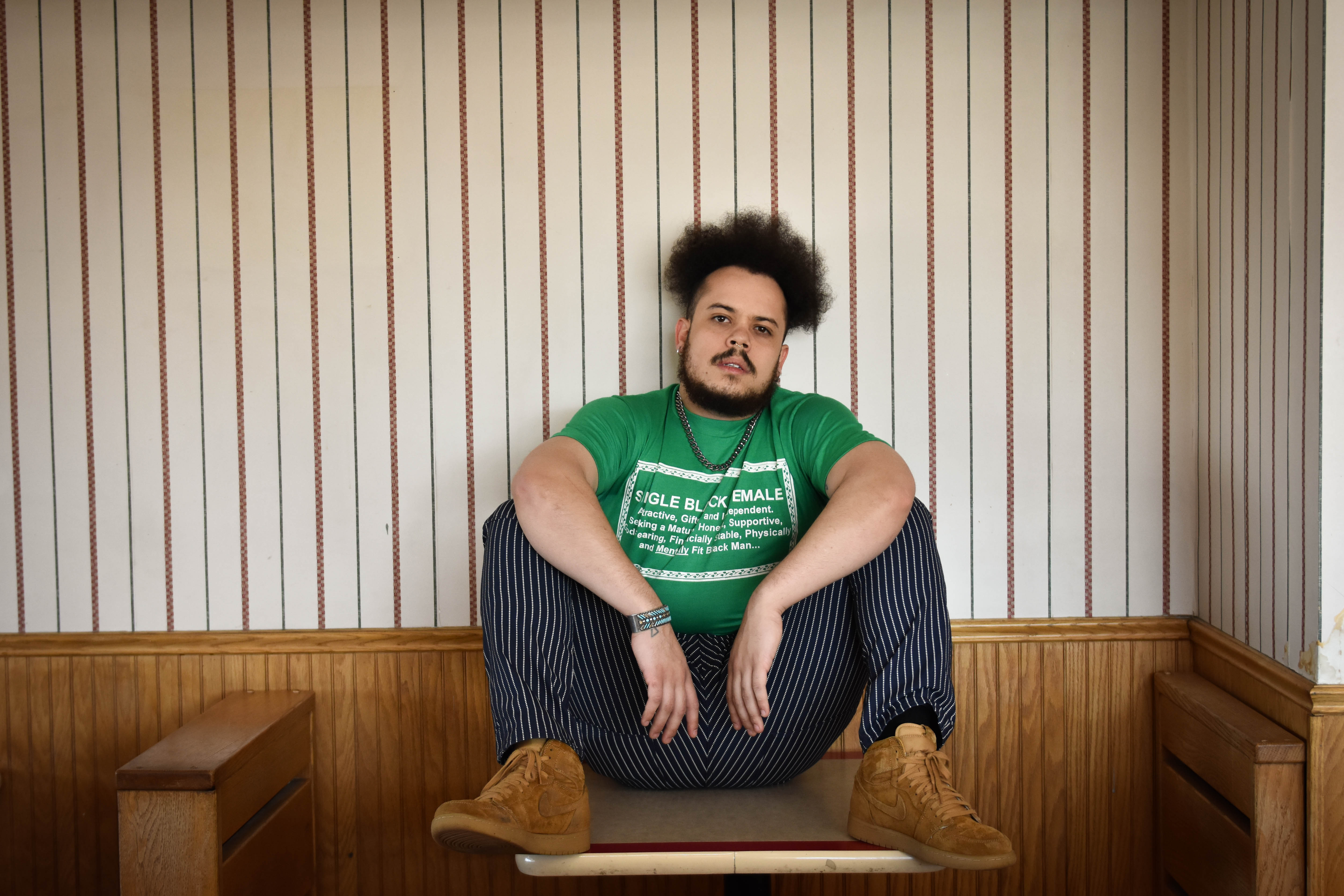 If there’s one thing that hasn’t been mentioned about Cisco the Nomad, it’s the crazy look in his eyes when he talks about the city and his propensity to create. He’s of a rare breed — a do or die performer, one who sees his artistry as “the only thing he can do” and what’s more, the only thing worth doing. Blood, sweat and tears are the foundation of his work, his struggle and his solace. He finds hope to push forward in the unlikely  — plants, likening his pursuit of meaningful recognition to a tree on a shore reaching its roots to water that is a little out of reach. He knows, much like the plant does, what a shot in the dark means, but has the audacity to take it anyway because that’s all he knows.

“My whole identity as a person is tied to my ability as a performer and as a creator, a writer, for as long as I can humanly remember. If I wasn’t doing this, you know, I’d be a fish out of the water, just gapping with nowhere to go. I think there’s something inside me that needs to talk about what it’s like to deal with a lot of dichotomies. I know what the best looks like and I know what the worst looks like, there’s a lot of grit in there, there’s a lot of crust in there — you ever see something nasty that needs to be cleaned?”

So, what then does Cisco the Nomad look like when he reaches water?

“Somebody who walks right up to everybody, grabs Lil Yachty by the nuts and says ‘fuck y’all,’ visit Denver, we’ve been here.”