During his lifetime, Norman Rockwell was a well-known illustrator who appealed to the masses but did not impress critics or serious collectors. His images appeared often on the cover of The Saturday Evening Post, portraying scenes of American life — which were sometimes considered sentimentalized and kitschy. But even if some naysayers rejected Rockwell as a serious artist during his highly prolific creative career (he produced thousands of original works in his lifetime), his ability to inspire vast swathes of people with his paintings can no longer be ignored. He was responsible for Rosie the Riveter, illustrations for six decades in the Boy Scouts of America publication, advertising for Coca-Cola and portraits of Presidents Dwight D. Eisenhower, Lyndon B. Johnson, John F. Kennedy, Richard Nixon and then Governor of California, Ronald Reagan.

“Recent scholars have recognized that Norman Rockwell was much more than an illustrator,” said Timothy Standring of the Denver Art Museum (DAM). He is co-curating the exhibit Norman Rockwell: Imagining Freedom with the Norman Rockwell Museum, on view in Denver from May 3 to August 23, 2020. “His ability to create powerful imagery and appeal to mass audiences about notions of civil discourse helped a country come together and rally for the greater public good. This incredibly difficult task of bringing people together makes his work relevant today, and ensures his inclusion in the canon of important American artists,” Standring explained in a press release. 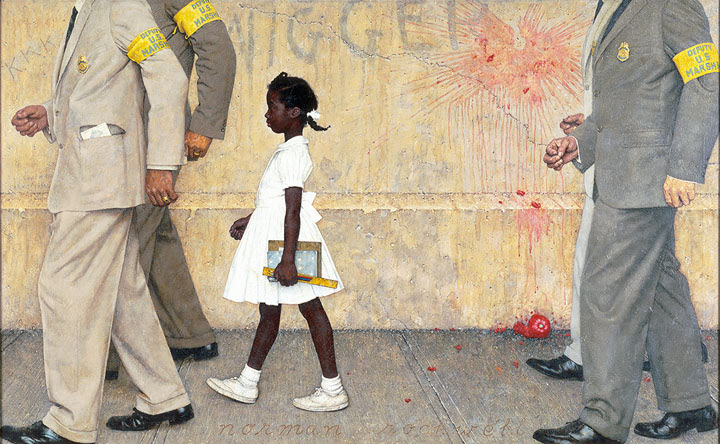 The exhibition is inspired by a series Rockwell completed in 1942 after President Franklin D. Roosevelt beseeched the artistic community in the US for help spreading the ideals of the “Four Freedoms.” At that time, those ideals — Freedom of Speech, Freedom of Worship, Freedom from Want, Freedom from fear — were not widely accepted as American. But after Rockwell painted four separate paintings embodying those freedoms and published them in The Saturday Evening Post, their success reached unimaginable heights. After this, Rockwell began in earnest to visually communicate the idea of freedom and the common good.

Part of the exhibition will include Rockwell’s 1961 Golden Rule, which features people of all background, race and age with the quote “Do Unto Others as You Would Have Them Do Unto You.” Another painting that will be included is The Problem We All Live With (1964) — the iconic image of a six-year-old walking to an all-white school, escorted by police. According to the DAM press release, “It is considered one of the most iconic images of the Civil Rights Movement in the U.S.”

Other works by Alfred Charles Parker, J.C. Leyendecker, J. Howard Miller and Martha Sawyers will also be on view, helping to showcase how Rockwell and his contemporaries catalyzed the Four Freedoms through their creative enterprises. Even though these artists were active a lifetime ago, their efforts to bring Americans together can still be felt today. And in this incredibly tumultuous period of history, a reminder that we have already had to fight for the acceptance of our freedoms should incite action for us all.