You might’ve frequented trampoline parks when you were younger or maybe even recently while babysitting, but DEFY Thornton Extreme Air Sports is the new gym on the block that promises you won’t smell like sweaty feet or hear screaming kids (well, there might be some yelling).

DEFY’s Thornton location recently opened this past August, and it’s definitely a kid-friendly recreation area, but also a cool hangout to take your much older friends. Fans of game shows such as Wipeout and American Ninja Warrior can now show off their agility skills with a wipeout machine, 28 trampolines, zip lines, foam pits and much more. 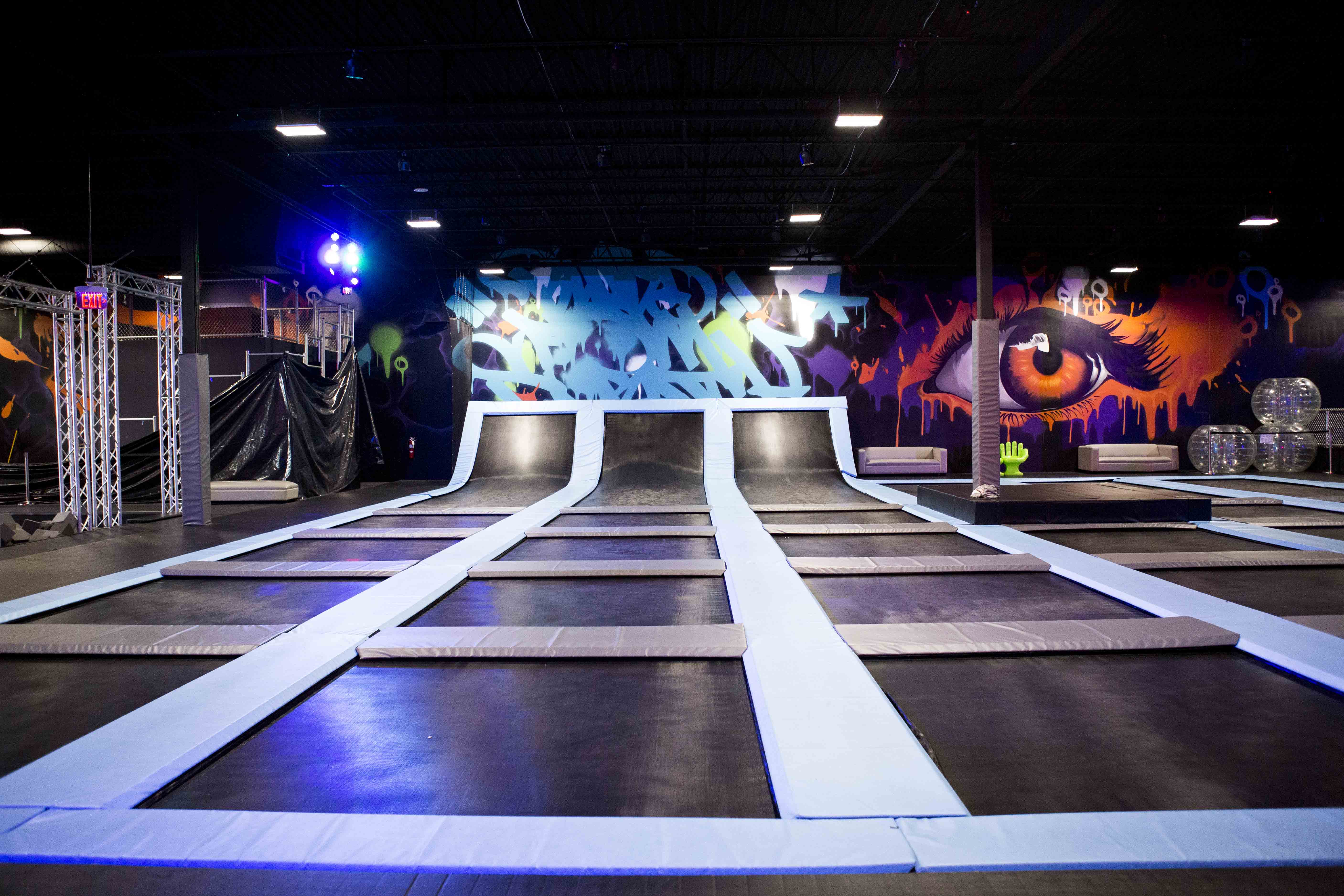 DEFY, a new brand of CircusTrix — a recreation company that builds indoor trampoline and extreme recreation parks — isn’t the first trampoline gym of its kind in the Denver metropolitan area (there’s a similar park in Aurora called Spider Monkey). But Michael Knight, General Manager of DEFY Thornton, says this one looks very different than other CircusTrix locations.

“It’s a little bigger. We have some attractions that they [other locations] don’t have. With each new park, we add new attractions,” he said.

Knight says that providing the ninja warrior-inspired obstacles is a huge draw for those who want to literally defy the limits of what they can do on an average trampoline. The park is designed to test your abilities in terms of strength, agility and endurance. It’s also quite the adrenaline rush. 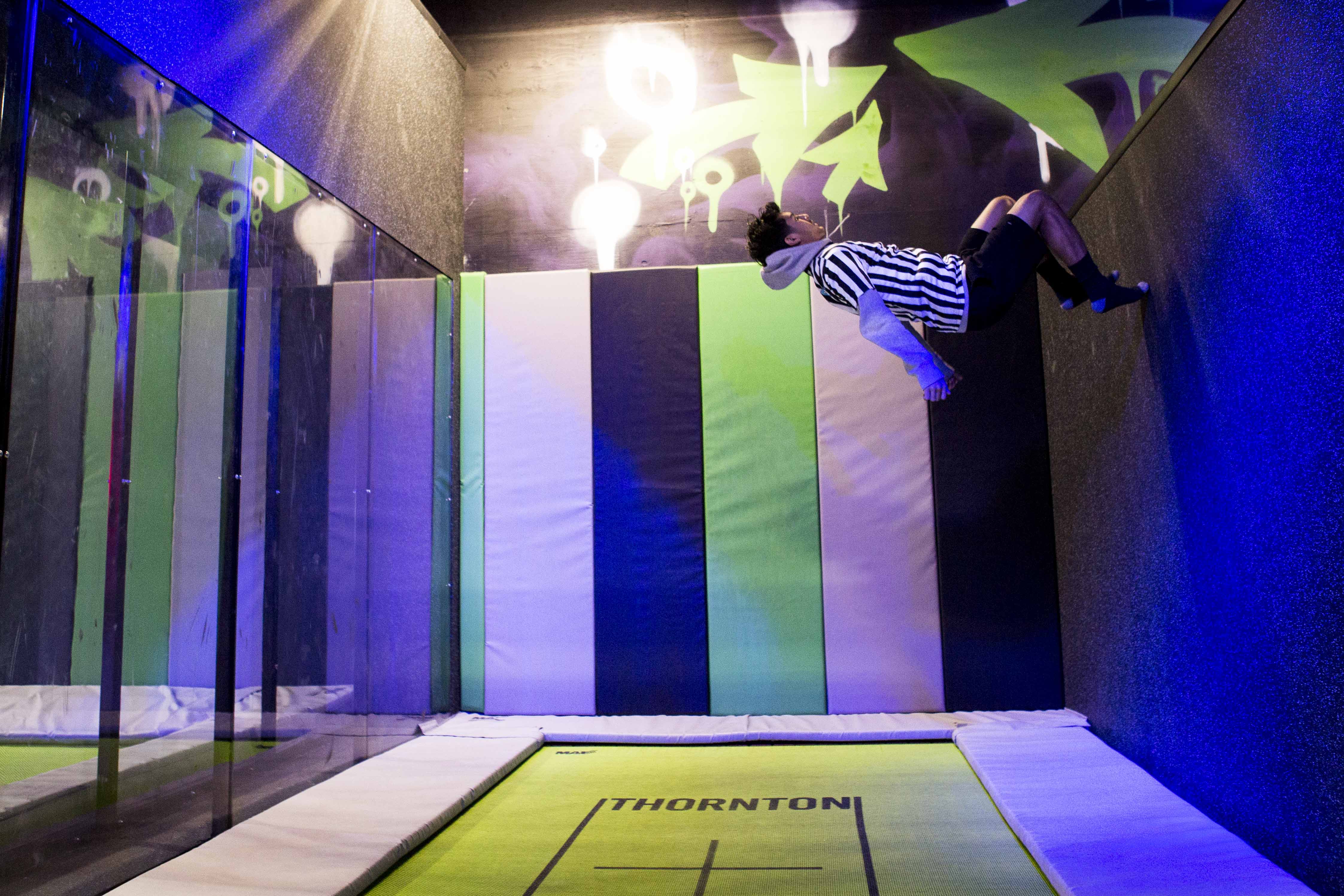 “We’ve got our zip lines — those are pretty fun. You’re not harnessed in. All of our attractions really tailor to giving you a little hit of adrenaline. Our stunt fall is really fun. You climb up a bunch of stairs that’s probably 10 feet up. We have an airbag that you’ll jump off of. It gives you the same feeling as dropping on a rollercoaster,” Knight said.

“It [DEFY Thornton]’s an evolution of a trampoline park. We still do have trampolines, but our attractions are based around those,” he said. According to Knight, another key difference is the atmosphere. On the walls inside, there are murals and a graffiti-inspired theme. 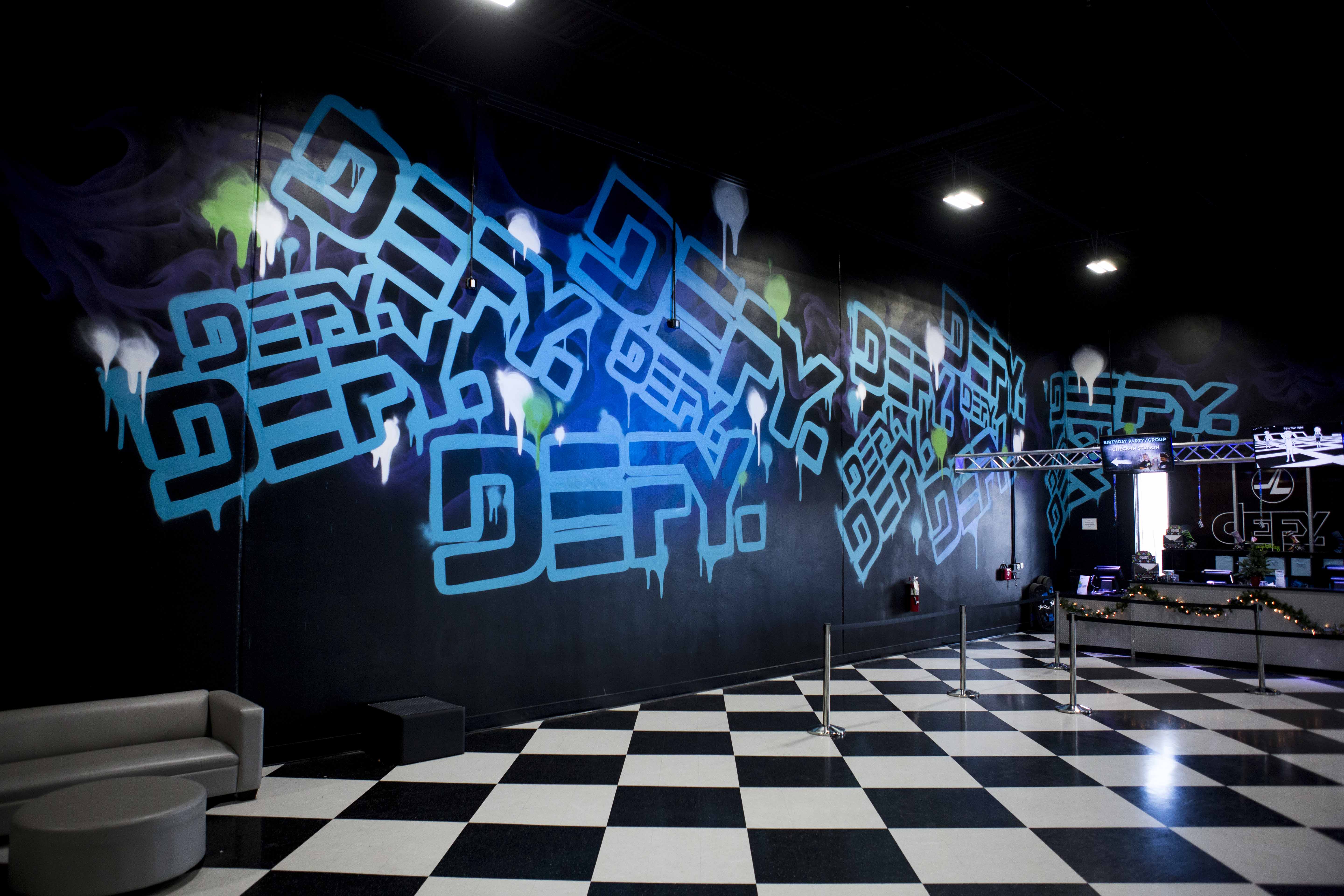 The hype around social media has also attracted some parkour stars and fans of American Ninja Warrior.

“Denver has this little girl named Lylah who is a YouTube star (What Lylah Does). She comes in with her dad and they do YouTube videos. He created a ninja warrior course in his backyard and it got thousands of hits. She’s really young. I think she’s seven. She’s not even old enough to be on the American Ninja Warrior Junior show yet,” Knight said.

These stunts can get pretty wild, but Knight reassures us that the trampoline park is always enforcing safety precautions. All DEFY Thornton jumpers must wear special grip socks with rubber gripping that they can purchase and keep. This is to avoid foul odors and to ensure that nobody takes a serious fall in slippery socks.

“The last thing we want is for people to smell of a terrible foot smell,” Knight said.

In addition to the socks, DEFY also enforces a number of rules designed to prevent injury including no running, no diving headfirst, no running backflips and no double bouncing on the same trampoline.

“You would think that trampoline parks would have tons of accidents. But we’ve only had a couple rolled ankles and elbow injuries so far. But risk is inherent in everything,” Knight said. They also have an onsite staff to make sure people aren’t exhibiting dangerous behavior.

“We take precaution to train people to identify when people are jumping beyond their limits. We’re proactive as opposed to reactive. We want to make sure you’re jumping within your own ability,” Knight said. 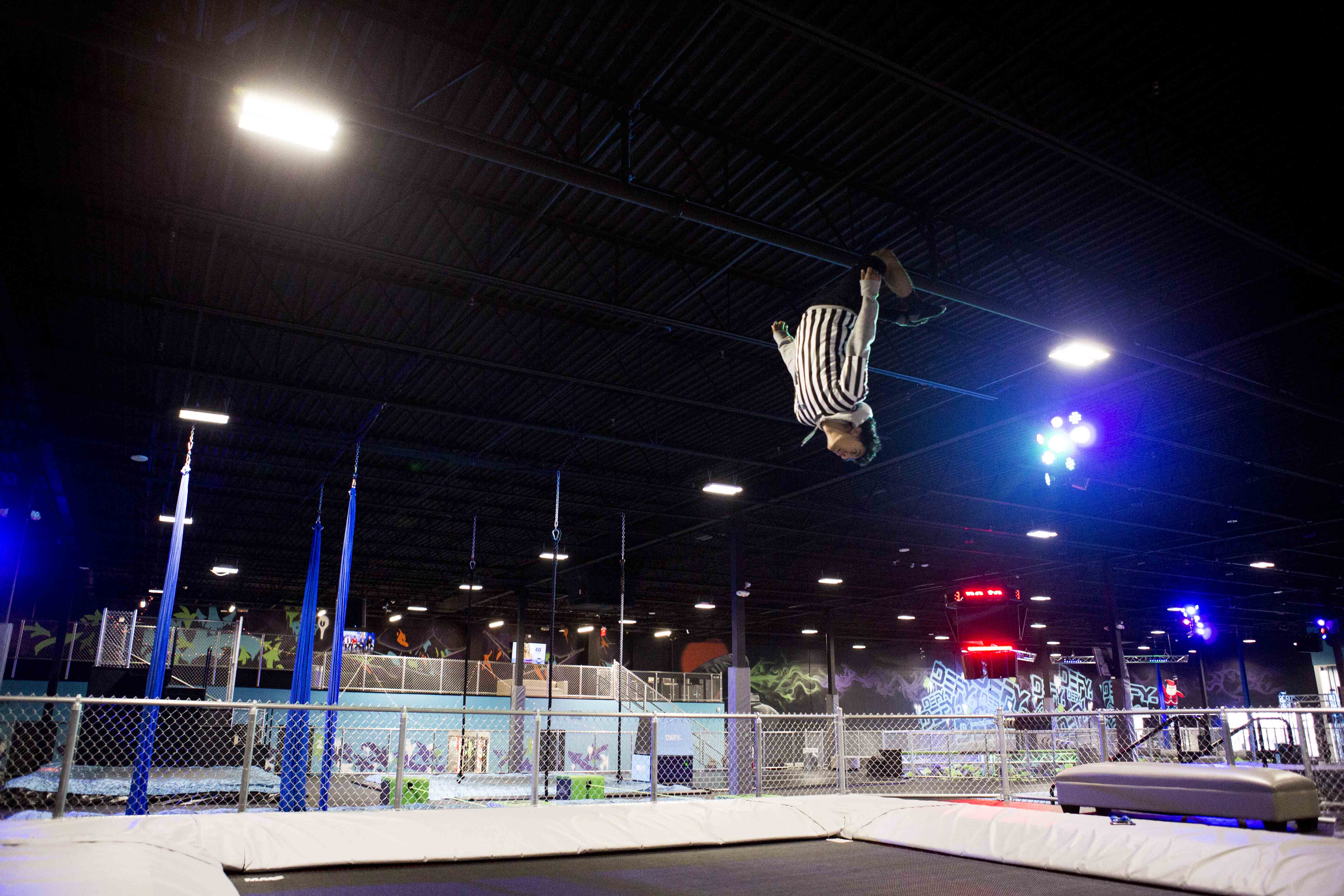 They may not let you go completely crazy at DEFY, but Knight informs us they have other ways of going wild. Apparently, DEFY locations sometimes host slumber parties inside the trampoline park that let people jump all night in their pajamas if they please. You can rent out the whole arena for a private party or participate in a public “lock-in.”

“We have a DJ come out and keep the people going all night and order pizza and drinks. $35 gets you a ticket to come jump the whole night. We give away prizes like an Xbox and a GoPro and have contests to see who can last the longest on the wipeout machine or who can do the most flips in a row,” Knight said.

“It’s not your average trampoline park.” 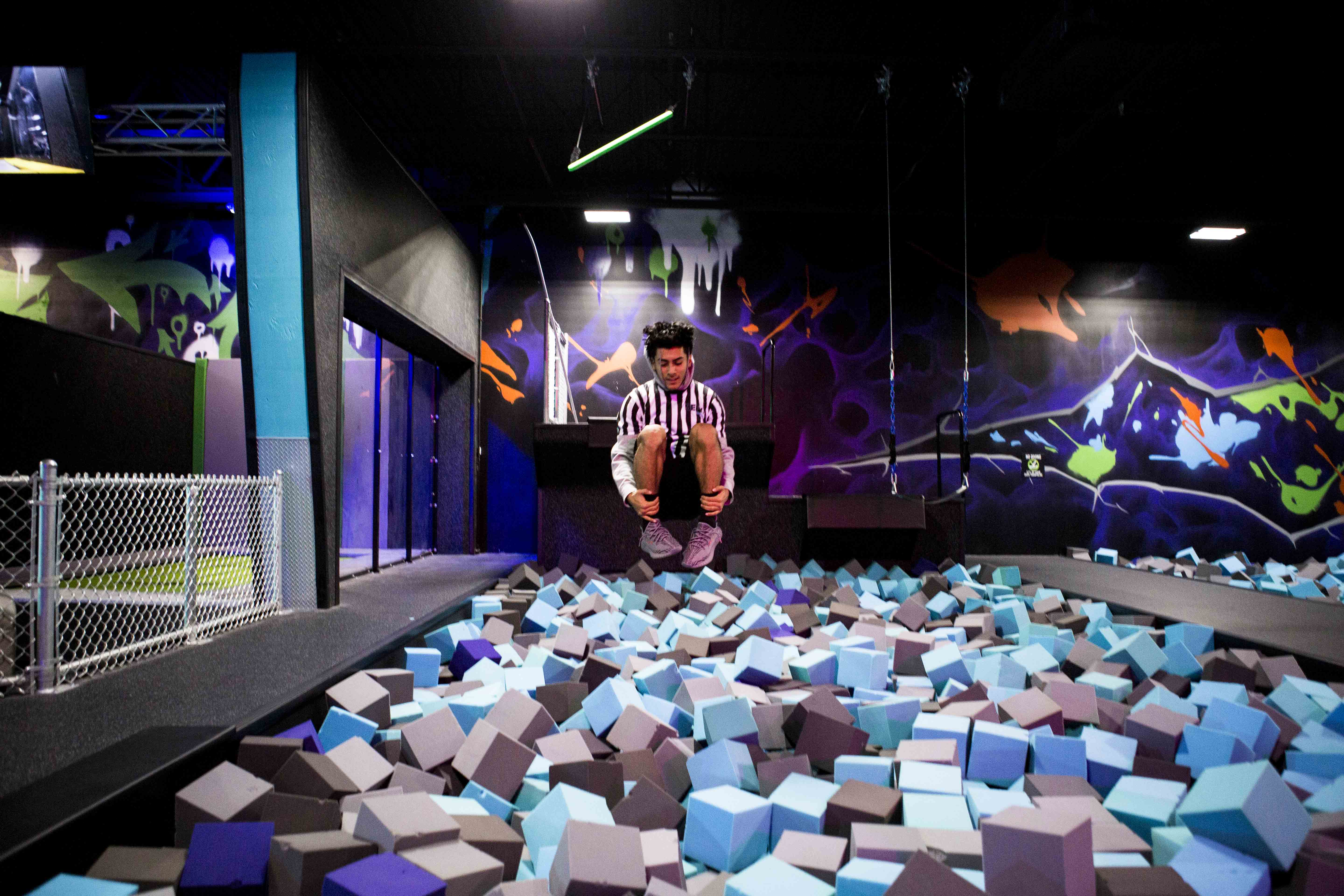