Denver may owe some of its cultural significance to one of the men who defined the legendary Beat Generation — Neal Cassady — and his friend and cohort, writer Jack Kerouac. Cassady grew up in Denver, at 2558 Champa Street, not far from what was then the Puritan Pie Company. After leaving the city, hitchhiking around the country and ending up in a detention center in Canon City, Cassady returned to Denver in 1945 and began the part of his life that is documented in various other Beat writers’ novels and essays.

He served as a magnet for the other Beat Generation legends, pulling them across the country to wherever he happened to be. And when that was Denver he showed them to his favorite haunts — like My Brother’s Bar and the Rossonian to name a few that are still around. Kerouac was a frequent visitor and his time in Denver serve as pivotal points in his 1957 novel, On the Road — a book that has sold four million copies and been translated into 25 languages.

Since then, Denver has maintained a tender place in the hearts of lovers and followers of the Beats. There are documentaries, books, tours that guide you through the different locales Cassady and Kerouac spent time in and events that celebrate the iconic anti-heroes. And now, one group is hoping to build a monument to the dynamic duo that commemorates their experiences in Denver and how those experiences shaped pop-culture.

A rendering of the statue, courtesy of Mark Bliesener

“This will be a long-overdue acknowledgment,” said Mark Bliesener, director of Denver’s annual Neal Cassady Birthday Bash and supporter of the monument. “Neal Cassady is the most important pop-culture figure to come out of Colorado. Neal’s impact on American literature, as both writer and muse, has had a lasting impact on popular culture and continues to influence and inspire new generations today.”

Bliesener and another fan of the Beats, John B. Lane, are spearheading a campaign to commission a bronze sculpture of the two men to give to the city of Denver as a gift. In order to do that, they have asked Colorado bronze sculptor Sutton Betti to collaborate. But, they are asking for the support of other Beat Generation fans, needing $2,500 to cover the cost of a 21-inch scale model that will be used to secure additional funding for the life-sized version.

“I can see the monument becoming an important landmark in the City of Denver,” Lane commented. “Sutton has designed the monument to encourage people to interact and take photos with it.” Based on a photo of Cassady and Kerouac, where the two men are standing with their arms around the other casually, the statue will measure at just under eight feet tall. Engravings on the side will give a brief description of each man. 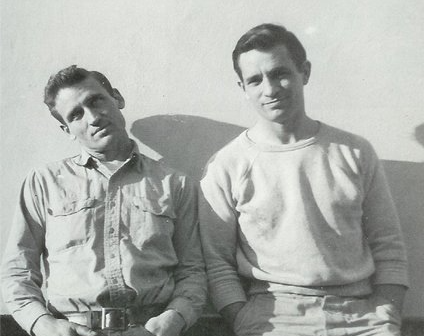 “I look forward to creating Jack and Neal’s likeness in clay and finally bronze. I have been a fan of the beats for many years,” Betti said. “To have this opportunity of creating a permanent monument honoring two pioneers of American literature and counterculture means the world to me.”

The fundraising campaign lasts until April 9 and can be found here.