The seventh annual WinterWonderGrass in Steamboat kicked off on Friday under stormy skies to the tune of great people, even better beer and the best music. That trifecta is exactly what founder Scotty Stoughton strives for when curating his festivals. He aspires to create a sense of community, procure quality drinks and curate incredible musical lineups. Though they’re slated as music festivals, the WinterWonderGrass’s — located in Vermont’s Stratton Mountain, North Lake Tahoe and Steamboat, Colorado —  are much more than just that. Between the number of charitable causes that a sum of ticket sales go to and the fiercely loyal dedication to partnering with local businesses like Oskar Blues Brewery, Stoughton’s WinterWonderGrasses can be defined as community festivals more than anything else. They’re for the people, by the people, and for three weekends a year at three vastly different locations across the country, everybody wins. 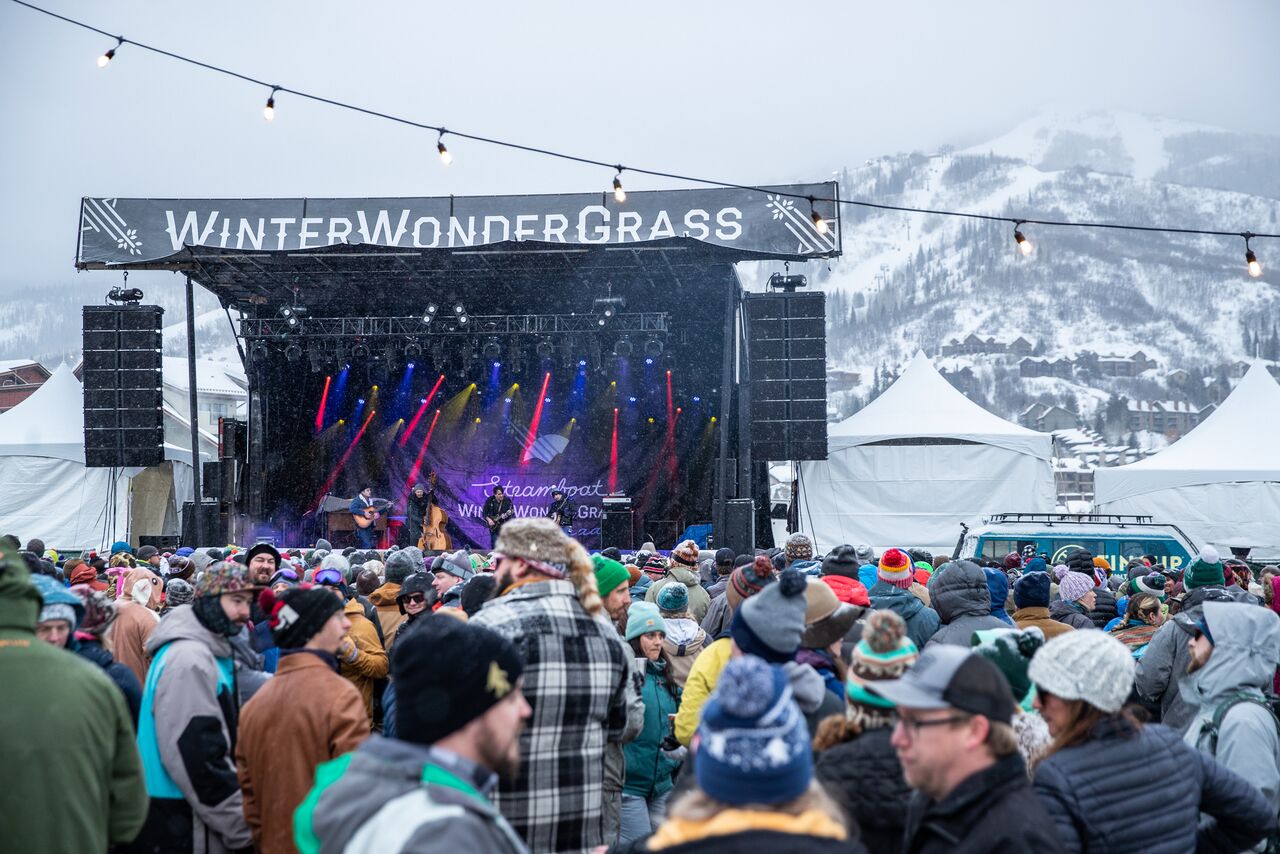 What brings the people out of their winter hibernations to brace the bitter cold is first and foremost the music, the first few sets of which began in the afternoon with the Jay Roemer Band, the Sweet Lillies, and Lonesome Days in the three adjacent tents — Jamboree, Pickin’ Perch and The Soapbox. The boys of Tenth Mountain Division sat in for a tune with the Sweet Lillies before notorious WinterWonderGrasser Lindsay Lou heated things up on the main stage. The late afternoon saw Jeff Austin’s wizardry on the mandolin accompanying tunes like “Ten,” “Raleigh and Spencer” and “Steep Grade, Sharp Curves.” Fruition took their place just after sundown with a quick nod to the dedicated WinerWonderGrass fans from Jay Cobb Anderson — “I can’t feel my fingers, but can I feel this crowd.” The Portland rock ‘n’ grassers debuted two new songs, along with busting out the especially sought-after “Labor of Love.” Love Canon, Rapidgrass and Pixie and the Partygrass Boys raged the three tent stages before the evening’s headlining performance.

Friday night’s headliner was the incendiary Railroad Earth, whose ten-song set hit every chord imaginable. The set included the now five official members of the band, along with guest sit-ins from keyboardist Bill McKay and former Elephant Revival member Charlie Rose. Erik Yates very gracefully filled in for the late Andy Goessling, playing the flute on “The Hunting Song” and “Like A Buddha.” The Americana-folk masters played a terrific set that included the entire crowd singing along to “Bird In A House,” tossing their playing cards to “Elko,” and dancing amongst the falling snow to “Storms.” And though Railroad Earth closed out the main stage festivities, festival-goers had a handful of choices for late-night shenanigans, like taking the gondola to Thunderhead Lodge to catch The California Honeydrops perform funky covers like “How Sweet It Is (To Be Loved By You)” and originals like “When It Was Wrong.” 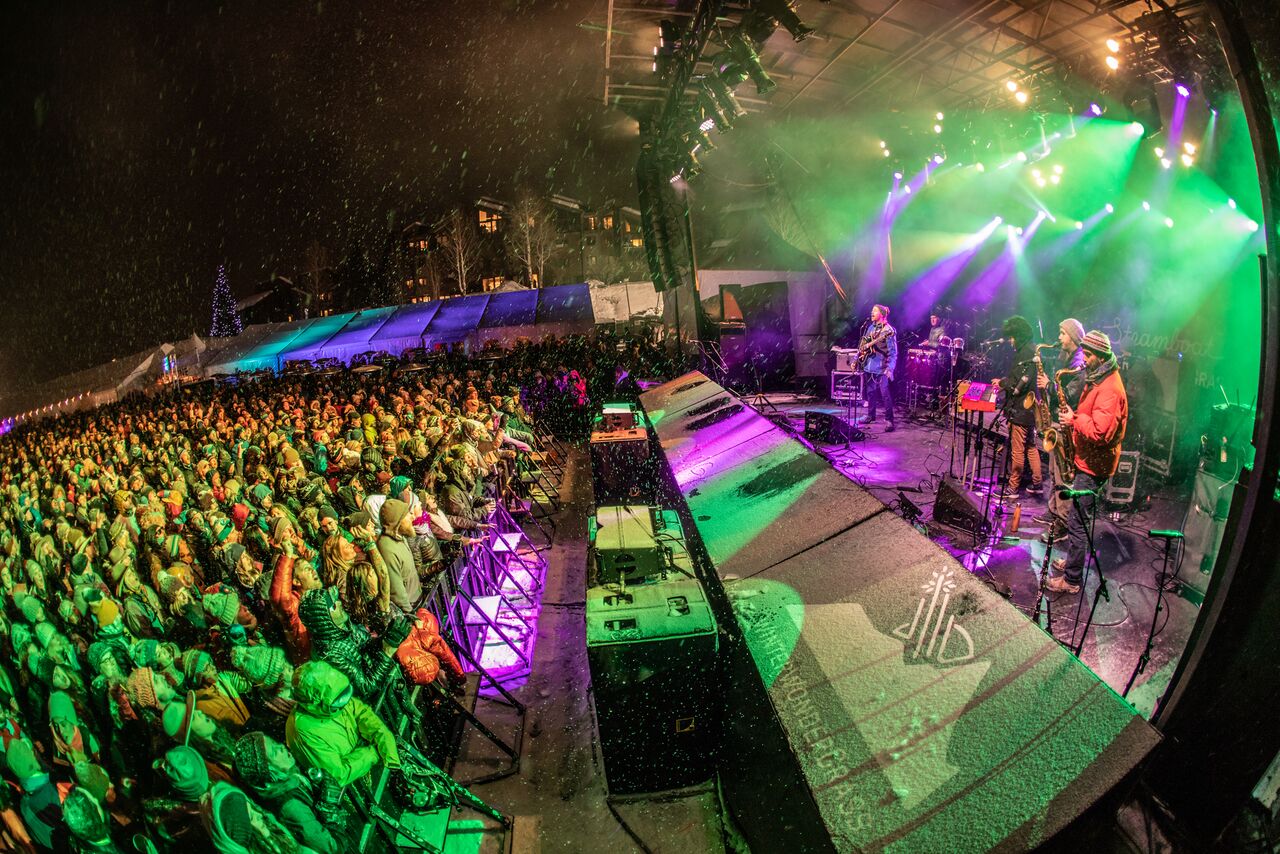 Day two saw some unexpected snowfall just as things kicked off with River Whyless and Montana’s Lil Smokies on the main stage. Upstate, Wood Belly, Town Mountain and Chain Station kept things warm in the music tents, but the highlights of these tent sets were the two from the “WinterWonderWomen.” The two short but oh, so sweet sets had enough girl power to fuel the entire festival and included but were not limited to Fruition’s Mimi Naja, the Shook Twins and fiddle-playing goddess Bridget Law. The California Honeydrops threw an epic dance party on Saturday evening with jams like “Brokedown” and “Having A Party” before Trampled by Turtles graced the main stage for ironically the first time in WinterWonderGrass Steamboat history. Considering member Dave Carroll is a Steamboat local, this made for an extra special hometown show where fans were treated to several highlights from the high-energy and fast-paced bluegrass band — from originals like “Codeine” and “Wait So Long” to an awesome rendition of Faces’ “Ooh La La.”

The night was still buzzing long after the festival had closed up shop, and one of a handful of late-night happenings was the Jeff Austin Band at Schmiggity’s, where lucky folks caught “Rag Doll,” “Snow On The Pines” and “No Expectations.” Saturday night ran into Sunday, which finally saw sunny skies and a vibrant, all-female set on the main stage from Della Mae featuring the radiant Bonnie Paine and a brief appearance from Mimi Naja. The effervescent Shook Twins came next, dressed to the nines and performing songs of their own, like “Safe” and “Window,” along with a cover of “Mad World.” Meanwhile in the Pickin’ Perch tent was another set from “WinterWonderWomen,” and adjacent in the Jamboree tent was Pickin’ On The Dead, which ran through bluegrass renditions of the Grateful Dead catalog and included “Bertha,” “Althea” and “Big Railroad Blues.” 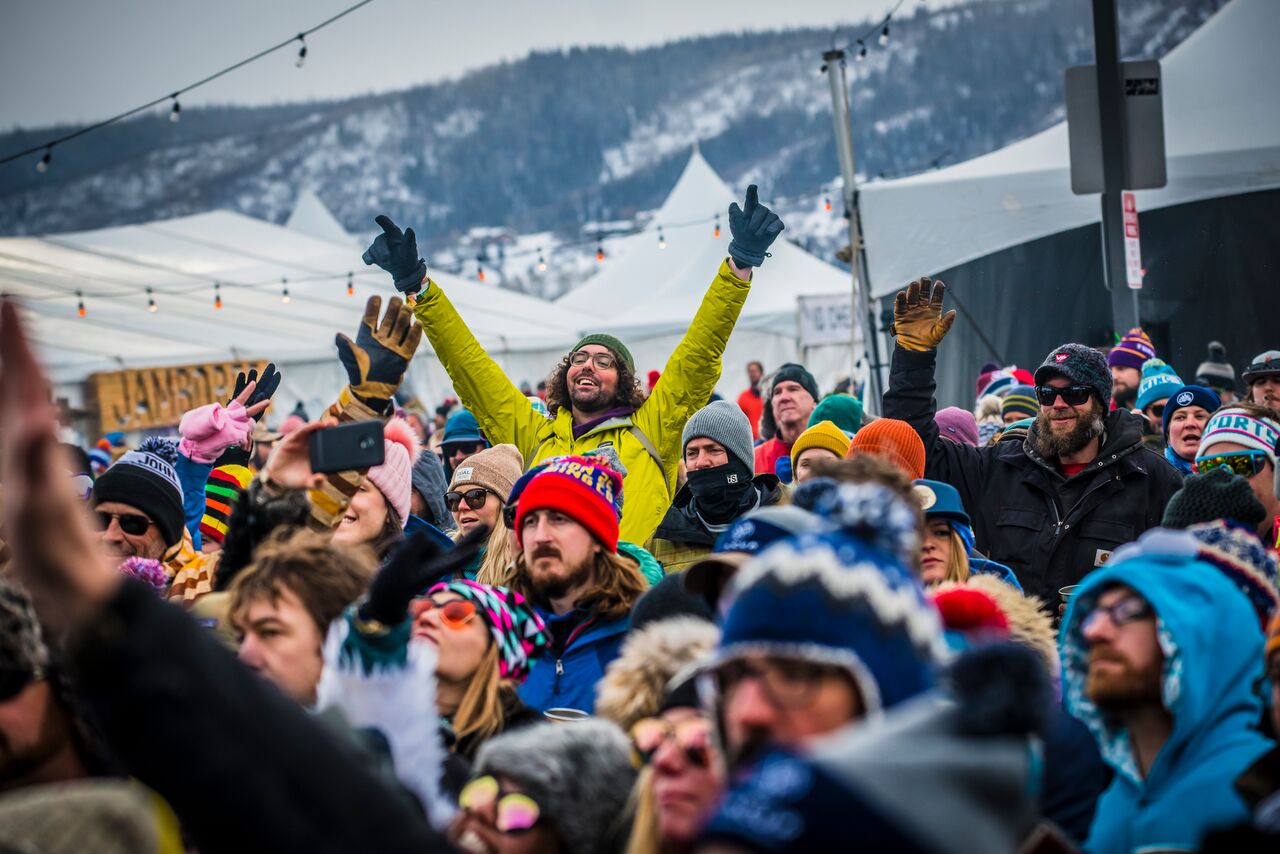 The sun set as Billy Strings took the stage for “Meet Me At The Creek” and gave a gloriously raucous performance, proving why he’s the biggest up-and-comer in the genre and is the band to look out for. And it’s no lie when they say the best is yet to come, with the Infamous Stringdusters delivering the last and quite possibly the most epic set of the weekend. The Grammy-winning six-some was as tight as ever on Sunday night, running through covers, originals and setting the place on fire despite the freezing temperature. The Infamous Stringdusters performed fan favorites “Colorado,” “Fork” and “Get It While You Can,” their well-known cover of “Walking On The Moon,” a rendition of Phish’s “Possum” and an encore of the Grateful Dead’s “Scarlet Begonias.”

All in all, the seventh annual WinterWonderGrass Steamboat was a terrific success, bringing founder Stoughton’s vision of bringing “great music to great people in great communities” to life. The festival is the “quintessential Colorado experience,” from its aggressive sustainability campaign, nonprofit benefactors, promotion of local businesses and cultivation of visionary musicians who want to be part of the bigger community. The WinterWonderGrass triplets, in the words of Jeff Austin, contain an “infectious love and energy” that is unique to these festivals, and particularly to Colorado with its “big ears” for music. And as Austin mentioned sometime during the hustle of this past weekend between beer tastings, dance parties and mixing and mingling, there’s enough room for everyone, so “keep spreading the good, and let’s f*cking rock.”