New Belgium Is Firing on All Cylinders at the Source Hotel

When you walk in the front door at The Source Hotel and Market Mall you are greeted warmly by the front desk and you can’t help but notice the two tap handles. Guests who stay at the hotel get a free pour of whatever special small batch beer might be on tap courtesy of the now operational the in-house New Belgium brew system. For our visit, we got to enjoy a mix-cultured sour that was tart, a bit crisp and layered in flavor. It’s the type of flavor profile we come to expect from New Belgium Brewing.

There are certain breweries synonymous with the state of Colorado and New Belgium is one of them. It’s an institution in Fort Collins and for a large part of the population, their introduction into craft beer comes in the form New Belgium’s flagship beer, Fat Tire. For its entry into the Denver market, it would seem highly unusual to open a small 10-barrel experimental brewery in a hotel lobby in the heart of one of the densest beer neighborhoods in the city and yet it makes sense.

This 10-barrel system producing beers exclusive to The Source is allowing New Belgium to connect with the beer drinkers and even non-beer drinkers on a personal level while allowing the brewers to experiment in ways not otherwise possible. When we say people can connect to the brewery we mean it, the brewery is only separated by a glass wall from the check-in desk and the same goes for the people who walk by on Brighton Boulevard. The brewery also has glass garage doors that can be opened whenever its warm enough. Brewer Geoff Wenzel joked that it might be fun to ask the people who walk by what they would like to see in the next beer, within reason of course. Wenzel, by the way, has full creative control on the brews. 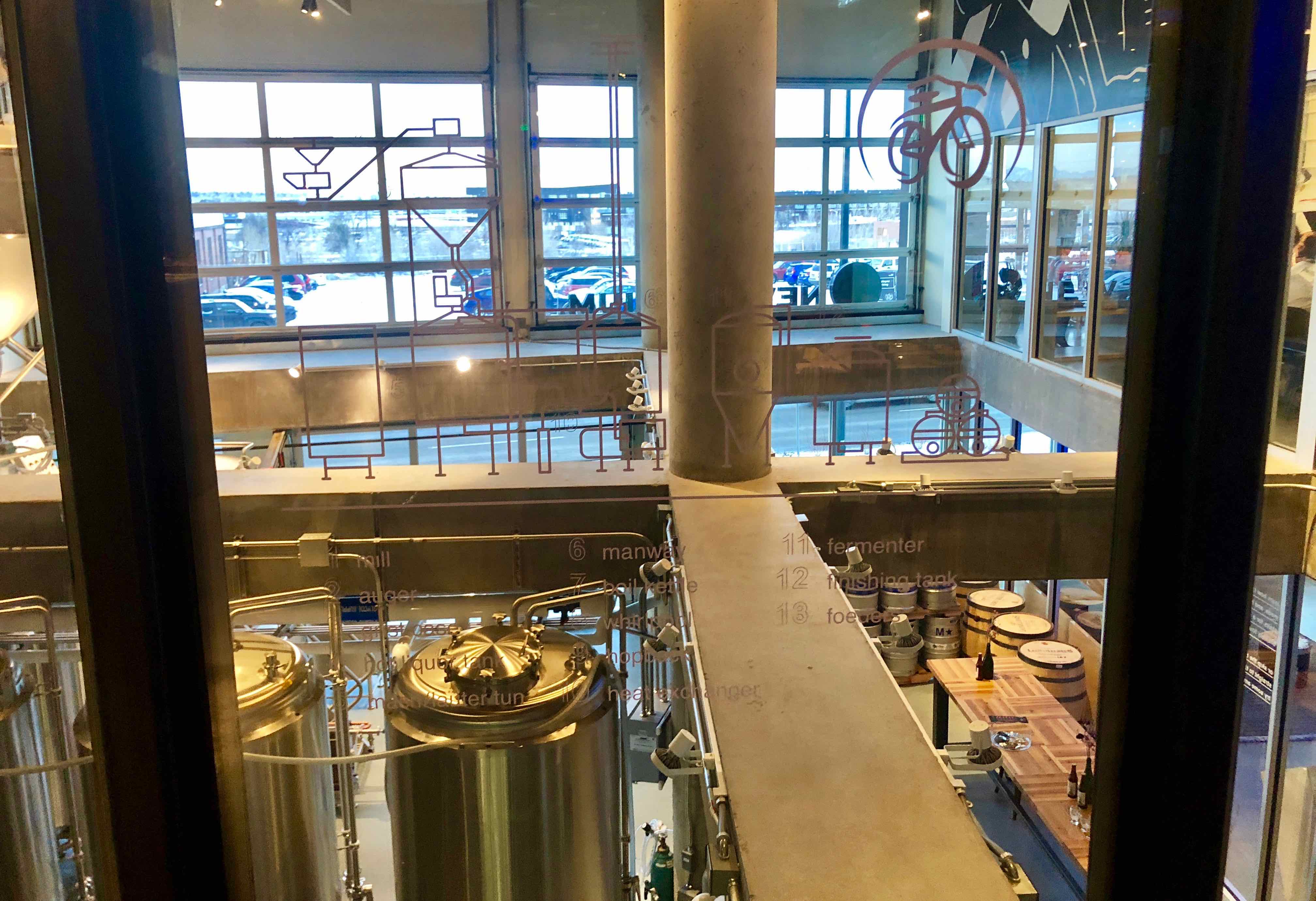 If you are a beer geek or just curious about the process, you can watch the New Belgium crew at work from ground level or make your way up to the market to get a bird’s eye view of the process. It’s like the brewers are in a beer fishbowl, an experience otherwise nearly impossible at a larger brewing facility.

It’s not just the interaction with the people who drink the beer that makes this set up work. It is also about the surrounding community. We aren’t talking about the beer community in this case, although you could, if you had a strong enough arm, literally throw a rock and hit Great Divide’s Barrel Room. We are talking about the Market Hall which is a collection of artisans who specialize in food and retail both within the hotel complex and the original location just a short walk away.

Everywhere we went to New Belgium had left its mark and more importantly for the beer drinker in us, we experience something special. The newly opened Reunion Bread Company has on hand a bread that eats like a dessert made with another stalwart of New Belgium, 1554. It is, if you are feeling gluttonous, the best kind of way to carb load. At Smok, a modern barbeque restaurant, one of the dry hopped sour beers from the brewhouse was incorporated into a beer slushie. We won’t reveal what else might have been in that slushie but will tell you it went wonderfully with the food. And if you aren’t careful you’ll need to get yourself a room at the hotel conveniently located in the same building.

At Safta, a restaurant focusing on the culinary styles of Israel we sipped on La Folie, the original Colorado sour beer. Don’t get us wrong, La Folie, no matter when you drink it is an experience worth having but it wasn’t what got us excited. It was hearing about the bold spices and flavors being bantered about from chef to brewer. On the horizon, a turmeric-ginger IPA, if that’s the beginning we can’t wait to see what kind of collaborations there are on the horizon.

Our last stop of the night was at The Woods at The Source Hotel. This rooftop restaurant has one of the best-unimpeded views of Denver and it’s in all directions. Getting off the elevators you are greeted by New Belgium barrels – an homage to the original Woods in Fort Collins. From there you can eat inside or out enjoying special onsite beers or enjoy cocktails infused with New Belgium beers. On this cozy night, it was the fireplace that called us over for warmth while we sipped on Rockin’ A Gold Tooth, a dry-hopped cream ale. The beer was fruity, crisp and had a dry finish that lured you back in for the next sip.

New Belgium at The Source Hotel allowed this brewery to go big by going small. New flavors, new experiments and new partnerships all pushing the boundaries of creativity and how beer can be expressed. It’s a new kind of beer experience. It is the beer staycation you didn’t know you needed.

New Belgium Denver is located in The Source Hotel at 3350 Brighton Blvd, Denver.