The String Cheese Incident Already Threw the Best Party of 2019

The String Cheese Incident — a Colorado-based jam band born in 1993 —celebrated their 25th Anniversary this New Years Eve. This local favorite brought three days of festivities to the  1STBANK Center in Broomfield, Colorado on December 28, 29, and 31. Known for their dedication to their fans (family), The String Cheese Incident outfitted the entire arena with band memorabilia, past concert flyers and decorative artwork for a fully immersive experience for attendees.

The 25th Anniversary celebration was the ultimate incident for both aged cheddar and baby swiss enthusiasts alike. Immediately upon entry, cheese heads stepped inside a world of psychedelic mementos. Concert posters ranging from their first performances to recent gigs lined the outer walls of the venue. The bars and concession stands took on the personas of the band members by displaying posters of their names above checkout. Vibrant String Cheese-inspired artwork from tapestry artists, painters and graphic designers covered the hallways for a visual treat between sections. It was easy to get lost in the artwork around the arena, but the real treat (aside from the performance) was the Land’s End lounge. 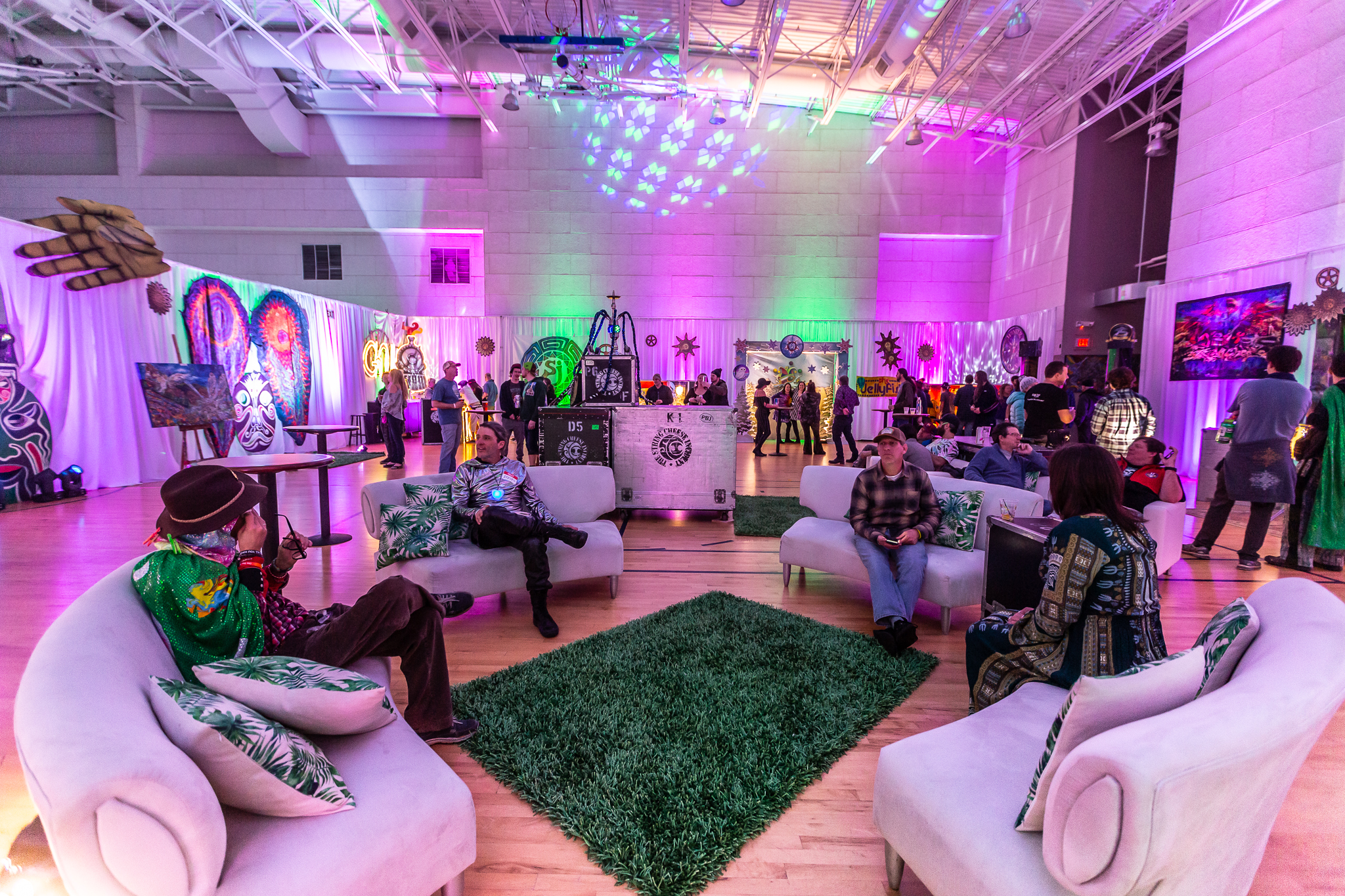 Tucked away in the corner of the venue lied the entrance to a cheese lovers paradise — Land’s End lounge. Enclosed by a rainbow arch entrance that looked like Willy Wonka’s Chocolate Factory meets the technicolor ‘60s, the lounge was a decorative ode to the past 25 years of The String Cheese Incident. Comfy white couches and faux grass rugs lined the path around Land’s End, allowing fans to sit back and watch old clips from some of the first incidents displayed on the wall. Colorful tapestries of jellyfish, mountain ranges and String Cheese emblems draped across the walls in-between trippy graphic renderings from Horning’s Hideout and various events. Tiki-style masks, ‘60s carnival entrance hands and bursts of ornamental art installations filled the room for a hypnotic experience. Between the flashes of multi-colored lights, fans jumped in front of the photo-op backdrops that featured String Cheese Incident illustrations and real bongos for a snapshot that will last a lifetime. With the endless amount of memorabilia, good vibes and generous bartenders at Land’s End, it was easy to get lost in the lounge before the event. Luckily, fans ran in and announced when the band was about to start so the loungers could make their way to the main event. 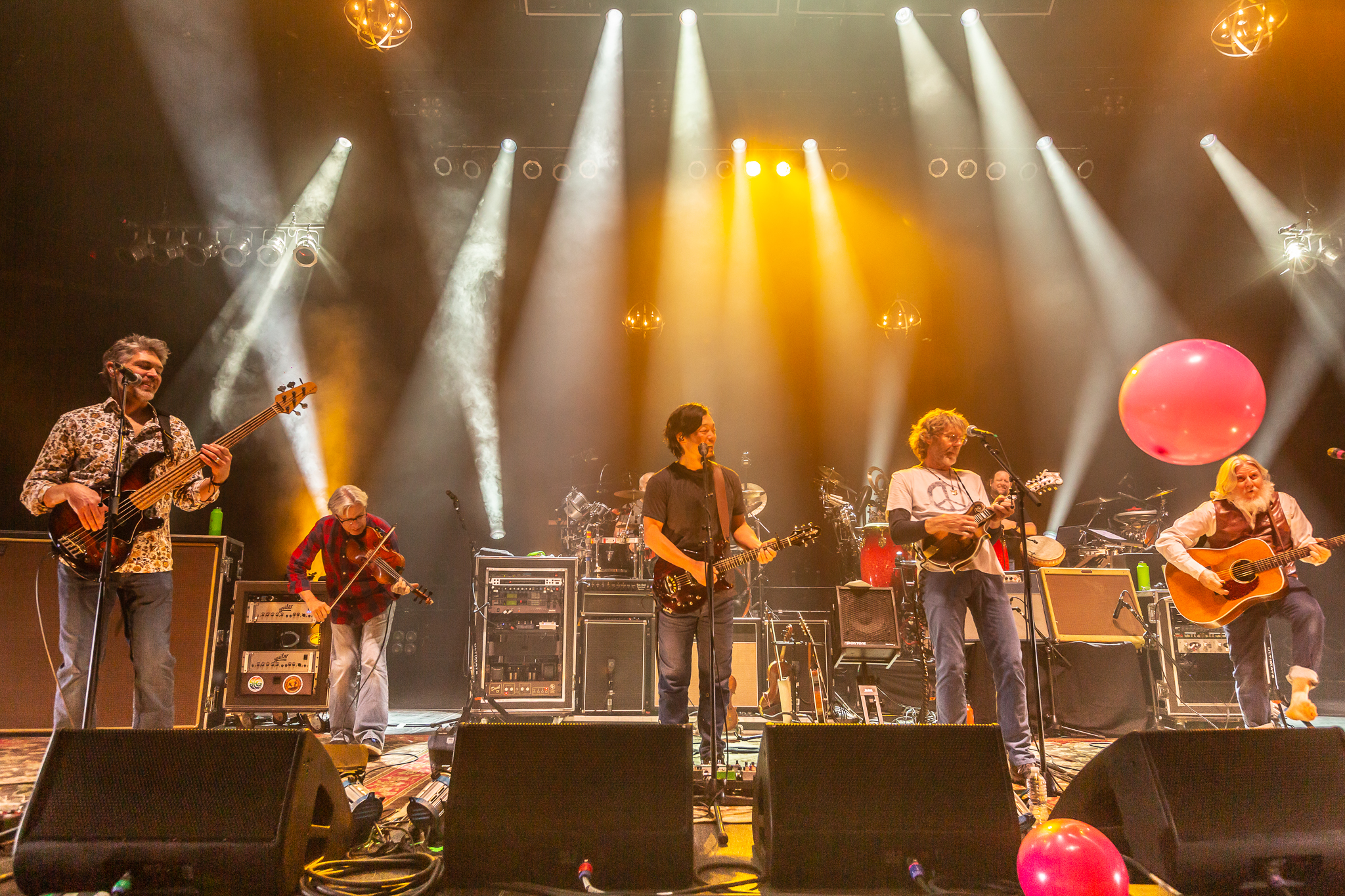 The String Cheese Incident with Sam Bush and Darol Anger

The String Cheese Incident jumped right into action for their three-night run. With no openers for any evening, the band kicked off Friday night with some special guests on stage instead. Friday night’s first set featured Sam Bush and Darol Anger for a bluegrass-focused and very stringy performance. Before ending the first set with “Colorado Bluebird Sky,” String Cheese fans boogied to Stevie Wonder’s “Signed, Sealed, Delivered,” “High on a Mountain Top,” “Take the Money and Run,” among other favorites. The band returned for the second set which featured a mind game for fans — a palindrome setlist that began with “Close Your Eyes” and moved through “Black Clouds,” “Jellyfish,” “Round the Wheel” and “Texas,” before coming to a peak at “Land’s End.” The band then played the same songs in reverse, returning to “Texas,” the “Round the Wheel” and so on. The String Cheese Incident closed out Friday night with “Rivertrance” and “Reach,” leaving fans hungry for night two. 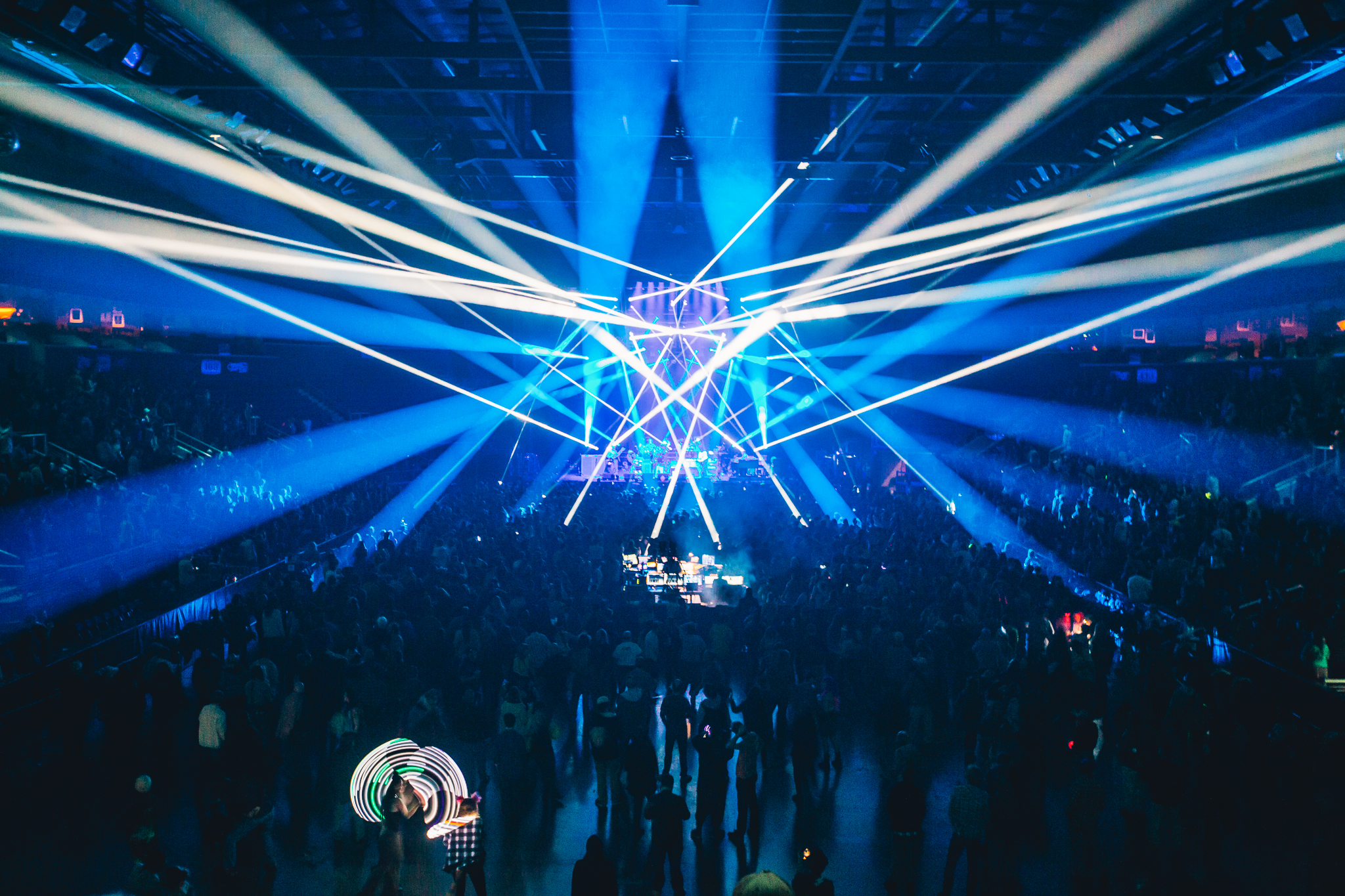 The String Cheese Incident on December 28

The weekend festivities were in full effect by Saturday night. The String Cheese Incident with special guests Robert Randolph and members of Dumpstaphunk (Ivan Neville, Ian Neville and Tony Hall) brought the funk to the 1STBANK Center on December 29. Fans rejoiced when “Miss Brown’s Teahouse,” Jimmy Hendrix’s “Voodoo Child,” “Sweet Spot” and “Restless Wind” among other classics played throughout the venue. String Cheese briefly teased Supertramp’s “Breakfast in America” between their originals for a crowd-pleasing cover. The encore featured “Red Hot Mama” which brought the arena to their feet for one last get-down before taking Sunday night off.

After a much-needed Sunday rest night, The String Cheese Incident and fans returned on New Year’s Eve for the final 2018 show. Fans knew Monday night was going to be a special event when 1STBANK Center employees began handing out electronic wristbands at the door. While the wristbands lied dormant, the String Cheese family could sense something was going to happen at midnight. The arena had new additions as well, massive white balloons lined the ceiling while classic New Year’s Eve nets of balloons hid in the crevices. 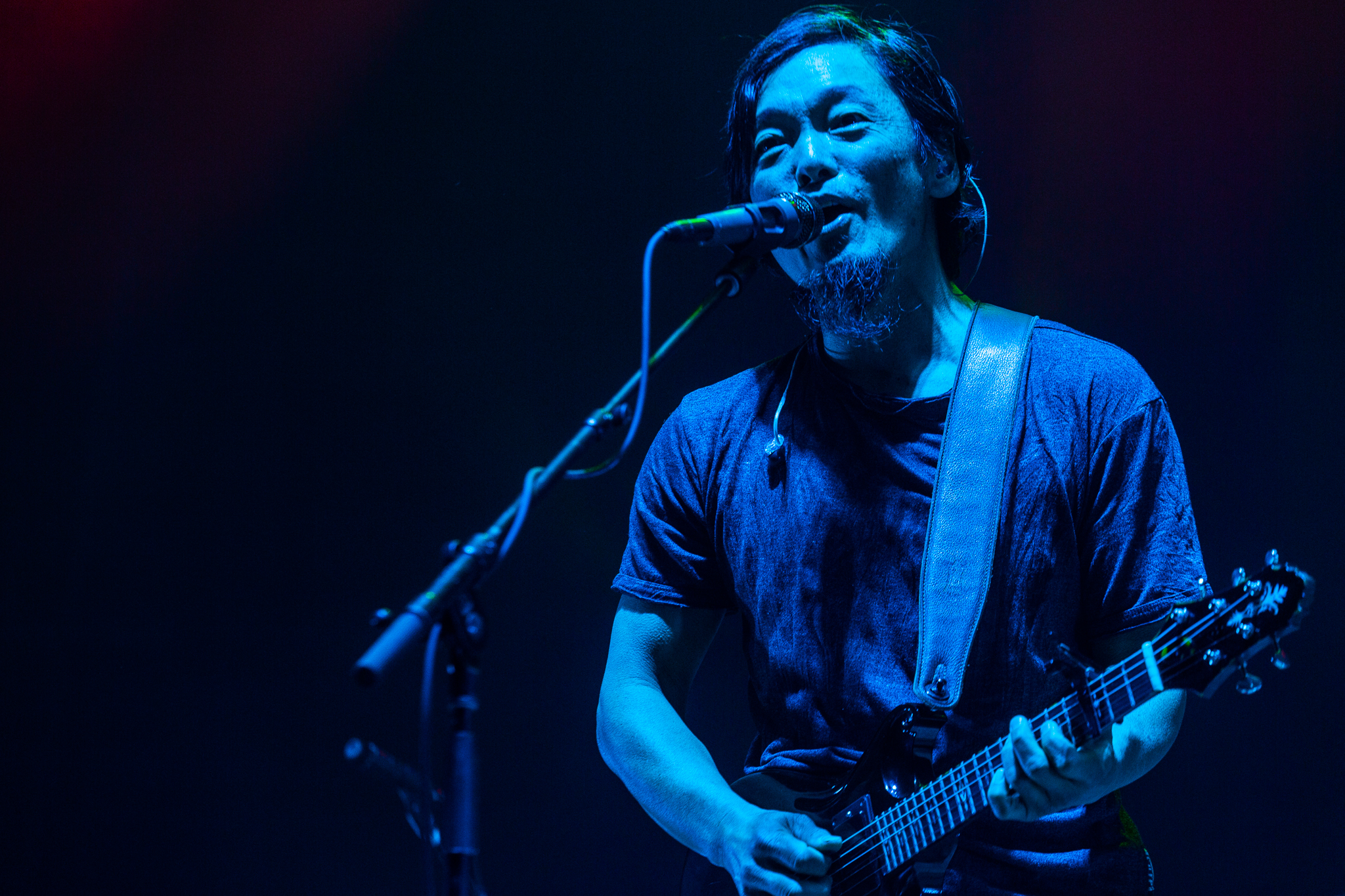 With three scheduled sets, the anticipation continued to grow during each break. The opening song kicked off the celebration with fan favorite “Outside Inside.” The entire arena radiated with joy as the first set included other beloved selections “My One & Only” and “Joyful Sound.”  The String Cheese Incident held nothing back for the second set, playing the classics “Let’s Go Outside,” “Sirens,” and “Rosie” between other selections. The band took one last break before the third and final set midnight. The String Cheese family could hardly wait for the final return. Around 15 minutes before midnight, the band returned to the redesigned stage for the crescendo of the weekend and 2018. While the band began with “Colliding” the arena began to light up with incredible installations. Drone-controlled dolphins flew into the venue while giant balloon octopuses shimmied into the crown. The large white balloons began illuminating different colors while our wristbands synced in unison to the light show throughout the venue. The entire venue was in complete awe as more and more mind-blowing elements surrounded the countdown. 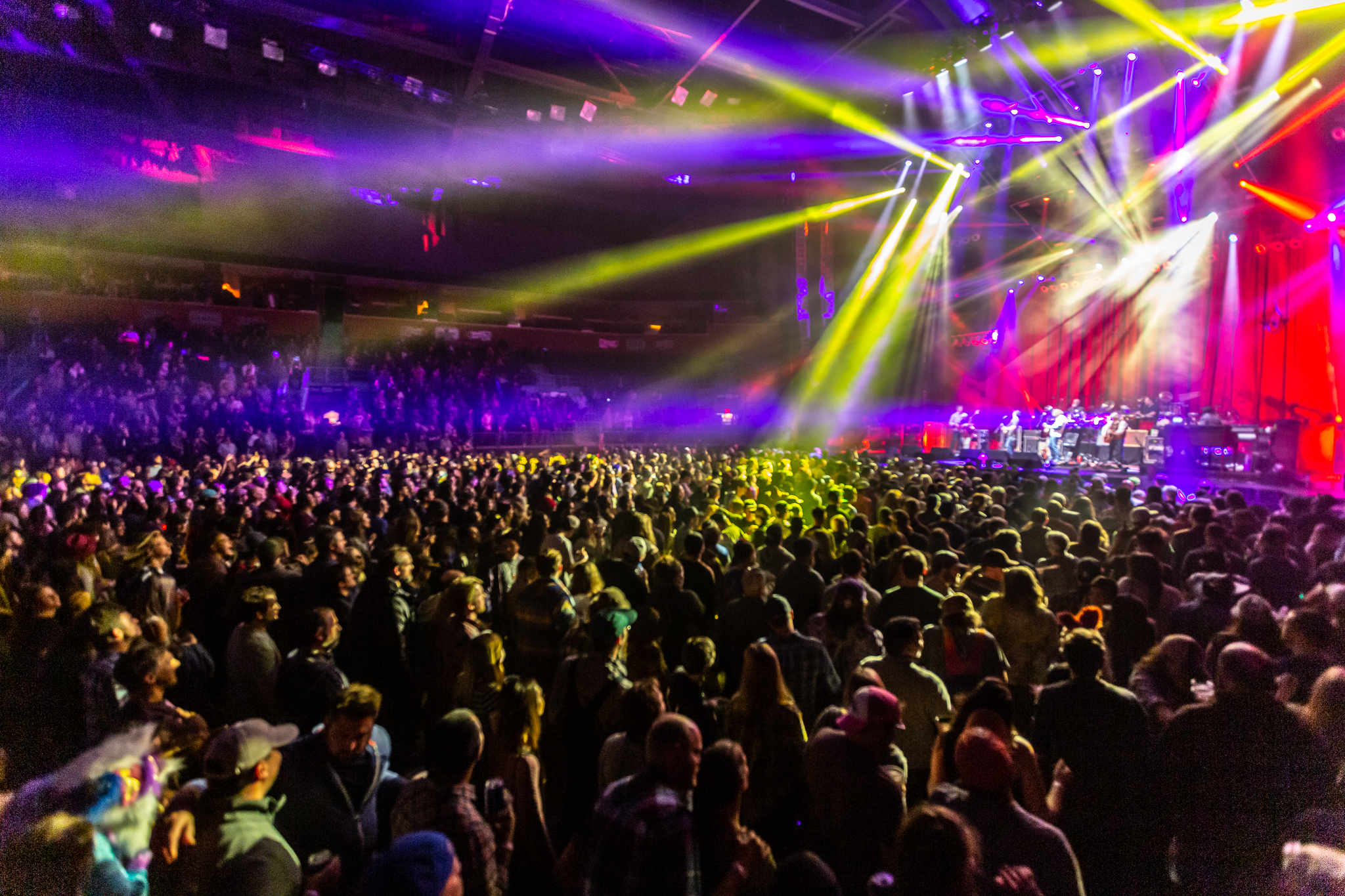 The String Cheese Incident on December 28

In true cheese fashion, we missed the mark at midnight, but shortly after the event came to a climax when the hundreds of balloons dropped, confetti shot out from every corner, the giant LED balloons dropped down, an acrobatic performer released from the ceiling and the aquatic decorations flew around the room. It was the ultimate New Year’s Eve celebration — each fan was completely surrounded by the festivities. Ending the night and 2018 with “Good Times Around the Bend,” The String Cheese Incident kicked off 2019 and their 25th Anniversary with the ultimate celebration, giving fans a once-in-a-lifetime experience they will never forget.