Review – Wood Brothers Proved What Denver Means to Them

Denby GardinerDecember 7, 2018Music
All photography by Kenneth Coles
Home
303 Magazine
3 min read
Coming in hot on a cold day, the Wood Brothers brought their new album One Drop of Truth to the Ogden on Thursday night. While the outside of the Colfax venue was gray and chilly as the patrons waited in a line nearly wrapped around Angelo’s CD’s and More next door, the inside was cozy welcoming for the night at hand. The Wood Brothers, who are now officially a Nashville-based band, consists of two actual brothers — guitarist Oliver and bassist Chris, as well as drummer Jano Rix. The brothers grew up in nearby Boulder, which planted the seed of Americana roots music in them before they took their talents to Atlanta and New York City.
The night opened with Amy Helm, who is the daughter of singer Libby Titus The Band’s Levon Helm. She graced the stage with her own recent release, September’s This Too Shall Light, and the anxious crowd had nearly filled the venue by the end of her set around 9 p.m. While the Ogden remains one of Denver’s most cherished spots for catching live music, when the lineup is stacked with talent, an equally great view of the stage to the sound can be a challenge to find. 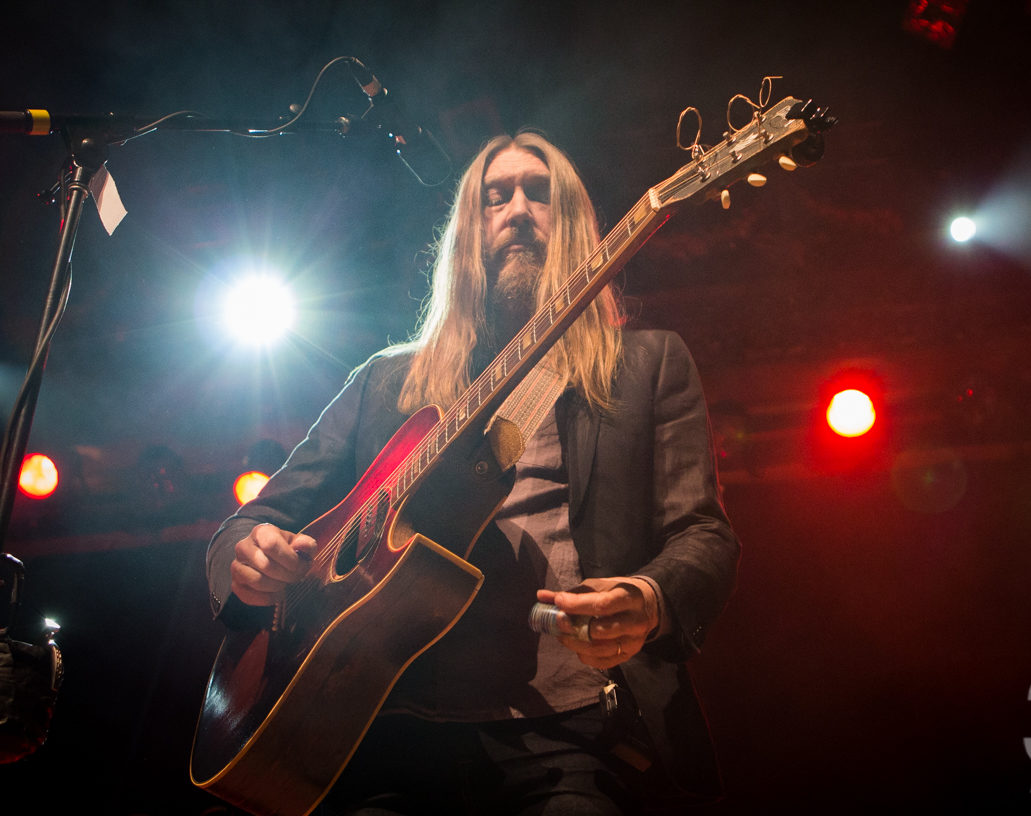 The Wood Brothers took their places and dove right in, kicking off their signature bluesy-rock sound. They took it straight to one of the larger hits, “Luckiest Man,” right off the bat with the second track of the setlist, and the song served as a sing-along for the crowd. Rix, behind a full drum setup, has made quite the evolution in the band over the last couple of years, contributing a heart pulse addition to the guitar and bass of the other members. Not only that, but he also hopped on the harmonica for multiple tracks, including “If the Spirit Moves You,” which proved an impressive feat.
Oliver Wood’s hair gushed over his shoulders like a golden waterfall, a familiar sight to go along with the peppy, familiar sound of “Keep Me Around,” that again inspired the audience to sing in participation. “On the bass over there, that’s my little brother Chris,” he said to his fans as if this were new information. “Oh, and on the guitar, that’s my big brother Oliver,” followed Chris to the sounds of laughter. “I know it’s only Thursday, but dang it feels good!” Oliver chimed in before resuming the performance.
As they bopped into their dancier numbers, Chris showed off his signature moves of swinging his long, gangly legs around his stand-up bass. As much positive reception as that received, it would not be a true bluegrass show without the gathering around a vintage microphone to play a few tracks as an ode to the nostalgic ways of folk’s music past. “We’re going to have a Wood Brother Where Art Thou moment,” described Oliver before belting “Sing About It” and crowd favorite, “One More Day.”
“[I’m] pretty sure Denver is in the top three, maybe top one places for us to come play,” said Chris to a proud audience. “We don’t say that to every city. This is a special place for music and you know it.”
The group brought it back to their dispersed positions but Rix stayed up front for a while longer to jam what the group has affectionately deemed the Shuitar. With their extensive showcase of instruments on stage, the performance more than likely could have gone on forever, but alas, the Ogden show had to conclude. However, the yearly commitment to their happy, dancing Denver fans proves that Colorado will always be on their tour stops, and that is enough until next time.