Review – United States of Bass Worked Up a Sweat

Red Bull knows how to throw one hell of a party.

Two stages, 12 different DJ acts, dazzling LED lights and a custom Funktion One sound system aren’t exactly required to make an unforgettable night, but it doesn’t hurt to have all that on hand either. All the elements for a great time were provided in spades on Thursday, December 13, in a complete takeover of Cervantes’ Masterpiece Ballroom and The Other Side.

Red Bull Music Presents: United States of Bass showcased an impressive array of talented DJs from all around North America. A myriad of club, juke and ghetto house — all various types of dance music that fall under the umbrella term “bass” — the night offered so much talent it felt impossible to decide which of the two rooms to stay in. 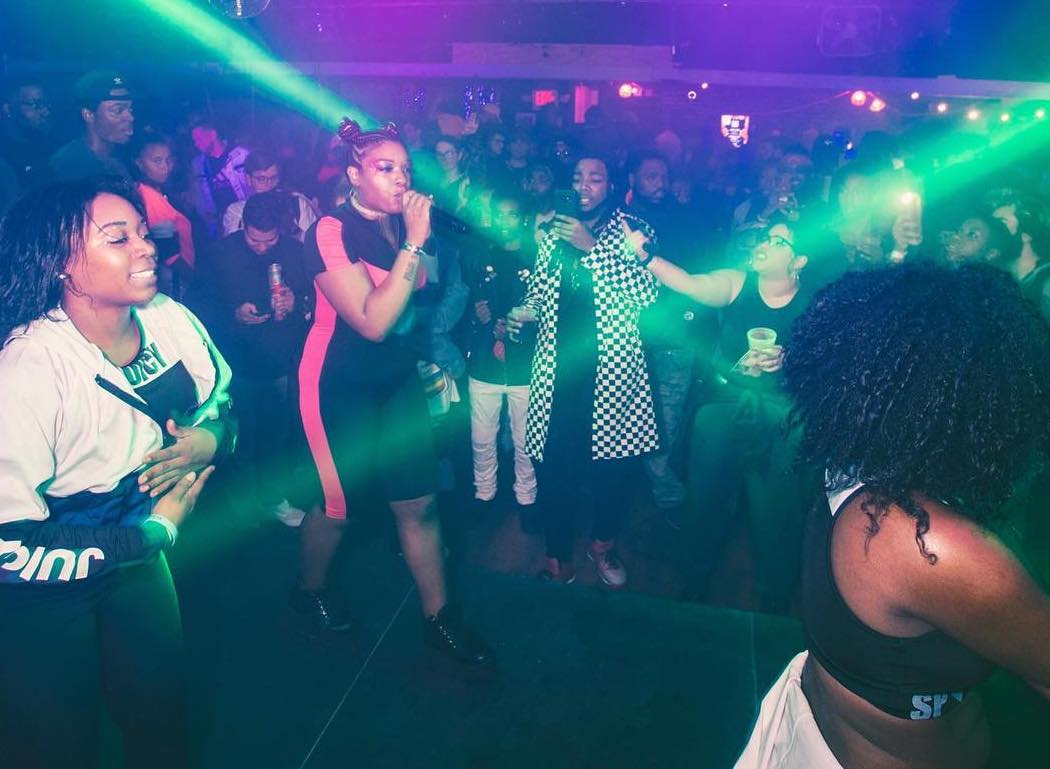 Just like the night varied in sound from room to room, club music varies in sound from city to city. “Jersey, we’re all about the vocal chops,” the Jersey Club Kween herself, UNiiQU3, explained. According to her, Baltimore club is a little slower, with a focus more on instrumental samples like horns. UNiiQU3 performed on The Other Side’s stage and delivered an hour of versatile, hard-hitting dance tracks. No matter where she performs in the world — whether it’s Amsterdam, Melbourne or Denver — UNiiQU3 never compromises her style. “I just do me, 100 percent of the time,” she said.

She MCs her DJ sets as she mixes, injecting her heavy club tracks with live vocals that, without fail, make crowds go wild. “In London, they’re excited about hearing [me MC] because I have an American accent — I think they’re used to grime MCs and their [English] accents. Having showmanship and hyping things up, they love it, they’re like ‘that’s some American-ass shit,’” she said with a laugh. UNiiQU3 produces tracks that are undeniably dance-inducing and her live sets are just as spirited — if not more.

Headlining the night of heavy bass music was DJ Craze, a Miami-based, Miami bass turntable mastermind. He is the only solo DJ in history to win the DMC World DJ Championships trophy three consecutive times. His scratching abilities are rivaled by no one as he throws down booty-shaking track after track.

The Other Side’s headlining act was none other than Daddy Kev, founder of the weekly experimental hip-hop and electronic night in Los Angeles club, Low End Theory. The legendary club night, which took place every Wednesday from 2006 to 2018, served as the launchpad for artists such as Flying Lotus, The Glitch Mob, Daedelus and Nosaj Thing. Daddy Kev also owns the record label Alpha Pup, which provides distribution for over 80 record labels. He was nominated for a Grammy in 2016 for mixing Flying Lotus’s song “Never Catch Me,” featuring Kendrick Lamar. In a brief interview with 303, Daddy Kev hinted that Alpha Pup has a lot in store for 2019 but remained tightlipped on any details.

Other acts on the heavily stacked lineup included a resident of the Chicago-based footwork collective Teklife, DJ Taye. Footwork is a spin-off of early Chicago house tracks often referred to as ghetto house. Like the name implies, footwork tracks are shuffled and fast, usually spinning at around 160 beats per minute (bpm). DJ Taye’s set in the main room had the dance floor breaking out into dance circles, even prompting members of his own crew to shuffle across the stage. While DJ Taye mixed dancehall with trappy beats in the main room, Jubilee brought heavy Latin influence into her Miami bass set. She tested the capacity of the powerful sound system with heavy-hitting bass lines and hard, clubbing beats.

From Compton came founding member of the rap group N.W.A, Arabian Prince, who flawlessly mixed Old-Skool electro in the main room. He mixed the 1983 track “Clear” by Cybotron aka Juan Atkins, one of the forefathers of Detroit techno. The track is most recognized as a sample used by Missy Elliot in her hit, “Lose Control.” Arabian Prince also mixed Kraftwerk’s 1992 techno track “Numbers,” with the analog drums and vintage vocoder reverberating richly through the main room from the massive sound system. Before the end of his set, Arabian Prince took to the mic to announce, “I’ve been DJing for a long time — since 1983,” as he dove right back into his enthralling mix of Detroit techno and electro. Following Arabian Prince, DJ Deeon kept the energy of the main room high with an Old-Skool Chicago ghetto house set. He played Chicago legends like Jammin’ Gerald and Paul Johnson, bumping tracks at 135 bpm and making the whole room break out in a sweat. Brooklyn-based Dieselboy brought his fast, aggressive drum ‘n’ bass to The Other Side. Dieselboy’s set satisfied those who like their bass delivered at no less than 160 bpm.

Overall, Red Bull brought all different types of bass music not heard nearly enough in Denver’s nightclubs. Each set was diverse and original in mixing style, track selection and showmanship and brought a variety of sound from cities all across the US to an eager and welcoming dancefloor. As UNiiQU3 put it, “the Club Kid culture is coming back,” and Thursday night at Cervantes proved just that.