In Thai, the word Khruangbin means “flying engine” or “airplane.” While it may be a pain to pronounce, it sums up the music of the Houston-based trio perfectly. With their atmospheric instrumentals, the lofty soundscapes of Khruangbin will take you to new places. Their performance this Saturday was no exception. With an almost mystical presence, Khruangbin simply hypnotized the Ogden in their final performance of the year.

Khruangbin was joined by the equally quixotic Los Angeles quintet, the Marías. Mindfully manicured vintage dream pop cascaded into the sold-out crowd — easing Denver into their Saturday night. With a captive audience swaying gently to the tide of their sound, the Marías dove into their small but mighty discography. With a velvet-toned voice that penetrates crowds at barely above a whisper, the Marías are fronted by none other than Maria herself — whose casual shifts between English and Spanish induce a smoky nostalgia for the LA lounges of yesteryear. When met by the voice of drummer Josh Conway, Maria’s timbre shifts into a sun-soaked dreamscape of their native Hollywood Hills. Lush and cinematic — the Marías slow-burning funk feels like a retro pool party. 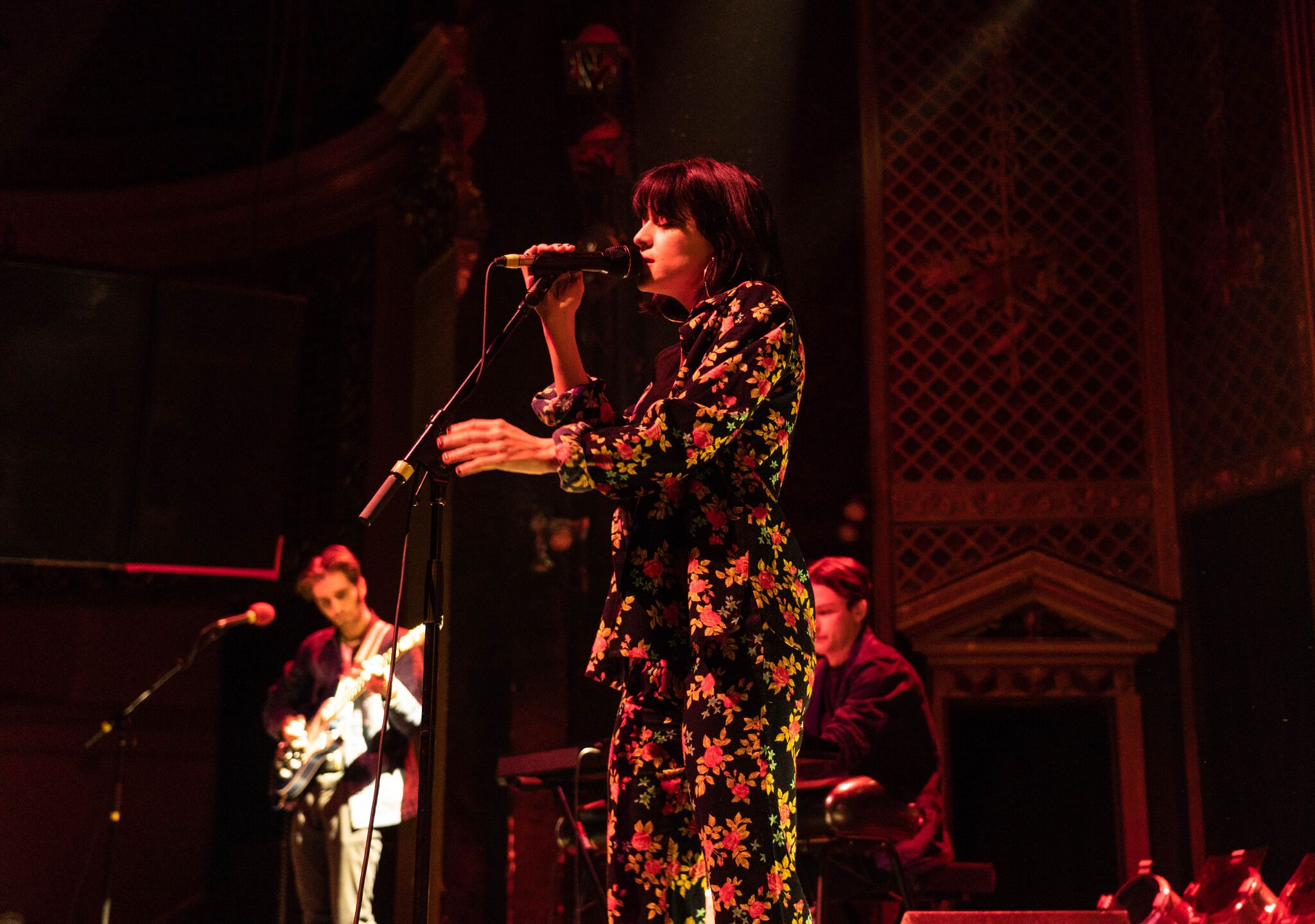 Grooving into the heavily psychedelic “Only In My Dreams” off 2017’s Superclean Vol. I, the bunch flexed their impossibly organic precision. Effortlessly, the band shifted gears between their sultry lounge style and their bouncy retrofitted funk. Ending the night on a high note, the Marías played out with the effervescently sexy “Cariño.” The track’s infectious bump left the crowd whirling and ready for more but with a charming smile and airy “thank you” the Marías descended the stage.

After a break that teetered on endless, the buzzing crowd crested into a roar as the lights dimmed and one by one Khruangbin took the stage. Adorned in their usual inky and bang-heavy wigs, bassist Laura Lee and guitarist Mark Speer heralded the front of the stage while the wigless-yet-enigmatic Donald “DJ” Johnson held it down on drums. Without pause, the trio radiated into their set — opening with the fantastical and rippling hidden track “Bin Bin.” Mysterious and mellow, Khruangbin sifted through their Technicolor light show with a seductive ease. Perhaps their greatest charm is their secretive style — hiding behind their bangs and sharing few words. But the trio’s commitment is to their sound. And the result is nothing short of transportive, each song dreamily teleporting you to exotic new spaces. Serpentine instrumentation ties each transition together, spiraling off the stage and seeping into the pulsating crowd. Lee’s lips glittered through the lights as she softly vocalized on the striking track, “Cómo Me Quieres.” 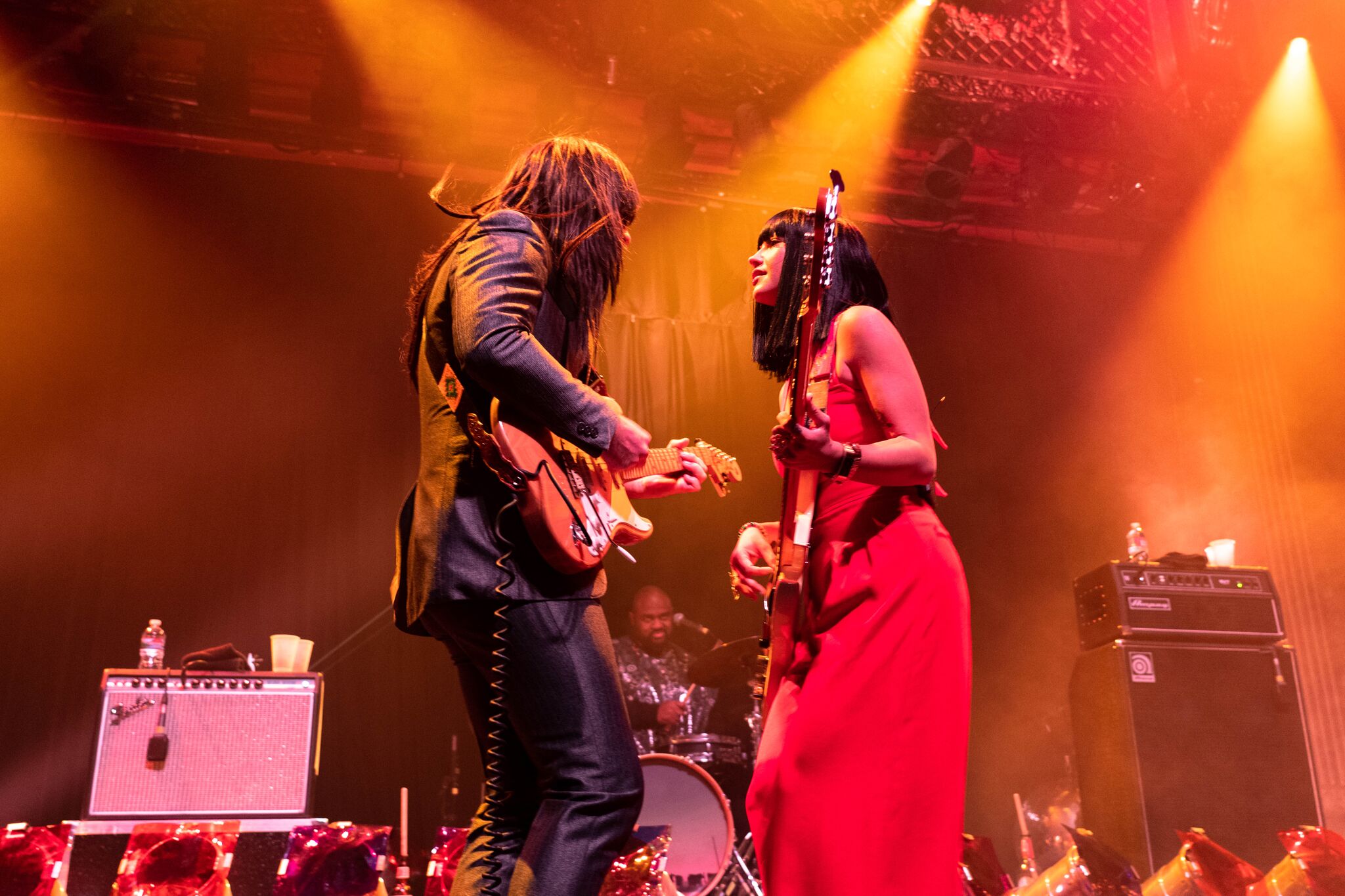 With hallucinogenic fluidity, the trio took Denver on a voyage across their vast soundscape— intrepidly covering the bulk of both 2015’s The Universe Smiles Upon You as well as 2018’s Con Todo El Mundo. Speer softly thanked Colorado fans, noting the familiar faces as well as the new ones with a soft smile before introducing the simply groovy, “Friday Morning.” With its indecipherable vocals purred in three-part harmony, the track lulled Denverites to a sway. Khruangbin feels theatrically choreographed — Speer and Lee’s uniformed undulations with the bounce of Lee’s bassline, their cryptic smiles shared for brief flashes and their righteously retro outfits all complete their masterful vision. Such theatricality was only further pronounced as they bounced into a funky-fan favorite, “Evan Finds the Third Room” — where Lee answered the ringing of a lone green rotary phone to address the audience with psychedelic omniscience. 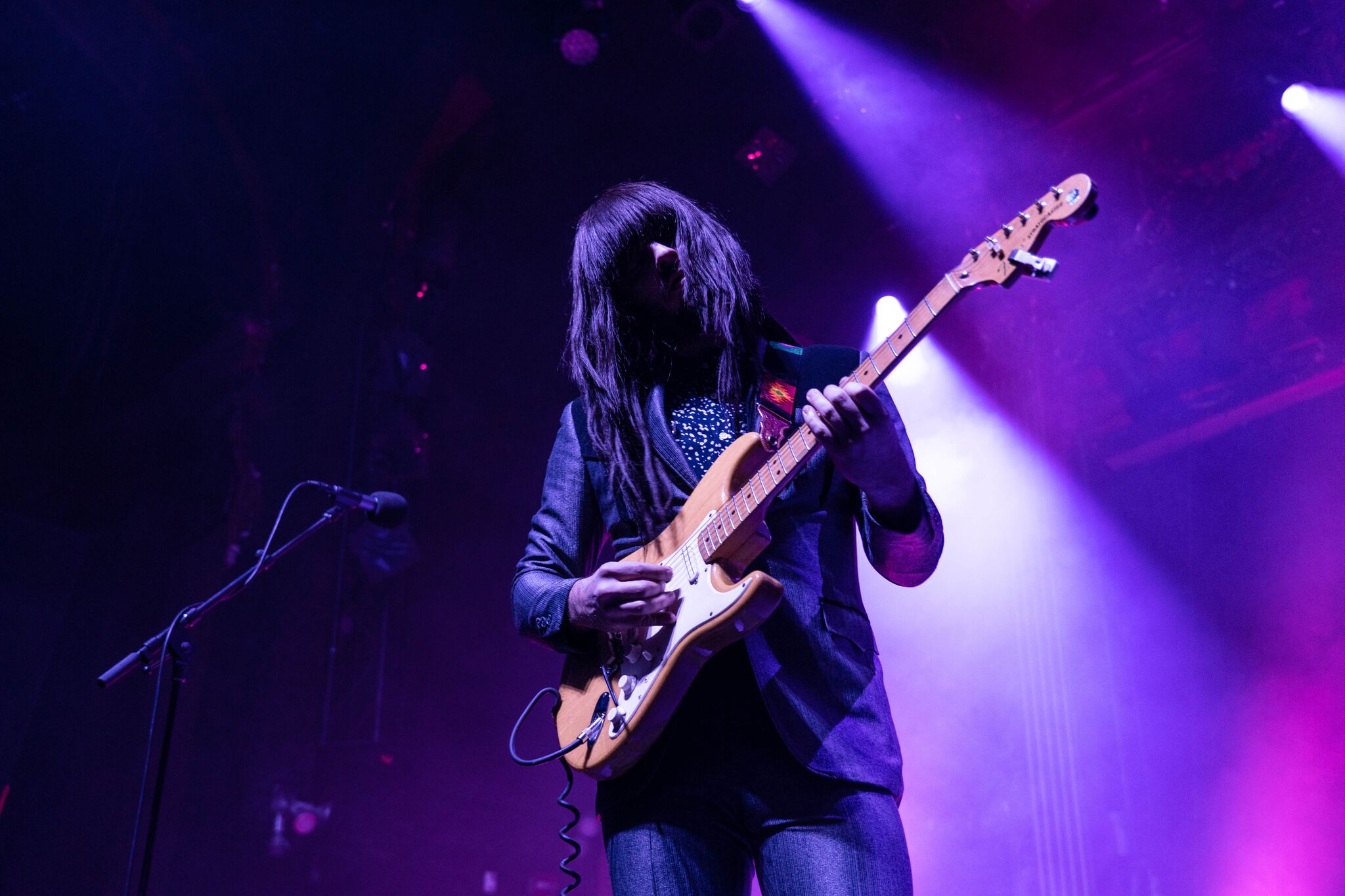 It’s incredibly hard to pinpoint Khruangbin’s sound. The dreamy trio weaves in and out of the realms of psychedelia soul and funk on each and every track. This complexity and infusion of style only lending to their commanding presence — the puzzling effect turning the Houston trio into snake charmers whose spiraling songs incite ecstatic whirlpools on the dance floor. Their eclecticism could truly be felt Saturday night as they wound down their set into a kaleidoscopic medley of covers— blending nostalgic instrumental renditions of hip-hop and soul. From Dr. Dre’s “The Next Episode” to Chris Isaak’s “Wicked Game” Khruangbin flexed their infusive nature with lucid prowess to an awestruck audience. Without skipping a beat they fused their own swelling “Maria Tambíen” into the mix, polishing off the set with intoxicating interludes of The Sugarhill Gang’s “Apache.”

After a brief set change, Denver was treated to a hearty five-song encore— introduced by an expansive solo percussion set from DJ, who was joined by his bandmates slowly but surely. The mood had shifted to absolute jubilance, noted by a dazzling costume change from Lee and broad smiles all around— Khruangbin was clearly in high spirits and quick to note that this was, in fact, their last show of the year. Feeling festive, the trio shifted gears to their groovy rework of Vince Guaraldi’s “Christmas Time Is Here” —  a Charlie Brown Christmas classic. Gleaming in the light and the moment, Khruangbin shimmered into the churning masses. A wig was flung into the air and caught by Lee, who held it close with a gracious smile. Capping off an incredible evening with the zealous “People Everywhere (Still Alive)” emotions ran high as the mysterious bunch finally let the crowd in— with big smiles, sincere thanks and new wigs. 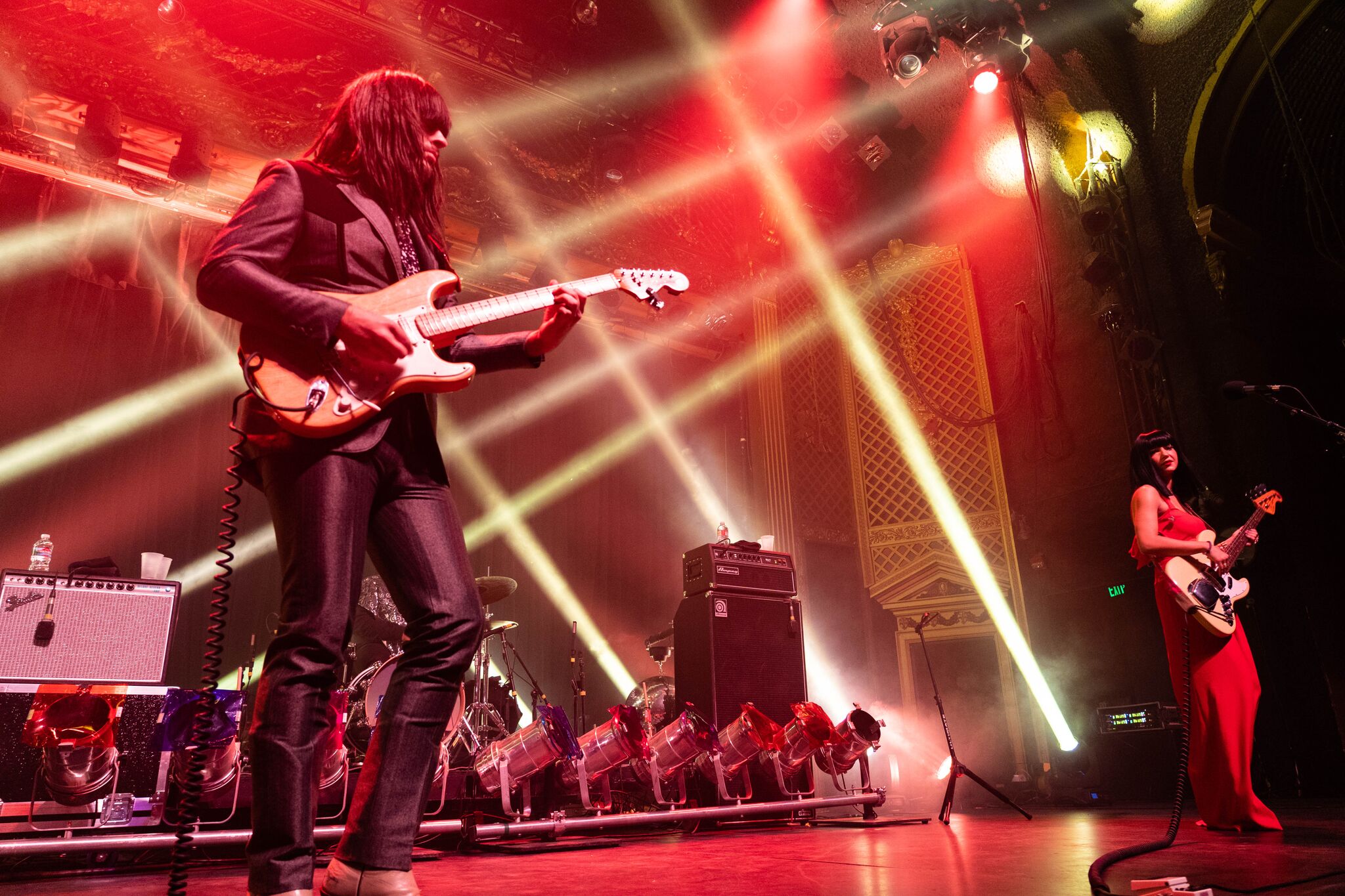 After celebrating a transcendent 2018 here in Denver, the trio left the stage for the second time with nothing but love and promises to return soon. Slow to awake from the trance, the Ogden gradually poured back out into the streets of Denver teeming with excitement — the Mile High City was taken even higher by the enchanting allure that is Khruangbin.