It seems like it’s been longer than a year since the LoDo art gallery K Contemporary opened. That may be because the roster of artists has been nothing short of world-class, with a few of them going on to land major shows at other galleries and museums. But even if time has betrayed fans of the new gallery, this weekend it will celebrate its one year anniversary with a group exhibition featuring an impressive collection from 21 artists. Titled As of Now, the show will only be on view from December 15 to December 29, 2018.

“I am so grateful for the ongoing support of K Contemporary from the Colorado arts community,” K Contemporary owner Doug Kacena. “I feel incredibly lucky to be working with such fabulous artists and love the momentum and energy we are bringing to Denver. My primary goal for the gallery remains the same for 2019 — first and foremost I want to help artists make a living and have the support they need for their creative endeavors. We need to eliminate the romanticized paradigm of the starving artist from our vocabulary.”

The first show that was displayed at K Contemporary was Scott Young’s Gas Light Love Bomb in November 2017, which attracted attention to the gallery like moths to a flame — or rather, like Instagrammers to neon lights. Even if a lot of people visited the gallery in the month of Young’s exhibition just to photograph and admire, that seemed to be enough to attract them back after the neon lights were gone. A piece of that first show still sits in Kacena’s office — as a memento and a motivational tool — and K Contemporary has continued to represent Young at various art fairs across the country, including Pulse in Miami. 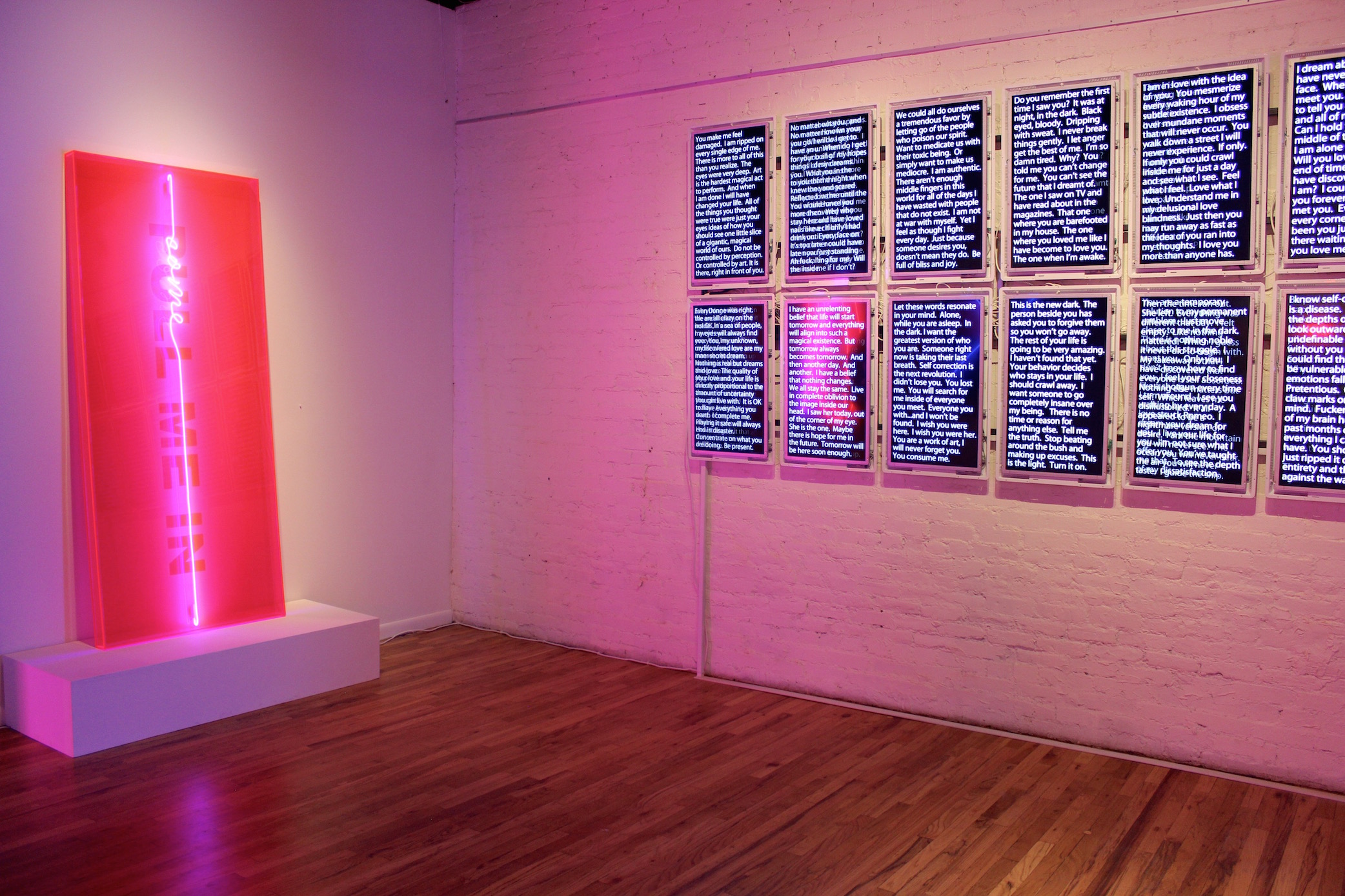 K Contemporary didn’t fizzle out after that first successful show, obviously. That may be in part because it shares the physical gallery space with two other galleries — both of which have been major players in the Denver art scene for quite some time. Abend is one, formally located in the Savageau building on Colfax and York, and Gallery 1261 is the other. Altogether, the three galleries create the 1412 gallery collective which allows all of them to have a fortified team while splitting the cost of everyday operations, other logistics and — especially in LoDo — rent. Every month or so the exhibitions on the top level and ground level change in a rotation among the three galleries.

“Denver is home to such a dynamic art scene and I think it is high time that we make our mark nationally and internationally. I plan on doing my best to bring awareness to all Denver has to offer from our museums and galleries to the DIY projects that are the lifeline of our creative community,” commented Kacena. “I hope to develop as many synergistic partnerships with like-minded artists, institutions and patrons in order to elevate Denver to the level of attention it deserves.”

The second show K Contemporary curated in December 2017 was titled Introductions — a fitting title because it showcased about a dozen artists that later would either display a solo show at the gallery or other group shows. Some of those artists will be represented at the one-year anniversary show as well — making it a one year anniversary for their relationship with the gallery as much as it is a celebration of K Contemporary itself.

One of those artists is Suchitra Mattai, who in April was featured on the lower level with her solo exhibition Sweet Asylum. Using a variety of textiles, antiques, thrift-store-finds and other “found” objects, Mattai transformed the gallery space into a welcoming — and slightly abstract — home. She experimented with colors, patterns and iconography to make visitors feel as if they were in someone’s home, but also managed to imbue her own experiences and upbringing in a way that felt comfortable. After this show, Mattai went on to display at several galleries across the country, produce her largest exhibition to date at the Center for Visual Arts in Denver and also started working on pieces to be included in the Sharjah Biennial in 2019. 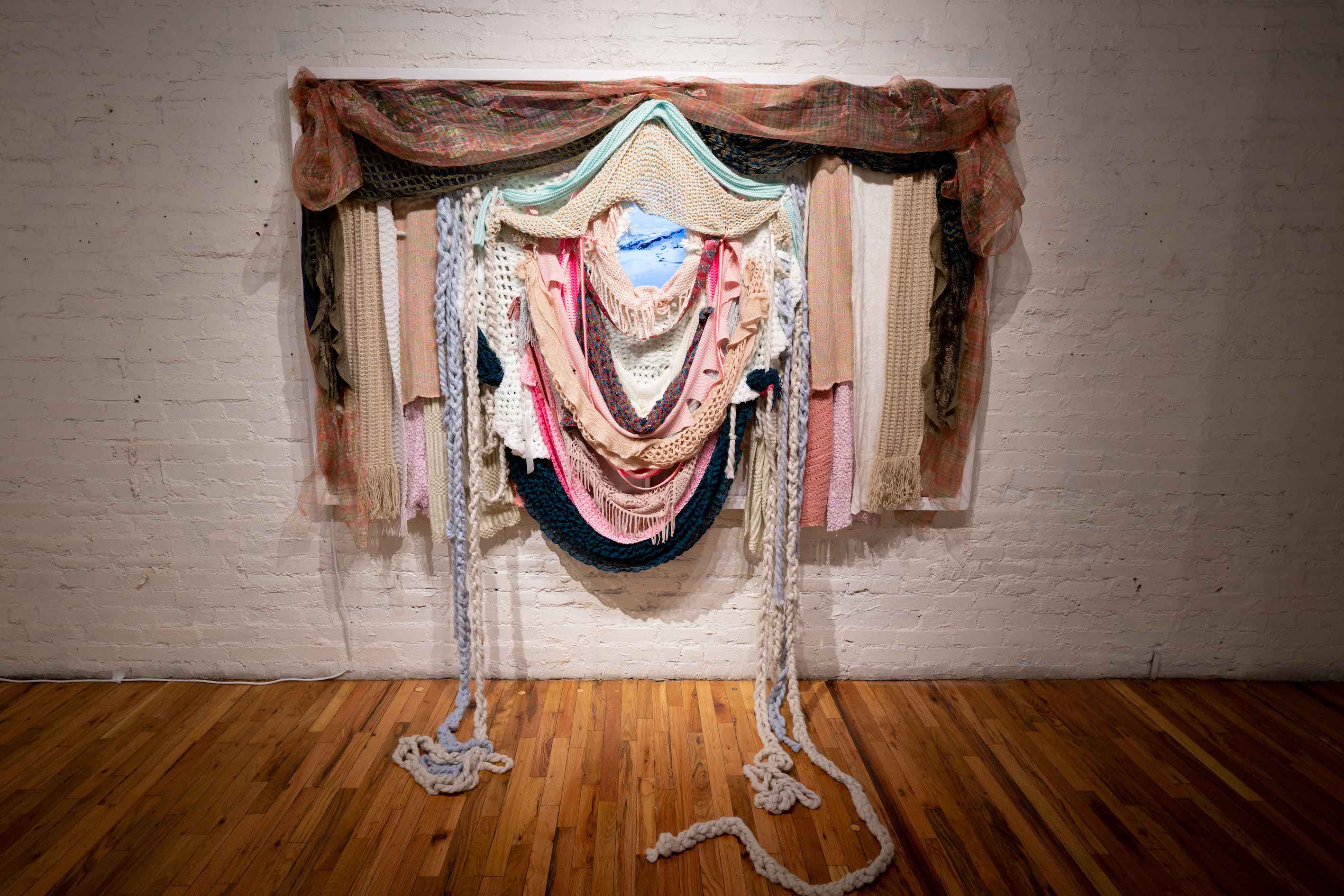 During this first year, not only did K Contemporary put on several memorable and well-received shows, Kacena also started bringing on artists to experiment in the “project space” upstairs — a small alcove set aside from the main gallery exhibition space. Part of the ethos of K Contemporary is to showcase artists who bring an immersive or experimental element to their gallery work, so the project space is even more of a laboratory. Among others, Denver-based artist Mario Zoots took over that space in May and fully embraced the idea behind it, producing a mesmerizing piece composed of book covers painted with basic geometric blocks. That project space may be an overlooked nook in the art scene where you could find your next major art obsession.

At the one-year anniversary show, Young, Mattai and Zoots will all be featured. The other artists you can expect to see work from as well are Monique Crine, Michael Dowling, Trey Egan, Carlene Frances, Melissa Furness, Michael Gadlin, Robin Hextrum, Kuzana Ogg, Daisy Patton, Angel Ricardo Ricardo Rios, Karen Roehl, Jonathan Saiz, Kevin Sloan, Kristin Stransky, Nina Tichava, Goran Vejvoda and Sarah Winkler. And, although Kacena is a talented curator and gallerist, he is first and foremost an artist and will also be displaying work during the anniversary show.

With the talented list of artists and the rapidly growing esteem of K Contemporary, this quick exhibition might be the best one to end 2018 on. After all, it was a big year in art for Denver and many of these artists will be at the forefront of contemporary art in the near future.

The opening reception is on Saturday, December 15 from 6 to 9 p.m., free and open to the public. K Contemporary is located at 1412 Wazee Street and is open Tuesday through Saturday from 12 to 6 p.m.