This South Broadway Shop Only Sells Items From the ’80s

If you were born in the 1980s, a peek inside this quirky, colorful store on South Broadway in Denver will flood you with memories. Fifty-Two 80’s A Totally Awesome Shop! is named for the Mile High City and arguably the best decade according to shop owners Dede Thompson and her partner Tony Vecchio.

The nostalgic shop is home to, you guessed it,  collectibles, toys, games, costumes and other memorabilia from the ’80s. Thompson and Vecchio just celebrated their store’s fifth anniversary this month on October 6 and honored the age of pop culture, radio and Saturday morning cartoons with an ’80s-themed dance party. Fifty-Two 80’s is only open 28 hours a week, but that’s no excuse to miss out on the fun. This eccentric store is always preparing for customers to take a righteous walk down memory lane. 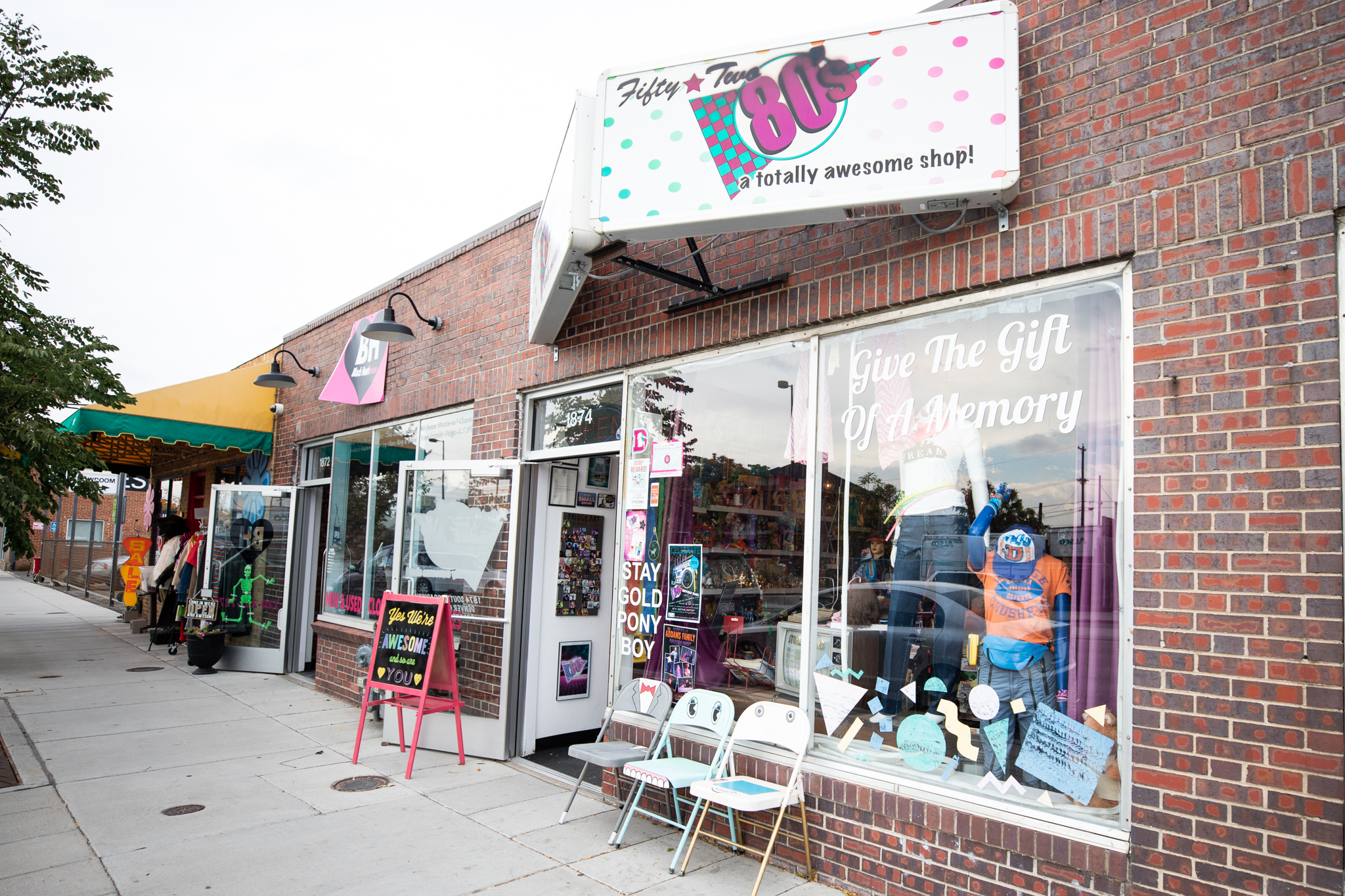 We had to ask Thompson and Vecchio why they chose this ultra-specific theme for their store? It turns out the idea was pretty random, but the store was the first of its kind in the US.

“There was nothing like it at the time. Five years ago there was nothing in the country that was dedicated to the ’80s the way this store is. Now there are a handful of stores throughout the country. There’s one in New York. There’s one in California and Florida kind of doing what we do, but this is a really a unique situation. Although Dede and I grew up in the ’80s, we certainly weren’t collectors, but we felt that there was nostalgia about opening a shop like this.”

Thompson and Vecchio wanted their store to be completely 100 percent unique, but the main reason they decided to sell only ’80s toys and other collectibles is for the kids.

“Play has changed so much over the last 30 to 40 years, so we thought it’d be a good opportunity for parents to bring their kids in and kind of show them what we had to contend with. But it’s unbelievable how many kids come in here that are experts on this stuff because their parents pounded it into them,” Vecchio said.

“With access to Google and everything else, they’re so educated on the ’80s, so that was why we decided to open. We wanted parents to show their kids what we did and how we did it. Back when we were playing with toys, we really had to use our imaginations and come up with intricate battle scenes or roadways and tunnels for our Hotwheels. Nowadays, kids don’t have to do that. They don’t have to come up with a lot on their own.”

The South Broadway store, which is a blur of color and figurines, is quite the spectacle when you walk in. It has roughly 6,000 items for purchase all displayed in the 900 square-foot space, all on the market from 1975 through 1995 (although, most items are from the ’80s). When Thompson and Vecchio aren’t manning the store, they travel to purchase items from thrift stores and peruse basements and attics of local sellers. All in all, their vast collection has taken a long time to compile, and it is only getting more expansive.

Some of the items you probably wouldn’t expect to find — like limited edition glassware from McDonald’s and Burger King, but the rare finds are what make the store so fun to sift through. They even have vintage Broncos merchandise.

Both Vecchio and Thompson agree that they never really know what’s going to sell very well, but that the Star Wars stuff always goes fast in addition to vintage arcade and video games.

We had to ask what their favorite items were.

“The old-school Godzilla stuff from the late ’70s and early ’80s. I grew up watching Godzilla and so it resonates with me,” Vecchio said.

“Also the old Halloween costumes from the ’70s and ’80s — if you had one of those back in the day you were doing well for yourself and living large. If your parents didn’t make you be a hobo or a clown or something else you could whip up yourself —  that was pretty awesome.”

Thompson said her favorite toys are the ones she played with as a little girl.

“The My Little Ponies or Strawberry Shortcake dolls. Those were things that I played with as a little kid and of course, I’m in charge of brushing the hair of the dolls when we get them in. I feel like I’m six years old again,” she said. 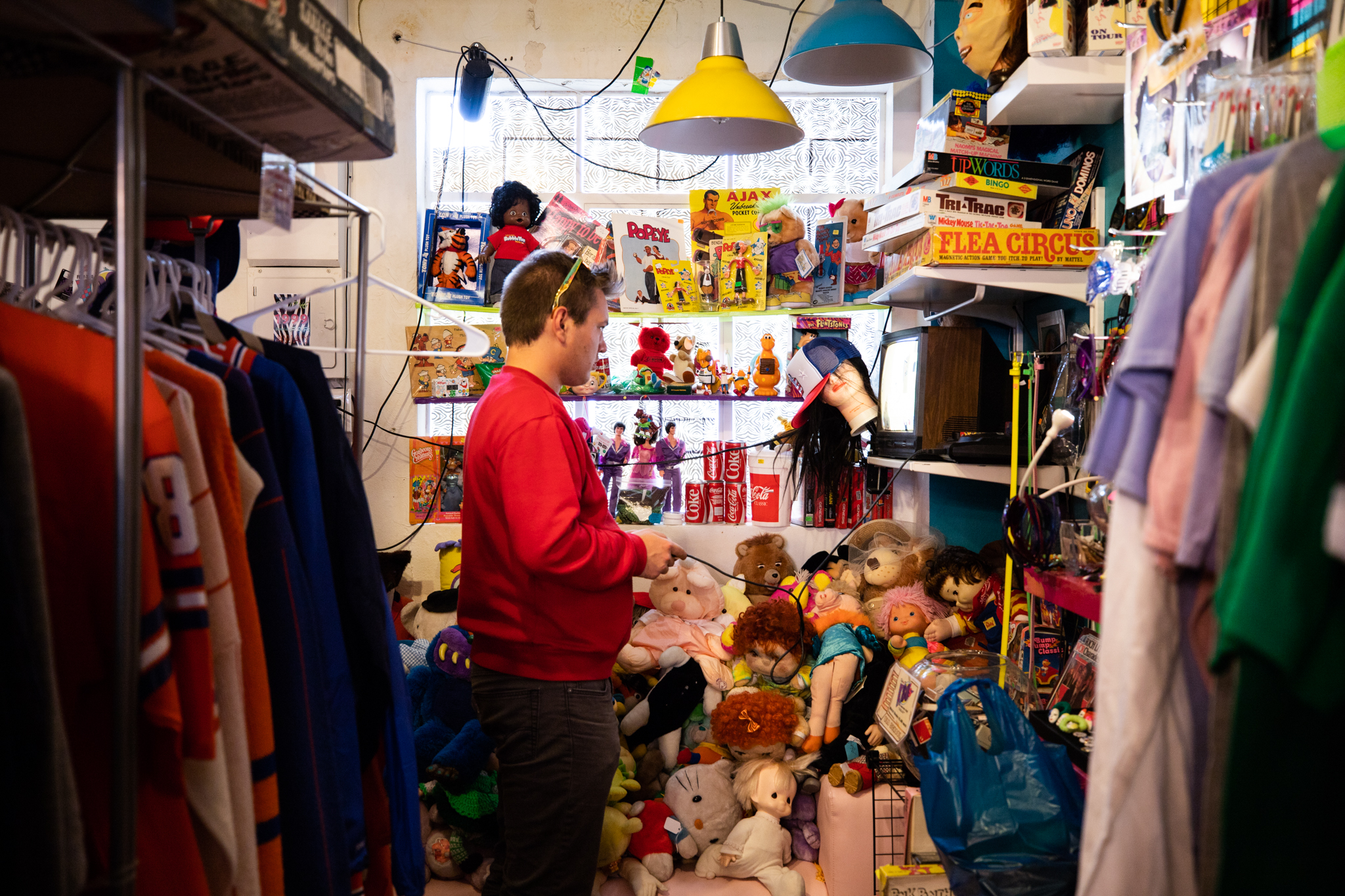 And Fifty-Two 80’s does take donations and buys items. If you have anything from your past collecting dust in your closet, they might buy it from you or graciously take it off your hands. Thompson and Vecchio love to buy locally in order to better serve the Denver community. They’re so local in fact, that their website doesn’t have anything other than a loading bar — and never takes you to a homepage.

“We only sell locally. We’re not online. We love being local. And that’s all that we are,” Vecchio said.

The best part of being local though is the customers. Thompson and Vecchio are always amazed at the response they get when people walk in their store — mostly because it’s always different.

“When Dede and I decided to open this shop, we didn’t know the kind of impact it would have on people. People get really emotional about being in here. It’s a fun emotional and sometimes it’s a sad emotional. It’s unbelievable all the emotions we see. We didn’t really consider that this was going to be somewhat therapeutic to some people. It’s interesting hearing each story in here,” Vecchio said.

“Early on, when we first opened, we had a lady come in and Dede and she was really emotional about being in here and we didn’t know how to take that. She was really teary-eyed. She picked up a few things like a Teddy Ruxpin, a Pound Puppy and a Rainbow Brite. She comes to the register and starts to tell us this story about how when she was 12 years old, she ran away from home and those three items were the last things she saw on her bed when she closed the door to her bedroom. She never went home again. She lived on the streets for two years straight and was never a kid again consequently. She grew up very, very quickly. She is now in her thirties and just remembered seeing those things and remembered how that was the end of her childhood. That was the end of innocence for her. Just to be able to buy those things back and hold them near and dear to her heart again was just an amazing situation. It’s priceless for us to see moments like that.”

But not all the stories are heartbreaking.

“We had this guy come in and he was kind of like this tough looking guy — all tatted up with piercings. He comes up with a Cabbage Patch Kid. And I said kind of jokingly ‘Did you have a Cabbage Patch Kid?’ and he said, ‘Aw, no, my sister did. And I destroyed it. I’m going to get this for her since I owe her one,’” Thompson said.

The ’80s might be over, but for Thompson and Vecchio, the memories are still there and they’re trying to hold onto them. They do remember a lot about their favorite decade. Vecchio’s favorite memory is Saturday morning cartoons and riding his bike until the streetlights came on.

“Things have changed so much but we conserve it a little bit,” he said. “We’re hanging on.”