The Punch Brothers pummeled their way to the headlining stage of Red Rocks last night with the lovely Gillian Welch in tow as co-headliner. The Punch Brothers formed in 2006 by the hand of lead singer Chris Thile, though they did not hit the road to tour as the Punch Brothers until 2008. In the last 10 years, they have released five albums, two EPs, a documentary and received a Grammy nomination for Best American Roots song in 2016. On top of that, they have made a name for themselves within the bluegrass community as a truly genre-bending contributor to the scene. They are a staple at the Telluride Bluegrass Festival and their most recent album, July’s All Ashore, has been received with much enthusiasm. 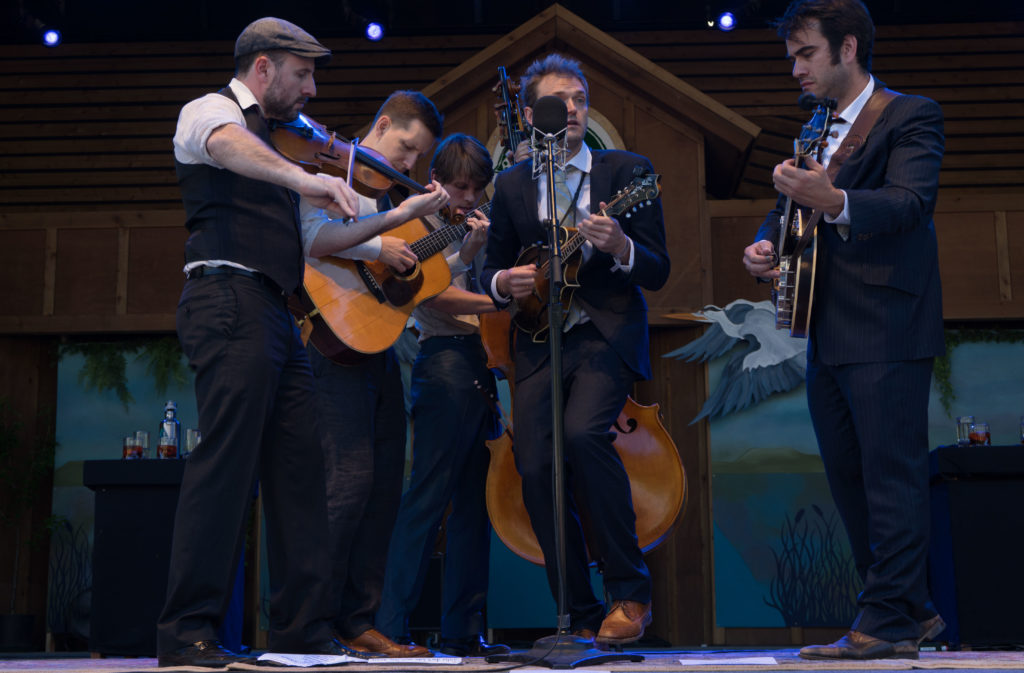 While the Punch Brothers can bring in a crowd, Gillian Welch is certainly enough reason for excitement on her own. The singer-songwriter has several critically acclaimed albums released under her belt, and she carries with her a following of devout bluegrass fandom. Welch was an assistant producer and performed on two songs on the platinum, Grammy-winning soundtrack to O Brother, Where Art Thou? and has received more than one Grammy nomination herself. Welch started the evening off with her ever-near sidekick, David Rawlings. The pair did not disappoint with their simple yet traditional minimalist setup. Just the two on a rug, with no more than a couple of banjos and a harmonica set up for later. Welch’s quick wit, enchanting voice and Rawlings’ sheer talent on his instrument created a set that has been unmatched so far this summer.

The duo admitted it was their first time at Red Rocks, although Welch gave the crowd a hilarious anecdote about a Grateful Dead concert she attended there where she lost some money. As they went into “Annabelle” off of their first record, Revival, Welch commented that the record was old enough to drink, shedding light on the impressive career the two have shared on stage. While Welch’s voice remained the main act of their set, it is Rawlings who is the force of energy that grabs hold of the attention of the room. Known for their darker subject matter, Rawlings referred to one of their tracks as having a “body count” and Welch concluded their set with a “killing song,” namely their hit “Caleb Meyer,” before a quick retreat and an encore of “Time (The Revelator).”

The five members of the Punch Brothers circled around the few microphones on stage in their dapper dressings and kicked off their smooth set around 9 p.m.”My Oh My” was the first big hit they unleashed to the evening, which they sang with the entire crowd in unison. Signature shouts of “Ahoy!” spurted out from Thile and were met in return from the fans in celebration of their 2012 EP of the same name. Thile’s theatrics were in a full swing right from the gate of the evening, with his falsetto ringing in full force through “This Girl.”

As Thile drank from a tiki cup, he introduced a couple of instrumental jams that were dedicated to tiki cocktails — specifically Three Dots and a Dash and Jungle Bird. “Jumbo” had bassist Paul Kowert showing his face to the limelight, in similar fashion Noam Pikelny shook the monoliths with his solo on the Edgar Allen Poe themed track, “Another New World.” The air continually dipped to cooler temperatures and after an eccentric final song, the band returned for their expected encore. What served to be the surprise, however, was the joining of Welch and Rawlings, closing out the evening in a festive and family-like jam that perfectly ended a spectacle of talent at the world’s best venue.

There is no better way to spend a warm Colorado night than by listening to bluegrass at Red Rocks. The Punch Brothers may hail from Brooklyn, but their sound was meant for the mountains. As sure as their fan base stays put out here, they will return to an open and appreciative Colorado crowd.