No matter how much you listen to an artist, how much you idolize, admire and air guitar (maybe even real guitar) their songs, they won’t come alive until they’re standing 50 feet away playing their hearts out. No one’s ever fully prepared for that level of anticipation. I remember reading a review of Sleigh Bells’ sophomore album saying they had tanked on this one. It felt sophisticated to believe the reviewers. But last night, there was no weakness. Every song they played delivered with intensity and potential to awe — true rockstars. When I was a kid, my friends hardly knew who Weezer was, much less the Pixies. For years I listened to Weezer’s block-colored albums, critiquing with a fine-tooth comb like any loving fan. Any complaints I had before last night were wiped clean from memory, a sudden reset in the face of their live performance.

Sleigh Bells lit up the stage first with their brand of angry electro-rock. Lead singer Alexis Krauss has a flair for the dramatic, headbanging and crooning — summoning the still-sparse audience to pay attention and clap along to a complicated beat. Red lights engulfed her as she jumped from one edge of the stage to the other. Punching the air, her pop vocals hit the audience square in the stomach, lurching them forward to mimic her headbang. Sleigh Bells made it clear their career in the rock landscape was nothing if not solid as ever.

Pixies, in contrast, lacked for the first half of their set. Seasoned on stage, there was an expectation for more based on the classic punk-rock personality inherent to their music. The first few songs they seemed bored. It was not disappointing, necessarily — they played the music well, but their presence was lackluster. Lead singer Black Francis had to stop mid “Here Comes Your Man” when he forgot when to come in, saying, “After playing that song for so long, we’ve played it a few times, I just sort of blanked. So if it’s okay with you, we’ll just keep going like it never happened.” This was the most audience interaction they had. His rebel yells and whoops seemed tired. Nevertheless, they got the crowd excited. The masses screamed lyrics back, echoing like a waterfall down the rows of seats. To their credit, punk doesn’t always fare well in a big, open venue.

Maybe it was the crowd but thankfully, something awakened as their set progressed. They brought the raw ear-ringing expected from the band. Paz Lenchantin’s baseline shook the Amphitheatre, vibrating rock ‘n’ roll electricity through four thick strings. The brief instances she sang were wanted more and more. As the band’s pace quickened, a nervous energy overtook and the crowd moved to the heavy guitars.

Finally, it was time for Weezer to take the stage. From the time they dropped the black veil that shielded the stage set up, each part of Weezer’s show was a mystery. The only thing we anticipated that actually showed up was a big, winged “W” full of lights but only after the original set lifted into the air and flipped itself over.

They played classics right off the bat — “Buddy Holly” and “Beverly Hills,” two perfectly action-packed anthems that pumped up the crowd. There were plenty of amazing covers as if their own discography weren’t impressive enough. Through the thematic light shifts, a crew member undressed lead singer Rivers Cuomo while a topless woman in the front vied for his attention. And the band just kept playing like this was all totally normal. Their natural habitat is the rockstar life. As Cuomo put it during a trip around the amphitheater in a makeshift Weezer sailboat, “You know what guys, the spotlight’s kinda dark for the level of rockstar I’m at.”

If I’ve had one long-held thought carried through his work, it’s that Cuomo shouldn’t sing in falsetto. Last night, however, when he performed “Take On Me” solo he proved me wrong, soaring with that unforgettable, ever recognizable high note. It was one of the best rock shows I’ve ever seen, from guys who started out in sweater vests. They are the original awkward cool. Rock ‘n’ rollers to their core, they delivered what I thought was undeliverable — surprise. The lyrics are classic, the songs have been around for decades yet everything felt new.

Sparks flew, smoke went up like mushroom clouds and the band left the stage smoldering off a whirlwind night. At the first sign of an encore, the band returned to the stage as Cuomo climbed onto suspended scaffolding (that was really only for display), grasped a guitar and began playing “Sweet Child O’ Mine” upside-down. If we weren’t before, the whole crowd left feeling what Cuomo called “Weez-action.” 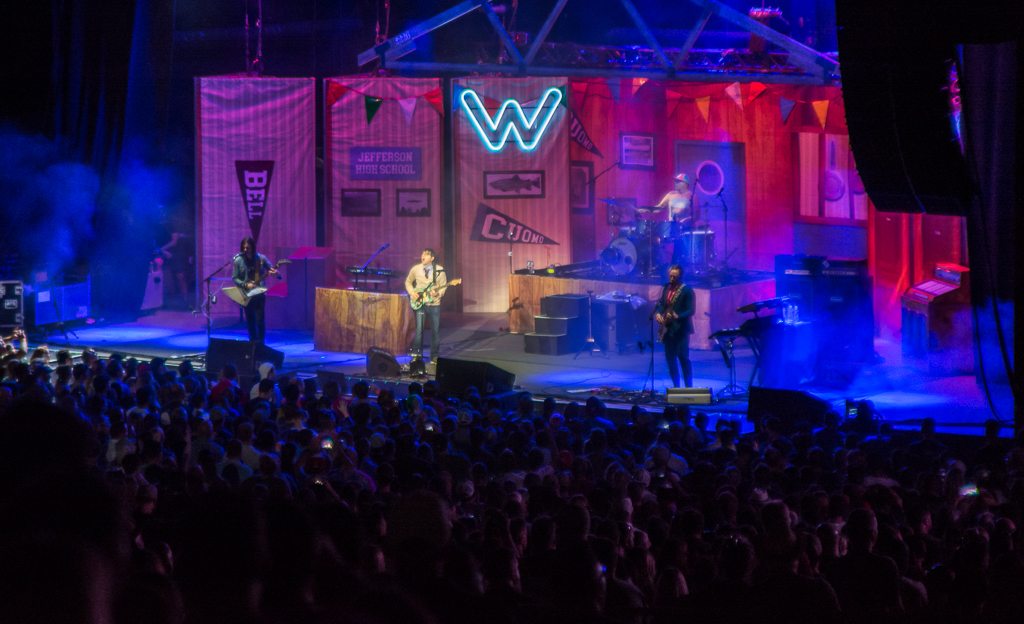