Father John Misty isn’t the shameless hippy you’d expect nor the cult leader of some enlightened philosophy — he’s far too self-serving. In the same way, Dave Chappelle would respond to a question of whether he’s funny, with a “motherfucker, I’m hilarious,” Father John Misty would respond accordingly to his greatness as an artist, and truthfully, he wouldn’t be wrong. Self-importance and pretentiousness are the mere footholds by which Father John Misty positions himself in pop culture.

The larger picture is of a rock star who rather than not give a fuck, gives too many. If for no other reason than to say he did — and to the chagrin of his detractors — it largely works. Coming to the iconic Red Rocks Amphitheatre for his second time as a headliner, Father John Misty was as grandiose as his ego and as palpable as his parody. He seamlessly whisked Red Rocks into an American daydream of his take on the current discourse, as only he could do. 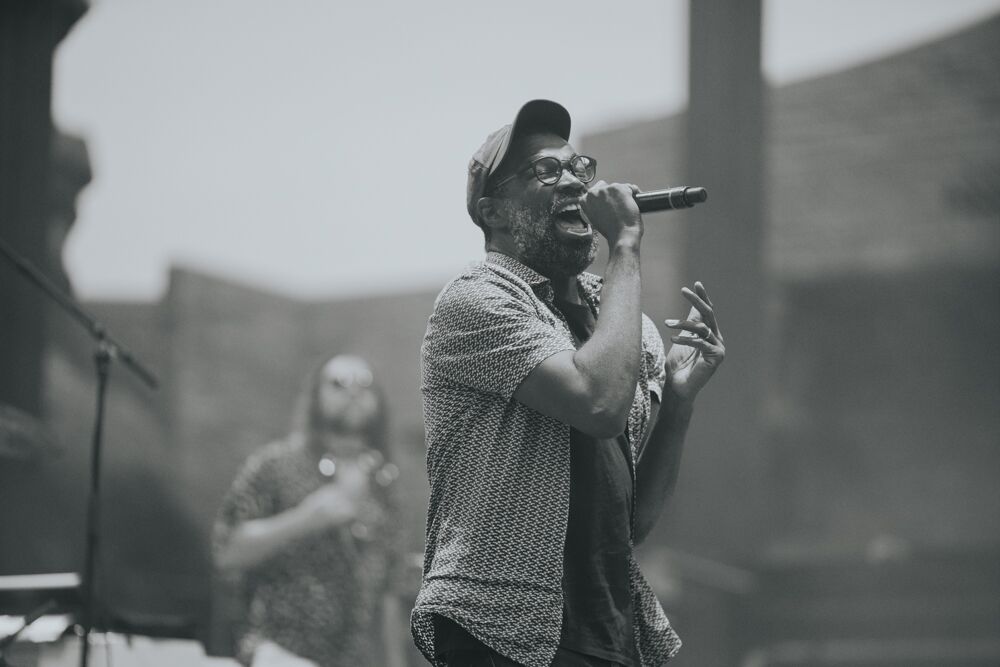 The ever elusive 2000’s indie-rockers TV on the Radio opened the performance. At this point, never knowing when the band will pop up, is an extension of being a TV on the Radio fan, but, low and behold, the band’s return to Denver was opening for none other than Father John Misty. Where Father John Misty is increasingly direct in his music, TV on the Radio is uncompromisingly abstract. What may seem like a poor match on paper, actually turned out to be great compliments to each other when all was said and done.

Beginning their performance with glitched vocals stretching into “Young Liars,” the band left Denver to their own devices to decipher the crunchy song. The set rocked and rattled to a funky stride of TV on the Radio hits, before going off the rails when the band launched into “Wolf Like Me.” What had been a chill, yet danceable set turned harsh and maniac, the equivalent of shaking the champagne bottle and letting all hell break loose. The band was electrifying, with singer Tunde Adebimpe lurching across the stage throwing his vocals in places they didn’t belong as the band chugged wildly after them. The same can be said for “Repetition” and “DLZ,” as the energy within the amphitheater bubbled over with boundless reciprocity. Ending the set with “Standing In The Sun,” we had time to reel it back in, but not before a rousing applause ushered the group off stage.

Following in quick succession, Father John Misty greeted Red Rocks accompanied by an entire string section and his whole band as well, taking over the entirety of the stage. Appearing in an all-white ensemble and immersed in yellow light, Father John Misty was a mere silhouette as he strummed the chords to “Nancy From Now On.” Introducing himself as the entertaining “idiot” we’d all come to watch, Misty promptly grasped the attention of the audience, refusing to let go. 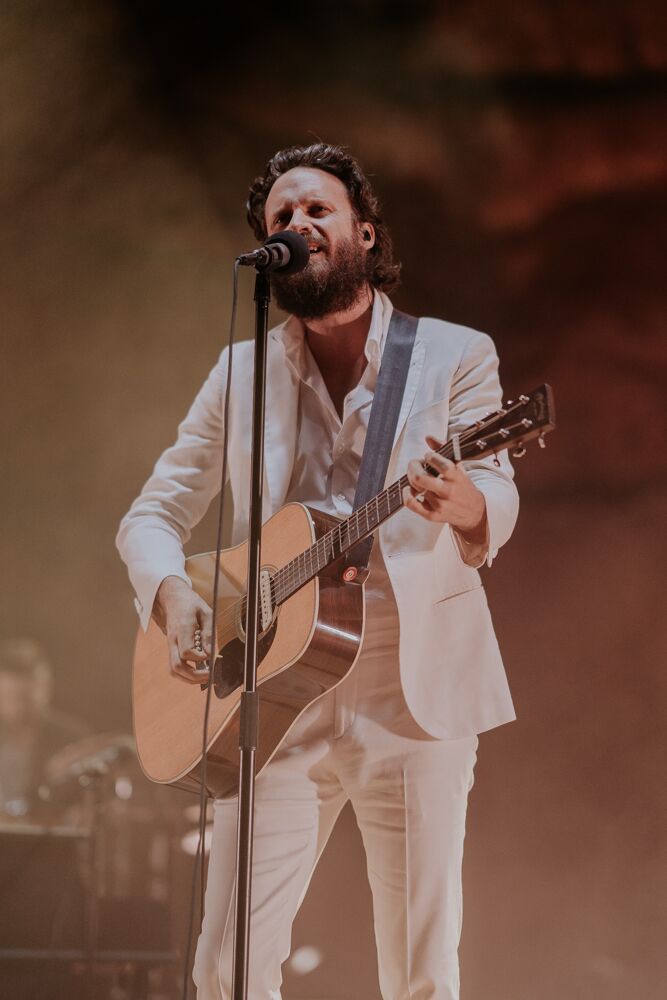 From the jump, there was a certain regality to Misty, one that echoed the greats of yesteryear and one that ensured the audience would latch on to every note and every word that drifted past the monoliths. For Misty, a man who is never short on words, it worked in his favor, as Red Rocks fought tooth and nail to regurgitate the verbose songs making the impact of the singer evident.

Sometimes on record, Misty has the pitfall of sounding like a soapbox preacher, assuring the end of days are nigh, but seeing him in person not only unveiled layers of urgency but a deep sincerity as well. Songs like “Mr. Tillman” frothed at the mouth with surreal lyricism threatening to become unhinged before coming completely apart at the end, as Misty retold the tale, the music behind him adding atmosphere and weight. The same can be said for “Hangout at the Gallows” and “Pure Comedy” which swelled with the presence of the string section but burned with the exacting tone of Misty. In fact, there were too many moments to count whereby Misty completely nailed not only the premise of his descriptive songs but played out the emotional core as well. 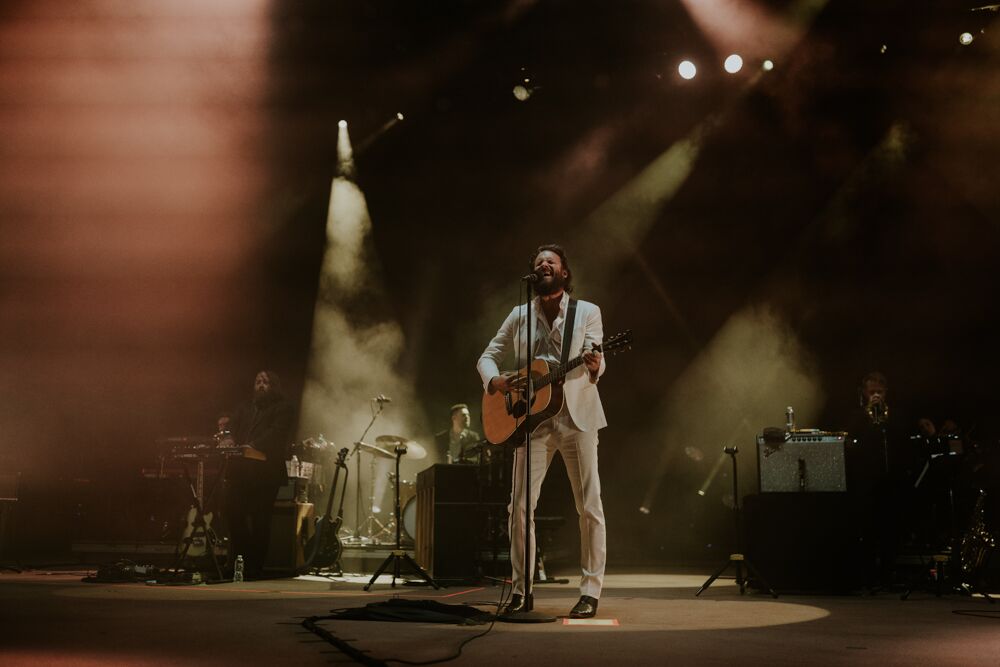 The pinnacle of such a precise depiction fell neither at the end nor the encore of the set, but rather the brutally honest “Bored in the USA” in the middle of his setlist. As Misty rattled off the unfortunate conditions of an American dream unraveling, singing, “they gave me a useless education, and a subprime loan on a craftsman home, keep my prescriptions filled, and now I can’t get off,” the applause became increasingly louder as each statement resonated deeper with the audience. By the end, you could hardly hear Misty over the cheers and hoots of the audience, grown sick and tired of the system they are in, and of which Misty finds a constant source of inspiration.

It can be easy to write off Misty’s tone as pretentious and preachy, but, as evidenced in his brilliant Red Rocks performance, it is a message we need to hear, now more than ever. Even if Misty is attempting to stir the proverbial pot, at least we are listening.