Punch Bowl Social has always been a casual spot for hanging out with friends during the week or partying on the weekend. But now the bar and restaurant’s South Broadway location is upping the ante with futuristic technology. With eight bowling lanes, darts, ping-pong, karaoke, a shuffleboard, a photo booth, giant scrabble and irresistible fruity punch drinks to indulge on, Punch Bowl is never a boring place, but they’re still changing it up with a brand new, virtual reality gaming parlor.

If you don’t know what virtual reality (VR) games are — think of playing Wii Tennis, but actually feeling like you’re on the tennis court. With the help of a specialized headset, the player will be able to fully immersed in the game itself and get a 360-degree view of the virtual world.

At Punch Bowl, up to eight guests can rent out the VR parlor, and play any of the 10 games available (one player at a time). And the games are very diverse—players can slice fruit, shoot a bow and arrow and fight zombies among other things.

According to Bryan Rose, Activities Host at Punch Bowl, the VR games are meant to keep you on your toes — and if you play for a while, it can be a real workout.

“We’ve got two archery games where the control is in conjunction to simulate pulling back on a bow. We’ve got one called Audio Shield, which is kind of a combination between boxing and Guitar Hero. You pick a song and you’ve got a blue shield and orange shield. The notes come flying at you and you have to match the shields with the notes and play a song. It’s a lot of movement involved and being aware of what’s going on,” Rose said.

But how is putting on a headset and blocking out the real world considered social? Well, Rose believes that despite first impressions, this type of gaming is healthier and gets players to engage physically. It’s also a fun group activity even if you’re just watching. 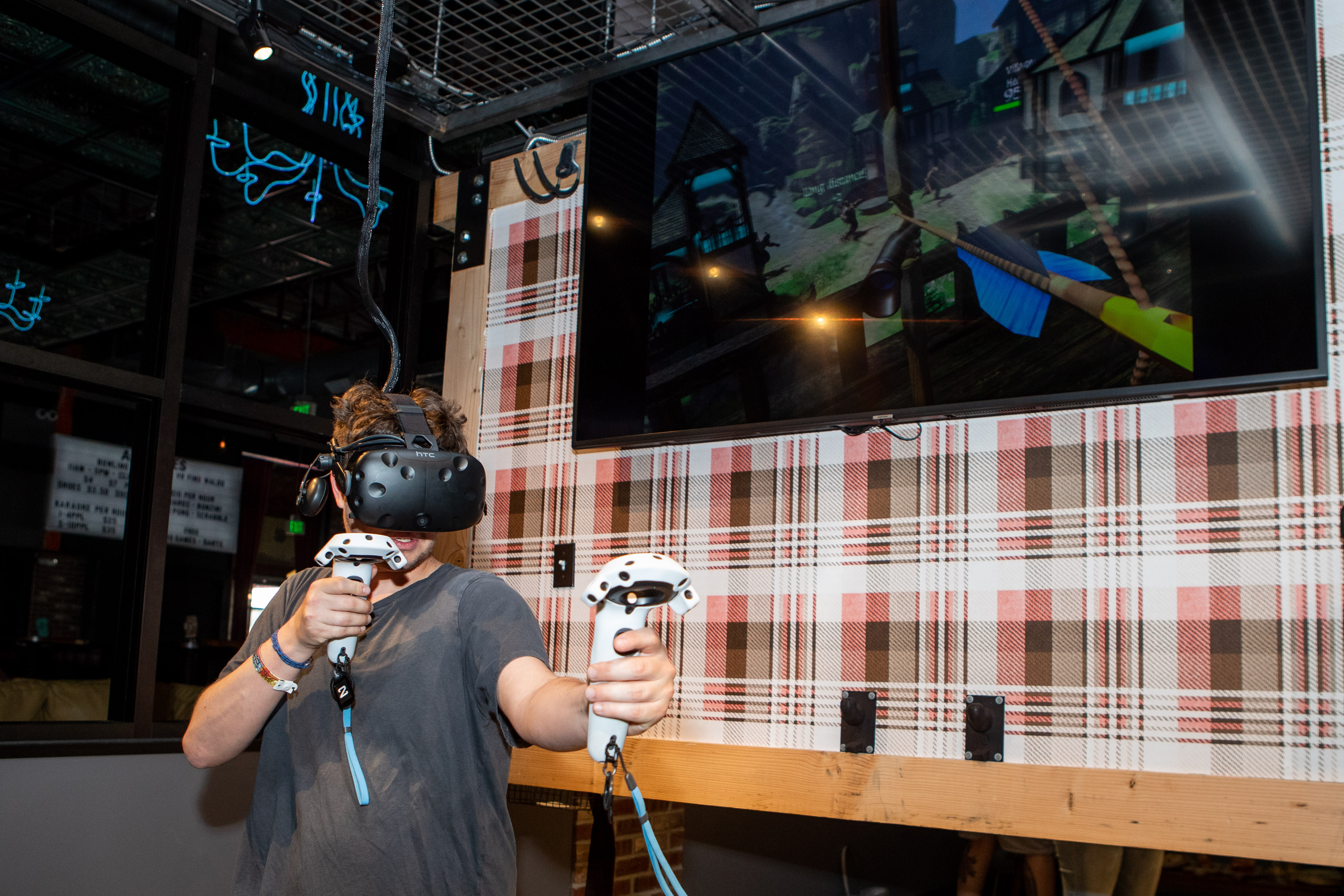 Shooting a bow and arrow during a virtual reality game. Photo by Kyle Cooper.

“I was a little nervous at first because you isolate yourself in the headset, but putting it [the game] up on the big screen makes it an experience for everybody. People walking by will watch and everyone in your group can sit on the couch and watch. I can see it becoming the future for shared experiences,” Rose said.

After watching people chop invisible fruit and attempt to slay invisible zombies, we have to agree that the experience is worth a go if you’re not afraid of being the center of attention. You’ll never want another video game experience again.