–
Colorado has a lot to brag about when it comes to National Parks. And this weekend, limited edition prints depicting those parks and others from all over the country will pop up at Topo Designs in Denver, Boulder and Fort Collins. The prints are part of a poster series titled Fifty-Nine Parks. Produced by The National Poster Retrospecticus, this event has traveled many places before coming to Denver, including destinations like Disney Animation Studios, Facebook HQ, SXSW and Adobe Max.

The posters are designed by various artists, each with a style of their own while still remaining true to the spirit of the parks. Even though the styles can be differentiated, there’s an element of awe in each one, and it makes the series both breathtaking to see altogether and goosebump-inducing — at least for nature lovers.

Local apparel and gear company Topo Designs snagged three days of pop-up shows on the national tour for Colorado. JP Boneyard, the creative director of Fifty-Nine Parks commented, “we’re excited to team up with our friends at Topo Designs and visit the National Parks in Colorado. This trip is one of the highlights of our summer!”As an apparel and gear company, Topo Designs thrives on appealing to people who love mountain living and traveling — an audience that obviously shares a mutual appreciation for National Parks. So this weekend, starting on Friday in Denver, Topo Designs will serve as a fitting backdrop for the Fifty-Nine Parks pop-up show.
– 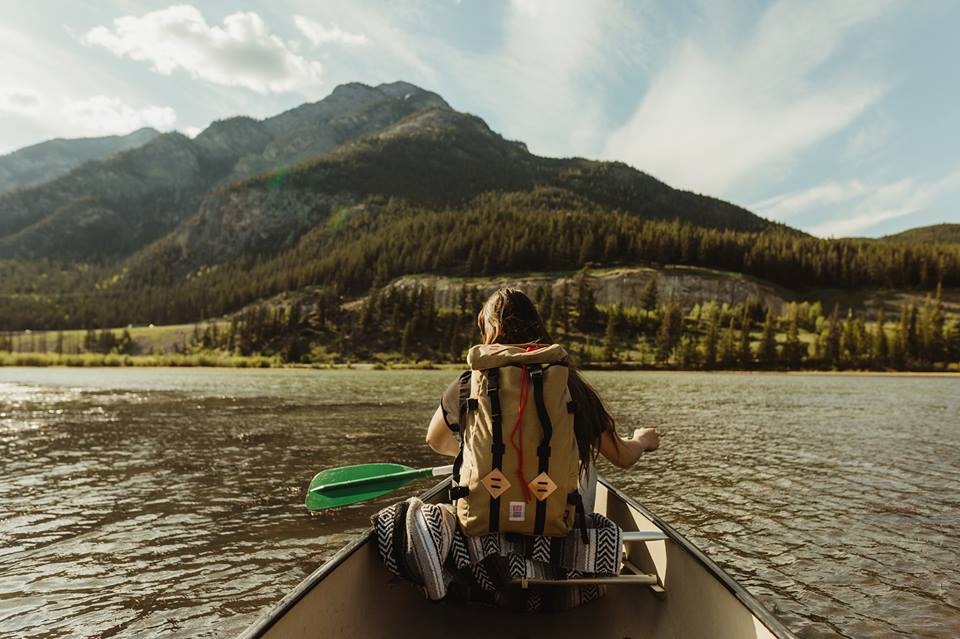 –
Though an article detailing all fifty-nine artists and parks would be exhaustive, we’ve decided to highlight the three artists who represented Colorado’s national parks in the poster series as well as a Denver artist who created a poster for an out-of-state park. As with all the other posters, the following are screenprints — which is a printing technique using a mesh screen to push ink onto paper. Screenprinters work in layers of color and design, so in the descriptions below the number of colors indicate the number of pressings. Though none of the artists representing Colorado are from Colorado themselves, after seeing their representations of our parks, we’d invite them back at any point.
– 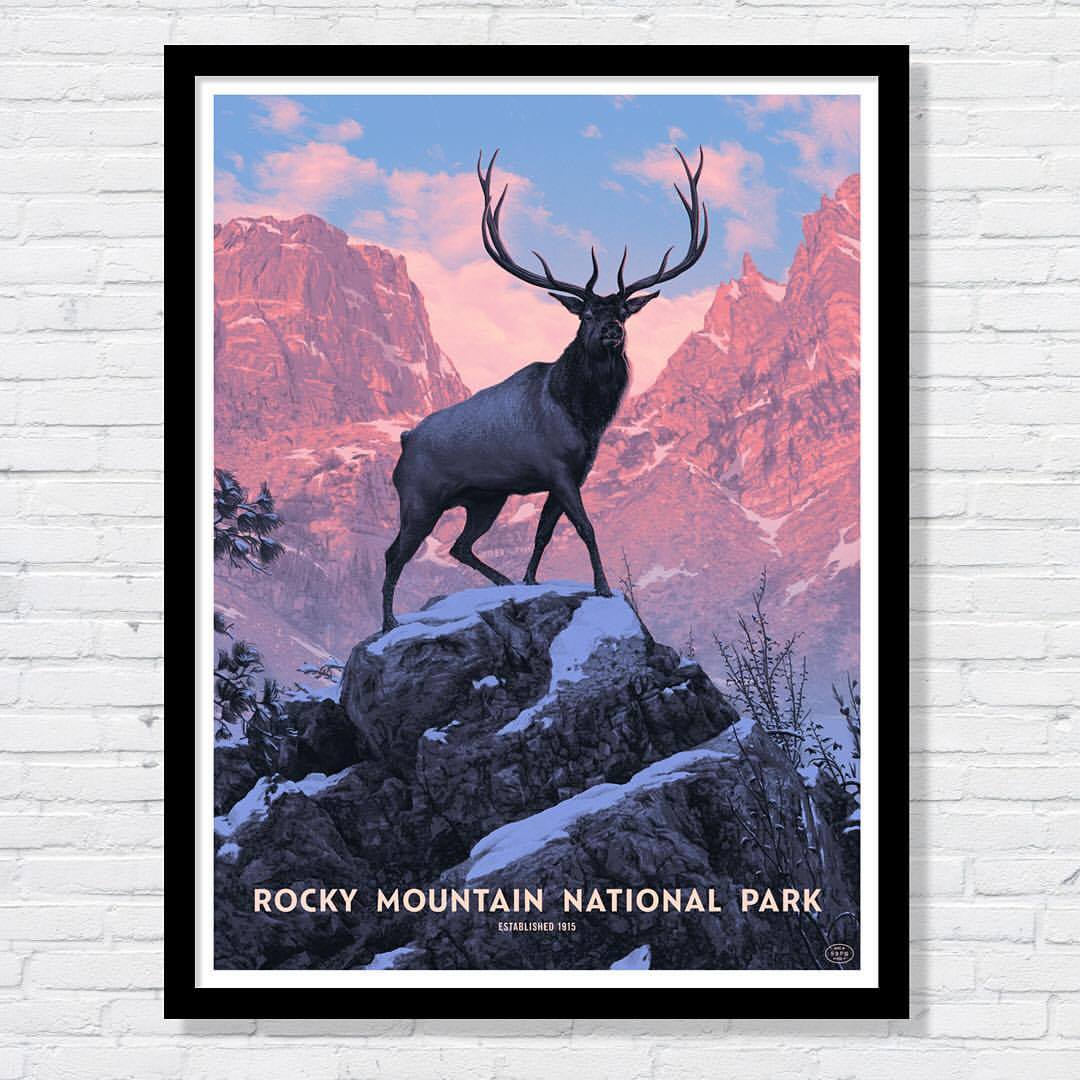 Starting at the one closest to home, Rocky Mountain National Park’s artist is Rory Kurtz. With eight color screens, this poster emulates the Colorado sky at its finest. Kurtz lives near Lake Michigan and it is perhaps due to his Midwestern lifestyle that his portrayal of the mountainous park is grandiose. But we wouldn’t want it any other way — after all, 4.4 million people visited the park last year alone. The stoic elk in the foreground is a nice touch, but it’s the pink dusting on the mountains (endearingly called “alpenglow”) from the sunset that really melts our hearts.
– 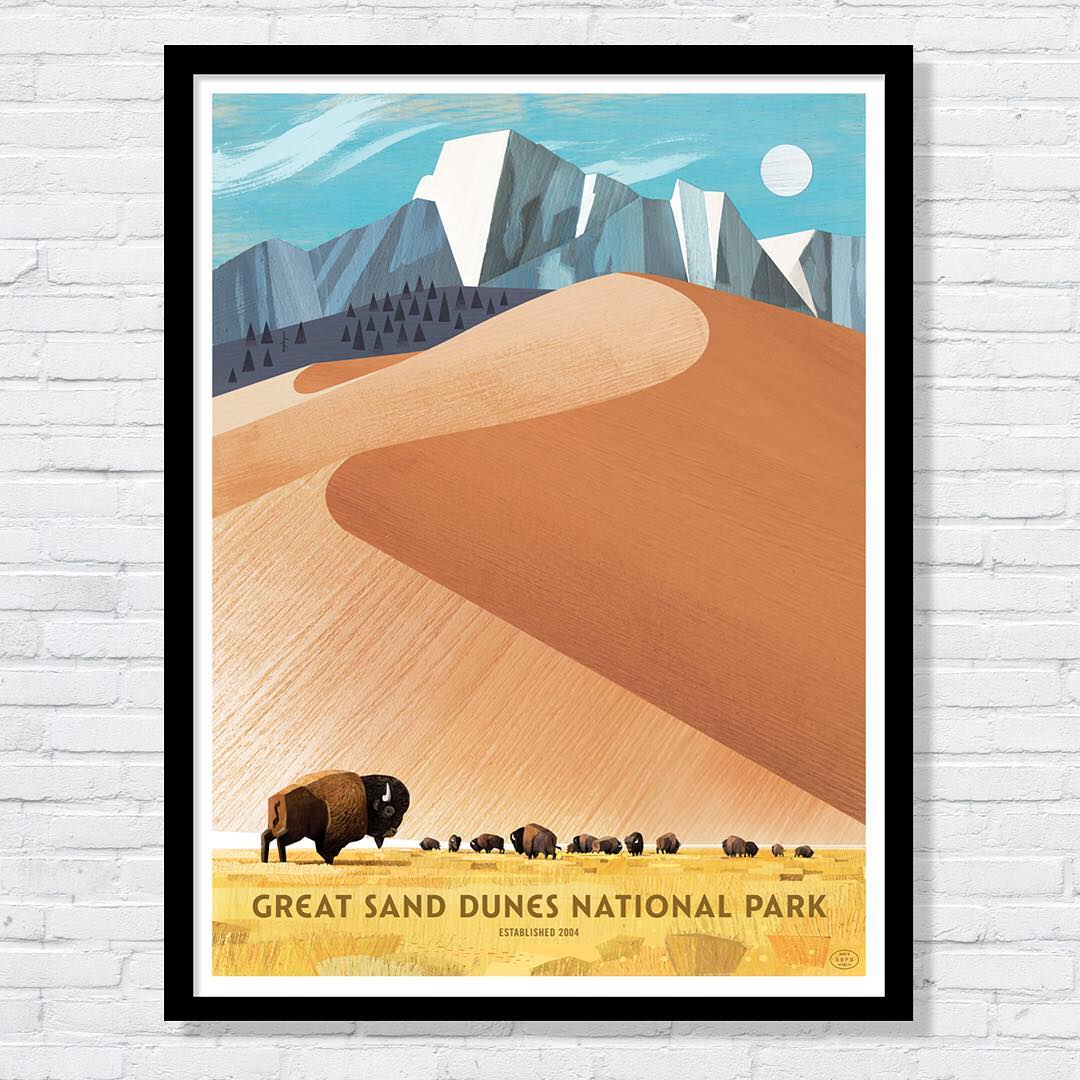 Jeremy Spears splits his creative time between his position at Walt Disney Animation Studios as a story artist and his passion for woodworking, carving and illustrating. His mixed talents provided a rich and satisfying design for The Great Sand Dunes National Park poster, which he constructed quite differently than other artists. About the process, Spears explained “I carved and painted all the pieces to this poster by hand. I then lit and photographed all the elements and composed the whole thing in Photoshop. The herd of bison was actually built off of one bison carving I did. The bison head and body were separate, so I could photograph each from different angles and lighting situations.” The Great Sand Dunes are the tallest dunes in North America and have always served an important function to the surrounding ecosystem and people. The bison represented in Spears’ poster depicts a historical period for the park before even the first nomadic hunters entered the area.
– 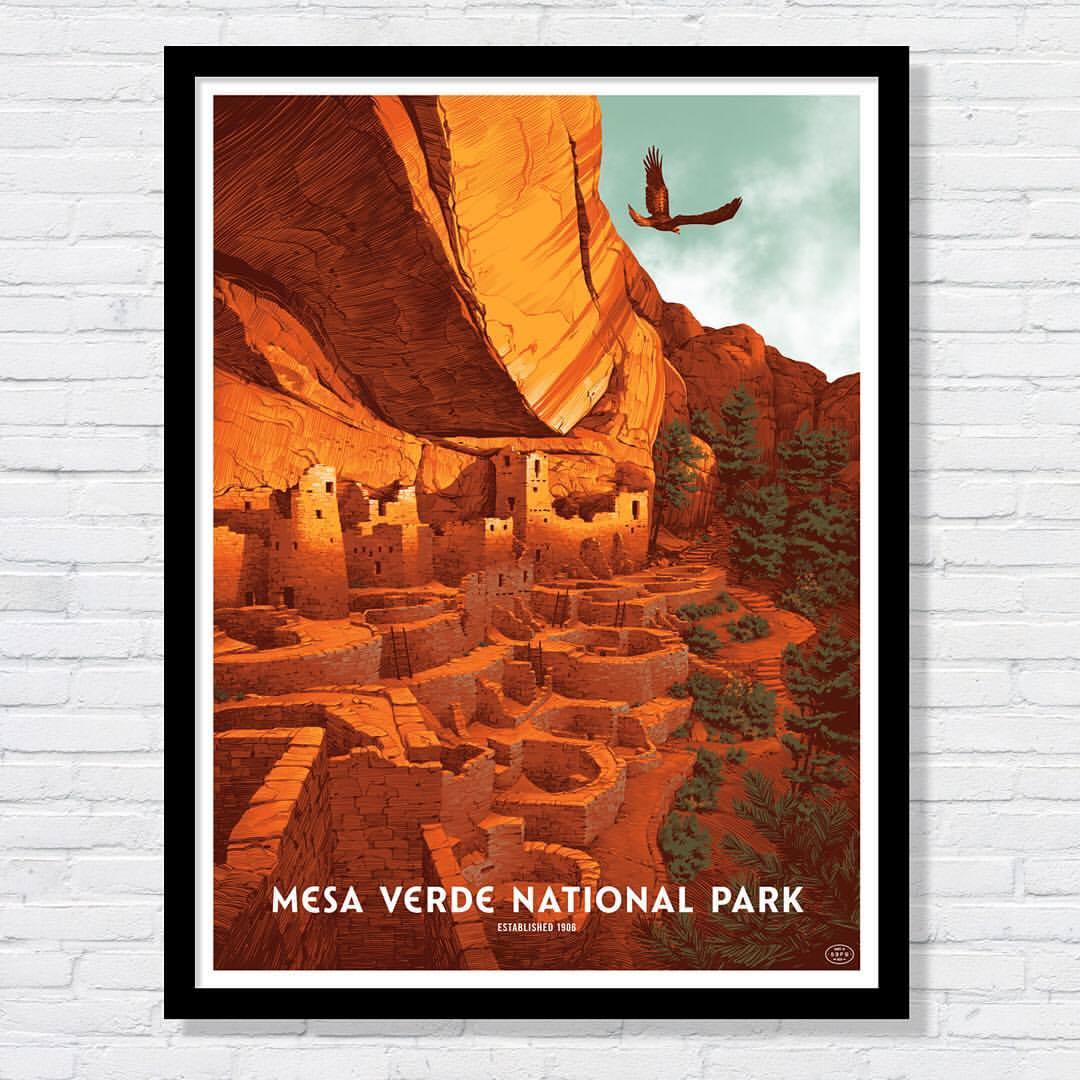 Los Angeles-based artist Claire Hummel captured a gorgeous sight for Mesa Verde National Park with her six colored screen print. Even without knowing that Hummel spends a great deal of time outdoors, it is quite obvious she understands how the lighting in canyons works. And if you’ve ever had the pleasure to visit any of the canyons in southern and western Colorado or almost anywhere in Utah, you know what we mean. On her website, Hummel writes about spending any of her free time in National and State parks, as well as drawing dinosaurs, cowboys, rocks and historical fashion. Her portrayal of Mesa Verde does not rely on nostalgia — instead, she showcases the natural beauty of the place as it is now. 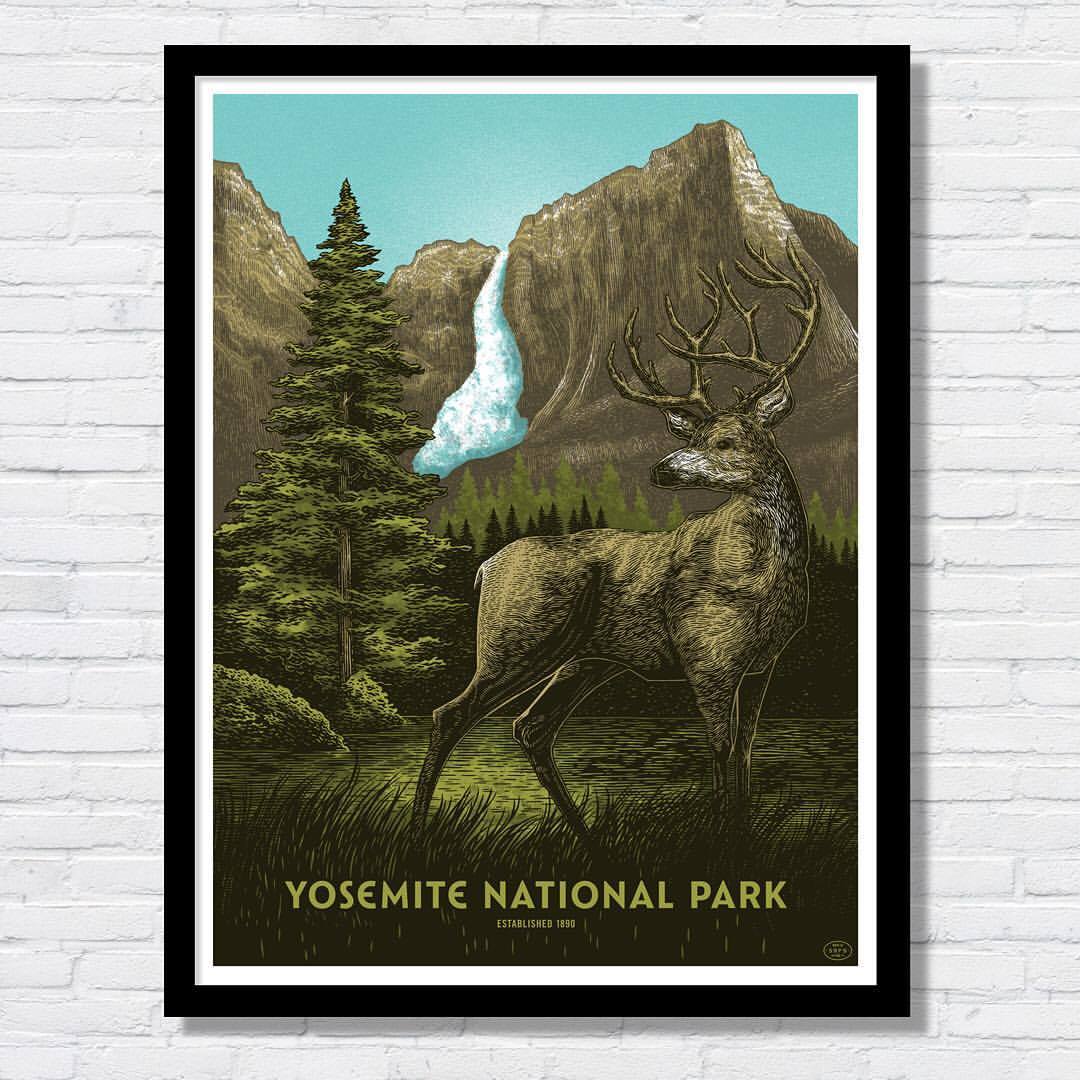 Denver’s very own John Vogl created a detailed poster for California’s Yosemite National Park. Vogl’s signature style — which he sharpened while making a name for himself creating concert posters — uses bold swathes of color with intricate linework to convey whimsical images typically inspired by nature. This poster is no different, and there’s a great timelapse of how Vogl layered this screen print, here. Yosemite is one of the most sought-after destinations for serious rock climbers, with El Capitan and Half Dome looming in the middle of trees and fields — a point Vogl made sure to include.

Fifty-Nine Parks will stop by Topo Designs in Denver at 2500 Larimer Street, #102 on Friday, June 8 from 3 to 8 p.m., before traveling to Boulder’s Topo Design on Saturday, June 9 and Fort Collins’ Topo Designs on Sunday, June 10.
–

All photos courtesy of Fifty-Nine Parks, unless otherwise stated.
–