This June, Middleman, an elegant neighborhood bar, will open its wooden doors on East Colfax, where character and flare are prevalent and late-night concertgoers can be seen roaming the sidewalks nearly every evening.

Inside, quality cocktails and bar bites inspired by the flavors of New Mexico are crafted to order. And the fare isn’t the only thing that’s handmade at Colfax’s newest bar. Everything from the wooden tables that adorn the built-in booths to the bartop that thirsty locals will lean upon has been handcrafted by owner, manager and bartender Jareb Parker. 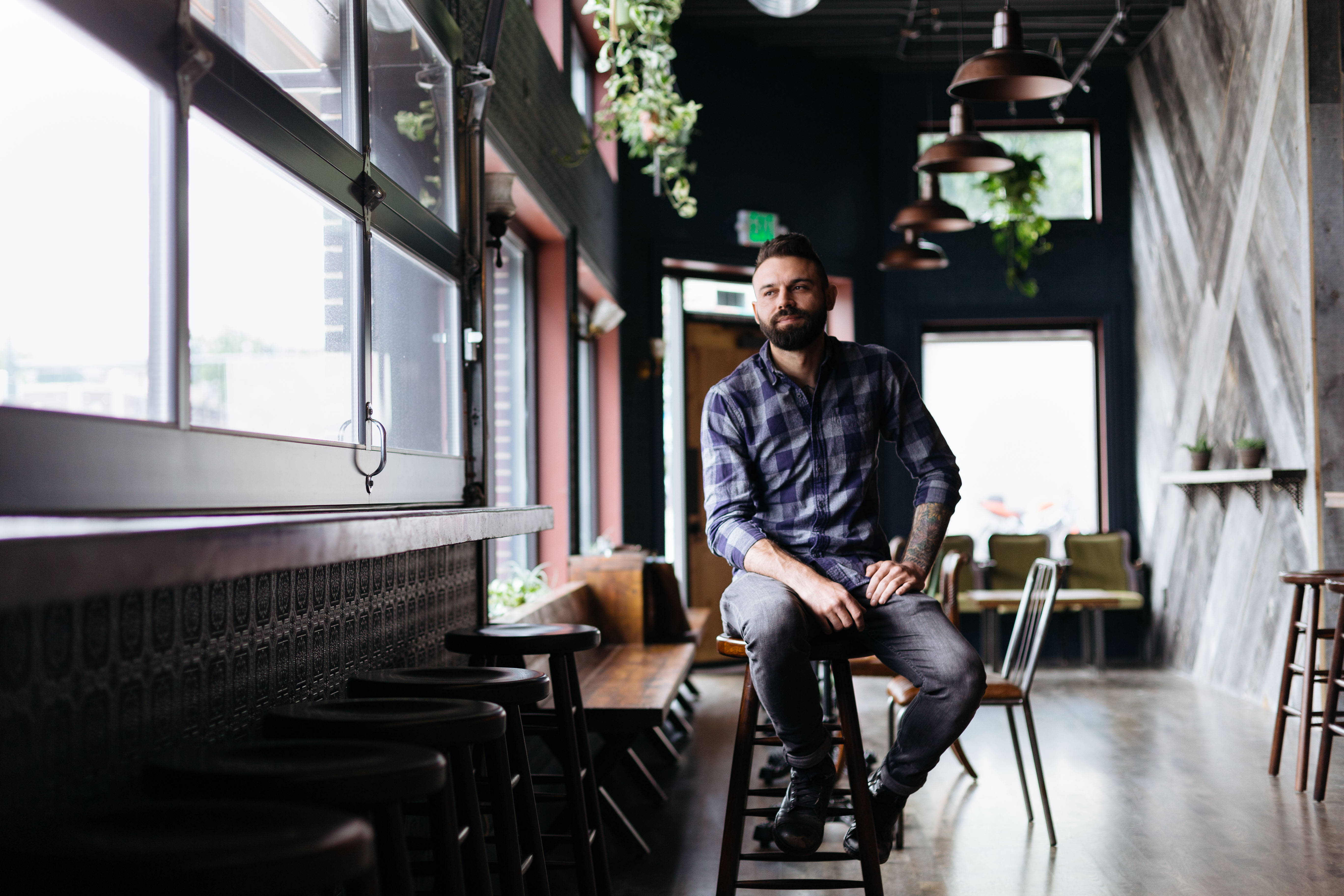 “Construction probably took a year. It was a full rebuild,” explained Parker. “I designed the space and built it myself. I’m a carpenter. Everything is new. I built the entire bar, all the shelves, wallpaper, the back bar, all the trim on the windows, all the tables, stuff like that. This wood needed months worth of work. It took me about two months just to do the woodwork for the bartop tables.”

The space, once an abandoned building, is thin and full of natural light. The dark wood, stained by Parker, gives it a warm and antique feel while the abstract artwork and clean lines bring in a touch of modern. And the bartop, along with pretty much everything else in this handcrafted haven, was reclaimed from obscure locations like boxcar floors and semi-truck beds. The hand-carved detail in each piece of furniture to the intricacy of the artwork on the back wall would almost lead one to believe this space to be a pretentious cocktail lounge, but the food and drinks coming out of Middleman are anything but. From burgers topped with traditional Hatch green chile to a simple old-fashioned and a few unassuming house cocktails, the family behind this neighborhood bar is marrying quality and casual.

Middleman is a family-owned operation. With Parker’s brother as the executive chef and his cousin as a co-owner, they were able to combine their desire to own a neighborhood bar with their New Mexican heritage and Parker’s bartending experience. And if you’re wondering what New Mexican-inspired cuisine entails, it’s essentially “Mexican with less cheese and more flavor,” according to Parker. As far as the drinks go, they constructed a menu with five classics and five signature cocktails — a lineup that Parker reached out to Denver bar Fort Greene to construct.

“We’re doing five classics on our menu and five originals and Lawrence at Fort Greene is helping me out with that. He’s a bartender at Fort Greene. He’s kind of a genius with it,” explained Parker.

With help from local bartenders and his family, Parker has built (literally) something that not only brings an authentic craft to Colfax but also quality, consistency and comfort. And in addition to the approachable drinks, deep-rooted dishes and warm atmosphere, this space will feature live music — something that is not new, but always welcome in Denver.

“We didn’t really spare an expense on our sound system,” stated Parker. “I have the two decks for DJs, you know, so someone doesn’t have to take other equipment in here. You can just come in with your records, plug in and start playing. I did the same with the band … ideally, any band can come in here with their instruments and start playing.”

Middleman, 3401 East Colfax, is set to open in mid-June, though the team has not announced an exact date. Once it opens its doors you can stop by anytime between the hours of 4 p.m. and 2 a.m., daily.