Library branches influenced by a Chicago Public Library program — which helped Chance the Rapper, among other artists make it big — now have similar programs in Denver suburbs. The Studio at Anythink is offering a series of digital media classes to the community for free. Courses include audio, video and graphic design production. There’s also one strictly dedicated to YouTube channel management.

Nicole Moore is editing video footage from Anythink Libraries’ mothership — The Studio in the Thorton branch. The Studio at Anythink’s Wright Farm location has partnered with Denver Open Media, a non-profit assisted by Denver Media Foundation for the recurring Video Production class. She’s been taking these classes for several weeks now in order to learn the ropes.

Moore is a clinical social worker and a doctoral student in Denver. However, she wants to make a documentary on gentrification and how it affects LGBT youth. Although Moore has been awarded a partial scholarship for Denver Public Media, it doesn’t cover access to the equipment she needs. She also needs further training with the industry-standard recording equipment and editing software. 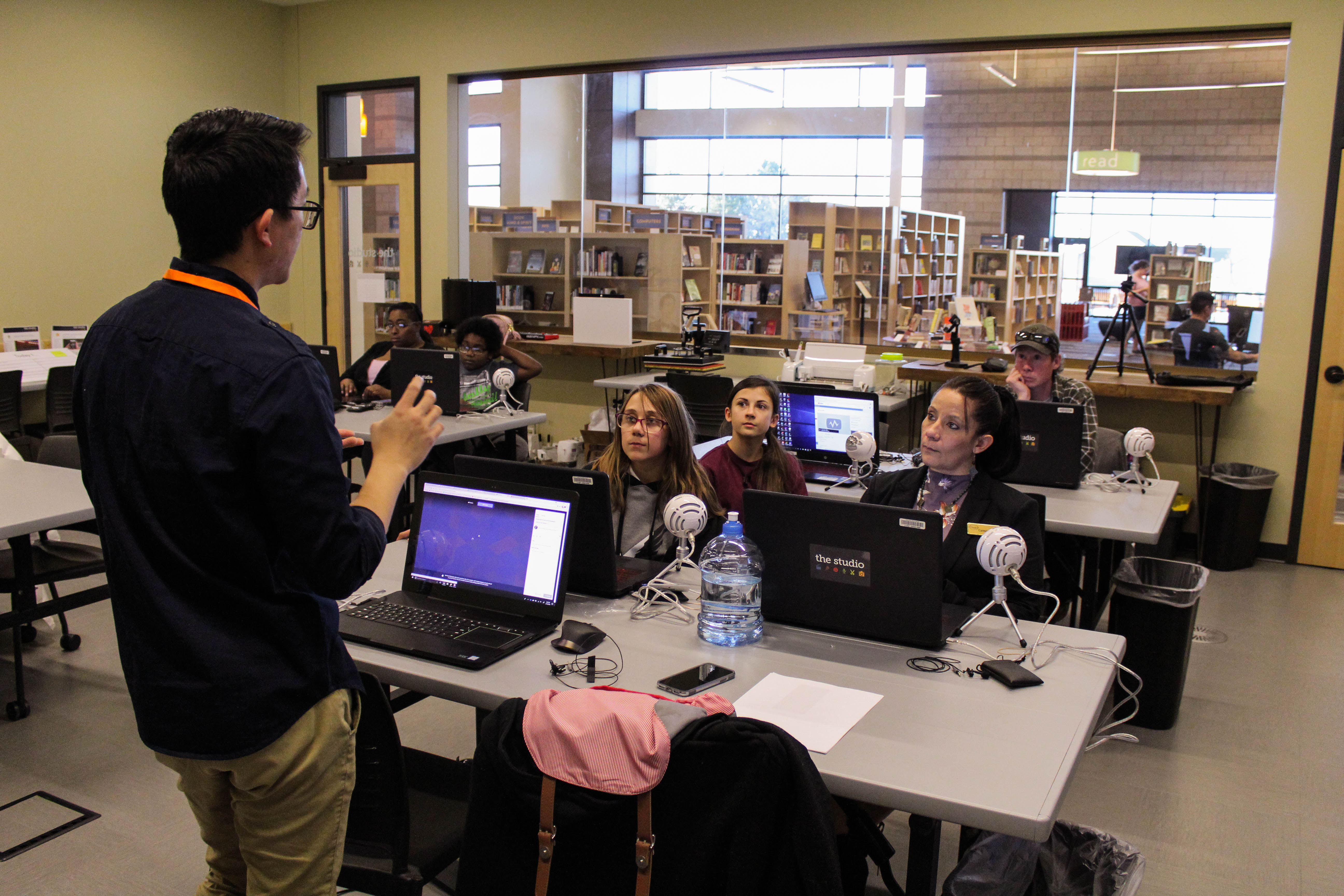 “At Anythink I can sort of supplement half off for their classes,” Moore said. “I can come and take these [classes] up here for free and then still have access to the other ones at Denver Open Media. Sometimes I’m the only who shows up and it’s almost like private tutoring.”

John Aden is the Media Education Coordinator at Open Media Foundation in Denver. He teaches a video production class at The Studio through the partnership Anythink has with Denver Open Media. For the past two months, he’s been leading classes at The Studio.

“What good is all of this technology if you don’t know how to use it?” questioned Aden. “How [do we] navigate it? How [do we] use it responsibly to deliver the message you want to deliver?”

In this particular class, Aden shows Moore and the other students the ins-and-outs of documentary style editing using Adobe Premiere Pro. He shows the students how to add music beds, dim lighting and blur their subject’s faces. Those are only a few of the tricks he goes over with the class.

“It’s always encouraging to demonstrate and then actually see people apply what they’ve learned,” he said. “I really like learning environments like the ones they have here at The Studio because the students are actually participating in the learning process. The hands-on component is really essential for people to learn and to pick up these kinds of skills.”

Moore said the access Anythink is providing sends the message that people from all backgrounds have a chance to learn the skills needed to get ahead in these industries. “I’ve been able to obtain a higher education after being a high school drop out to getting my GED but now I’m a doctoral student and education is huge. When you come across populations that don’t have that same access, being able to provide it for free in their community within walking distance is gold.”

Mo Yang is Studio Coordinator for Anythink. He said technology-based programs like The Studio are demonstrating how libraries can adapt to fulfill the community’s needs. “What [The Studio] does is it puts interest-driven, informational learning into action. We partner with what we call artists-in-residence who have a career experience so that we can first teach the skill sets required but also be a resource. People interested in taking their passions further would understand the various pathways that they can take in their interests.”

Equipped with computers, cameras, microphones and a whole stage — including a guitar ready for anyone to play — The Studio is redefining what libraries mean to Colorado. Ultimately, Anythink is a place for people with similar interests to form support systems that last. So that when one person makes it big, like Chance the Rapper did in Chicago, the assembly line will follow. All you need is a library card.

All photos courtesy of Anythink Libraries