Brooklyn duo Matt & Kim will return to Denver for their first headlining tour in three years on March 29, 2018. This news comes not long after the announcement of their new record, Almost Everyday which offers a stacked lineup of guest vocalists. Some of the features include Santigold, Flosstradamus, Kevin Morby, Kevin Ray of Walk the Moon, HXLT, Travis Hayley of Night Riots and more. We talked with Matt Johnson of Matt & Kim about the new album and their upcoming Denver show.

303: You have a new album coming out with a lot of features. How did that come to happen?

Matt Johnson: I, like many singers, have mixed feelings about [my voice]. I have a polarizing voice. It’s good for the band in the sense that people know our songs when they come on. But also, I think people are like, “Oh my God… this is the singer of a band?” [laughs]. But I think with everyone singing along it’s a cool vibe. So we wanted to add that into some of the songs and then we thought, “you know what would be fun? — getting some of our friends who also make music to be those other voices on the songs.” There’s so little collaboration and stuff in alternative music, especially when you compare it to pop music or EDM or whatever. It ended up being really fun — to have these recognizable voices of bands that I was a big fan of on songs that we had written, whether it’s Mark Hoppus or Tokyo Police Club or Santigold — these very distinct voices of music that I listen to all the time. It’s like, “wow, they’re singing one of our songs” [laughs].

303: It’s just a great range, so I’m really interested to see how this is going to pan out with your new album.

MJ: This is album number six for us. There is something about it as an album. We have things like a fully a cappella song on the album and someone might hear that and be like “what are they doing?” but I think it’s one of the coolest songs we did. It just feels great as an album from beginning to end. I know we’re moving into this world where people say the album’s dead and it’s just a singles world and people listen to songs on shuffle and stuff like that. But to me some of my favorite musical listening experiences are albums I love from the first song to the last song. Like Weezer’s Blue Album since I was 12 years old. That 10-song album that I love from beginning to end actually set up what we’ve done — almost every one of our albums is 10 songs.

303: Why the title Almost Everyday?

MJ: There were a couple of things. Musically, it’s still a very upbeat album. There are some darker undertones lyrically. It was a hard recovery year for Kim and obviously, there’s a lot of bad shit happening in the world. One of the “Almost Everyday” things was about sharing some bad news almost every day. It was like “I can’t believe this…” again and again and again. It’s weird, though — I think for so many years musicians have written as a therapeutic process to get stuff off their chest and understand things. But that wasn’t really what Kim and I did. This was the first time we did it and we felt better about that stuff. I finally understood that. 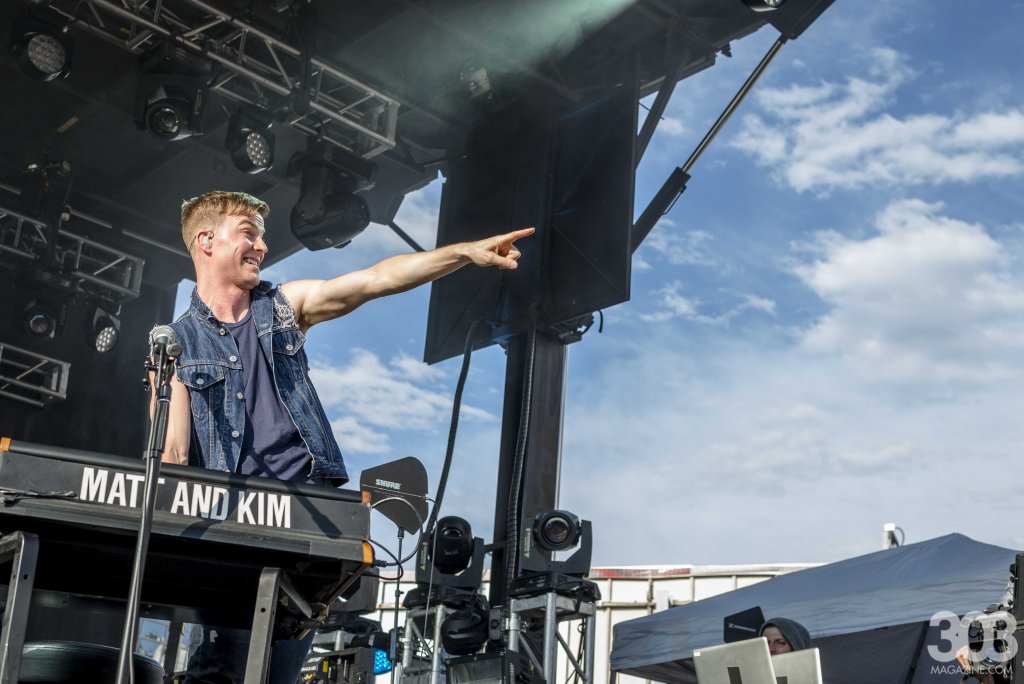 303: Do you have any crazy Denver stories before you return to the Mile High City?

MJ: I remember one of our early shows, there was a venue in Denver called Rhinoceropolis. Does it still exist?

303: It actually closed last year. It was a DIY venue and it got shut down.

MJ: We played there a number of times in the beginning of the band. It was a great place. I remember finishing a show at Rhinoceropolis and it was late. We had a show the next day and we decided we were going to try to make the drive yet a blizzard had begun and as we started going in our — at the time — minivan. We started going up into some mountain range and were swerving back and forth and we ended up having to pull over on the side of the road and sleep in the van. I was pretty sure we were going to freeze to death. But it’s funny — we made it out okay but it’s crazy that when all is said and done and you have lots of great memories from the road, the ones that were not great in the moment are going to be the ones that stick with you.

Funny enough, I have another memory which was before Matt & Kim and I was on tour with my brother’s band and we were driving to Denver. First off, we were in a little Honda Civic that my grandmother gave me. And later on we would do the Honda Civic Tour which was with My Chemical Romance and blink-182 and I was like, “This isn’t the Honda Civic Tour. The Honda Civic Tour was when we were touring in a Honda Civic” [laughs] It was bizarrely the hottest I’ve ever been in a car and we had the windows down. We had no AC — the AC didn’t work — and I thought I was going to burn to death and I didn’t think that was going to happen outside Denver, Colorado. How was the hottest and the coldest moments of my life both in the same place? That doesn’t make any sense. That night we didn’t have anywhere to stay and we were really broke and we literally saw someone on their front porch and we asked them if we could camp in their backyard. And they let us do it — even though they had a child! [laughs] Maybe this just goes for how nice people are but here are three 19-year-olds from wherever and they let us camp in their backyard. What the hell — who would do that now?!

Matt & Kim will play at the Ogden Theatre on March 29 with CRUISR and TWINKIDS. Tickets are available here. Matt & Kim will also play Velorama in August. This interview has been edited and condensed for length and clarity purposes.