Duane Topping, of Topping Designs, has participated in Denver Fashion Week (DFW) for the last three seasons and has been part of major events, such as New York Fashion Week, LA Fashion Week and Baltimore Fashion Week. Topping, who has occasionally been mistaken for a bouncer or “lost husband” rather than a designer, brings his hardcore rock style to what he creates. The result is show after show of models slaying the runway in sleek, elegant looks with an edge.

Topping’s career in fashion started when he retired from the military in 2012. He was having a hard time returning to civilian life from the combat life he’d known for so long. “I didn’t do very well for a number of years. Being an artist, I’ve always loved fashion,” said Topping. “I told my wife one day that I need to redirect this energy. I’m going to teach myself to sew.” As part of his new hobby, Topping started fabricating designs for his wife, Jamie. One of those designs ended up being an ensemble Jamie sewed and wore to DFW Fall ’16. The dress drew a crowd and captivated attendees. According to Topping, this moment was the fuel added to the fire for his love of fashion and the beginning of Topping Designs. 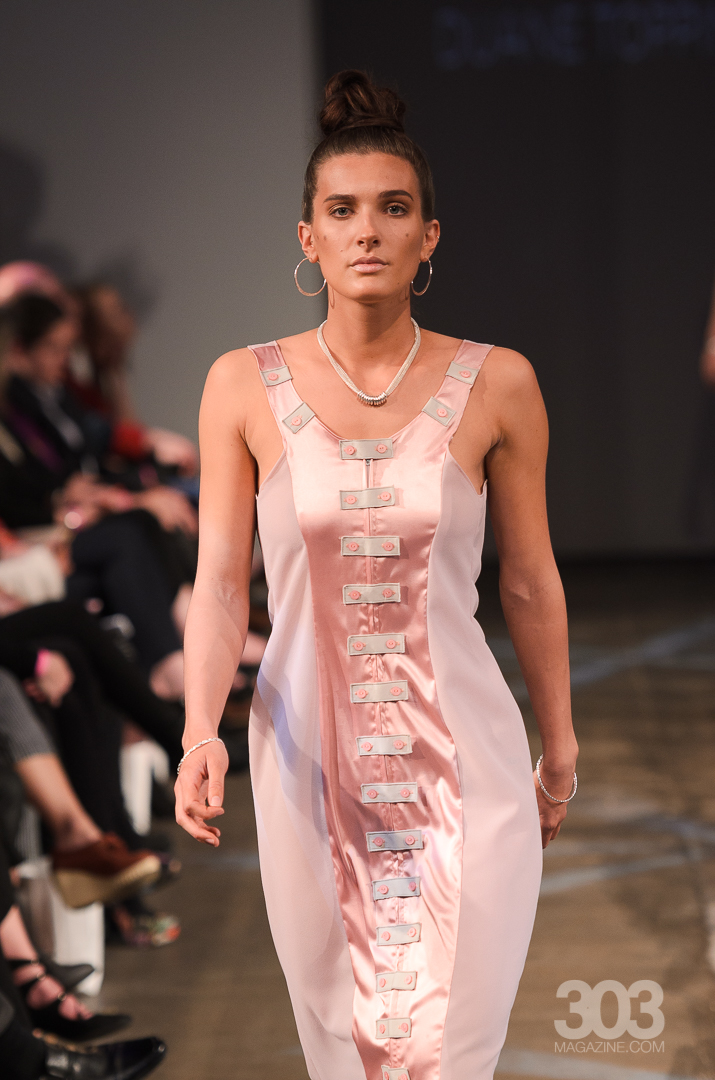 In addition to being passionate about fashion, Topping is a passionate advocate for femininity in its many forms, so he encourages women to tell their own personal stories through his designs. With that in mind, he designed his upcoming runway show for DFW’s Non-Traditional Night to allow the models to share their journeys with the crowd. The show will include models who identify as transgender. Each model is a Colorado transplant who has been known only as female since her move, so Topping’s runway show will be the first time each woman comes out publicly as transgender. “For us, the traditional notion of alternative isn’t plus size, petite or older models. That is our normal,” he explained. “Not only do transgender models fall outside the hegemonic standard model, they are something different for us.” Topping’s runway looks are inspired by Old Hollywood glamour and channel the style of actresses like Jean Harlow and Rita Hayworth. His goal is to provide a platform for his models, so the audience can see how intrinsically beautiful they all are and leave the event with a different perspective about labels and what we view as traditional.

Without models, Topping believes his clothes cannot come to life, and they can’t tell a story — their story. “For us, we like to think of our garments bringing out [someone’s] personality,” he explained. He also revealed that in the fashion industry, models can be seen as just hangers for a designer’s clothing. Because of this, Topping goes to great lengths to avoid belittling them. Instead, he chooses to make models feel like family and treat them as just as important as his clothes. With this, he wants to express the importance of models this season and show his viewers that without the models, the clothes have no life and no story.

So, what can the audience and readers expect to see this season from Topping Designs? “Expect a show. Expect to be excited,” said Topping. “Expect that your perspective will be turned.”