Virtual Reality (VR) brings to mind headsets and people running into walls or falling over while lost in a technological dimension. But Visionbox Studio in the Art District on Santa Fe is hoping to use VR without headsets to bridge the gap between artists and their audiences with the goal of keeping theater and other cultural pursuits relevant to all age groups. It’s a tactic that’s becoming more popular with theatrical productions nationally, but in Denver, Visionbox Studio leads the way. So far, they have started with a tactic they call immersive projection, though they hope to integrate more technology into their productions as they grow. “The idea is to let artists from all disciplines collaborate in here with VR being the unifying world of the room. It’s an ongoing experiment and a welcoming laboratory for artists in Denver,” explained founder Jennifer McCray Rincón.

“Headsets are not a part of our VR because I think theater is a deeply communal experience, and headsets are a deterrent to that.” 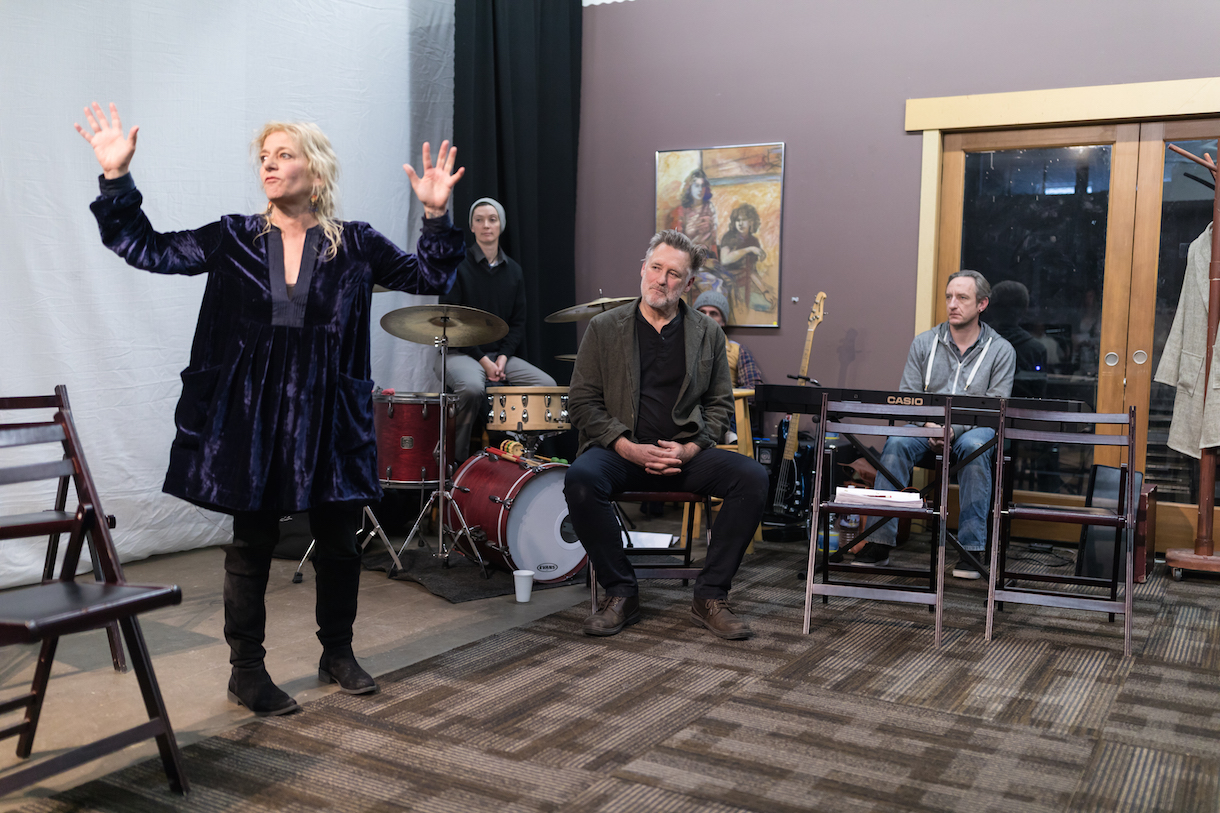 Rincón speaks before a show with Bill Pullman. Photo courtesy of Visionbox Studio

Founded by Rincón seven years ago, Visionbox Studio originated as a professional training program for actors from high school and beyond. These actors are taught in British and American traditional theatre ways, something Rincón learned through her undergraduate and graduate education at Yale University and Yale School of Drama. Rincón came to Denver from New York in 1991 when the Denver Center for Performing Arts (DCPA) recruited her to be the Head of Acting at the National Theatre Conservatory (NTC), a position she held until 2008. Since her move to Denver, Rincón has directed shows for El Centro Su Teatro, Shadow Theatre, the Historic Old Elitches Theatre and was the founding artistic director at the Lizard Head Theatre Company in Telluride.

“My mission, who I am, is to help raise and elevate the level of the performing arts through professional training,” Rincón explained, “Denver is a very young cultural scene but if there is no training there will be no excellence. What I have to offer my community is my education, and the education of an artist is equal if not more important than their talent. Artists are born, but then they get made. If we don’t have structures, mentors to guide them, we will lose the art form.”

Visionbox Studio is her theatrical brain-child, something she is more passionate about than being the director at the NTC. And though she brings a healthy helping of expertise in the training of actors and directing of shows, she admits to knowing next to nothing about the world of VR. What she lacks in that knowledge, she makes up for in her connections with people who do. Enter her VR team, composed of Phillip Baldwin, Simon Lovell, Miguel Trujillo, Dan Koetting and Ryan Shea. Baldwin and Rincón met at Yale Drama School in the ’80s, where Baldwin was making sets in the traditional manner — with physical objects.

“If it’s supposed to be snowing, the walls show flakes falling from ceiling to floor.”

Now, according to Rincón, Baldwin has turned his talents for set design toward the technological realm, creating virtual spaces that can be even more immersive than the elaborate stages that cost many thousands of dollars. With projection, 360-degree cameras, and three-dimensional computer design, Visionbox Studio uses all four walls as the stage with the set projected onto them. With time, money and support, the VR component for Visionbox will have the chance to be more immersive than it stands at the moment. Those well acquainted with the virtual world might consider virtual reality a loose definition for what Visionbox offers, though their application of the technology is what puts them on the cutting edge.

“Headsets are not a part of our VR because I think theater is a deeply communal experience, and headsets are a deterrent to that,” commented Rincón. 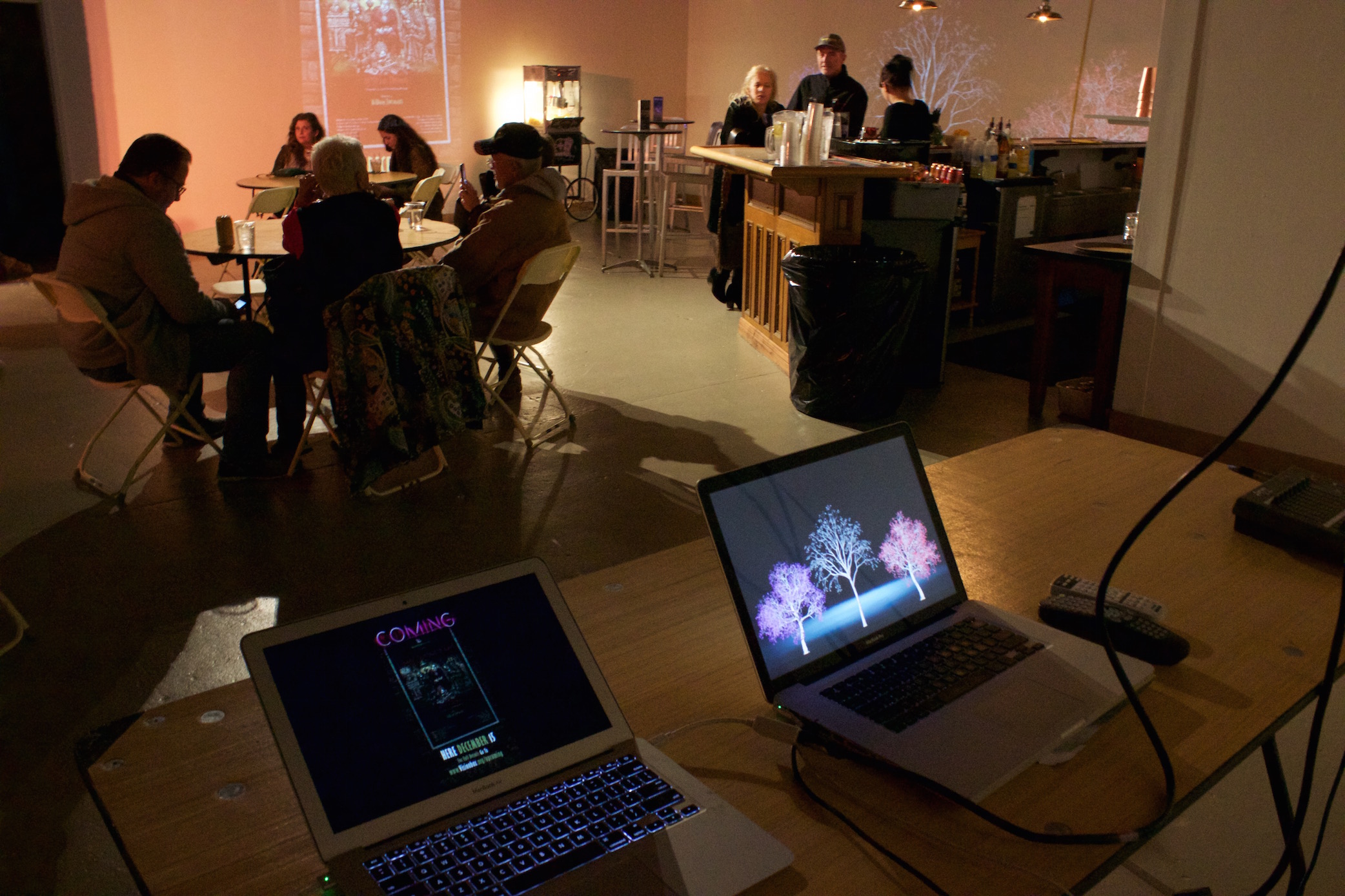 Computers with the VR designs at First Friday. Photo by Cori Anderson

Though Visionbox Studio used to reside on East Colfax, it moved to 910 Arts on Santa Fe a few months ago— a more welcoming area for artistic creativity and exploration. The main technical modality used up to this point has been projection, but moving to 910 Arts has allowed Visionbox to plan for more advanced VR technology. Between the theatrical productions, it’s open on First Fridays with happy hour drink specials and musical performances, like the last one of the year on December 1 where a local musician Willym Brown and “El Javi” played guitar and sang in front of a large crowd of onlookers. Rincón has the connections to bring in some big-ticket names to Visionbox, including Bill Pullman (Spaceballs, Independence Day) and Broadway actor William Youmans (Wicked, Titanic.) Pullman already visited Visionbox earlier this year and will be coming back for a one-man-show about the Western artist Charles Russell in 2018, directed by Rincón at the request of Pullman. Youmans visited Denver on December 15 with the show A Child’s Christmas in Wales. 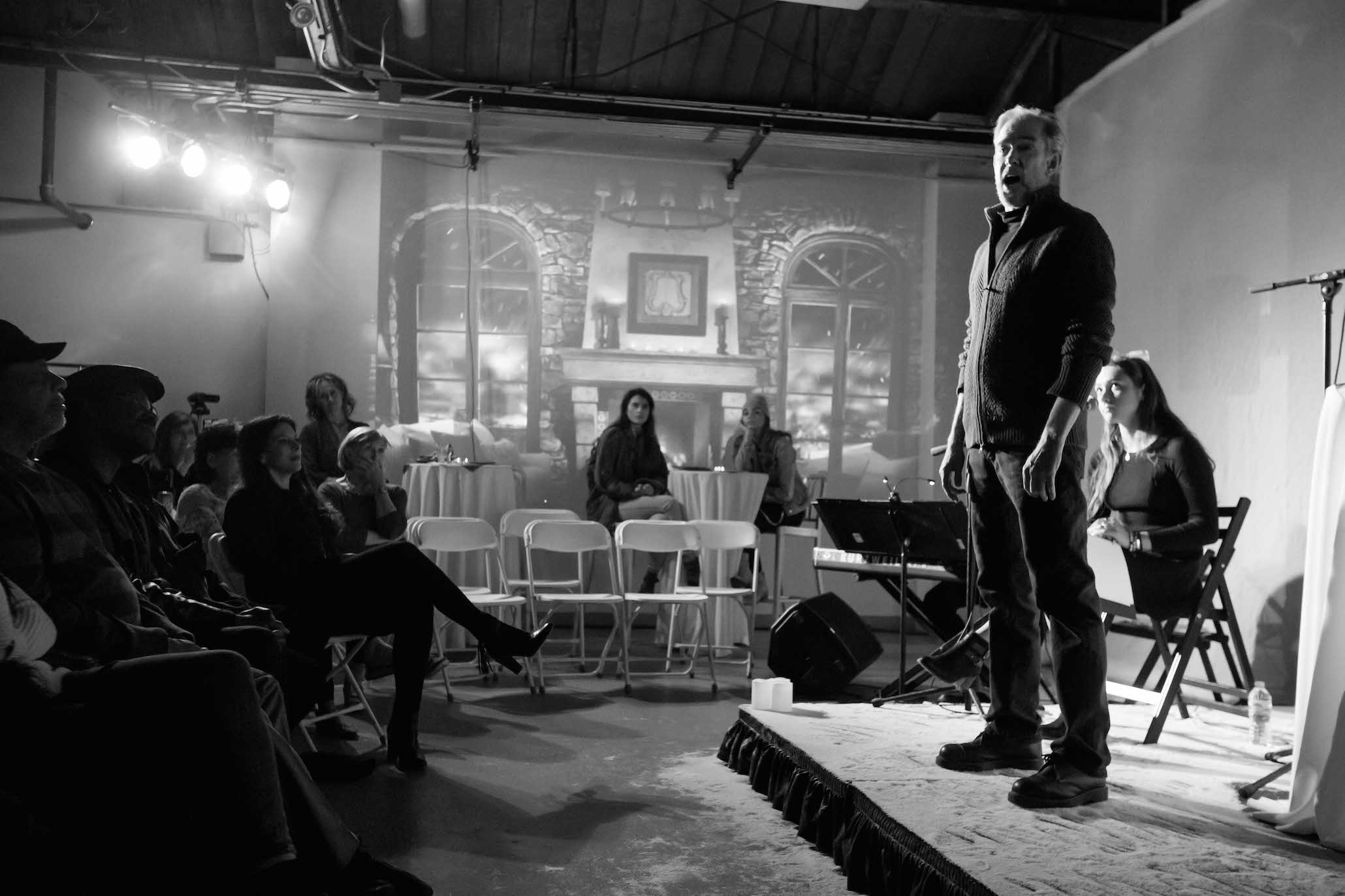 Under the high-tech hopes and well-known actor appearances, Visionbox Studio possesses a deeper desire to bring both classical and contemporary literature of theater to a wider audience. The VR will eventually be an enrichment tool, one that can reveal more about the text than a physical design. If it’s supposed to be snowing, the walls show flakes falling from ceiling to floor. If the scene takes place on a windy bluff, the surroundings appear to be moving in the wind. And if they can fully realize their dreams for three dimensional, almost holographic set design, they will see more age groups coming to see their shows. For now, the VR at Visionbox is still in the very beginning stages and will need a solid amount of development to compete for attention from other technological-cultural hybrids.

“We have this great technology we need to use and advance, but if it’s not combined with the history of our art form and our technique it will be meaningless. It’s like eating a lot of empty calories, it will mean nothing, we will just get fat. We won’t be nourished. We are bringing the highest level of technology to the highest level of directing and acting. It’s not about design for its own sake.” -Rincón

Visionbox Studio is looking forward to an exciting next year of shows and more development in their VR capabilities. Not only will they have performances at their studio on Santa Fe, they are also partnering with the planetarium at the Denver Museum of Nature and Science to explore dome projection and live performance, called the Denver Dome Theatre Project. By combining the modalities of VR and classical theater literature, Visionbox Studio will hopefully entrance more people to a sector of the arts that has always been a commentary on our culture and a place to answer the timeless questions of human existence. 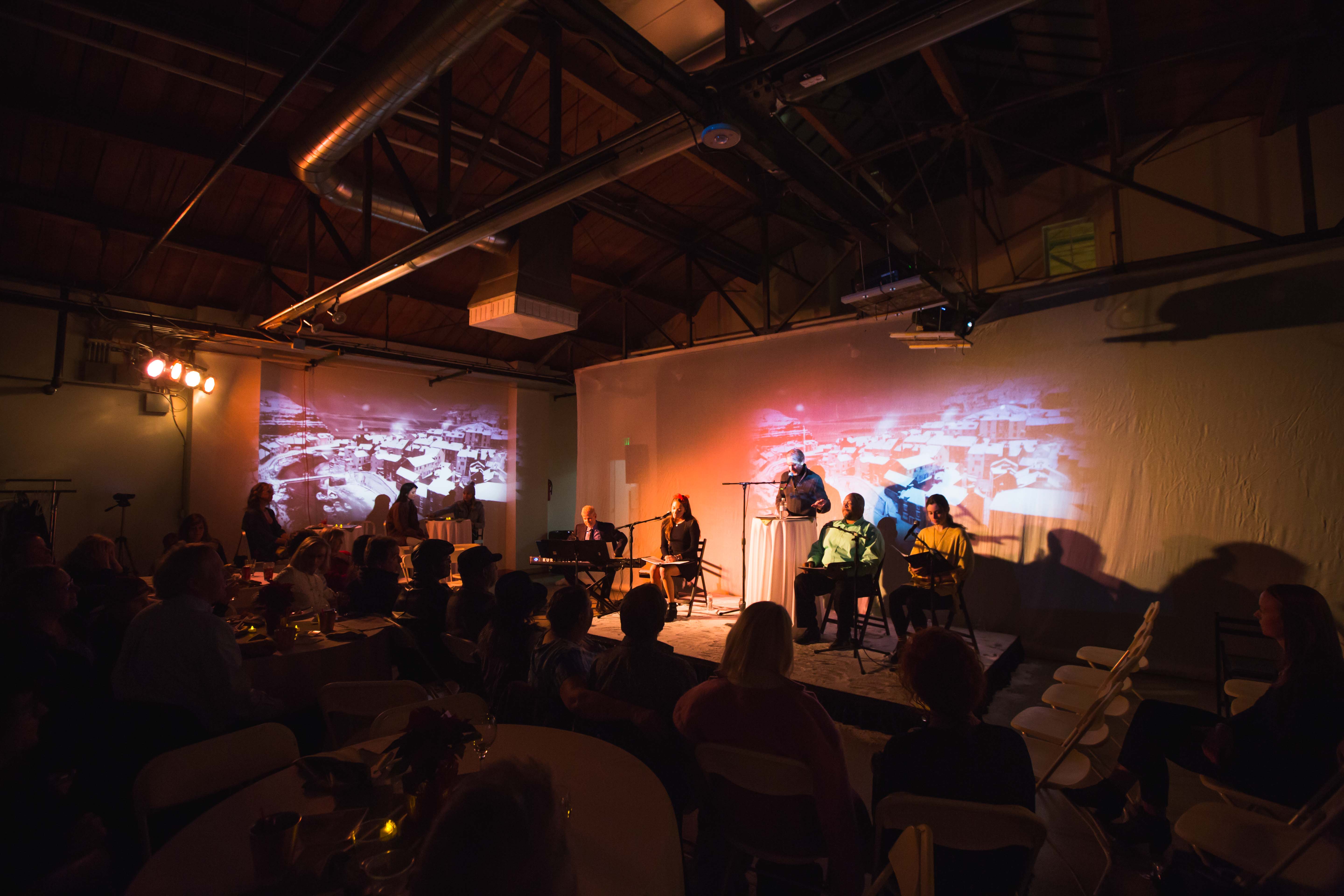