Rosenberg’s Bagel and Delicatessen will host its third annual “Jewish Christmas” Chinese Pop-Up on Christmas Eve at the Stanley Marketplace.  All of the ticket proceeds from the dinner event will go to Project Angel Heart, a local nonprofit that delivers healthy meals to those with life-threatening illnesses at no cost. In addition to dinner, the restaurant will show two-holiday movies for people to enjoy while eating their meal.

For the event, Rosenberg’s will once again add it twist to classic Chinese-American food. While the menu hasn’t been solidified yet, past dishes have included Smoked Salmon Rangoon, Kung Pao Pastrami, Peaking Duck Lo Mein and a wide variety of desserts. This year’s menu will also have two vegetarian options and one to two vegan options. A full bar will also be available. 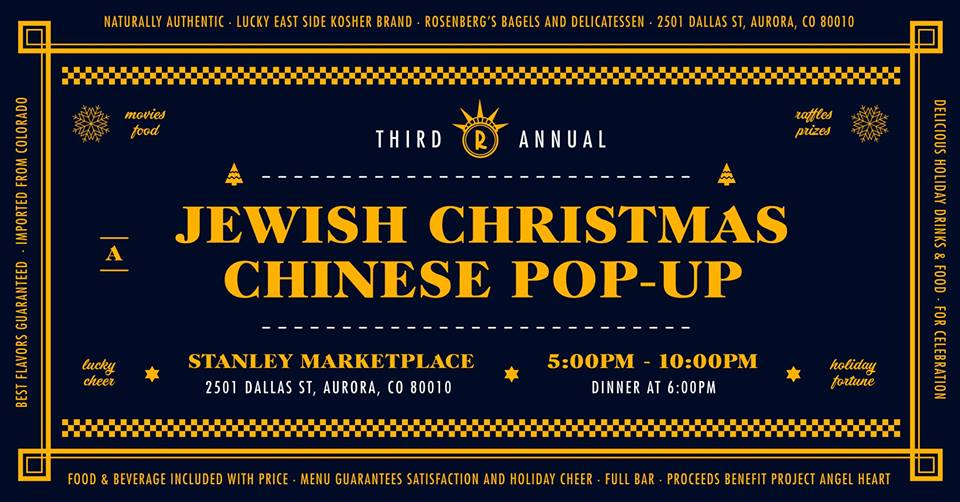 Tickets will be $60 for adults, which covers the all inclusive bar and food, $30 for kids over the age of two and free for kids under the age of two. For an additional $5 raffle tickets are available for a chance to win Rosenberg’s gift cards, weekend line passes, Rosenberg’s swag and more. .

Rosenberg’s has not announced the movies for this year’s Chinese Pop-Up, but last year’s movie selection featured National Lampoon’s Christmas Vacation and The Hebrew Hammer. Everyone will see the movie being projected onto a screen in the restaurant.

“It’s always a huge turnout and a really big thing for our charity, Project Angel Heart,” said Ryan Lewis, Stanley Marketplace assistant general manager. “Tickets have sold out the past two years so I advise [people] to get their tickets as soon as possible.”

You can purchase tickets for Rosenberg’s “Jewish Christmas” Christmas Pop-Up here. The event will be on December 24, 2017. Doors will open at 5 p.m and dinner will be served at 6 p.m.