Just Announced – Atmosphere at The Ogden Theatre in December

The Ogden Theatre just announced via Facebook that Atmosphere will grace Denver for a show December 10 with Musab, Ink Well (MInk), deM atlaS and DJ Keezy. Hailing from Minnesota, the Atmosphere duo – rapper Slug (Sean Daley) and DJ/producer Ant (Anthony Davis) – formed in 1989 and have produced eight albums and 10 EPs in their over two-decade career. The Denver show will be part of their “Welcome to Colorado Tour” featuring other stops in Fort Collins, Boulder and Aspen.

AXS writes that Atmosphere’s shows are different. Slug and Ant have prided themselves over the years in creating versatile and witty lyrics for their sound. In one of their most popular songs, “Sunshine,” Slug sing-raps about the initial pain of being hungover, then going outside and having the clean air and summer-sun revive him. He raps, “Ridin my bike around these lakes man, Feelin’ like I finally figured out my escape plan, Take it all in and the day started off all wrong, Somehow now that hangover is all gone.” You can’t help but vibe to their clever lyrics and groovy beats. 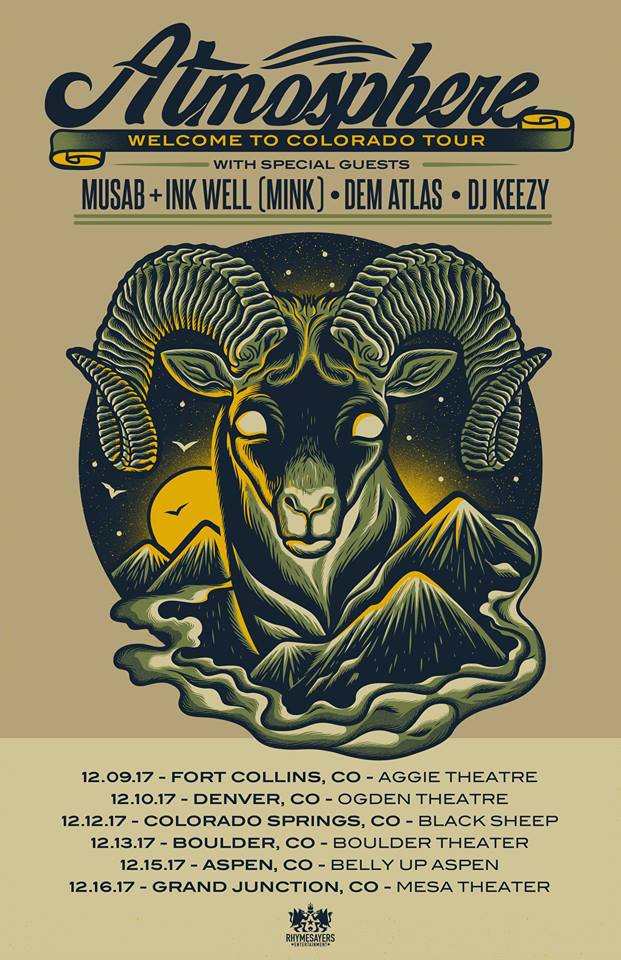 “Early on in their touring excursions, Atmosphere shows were noted in history for challenging the idea that Hip Hop audiences had to be filled exclusively with scowl-faced males fueled by ego and testosterone. Instead, they created an environment that invited women to join in on the party.” – AXS

Ages 16 and over are welcome at the show, and tickets go on sale this Friday at 10 a.m here. The Ogden is on a roll with show announcements having just announced Greensky Bluegress scheduled for January, Nahko and Medicine for the People for December and Medeski Scofield Martin & Wood in March. You can find tickets at AXS.com.