The Pros and Cons of Biennial of the Americas 2017

Biennial of the Americas celebrated its fourth event in Denver this past week, with seminars, symposiums, art exhibitions and concerts every day from Tuesday to Saturday. Though the goal of the Biennial is to connect top business, NGO and cultural leaders from the western hemisphere to improve relations, foster partnerships and share art, some opinions about the event are mixed and confused. However, even with some confusion, the Biennial brought much-needed diversity to Denver this week and delivered a few very popular events. The question for the future of the Biennial in Denver (which should occur again in 2019), is whether the experiences offered are easily accessible, thoroughly understood and translatable to action.

One interesting part of the nearly week-long series of events was that it seemed as if more attention from the public should have been shining on it. With the current conditions of the Caribbean and southern states, and the multiple Cuban highlights in the Biennial, the timeliness of the entire event had all of the makings to stir the public’s emotions and foster even more participation. Yet the Biennial’s events were overshadowed by CRUSH, the performances of Frozen at the Denver Performing Arts Complex and the preparations for Denver Start-Up Week, to name a few.

To better understand how the Biennial was received in Denver this year, 303 Magazine decided to look at the event through two lenses — pros and cons. It’s important to understand that ultimately, the Biennial is based in good intentions and has helped create connections between diverse countries in the western hemisphere in the past, mostly through artist studio exchanges and opening markets for small foreign companies in Denver. With that as groundwork, discussion about how to improve the impact of this one-of-a-kind event is best if well-rounded.

Music and dance performances: With the past few Biennials (in 2015 and 2013) interactive, immersive art was at center stage. But this year, music and dance stole the show. Between the Pedro Martinez Group, the Celebration of Pan-African Culture in the Americas and Havana Nights, Denver experienced the thrill of dance and percussion-fueled sound from our southern neighbors. The timeliness of embracing Latin American culture, specifically Cuban culture, while the Caribbean communities mourn and begin the process of recuperation was not lost on many attendees. Havana Nights — with a performance on Friday and Saturday night — transformed Denver Rock Drill into a miniature Cuban street party. There were food trucks, contemporary dance performances in one warehouse, a digital art show in another warehouse, and a main stage in the space between warehouses. The music was infectious, popping with percussion, horns, piano and a DJ, causing more than a few butts to sway.

Timely art exhibitions: Biennial was able to partner with 30 art institutions including the Denver Art Museum (DAM), Denver Museum of Nature and Science, Museo de Las Americas and Museum of Contemporary Art (MCA) this year. These major institutions present cultural and artistic pieces from all over the Americas — Canada to Chile. MCA opened its exhibition Sabor Acomodar — featuring art and workshops from Jalisco, Mexico 1915 to present, during the Biennial week with a sold out party.

Some of the smaller art organizations were able to create exhibitions that fit into the general idea of embracing culture from around the western hemisphere, like PlatteForum showcasing 21 Canadian and American artists with an exhibition titled Axis Mundi. Erin Trapp, CEO of the Biennial said, “We have been working with these partners for more than a year to align and create dynamic programming. We have worked hard to bring forward a robust arts program and have been thrilled with the partnerships created this year. We believe the curatorial direction of the exhibitions align closely with the Biennial vision and goals for the festival and are grateful for the partnerships.”

Local school involvement: This year, kids between kindergarten and eighth grade at William (Bill) Roberts Elementary were given the chance to write about why cross-cultural connections are important. The teachers chose winners who were able to attend the press conference at the beginning of the week and meet Governor John Hickenlooper, read their essays and get a special tour of the DAM exhibition, Mi Tierra. If the Biennial is to be even more successful in the future, the best way to ensure that is to gather excitement and involvement from the children of Denver. These are the ones who can benefit the most, especially when there are opportunities for them to engage with visiting political, civic and cultural leaders. Though it seems the Biennial only dipped its toes into this pool of engagement this year, the prospects for continuing collaboration with schools is something for everyday people to get excited about. 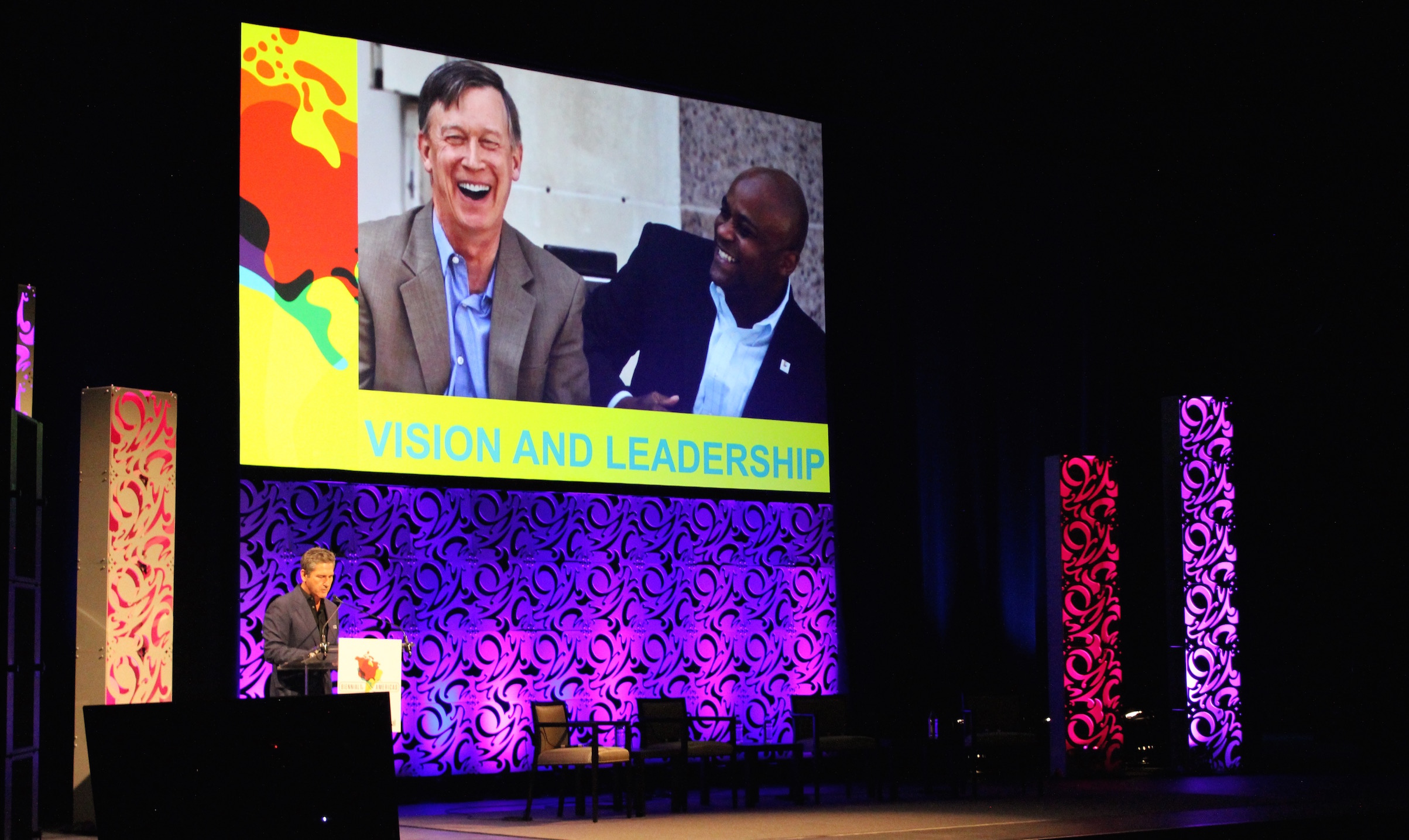 Confusion about concept and purpose: With such big aspirations for the event, there is some confusion about what exactly the Biennial accomplishes, and how. The organizers seemed to understand that attendees might not understand the connection between all of the events, and so someone like Mike Fries — the CEO of one of the biggest sponsors to the Biennial, Liberty Global — would try to explain the mission statement to the audience before major events. There is no question that fostering connections between countries and embracing diverse cultures is relevant and beneficial. But the remaining question is how everyday people — versus the movers-and-shakers who are featured at the Biennial — can benefit from its programming.

Low attendance to civic and political programming: In 2015, the Biennial organizers reported 25,000 attendees to its events. Though the numbers for this year are projected to be about the same, several of the events found themselves in positions to give away tickets rather than sell them. The Americas Symposium — which was truly an educational panel about art and technology influencing innovation in society — filled only a fraction of the 2,225 seating capacity at the Ellie Caulkins Opera House, while the parking garage for DPAC was filled to capacity for the performance of Frozen. Some of the attendance problems were undoubtedly due to natural disaster-related difficulties in the southern states, Central America and the Caribbean. Erin Trapp, CEO of Biennial of the Americas, commented that “attendance was strong,” but from the perspective of an outsider attending some of the events, that statement seems to reflect the art and culture side of things more than the civic and political.

Divide between art and politics: As with the confusion about the main purpose behind the Biennial, a main conflict with the political and social programming is how everyday citizens in Denver and abroad can fully participate and benefit, especially when the majority of discussions, panels and lunches occurred on weekdays during business hours. Unfortunately, most of the workforce is busy during those times and cannot afford to take time off work for such extracurricular activities. This kind of disconnect between the organizers and the everyday citizen is what makes people think the Biennial is only for influential leaders. It also leads to people not associating the rest of the Biennial with the amazing cultural events it plans and coordinates, like Havana Nights and the MCA exhibition. David Moke, a local arts supporter and advocate, commented, “Everyone has a different concept of what the Biennial is, based on their own personal interactions. Compare that to a music festival where everyone has a shared experience. Biennial tries to create shared experiences, like with Havana Nights, but I imagine 80% of that crowd walks away thinking their experience is what the entire Biennial is about, skipping the politics and other programming.”

If the Biennial wants to be a one-of-a-kind event that connects arts, culture, civics and politics — creating some kind of shared experience — it will have to do a better job of blending the programming and making all of the events easily accessible to the majority of regular attendees. Otherwise, the Biennial may just remain a confusing set of talks that is punctuated by the already outstanding art and culture events that Denver supports regardless.