New York born Fazal Sheikh has been photographing displaced and marginalized communities for the last two and a half decades, exhibiting them internationally and receiving multiple awards. The Denver Art Museum (DAM) has been curating an exhibition of his work for several years, resulting in the show titled Common Ground: Photographs by Fazal Sheikh, 1989-2013, which opens August 13 in the Gallagher Gallery within the Hamilton Building on the first floor.

Sheikh’s global travels have connected him to people around the world who are overlooked as individuals because of generalizations placed upon them from others. Through his photographs and first-hand accounts from the people he displays, Sheikh provides a timely exhibition for the current environment of insecure cultural communion. With his exhibits, viewers can witness a stripped back version of those living in exile across the world and find ways to connect with them. 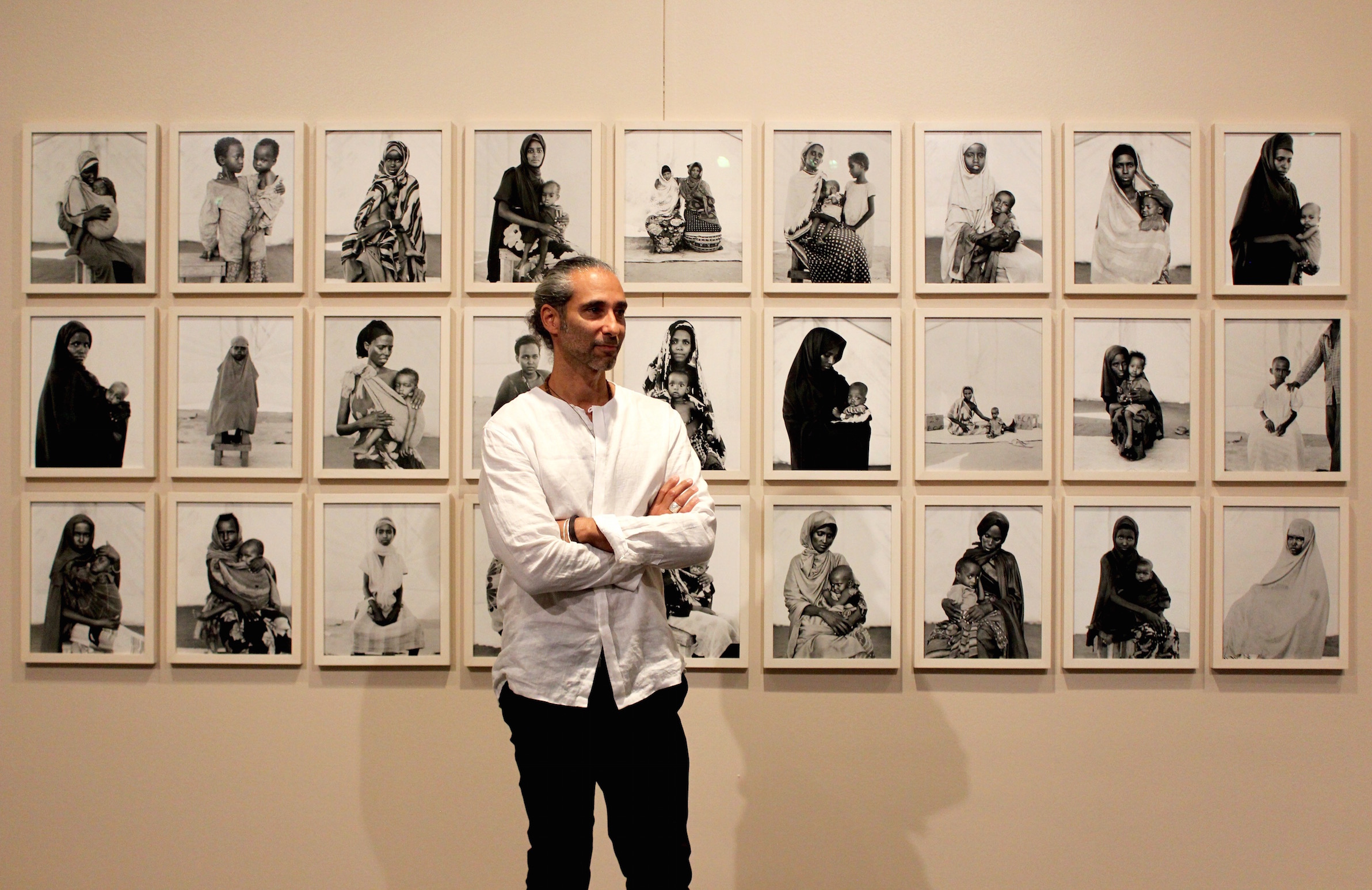 Fazal Sheikh stands before a series of portraits of women and their children at feeding stations. Photo by Cori Anderson

By stripping away the pretenses of what others say it is to be a refugee, Sheikh allows the subjects of his photographs to be the real activists for their causes. He remembers the first time he visited a refugee camp with a group of journalists who stayed for a few hours to take pictures that only reinforced the status quo of how people viewed refugees. After that experience, he felt inspired to counter what he had been shown. He wanted to create a shared experience between the people seeing the photographs and the people living the photographs — to create common ground.

To represent his own exploration through the psyches of displaced communities and the claims about those communities, the exhibition is divided into several thematic sections spanning from 1989 to 2013. With over 170 portrait and landscape photographs, the sections examine various aspects of displacement while adhering to Sheikh’s desire to use specificity to deliver each person’s testimony and project intimate voices about intense issues. In addition to his photographs, Sheikh has spent countless hours — sometimes spending years in a refugee camp — collecting stories from his subjects that he has included. These can be seen under some of the portraits and in the bound books throughout the gallery. 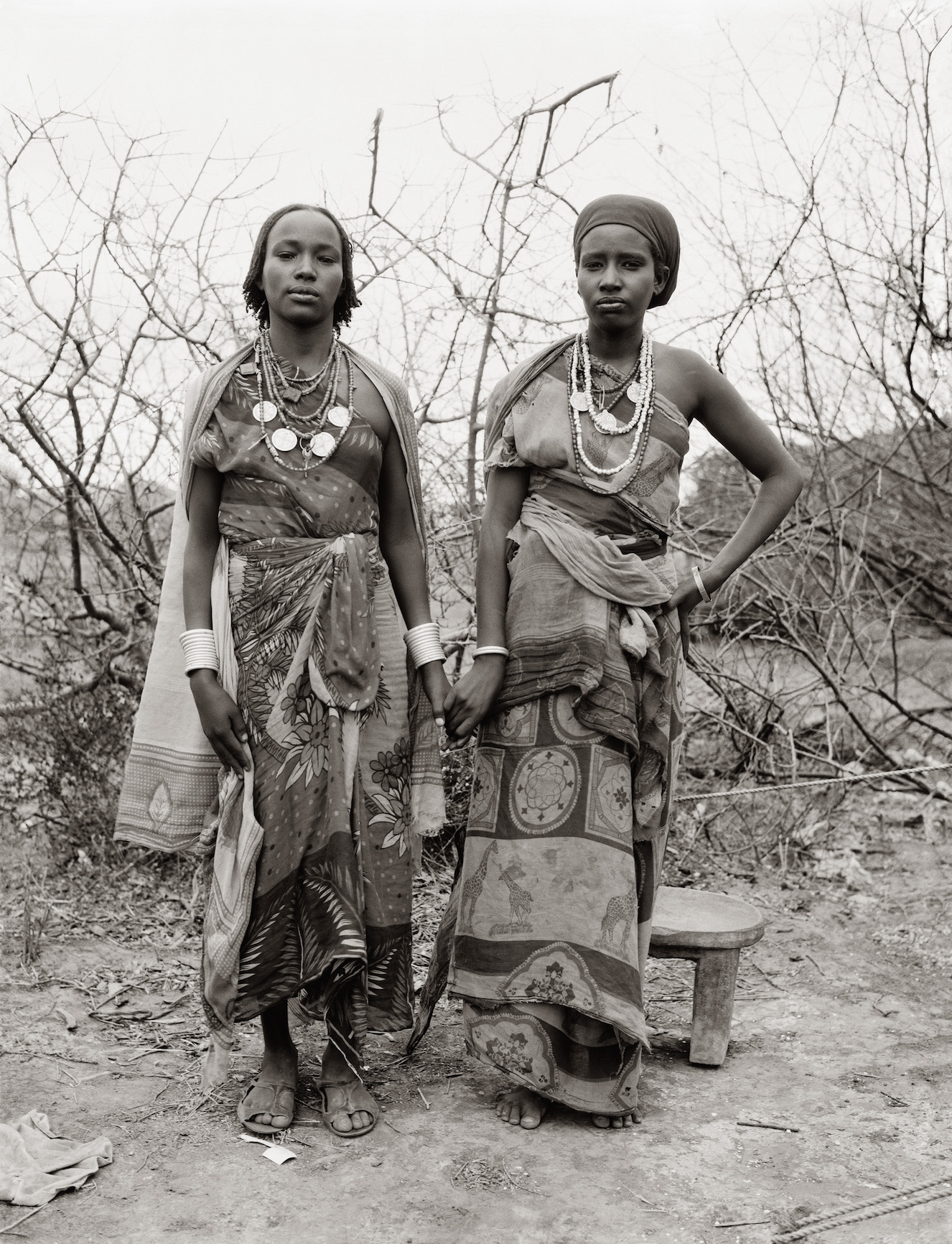 The opening room chronicles Sheikh’s early years (beginning in 1989) visiting refugee camps in east and south Africa. In taking these photographs, Sheikh came to realize that the hardships and grievances the refugees survived through did not define who they were. By attempting to know the person more, he discovered other qualities that he wanted to photograph — like friendship, self-determination and courage. Those qualities are globally relatable, regardless of the circumstances one might find themselves in, and are therefore a more effective way to encourage empathy. 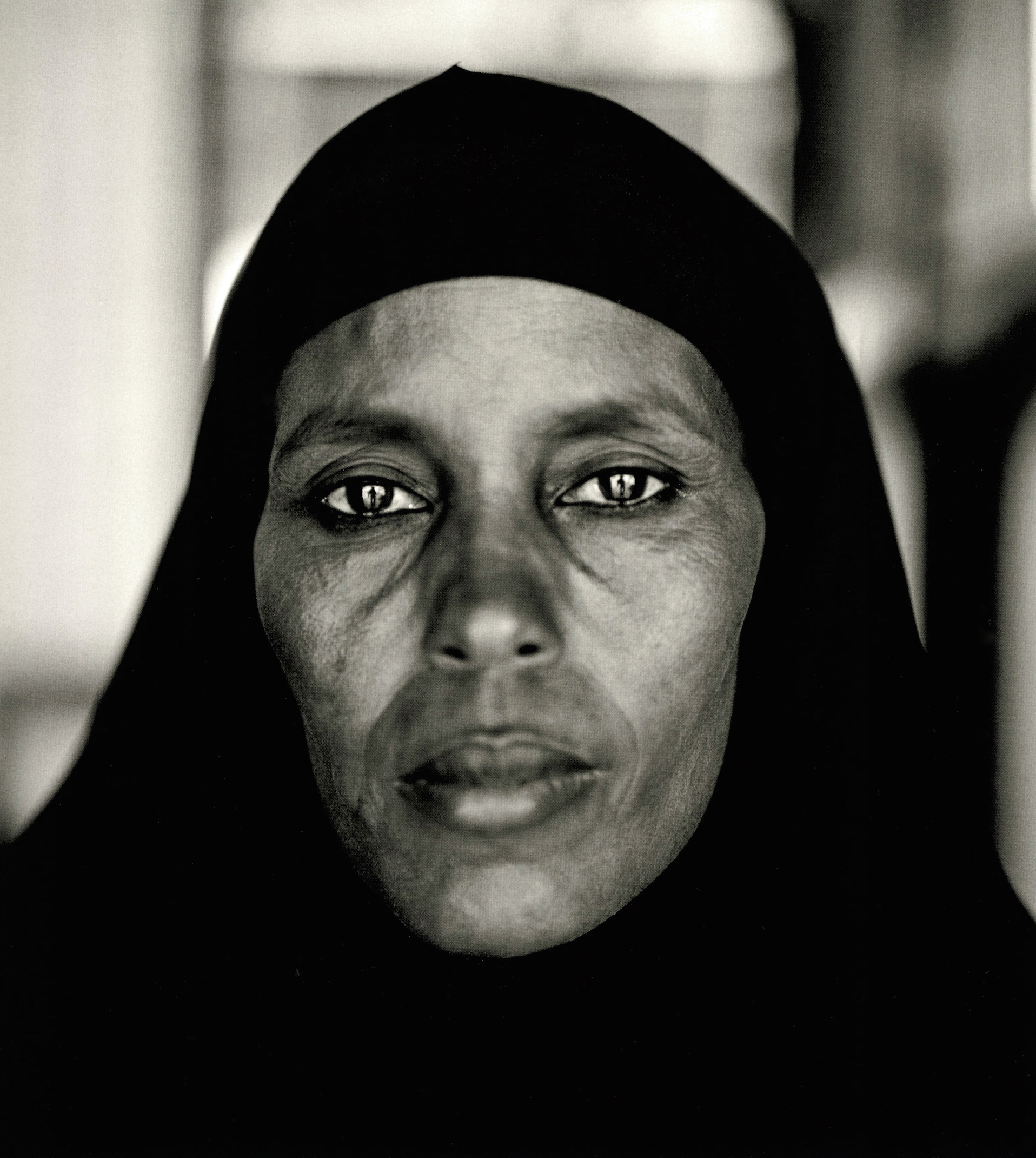 The next area shows women and children left behind as a result of war in Somalia, millions living in camps mostly in Kenya. Sheikh centered on the Dadaab camp complex which at its peak was populated by almost half the amount of Denver citizens — 330,000 people— shown with the five-panel panorama that displays huts and trees stretching beyond the horizon. The stories of the women who brought their extremely malnourished children to the feeding station almost brings Sheikh to tears when he speaks of it, and this kind of emotion exemplifies the attachment he hopes others will discover through his portraits. 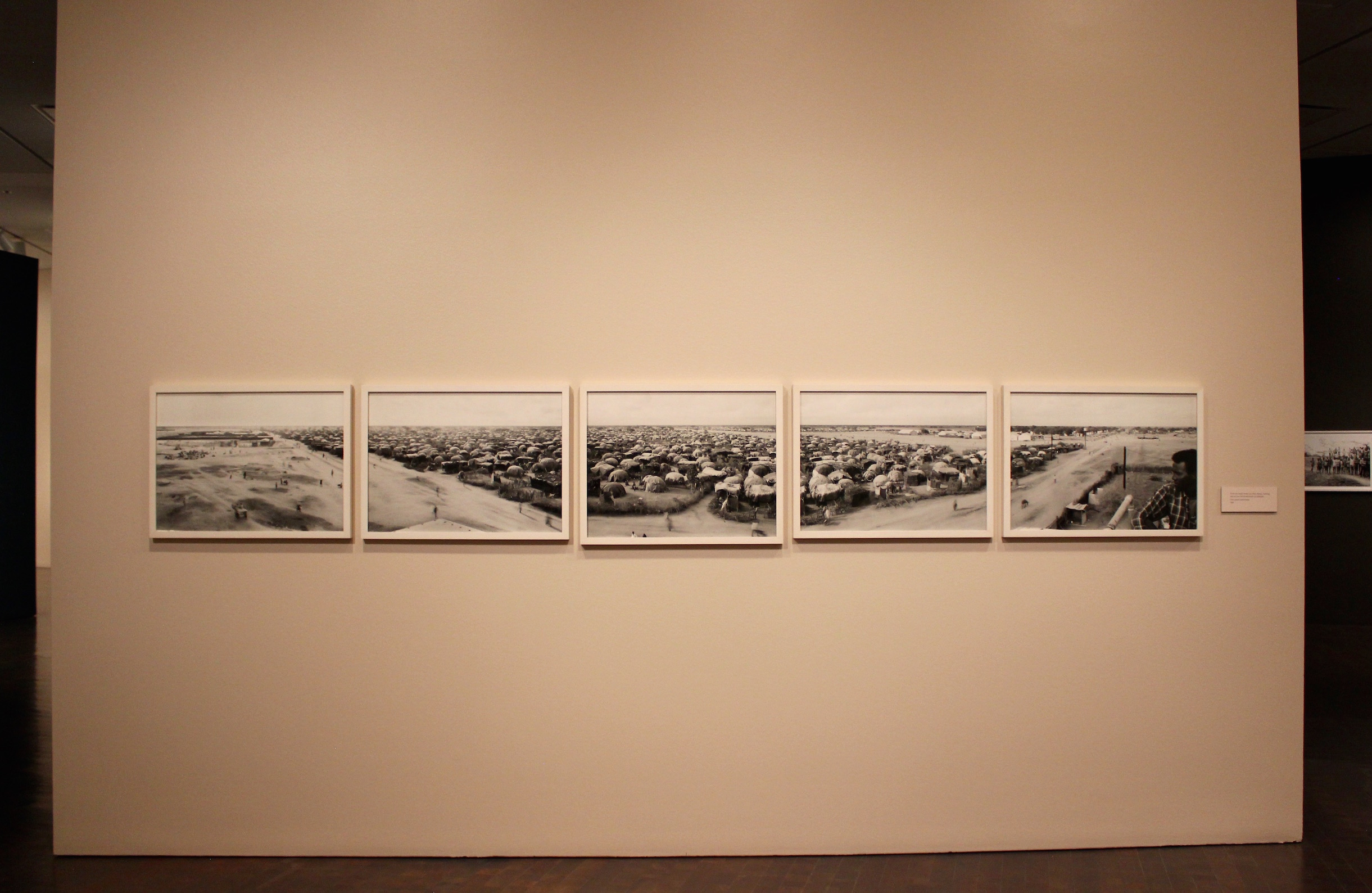 Five-panel panorama, part of “A Camel for the Son.” Photo by Cori Anderson

Widowed women in India, living as an exiled sisterhood, are highlighted in the following room. Widowhood is a stigma in India, prompting women to find refuge and asylum at the Indian holy town Vrindavan. As exiles, these women are disconnected from their families and anything else familiar, but their spiritual devotion binds them together as a group. In this way, this room in the exhibit seems to hint toward gender being a common ground in certain circumstances, especially when the opposite sex has betrayed the trust of the other.

Following that, but slightly related, is a section dedicated to orphans, young girls and tragedies resulting from bad marriage arrangements. Though the circumstances these testimonies are born from may seem completely foreign, the collaboration shown by the subjects of the stories display the common ground Sheikh yearns to uncover. Reading about and seeing the result of the collective efforts of people who care deeply about the same thing removes the barriers between culture, religion and geography and leaves a sense of compassion in its wake. 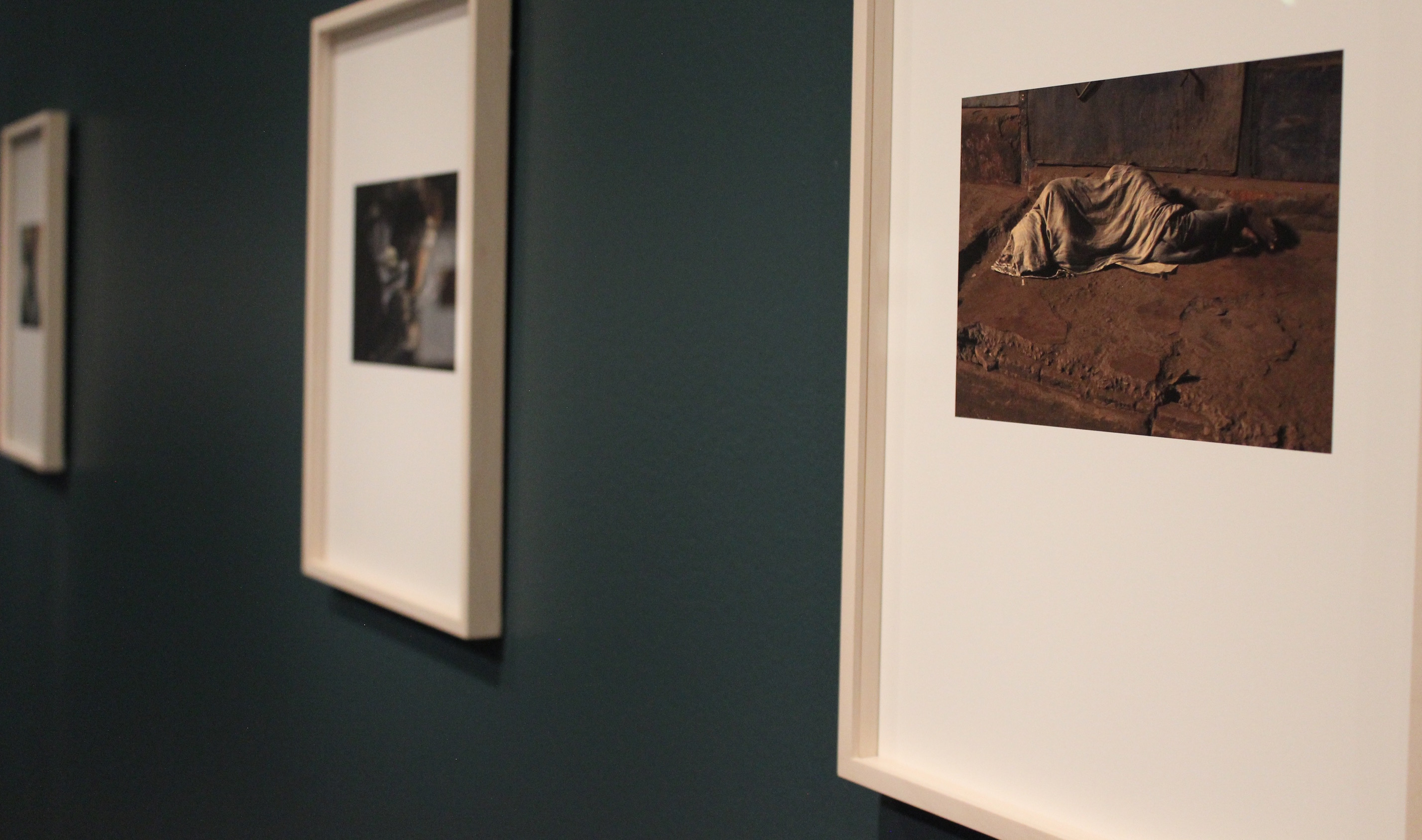 The first color photographs by Sheikh. Photo by Cori Anderson

Moving from the brightly lit room of children, the somber lighting and uniform display of the next room departs from Sheikh’s typical technique and are his first color photographs. His goal was to “create a tender visual poem where sleep, death, dreaming and passage are closely interwoven,” with images of sleeping homeless people, shrouded bodies waiting for cremation, doorways and the night sky mixed together and sometimes indistinguishable. This tender poem is an attempt on Sheikh’s part to portray different cultures’ understanding and acceptance of the passage of life — something that he admits Americans are rather insecure about. 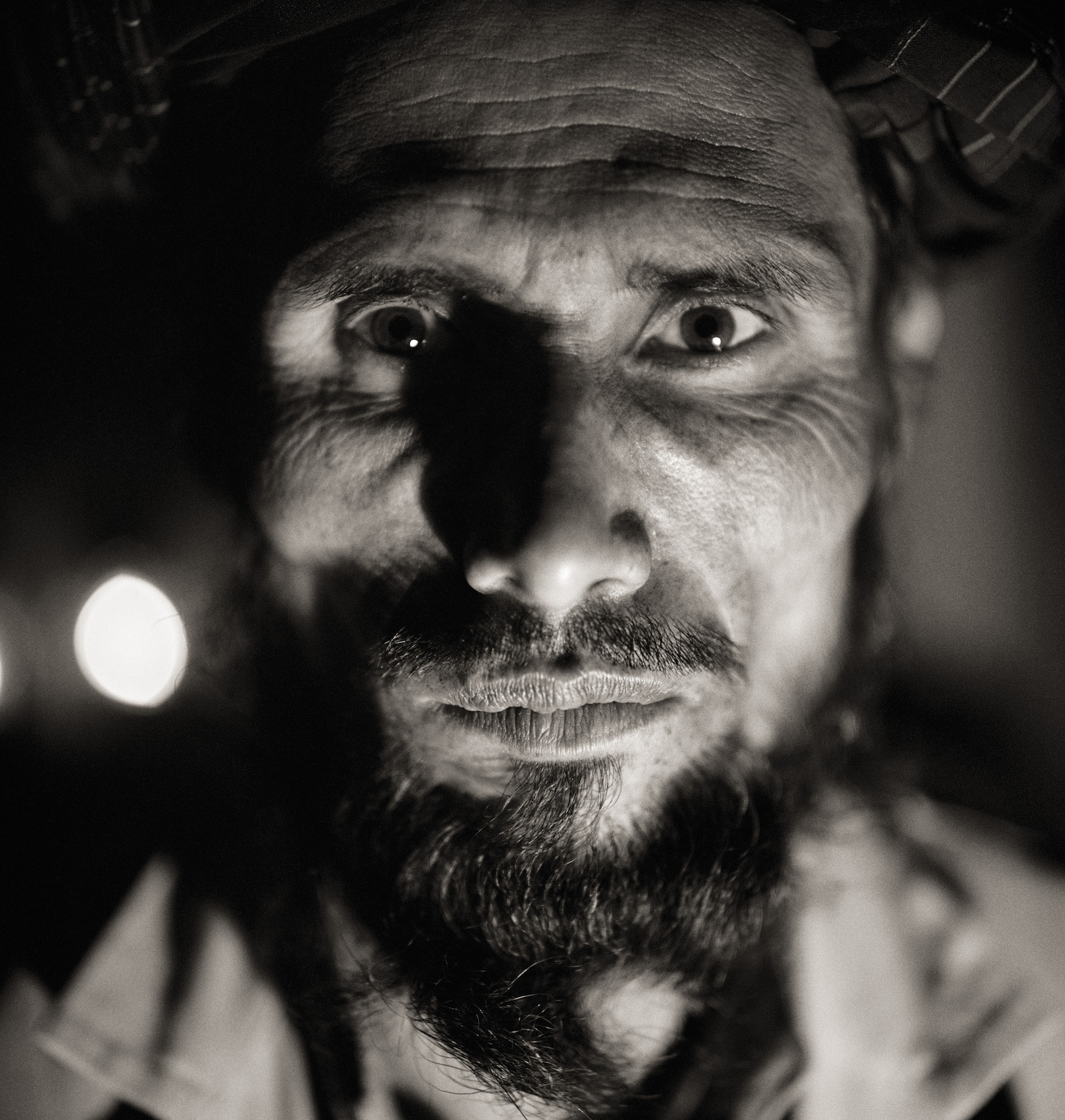 Around the corner are photographs and drawings from Afghanistan war refugees, something that hits close to home for Sheikh, whose grandfather lived many years ago in the valley these Afghan refugees settled in for relative safety. In addition to photographs and testimony, the center area displays drawings given to Sheikh by young boys in the camp about their experiences. The first-hand accounts of mujahideen fighters is especially captivating in this portion of the exhibition, paired with the common thread of people recounting lost loved ones appearing in dreams.

The final room is even more somber and darkly lit than the visual poem room. It features the journey of one woman, Seynab Azir Wardeere, a Somali refugee who was assaulted in front of her children and witnessed the murder of her father in their home. She managed to seek asylum in the Netherlands after years of trials and tribulations. In order to frame her story in a new way, Sheikh devoted the room to seeking for an understanding of this woman’s view of the world before understanding her place in it. In order to do so, many of the photos are blurry, vague images of dark and light — a theme reinforced by quotes like, “Allah has adorned the nearest heaven with lamps — stars as decoration, missiles to ward off the devils and signs to guide travelers through the darkness of the land and sea.” 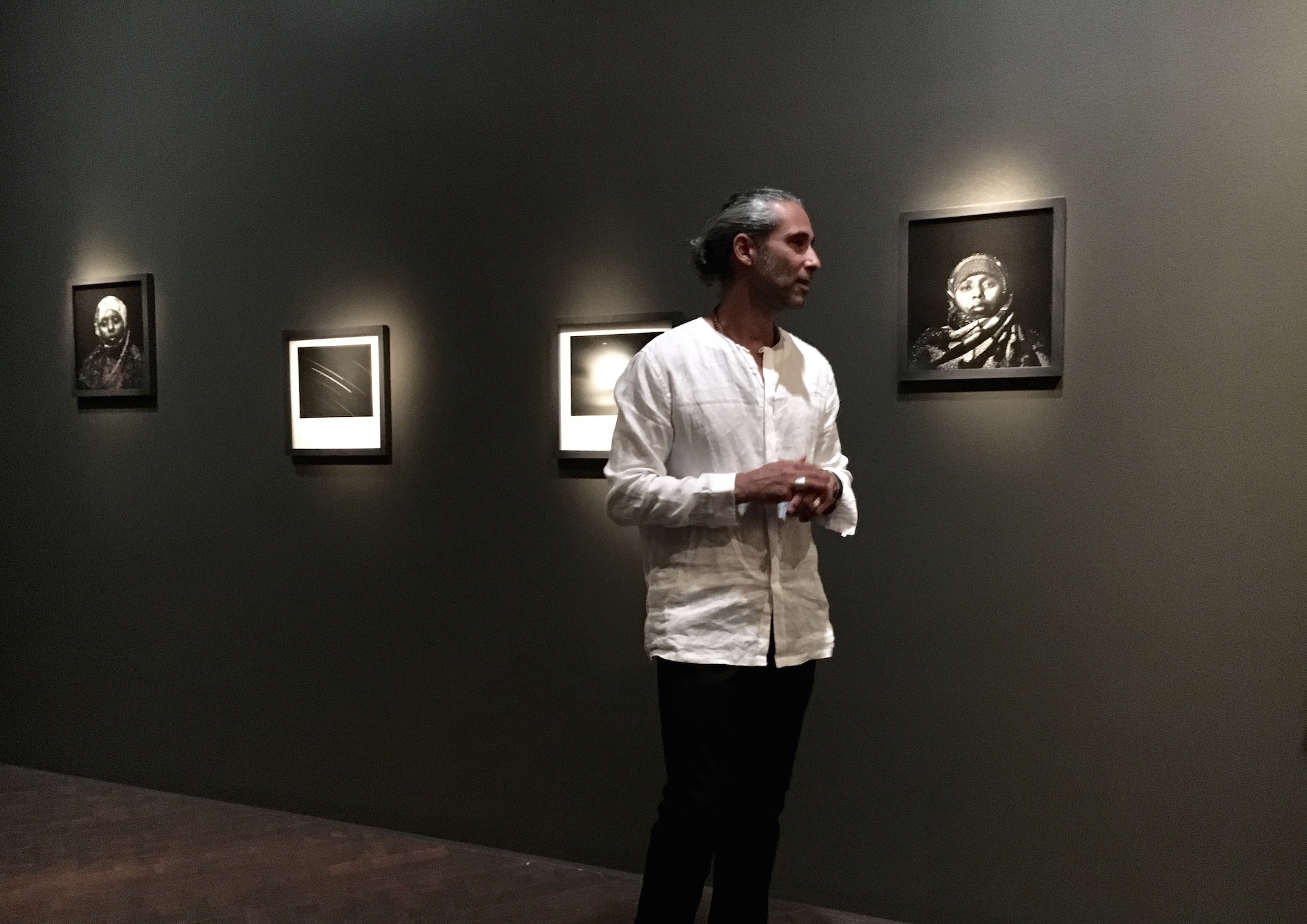 Sheikh speaks in front of the photographs of and relating to Seynab Azir Wardeere. Photo by Cori Anderson

With more than a handful of distinct areas to walk through, all displaying Sheikh’s work, Common Ground invites viewers to linger on each portrait and landscape. This kind of meditation brings attention to the stories and souls beyond the lens. DAM is presenting this exhibition with serious intent toward current events, hoping that the sharing of its message will resound with a diverse group of people. In conjunction with that mission, the museum will be providing special programming to engage the local refugee population and examine their experiences within a larger global context.

The collected photographs of Common Ground are being displayed at the DAM for the first time, with a book of Sheikh’s work available in The Shops at DAM. After the exhibition in Denver, Common Ground will travel to the Portland Art Museum from February 24 to May 20, 2018. 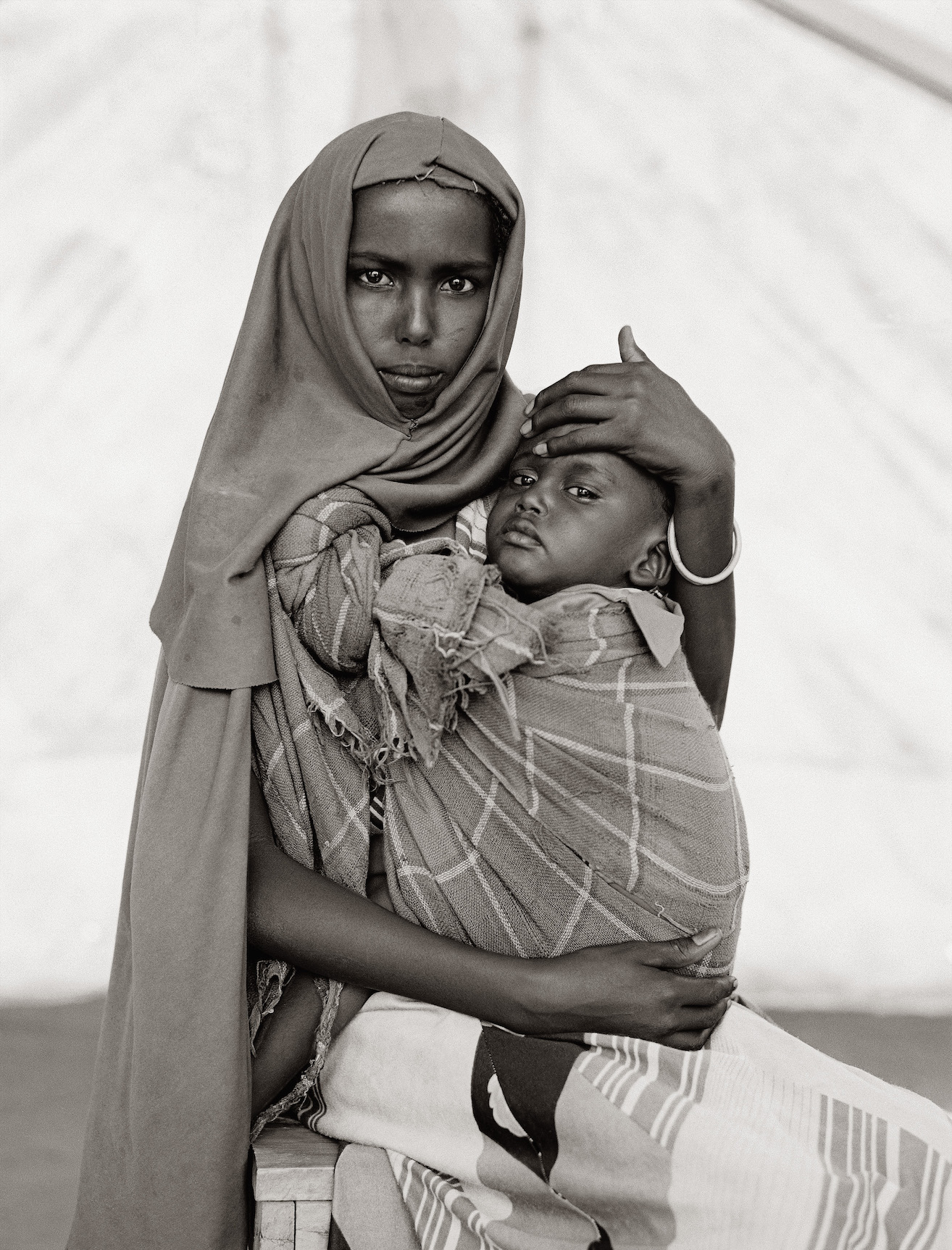 Alima Hassan Abdullai and her brother Mahmoud, Somali refugee camp, Mandera, Kenya, 1993, from the series A Camel for the Son. © Fazal Sheikh