A Look Behind Scenes of the Colorado Ballet’s Costume Department

For years now, The Colorado Ballet has provided the Denver area with breath taking performances and memorable acts such as its annual performance of The Nutcracker, Romeo and Juliet and so much more. First conceived as a ballet school in 1951 by its founders, Freidann Parker and Lillian Covillo, the school quickly grew into the Covillo-Parker Ballet School in 1961. Fast forward to 2017, and the Colorado Ballet is now known as a world-class dance company with 30 professional dancers and 20 studio company dancers presenting more than 50 performances a year. 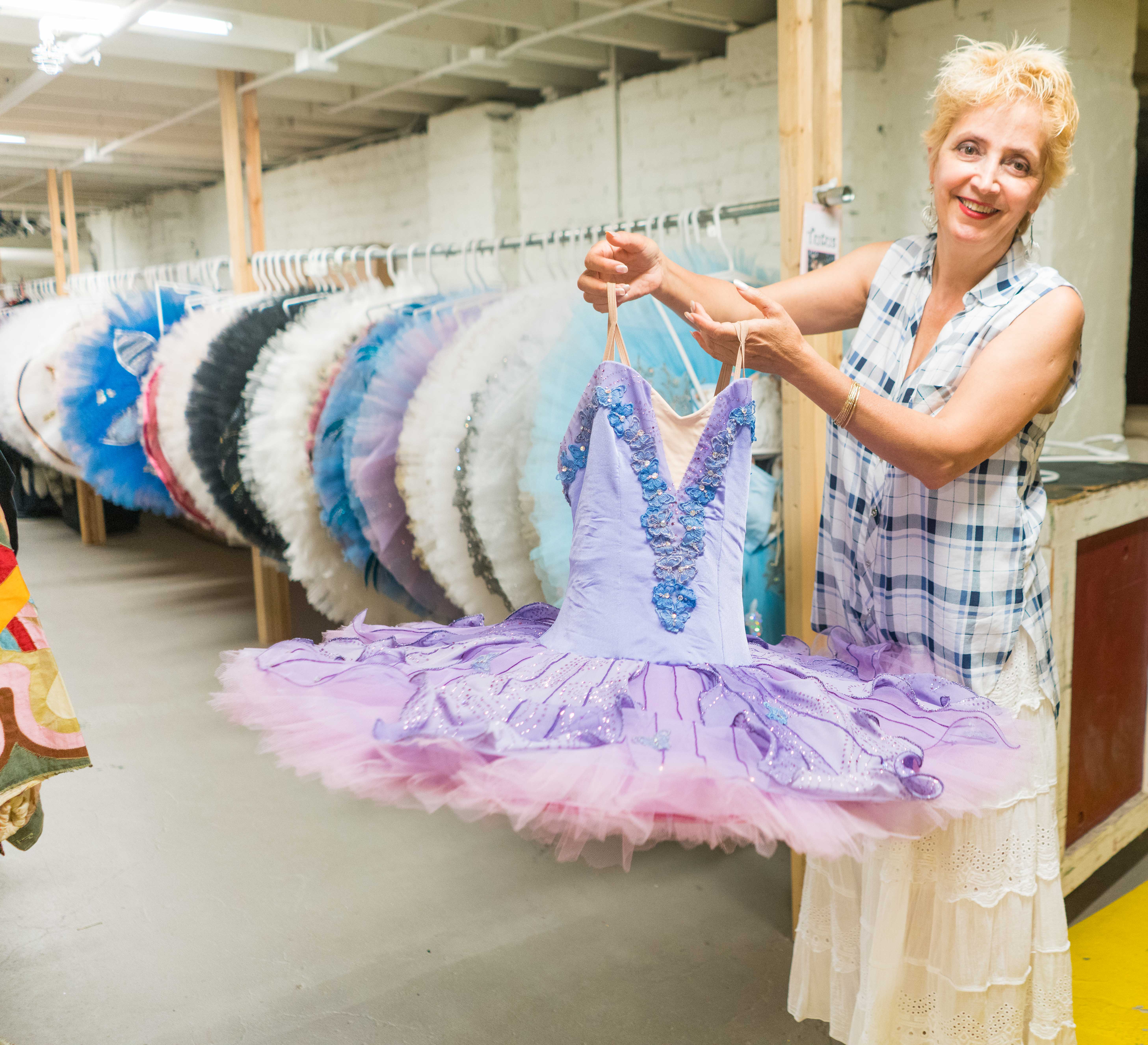 Shirin Lankarani holding up one of her designs. All photography by Meg O’Neill.

With multiple performances throughout the year, it’s hard to believe that the Colorado Ballet’s costume department runs on the sheer man power of only two full-time costume designers. The costume department is headed by Shirin Lankarani who has worked with the ballet for almost 20 years. Before coming to the United States, she worked in the world of Cinema in Iran. “I was a director and costume designer. So when I came to the states I wanted to keep working in that field. So I came to the states, and started at the ballet as my first job…and I’m still here.” Elijah Meader acts as the ballet’s wardrobe assistant manager and has been there since 2013. Together the two manage and produce all of the looks seen on stage at the Colorado Ballet.

Despite the massive amount of garments the ballet is responsible for, it doesn’t take Lankarani all that long to locate what she needs. “Everything we have is organized by production,” she stated. They currently own their own costumes for The Nutcracker, Dracula and many more. However, some productions may require them to rent costumes from other ballet companies as well as sell their own costumes in order to acquire new pieces. “We just finished up with Romeo and Juliet and no longer needed the costumes, so we sold it to a company in Japan.” While they may rent and borrow costumes from time to time, the costume department typically finds themselves creating pieces from scratch.

The day to day process of the costume department is always changing, depending on what productions are up and coming. Currently, Lankarani is working on a costume for the Spanish dancer who appears in the holiday production of The Nutcracker. In fact, each year The Nutcracker is always seen as the busiest production. Not only do seats always sell out, but the volume of costumes is double what one might see in another production. Lankarani said, “We have lots of dancers and costume changes to take care of. Some dancers might have to change multiple times throughout the production, and many times we’re doing alterations on the spot.”

While there may be rows and rows of costumes throughout the space, the majority of the department’s budget is spent on pointe shoes. “We have a closet of just shoes, with all different styles and brands…since some dancers prefer a specific brand.” They import their shoes from Russia, Paris and New York, with each dancer going through five pairs of shoes a month. The costume department will also hand dye each piece of footwear per production. “Two years ago we did Alice in Wonderland and had to dye, in house, 150 pairs of shoes. But sometimes dancers will just color their own shoes with a magic marker since the audience can’t tell so far from the stage.”

Through out Lankarani’s 20 years at the ballet, her favorite production to date has been Dracula. “I fell in love with it because of the costumes. They’re fun and elaborate, but also dark. We got the costumes from England and our very first showing of Dracula was difficult in terms of costumes, but now I love it and look forward to it.”

The Colorado Ballet has grown into a large production throughout the years and is now regarded highly among the dance world. In fact, The Colorado Ballet’s production of The Nutcracker was rated as the best Nutcracker in the US via the Annual Goldstar National Nutcracker Award. “A lot of things have changed in recent years,” stated Lankarani. “We moved to this new building which gave us more space for costumes and to work, which we really needed.” While the department is much busier now with multiple productions a year, Lankarani is excited about all the change and looks forward to many more years of seeing the Denver dance community develop.