If you’ve ever wondered what it would be like to step inside the different worlds of Star Wars then be prepared to have your geekiest dreams come true. On April 29, head to the Wings Over the Rockies Air & Space Museum, where you’ll have the chance to explore the realities within Star Wars at the Star Wars After Dark, adults only event. This is an adult-centric play on the family friendly event, Star Wars at the Hangar that includes face painting, opportunities for pictures with familiar characters, crafts and costumes. Instead of face painting and kid-friendly crafts, Star Wars After Dark includes a multitude of similar activities geared more toward the adult Star Wars fan.

“The big draw is being able to go to a lightsaber school and prepare to fight Darth Vader. After your training, you then take part in a lightsaber duel with the Dark Lord himself,” Matthew Burchette, Wings Over the Rockies curator said. 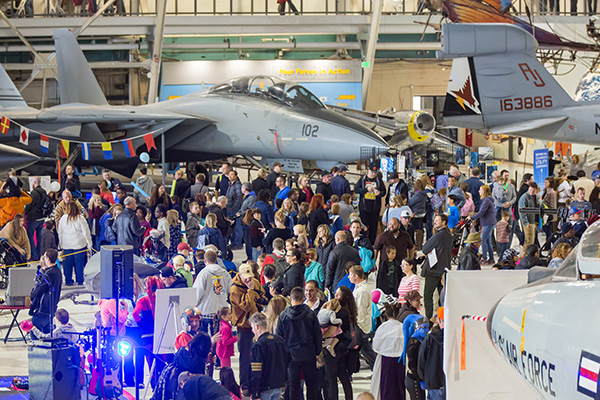 Last year’s Star Wars at the Hangar. Photo courtesy of Wings Over the Rockies.

Other enticing adult activities that the event will include are: a recreation of the Mos Eisley Cantina from Episode IV A New Hope, interactive games and trivia, an appearance by former LucasFilm modeler and Death Star and X-Wing creator Colin Cantwell (who will be selling and signing his book), Star Wars caricatures and a live oil painting demonstration by licensed Disney artist, Kevin Graham. There will also be music provided by The Fabulous Boogienauts, light appetizers, drinks at the cantina and tons of characters in costume.

“(The event) has grown by leaps and bounds. It started out with just about 40 Star Wars fans here one night, but as soon as The Big Bang Theory did an episode on May 4, we have just gotten bigger and bigger. Last year was 4,500 people over the course of one day. This year we expect the attendance to be close to 6,000,” Burchette said of the museum’s two-day festivities.

Though Star Wars After Dark is going to be a more intimate atmosphere than the bigger, all ages event, there is still plenty of fun and entertainment for everyone to enjoy. So be sure to get tickets while you can because this event will be a FORCE to be reckoned with.

“We are almost sold out for After Dark but will be selling tickets online for the Sunday event up until Wednesday, April 27, I think. After that tickets will only be available at the door,” Burchette said.

Tickets for non-members of the Wings Over the Rockies Air & Space Museum are $30 and $20 for members. You can find information about tickets and purchase them here until the event is sold out. For a Star Wars event you can bring your kids to, check out information about Star Wars at the Hangar, which is hosted at the same place but a day later on April 30. See information and ticket availability here.