Glass pipes have been considered drug paraphernalia for a few decades now. But as states decriminalize marijuana, glassblowing and lampworking to make pipes has become an accepted and sought after art form.

Denver, to accompany its proliferation of dispensaries, hosts a heap of headshops that sell glass pipes of every variety. As customers continue to refine tastes in their choice of strain, many also want their smoking apparatus’ to be not only utilitarian and durable but beautiful. Sure, you can smoke out of an apple or you can roll a joint, but pipes provide a creative experience to a smoke break. Also, buying locally made pipes supports local art.

Jonathan Faltermeier and his father Don have been creating glass pipes for decades, with Jonathan recently gaining a reputation for his insanely intricate pieces that will blow your mind — blazed or not. They operate under the name Phantom Glass, and 303 Magazine visited the father and son’s home studio in Commerce City to see them in action and discuss the art of glass pipes. 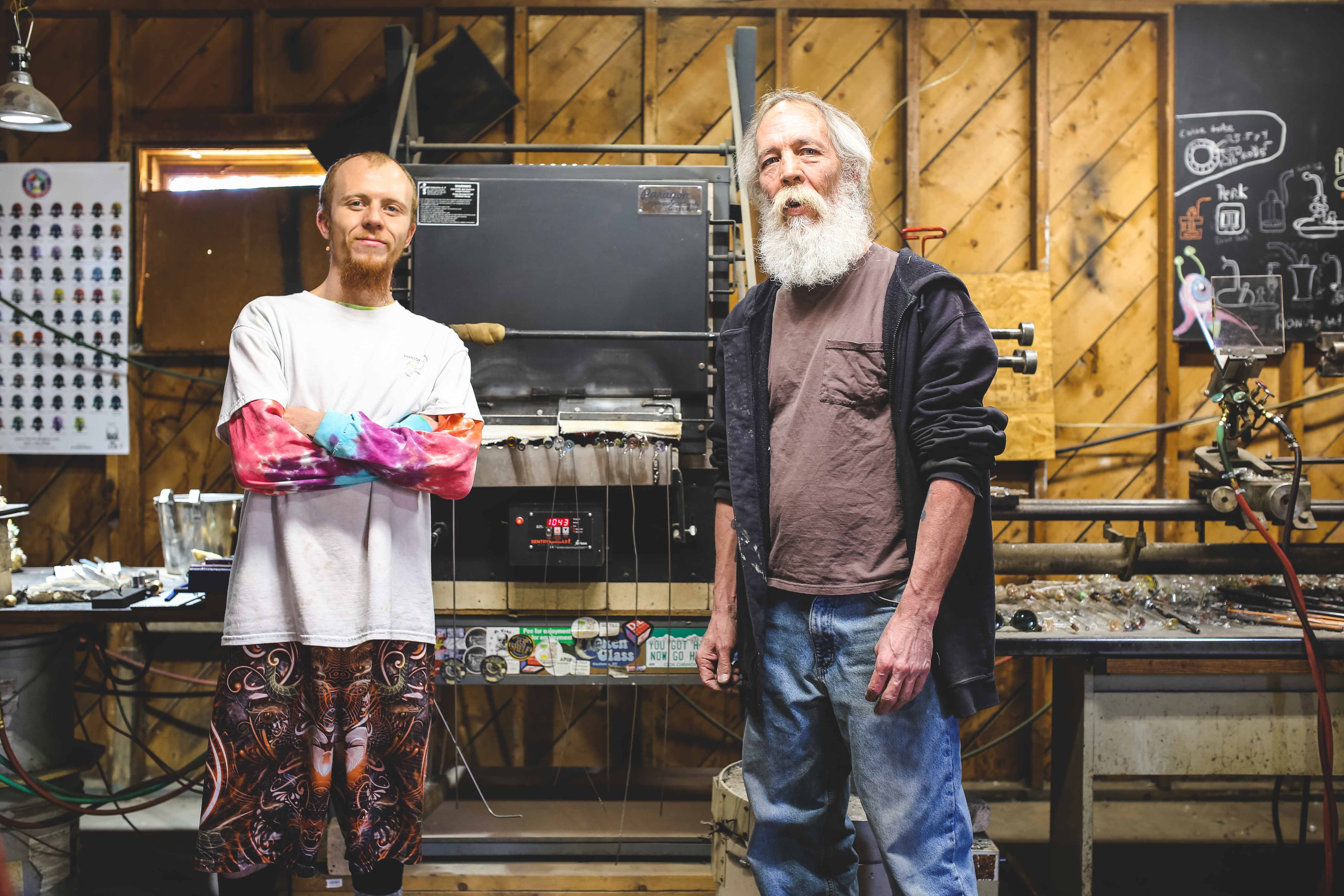 Jonathan and his father Don in their home studio.

Glass pipes are made by two different techniques — glassblowing or lampworking. Glassblowing typically involves at least two people and requires someone to inflate molten glass through a blowpipe. Lampworking, usually done alone, is the technique of using a torch to melt glass, which is then shaped with tools and by hand movements. Sometimes lampworking is known as flameworking or torchworking. Jonathan and Don use lampworking, beginning with a large tube of borosilicate glass. 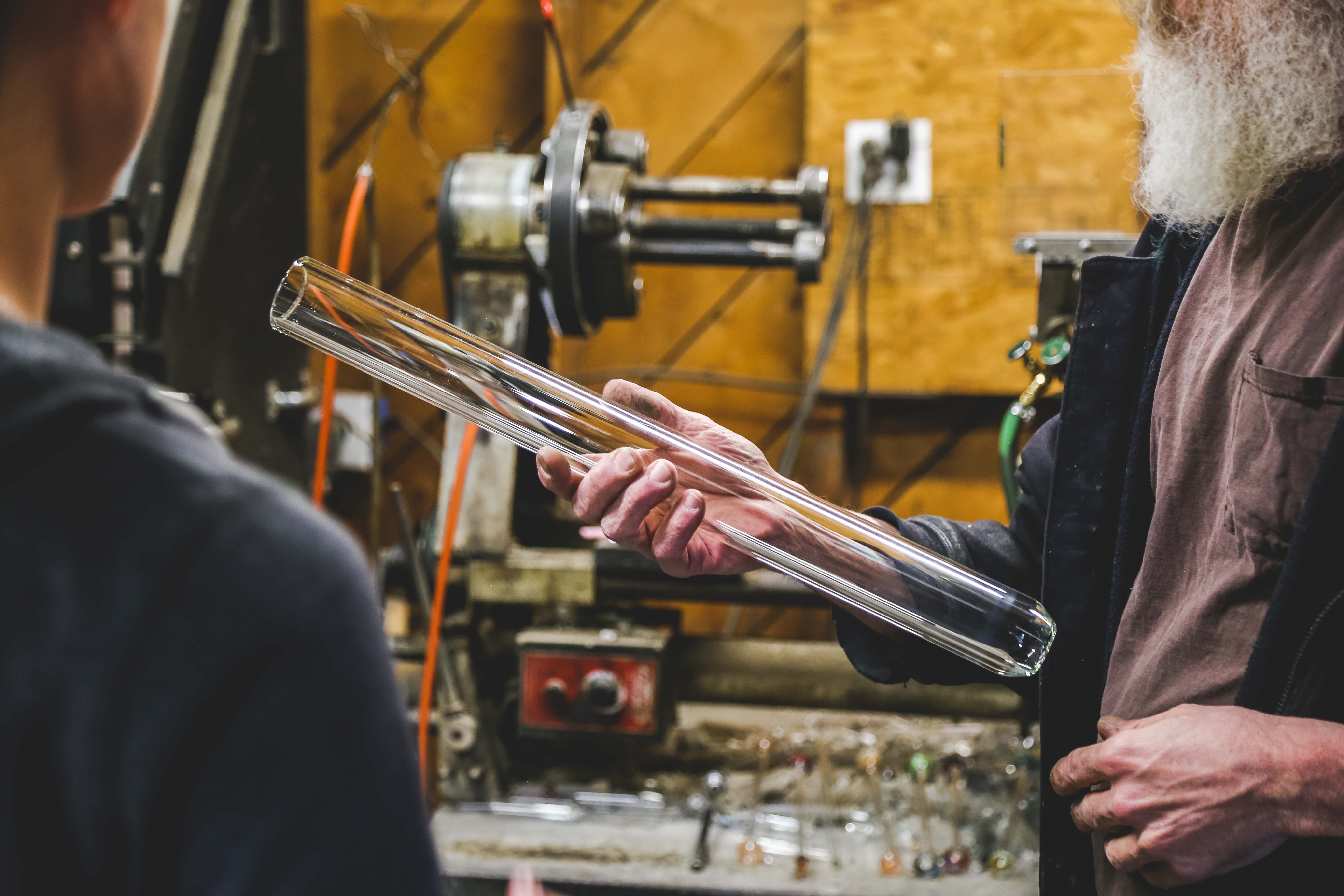 Don taught himself how to create glass pipes on the Grateful Dead tour 30 years ago — where the pioneers of the glass pipe movement originated — and eventually passed on his knowledge to his son, Jonathan. Don said, “I’ve been blowing glass since before there was color in the pipes. My wife used to paint the hummingbirds on by hand.” 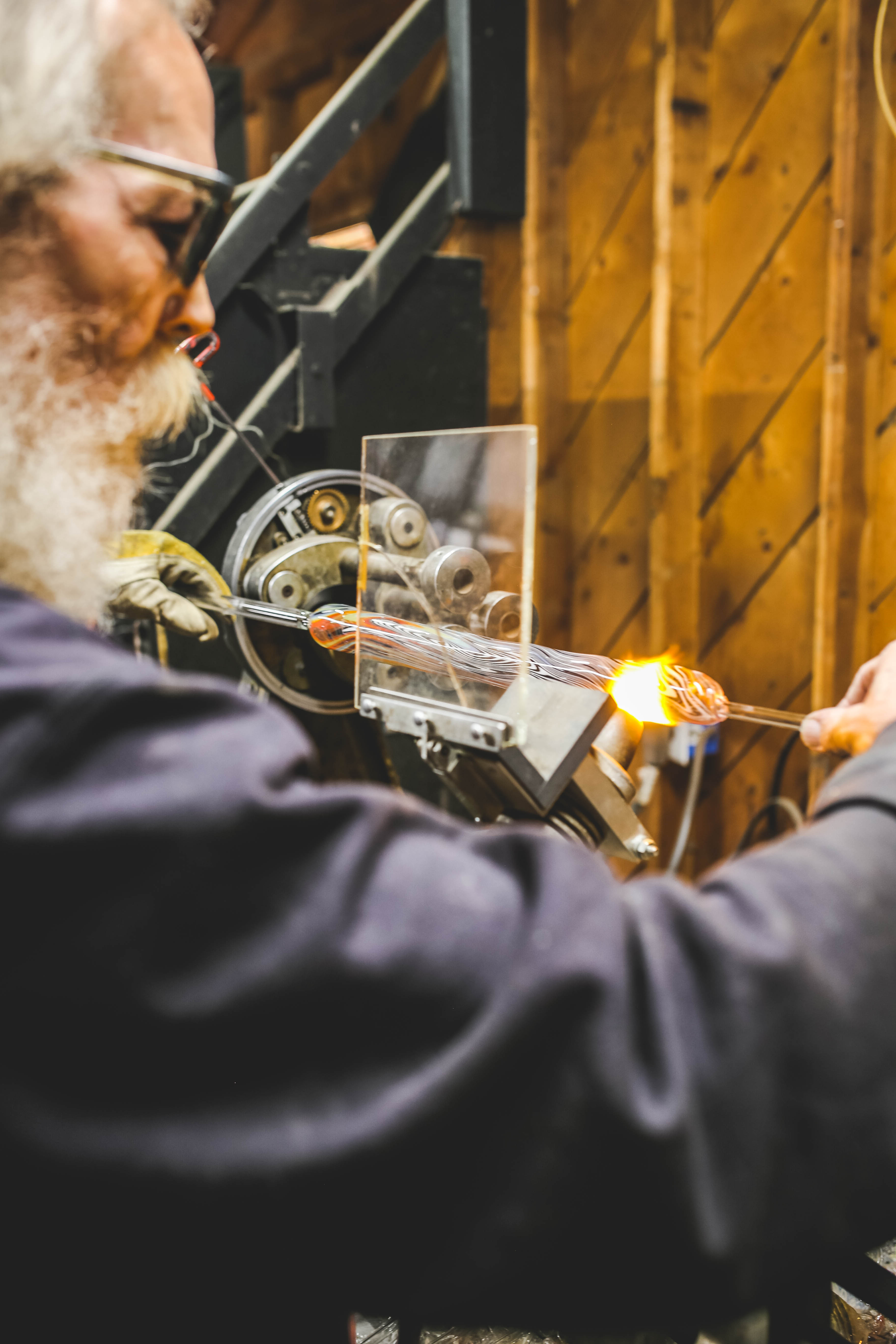 Don, who is more utilitarian about his creations than Jonathan, pulls large tubes of a single pattern and then breaks those apart later to create several different pipes.This would generally be known in the glass pipe community as “production” — or put more simply, making a shit load of cheaper pipes because that’s what pays the bills. His repertoire includes spoons, sherlocks, bubblers and bongs. 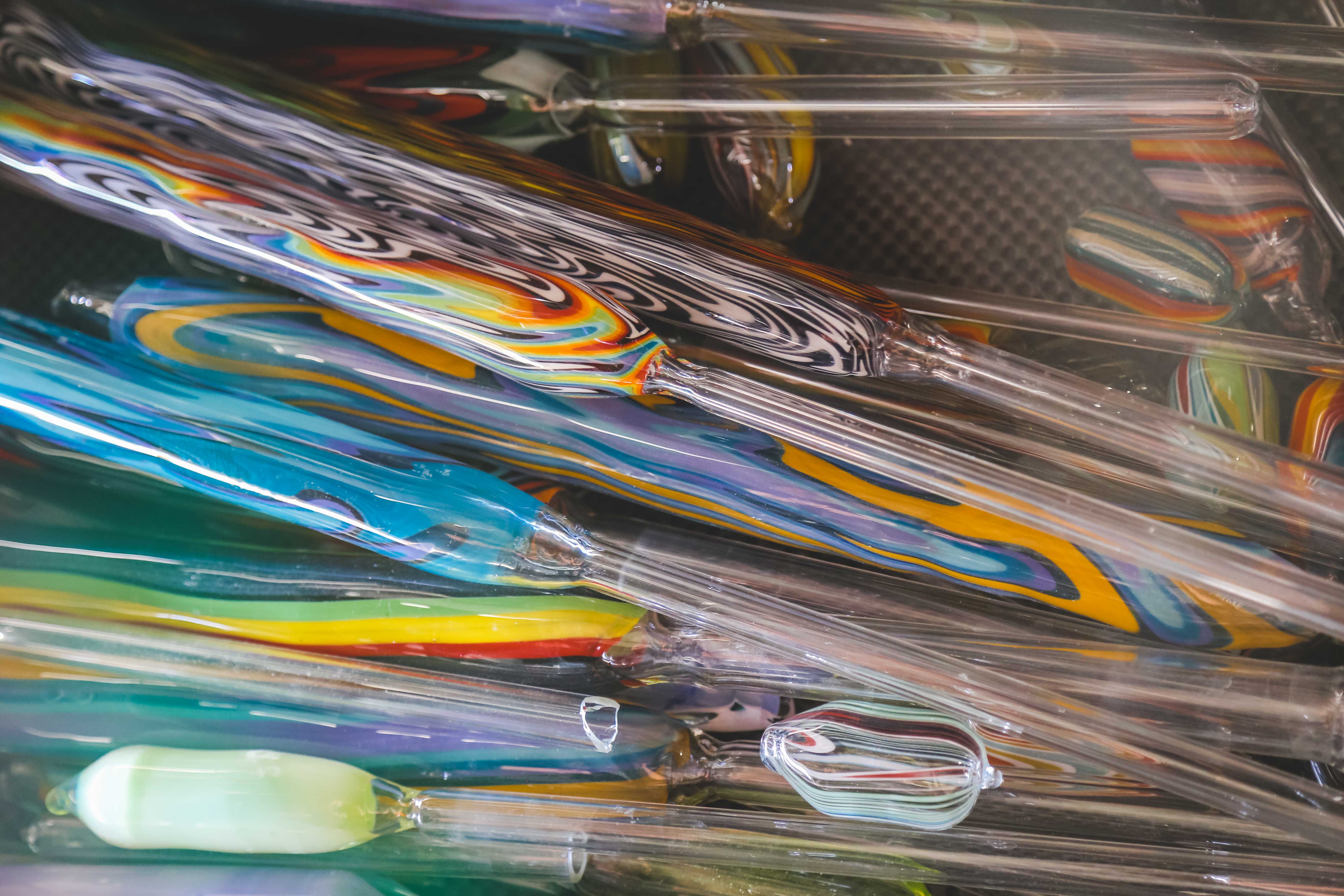 Jonathan focuses on one-of-a-kind artifacts which means his process is often improvised. Although many of his techniques have come from learning the “production” side, Jonathan’s pipes have entirely new dimensions that come from his impromptu style. He begins with the same borosilicate glass that his dad uses, but the final products consist of sometimes hundreds of add-on tubes and other glass details. Ultimately, Jonathan leaves almost no trace of the original shape of the borosilicate tube.

Creating pipes for a living is no easy task. Working with glass and extremely hot flames poses inherent risks — cuts, burns, breathing in toxic fumes — and learning how to master the movements and steps takes decades. Most often, new flameworkers apprentice under an experienced one, learning what they can before committing countless hours to practice.

Don and Jonathan’s mastery is apparent with their ease around the loud and hot apparatus’ in the garage, but Don insists that glass is a medium you “either understand or you don’t.” He’s proud as he points out how adept Jonathan has always been with glass, admitting that Jonathan has never had another job and doesn’t seem to need one. But that seems to be an exception in the glass pipe community, where most are not able to support themselves wholly by selling pipes.

“Working with glass has taught me so much about life, about my body, my mind, my soul. When I find a flaw in a piece, it gives me a whole new perspective about something.”

Another pressure on the community is the influx of imported pipes, priced far below the value of locally made ones because they are mass-produced and made from less durable and cheaper glass. At Rigs 4 Us, a local headshop on East Colfax where Jonathan and Don sell many of their pieces, the owner Anna demonstrated the durability of local glass by throwing one of Don’s pipes onto her hard floor. The pipe bounced a few times and skidded to a rest, unharmed.

However, the pipes that end up at Rigs 4 Us and other headshops in town are successes. As Jonathan noted, “there have been many times I’ve been working on a piece and it’s cracked and doesn’t make it. But those are life lessons I have to learn. I take it as a failure, I understand it as a failure. But then I like to learn from what I did wrong.” In the studio, there is a bottom drawer in a large tool box that holds many of Jonathan’s failures. “Working with glass has taught me so much about life, about my body, my mind, my soul. When I find a flaw in a piece, it gives me a whole new perspective about something,” he said. 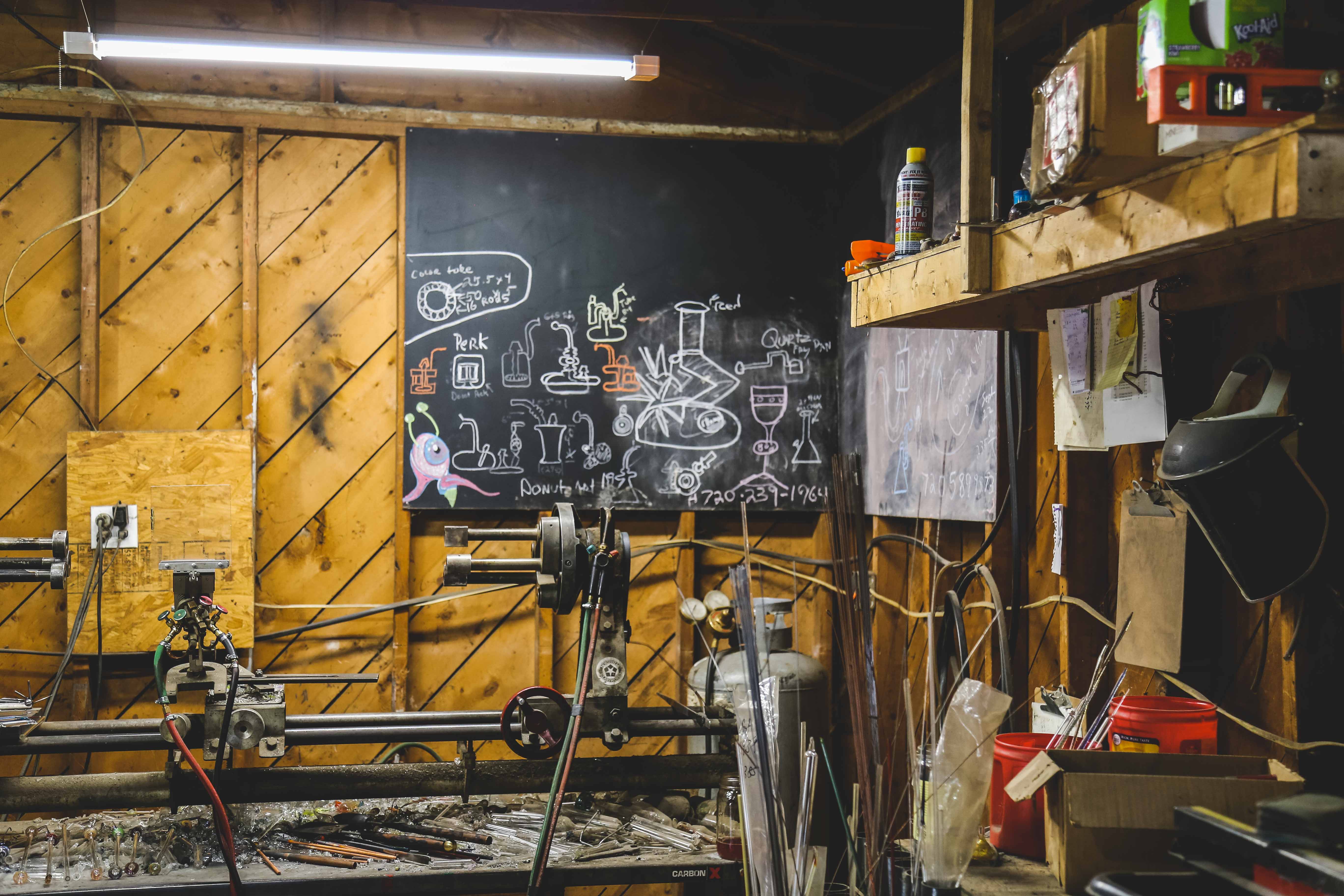 The lampworking studio, broken pieces scattered under the apparatus.

Jonathan shapes his glass pipes without ever sketching any drafts or plans. His designs are inspired by a life philosophy based on “Pi, Phi and Fibonacci,” as he explains it. What this means is that he’s inspired by sacred geometry and the patterns that result from a combination of certain numbers. The finished products are saturated with symbolism that speaks deeply to Jonathan. His hopes are that people who feel attracted to that symbolism will appreciate the energy he extended into making the piece and see it as a work of art.

Both Don and Jonathan are fulfilled by their work. Sometimes they will spend 12 or more hours in the garage, working with the flames and glass. They don’t spend much time with their finished pieces, as they are boxed and sold to headshops all around town almost immediately after completion. Jonathan keeps a few display cases of his most time-consuming pieces at Rigs 4 Us, which are not for sale (and if they were, they’d have five-figure price tags), but their production pieces are for sale if you ask for Phantom Glass pieces.

Using lampworking to create glass pipes is kind of like using the force. It’s an act of alchemy, where the artist must harness some of nature’s ferocious energies to forge and transform materials into new shapes. There seems to be a spiritual component to it, where the maker must learn from the material and also be able to impart their own wisdom onto it. And maybe it’s because the whole process takes a lot of standing in one spot, staring into a small area, but Don and Jonathan are contemplative and magnetic artists who embody the fluidity and grace of flameworking. 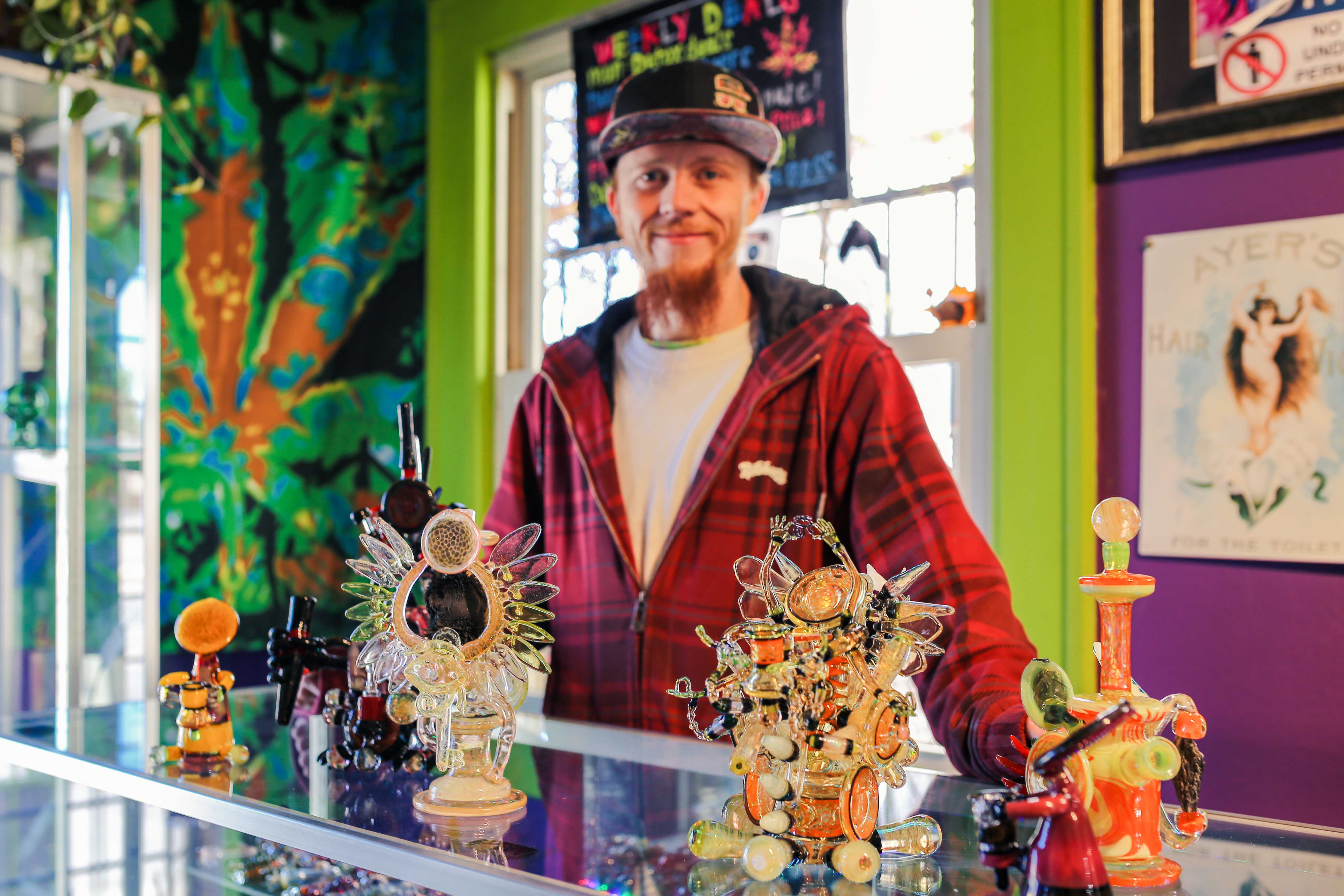