In 2012, Carnivale de Sensuale was just a one-off Halloween show produced by Scott Happel as a stepping stone towards opening his own haunted house. Now, Carnivale de Sensuale has become one of Denver’s biggest variety shows taking place four times a year in celebration of the changing of the seasons at the Oriental Theater. This past weekend, March 24 and 25, the two-night Spring Equinox Celebration brought in some of Denver and beyond’s best burlesque and sideshow acts.

Carnivale de Sensuale has become known for hosting some of the loudest and most responsive audiences on the variety and burlesque show circuit. This can only be due to Happel’s keen sense in selecting the most entertaining of acts and compiling them with mix-tape-like precision from opening to closing. 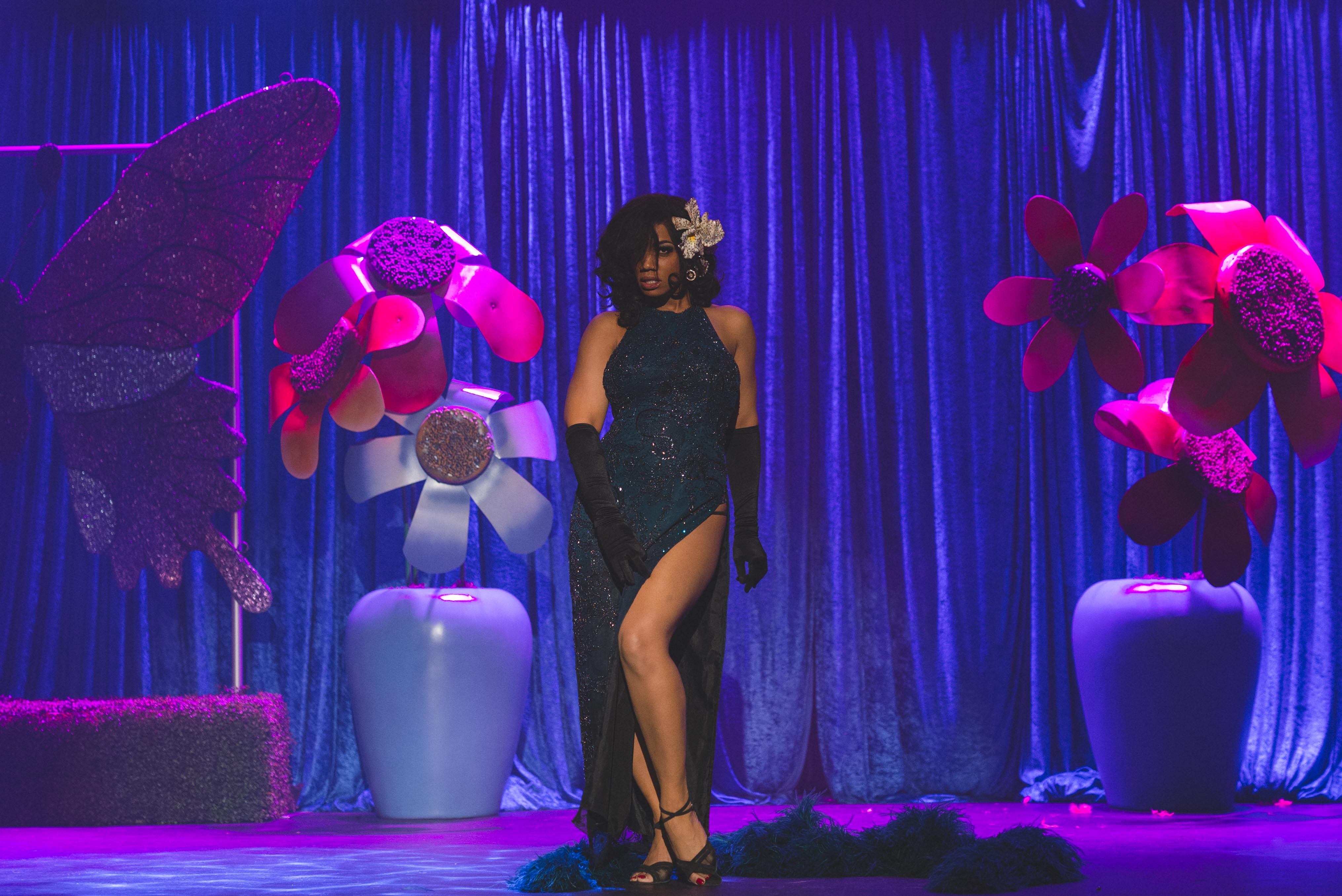 The Spring Equinox Celebration opened with a bang both nights as a drum and horn marching band blasted their way down the aisles, led by Denver’s multi-talented musician, Wes Watkins. The band’s rendition of Macklemore and Ryan Lewis’s “Thrift Shop” turned into a full-stage musical act featuring a duet with Happel, in character as emcee Hagbard Celine, and Watkins. It was the perfect high-energy, crowd-pleasing way to launch each evening’s eclectic show.

Every act that followed brought something uniquely entertaining to the Oriental Theater’s stage and was perfectly mixed to bring the audience along a roller coaster ride filled with sensuality, comedic energy and delightful sideshow entertainment.

Read below for a glimpse of the eclectic variety brought together at Carnivale de Sensuale’s two-night Spring Equinox Celebration. 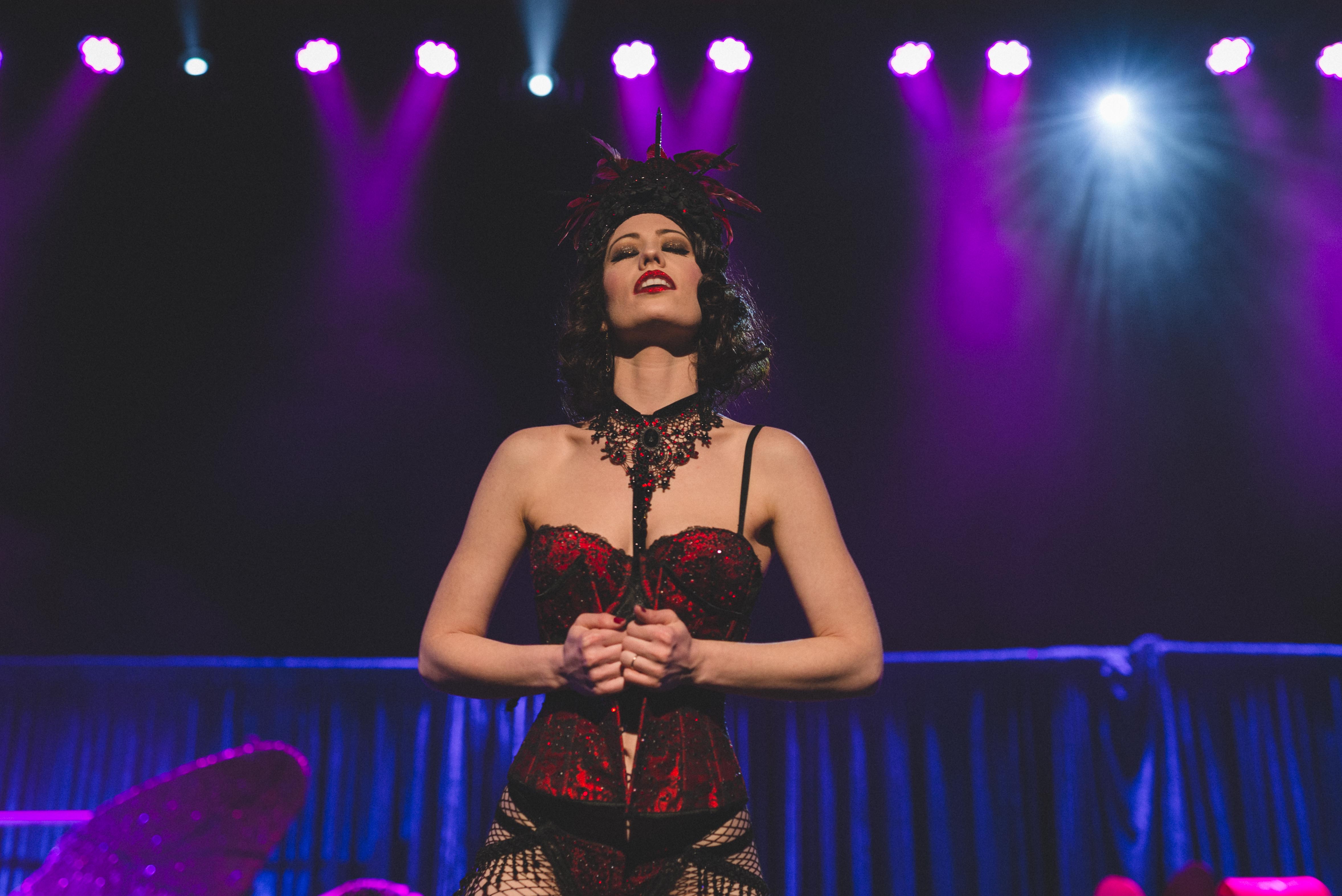 Vyla Vaudette brings the sensuale to carnivale at the Oriental Theater in Denver.

Local performers from all over Colorado came together to put the sensuale into the carnivale over the two-night festival. A bevy of beautiful ladies bedecked in rhinestones teased their way into the audience’s hearts as they performed classic and neo-burlesque acts upon the brightly decorated stage.

Among the giant sculpted flower pots that adorned the stage, titillating performances from some of Colorado’s burlesque greats such as Miss Mimosa, Chairmyn Meow, Laika Fox, Penny Spectacular and Honey Heartbreaker wowed the audience. Kitty Crimson and Dirty Duvel both gave stunning solo performances, as well as coming together, with Cherry Pop Pop Poppins to form their group act, known as Dirty Crimson Cherry. The trio performed their award-winning act from the recent Las Vegas Sin City Burlesque Festival to raucous applause. 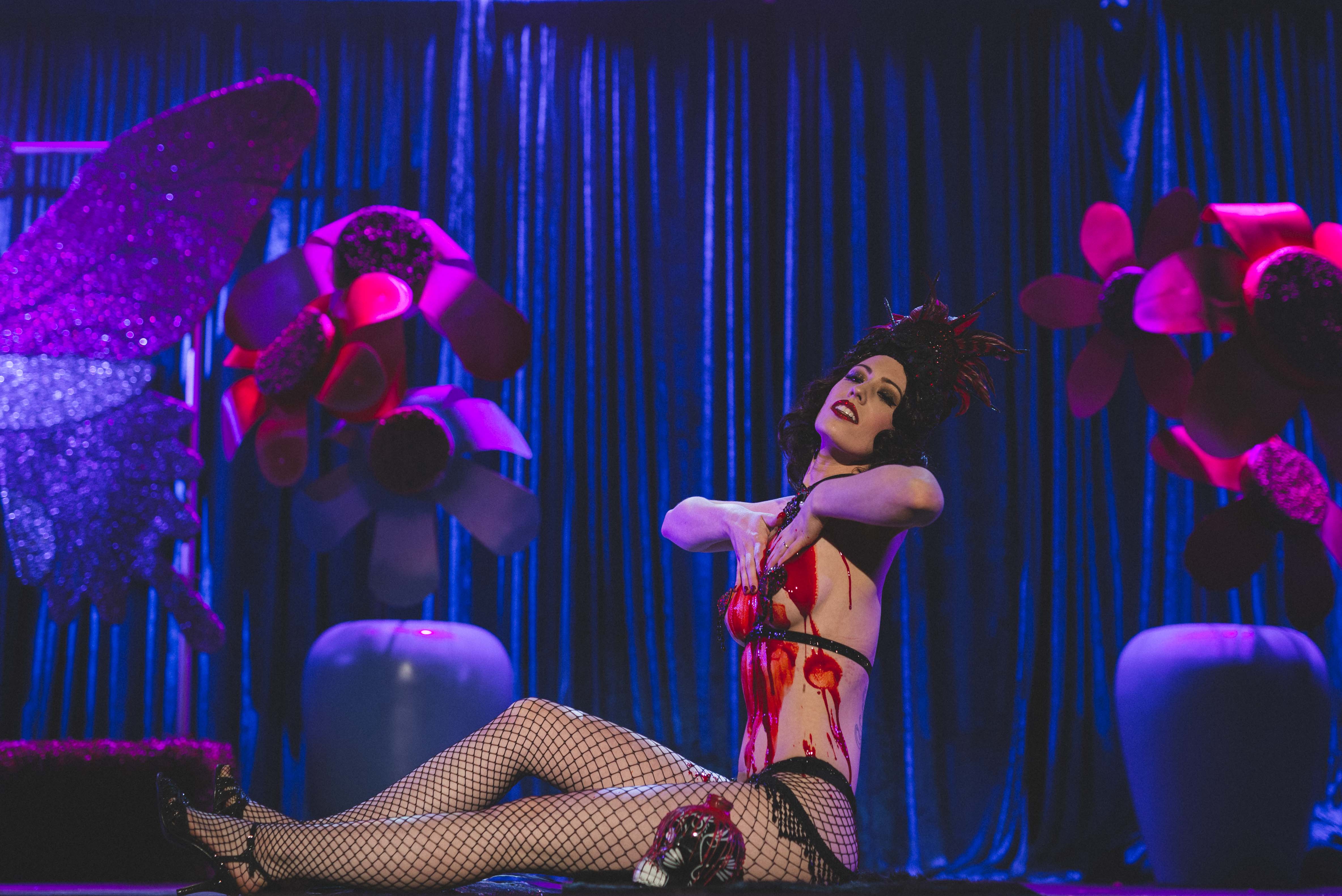 Burlesque performer and vintage model, Vyla Vaudette of Denver’s Vanity Dollz, gave the audience a peek at the darker side of burlesque with a bloody twist to the end of her elegant solo performance. 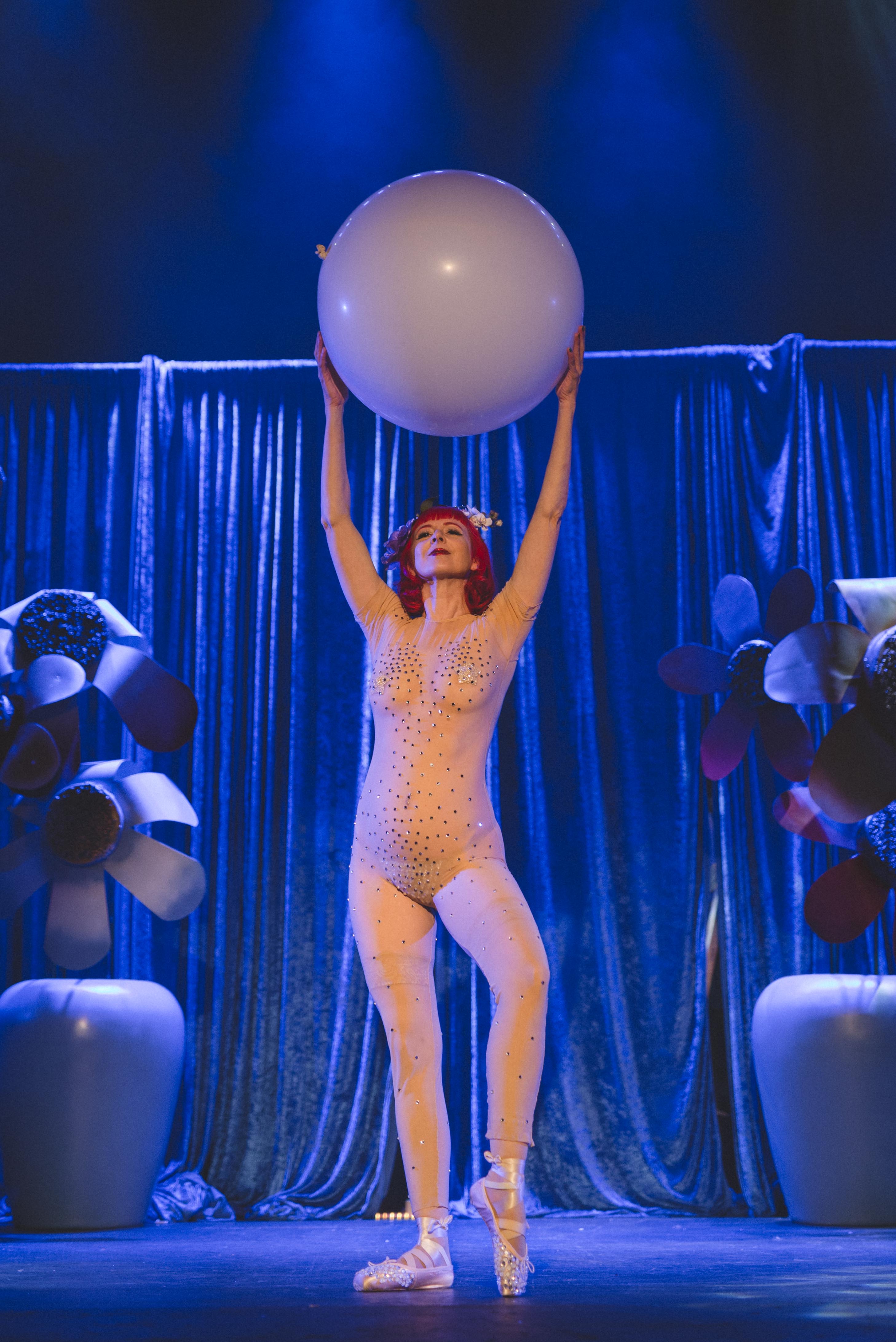 Honey Touche is on point and bedecked in rhinestones at Carnivale de Sensuale.

Honey Touche, Denver’s sweetheart of burlesque, showed off her classical ballet skills as she whimsically danced with enormous balloons in pure spring revelry. 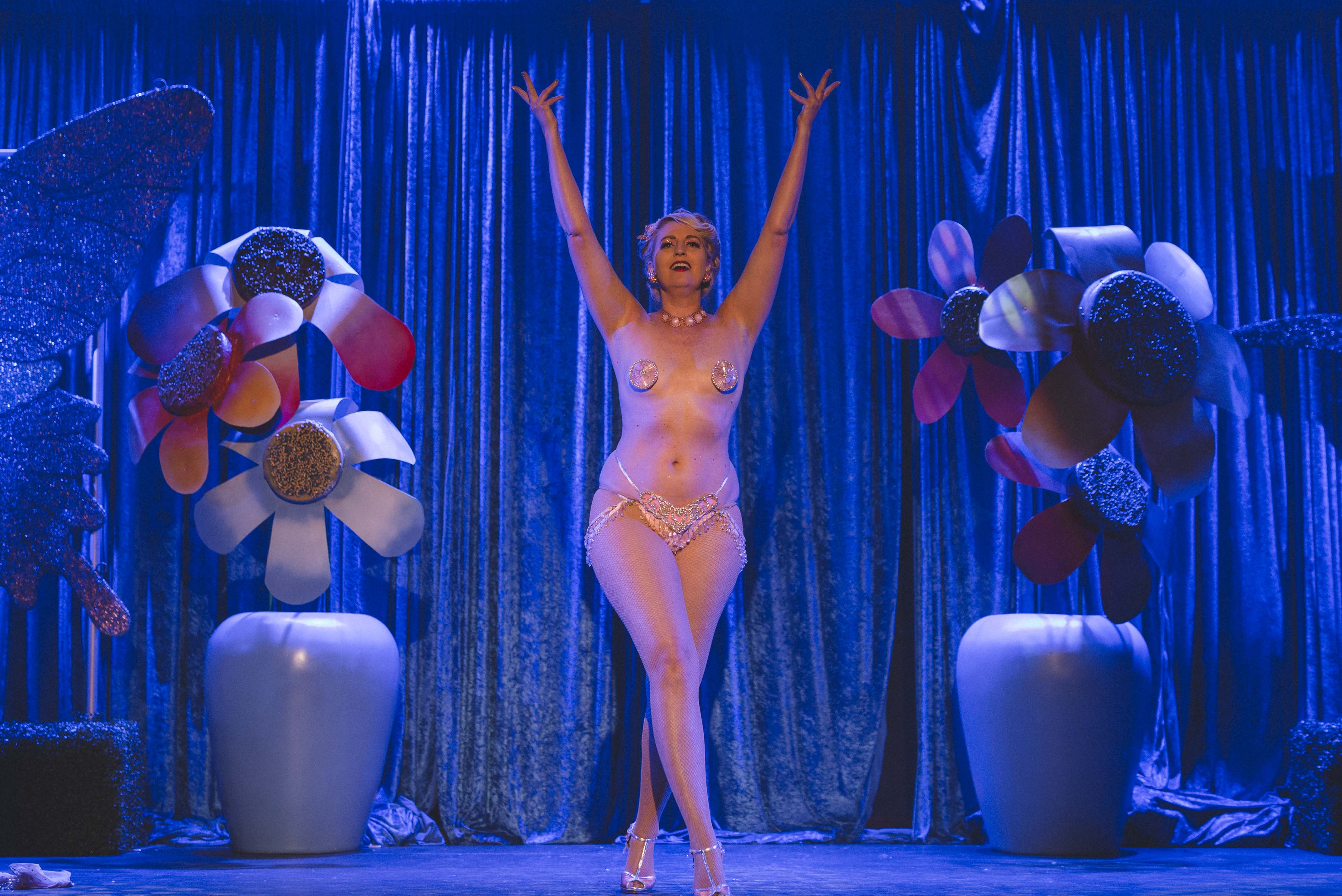 Featured performer and Denver’s queen of the classic bump and grind, Vivienne VaVoom sizzled on stage with two solo performances over both nights.

The classic and neo-burlesque acts of Carnivale de Sensuale heated up the stage with a mix of elegance, grace and fiery pagan passion in celebration of the spring equinox.

What’s a little tease without a dash of humor? Carnivale de Sensuale not only gave the audience the satisfaction of seduction, but several burlesque acts also pulled out hilarious comedic punches. Among the playful, tounge-in-cheek performances were those of Betsy Bootknocker, Darla Cherry, Evangeline Cain, and Lady Peacock. Bootknocker hatched her way out of a giant egg and into a comedically sexy number covered in a yellow feather duster. Cherry played up the birth of spring revealing her own pregnancy in a hilariously adorable solo. Cain showed the audience her playful kitten, while Peacock searched for her flock of sheep, played by Jiji De Luge, Fuchsia La Fae, Maya Tetons, Polka Dottie and Dagny Vanderlust. 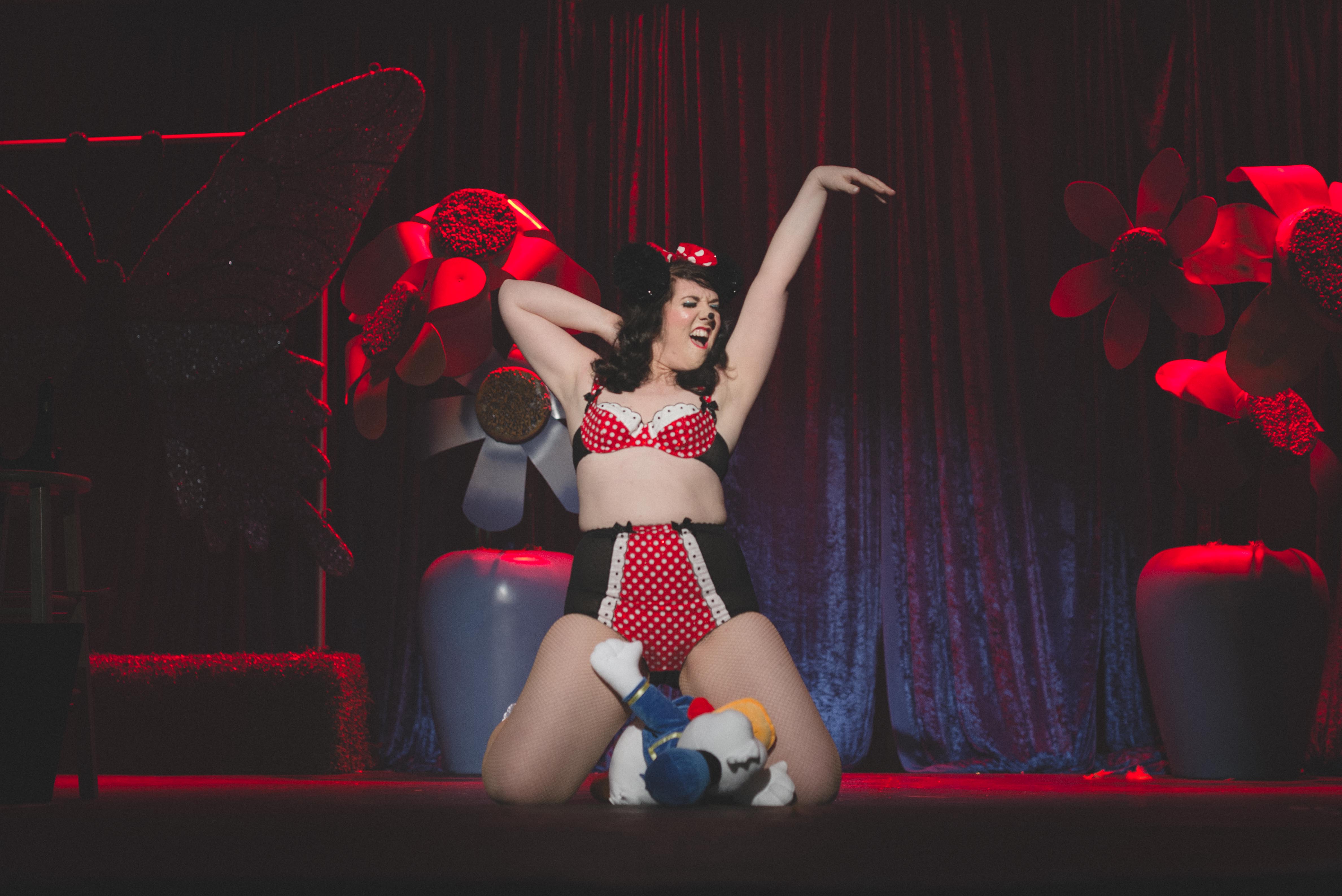 When Denver’s Polka Dottie wasn’t busy being a part of Peacock’s wandering herd, she was turning the audience’s childhood memories upside down with her Mickey Mouse Club-inspired solo. Dottie’s Minnie Mouse-like costume was impeccably detailed from the top of her mouse ears down to the bows on her shoes. The solo began as a fun number to the familiar chant of M-I-C-K-E-Y-M-O-U-S-E and quickly devolved into an entertaining romantic interlude between Dottie and a stuffed Donald Duck to the tune of Marvin Gaye’s “Let’s Get it On.”

Carnivale de Sensuale is known for bringing more than just burlesque acts to each of its seasonal celebrations. The Spring Equinox Celebration also included various sideshow acts, aerial performances and a bit of mentalism. Staza Stone, an aerial instructor and performer who has performed with MOTH Contemporary Circus, Gravity Aerial Arts and Phantom Circus spun in the air to the Pixie’s, “Where is my Mind.” On the aerial silks both nights, was Nadja Tizer of Firebird Moving Arts. And adorning the Oriental Theater’s ceiling were Phantom Circus performers, Natalie Brown and Katie Mesmerie Brunner, as they artfully dangled from their original chandelier apparatus. 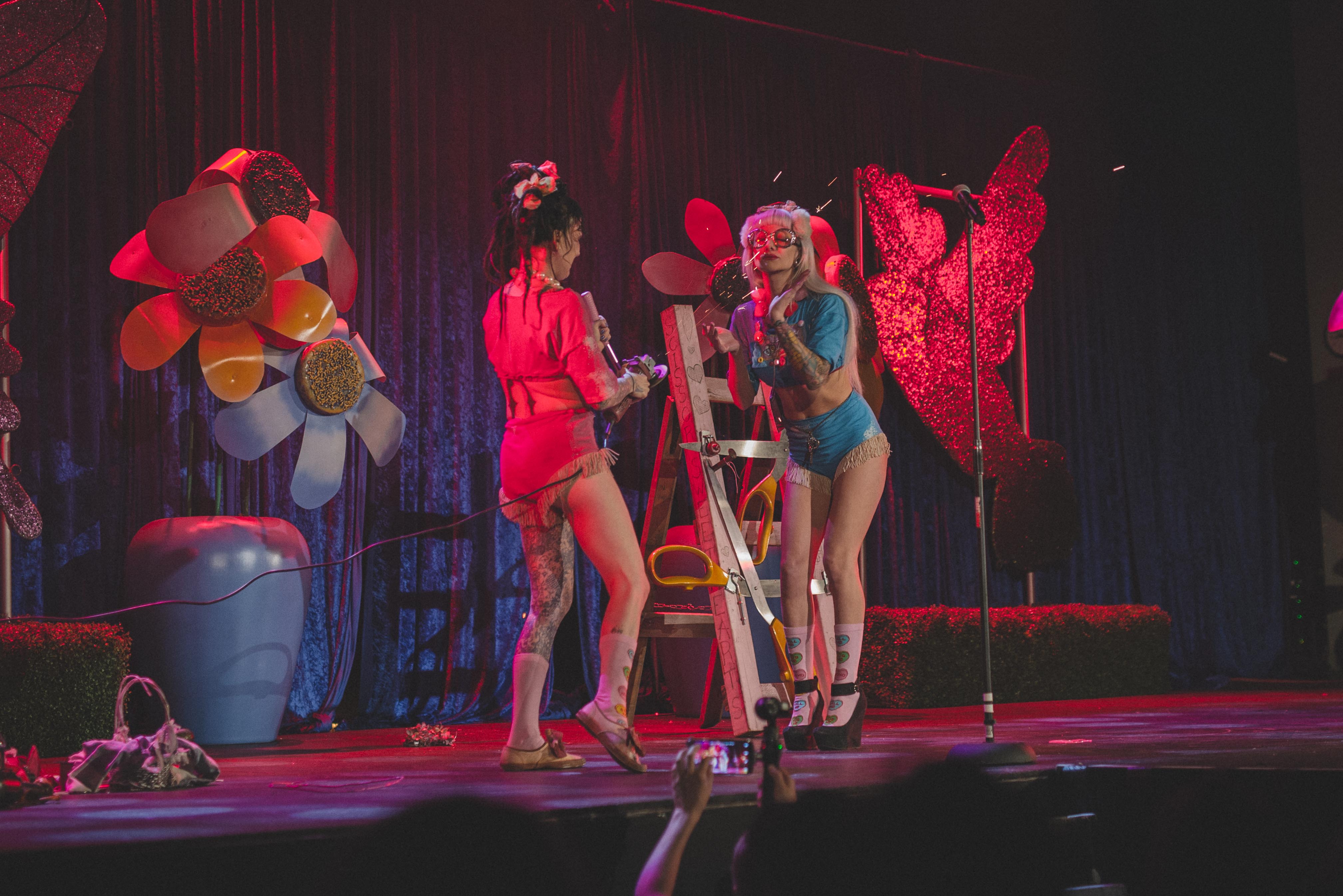 The Scissor Sweethearts are sharp, snippy and playful onstage at Carnivale de Sensuale.

Miss Claire Voyant, the mistress of mentalism, delved into the audience’s psyche performing intricate and magical feats of mind-blowing proportions. 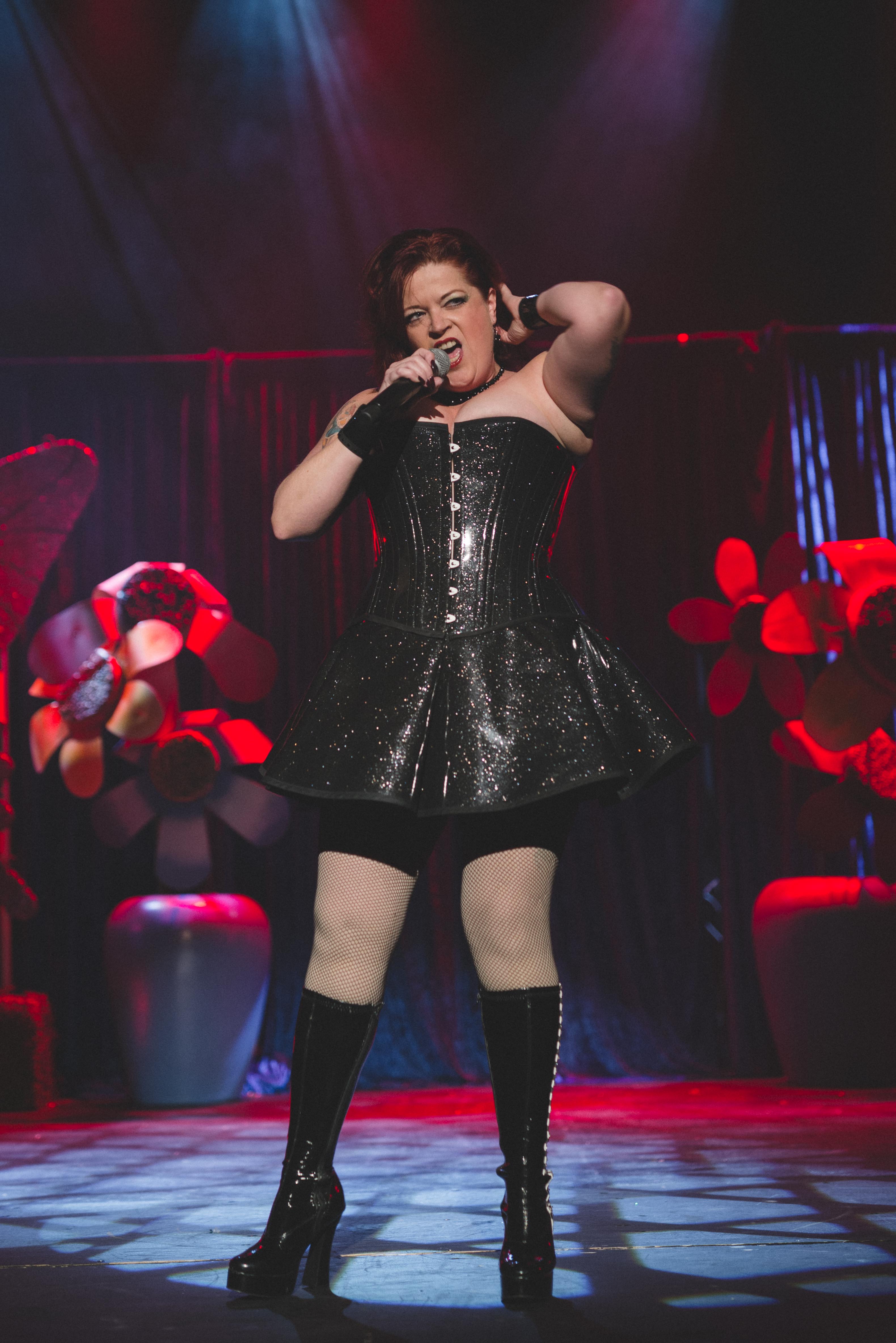 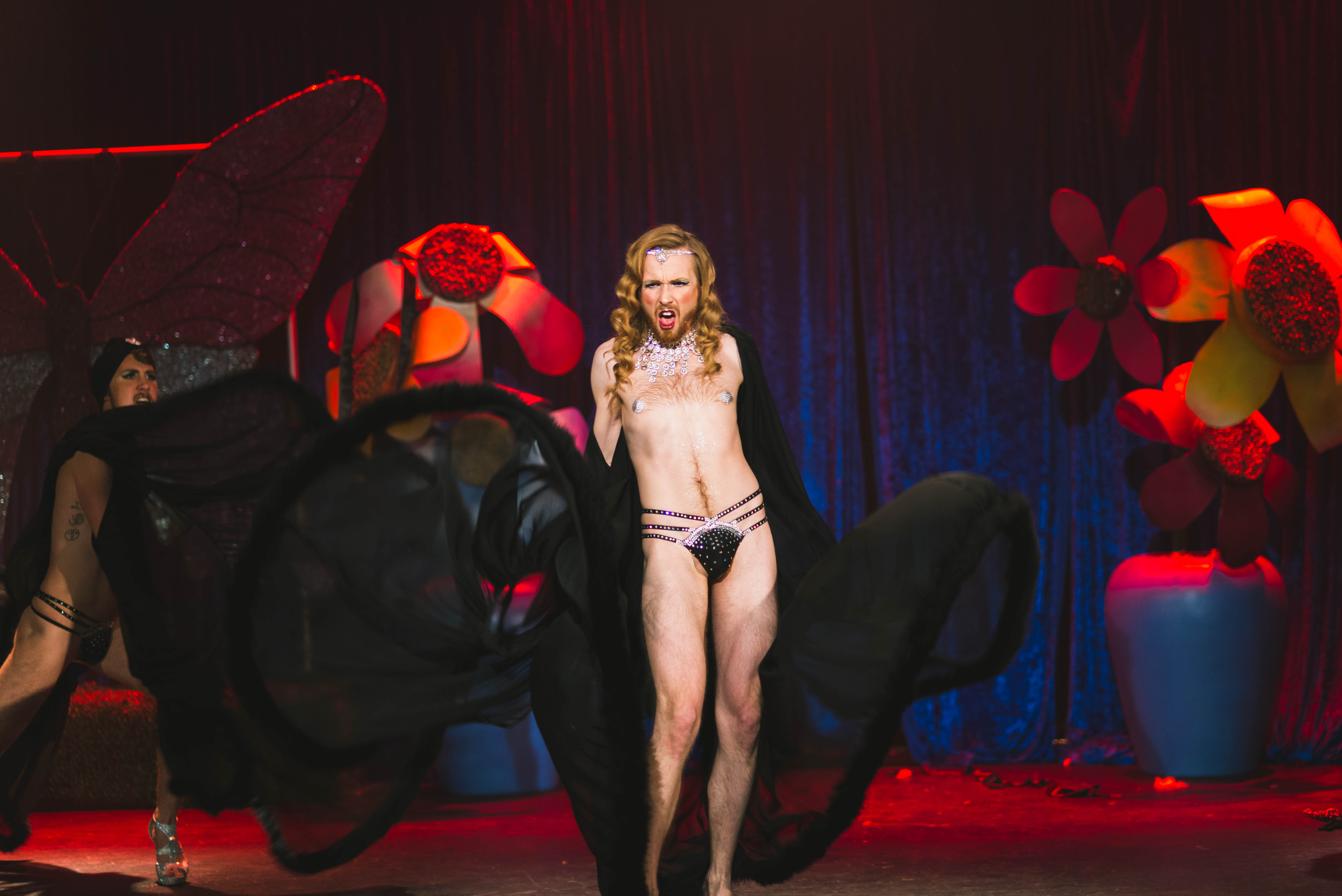 No burlesque show is complete without a few good men. Carnivale de Sensuale featured some of the hottest men of Denver’s boylesque scene in its two-nights of revelry. Jojo Torrent performed his Evil Kenevil-inspired boylesque chair act as the audience watched with bated breath as every piece of costume fell to the floor. And Sledge Hammah showed the audience just how provocative a handyman can be. 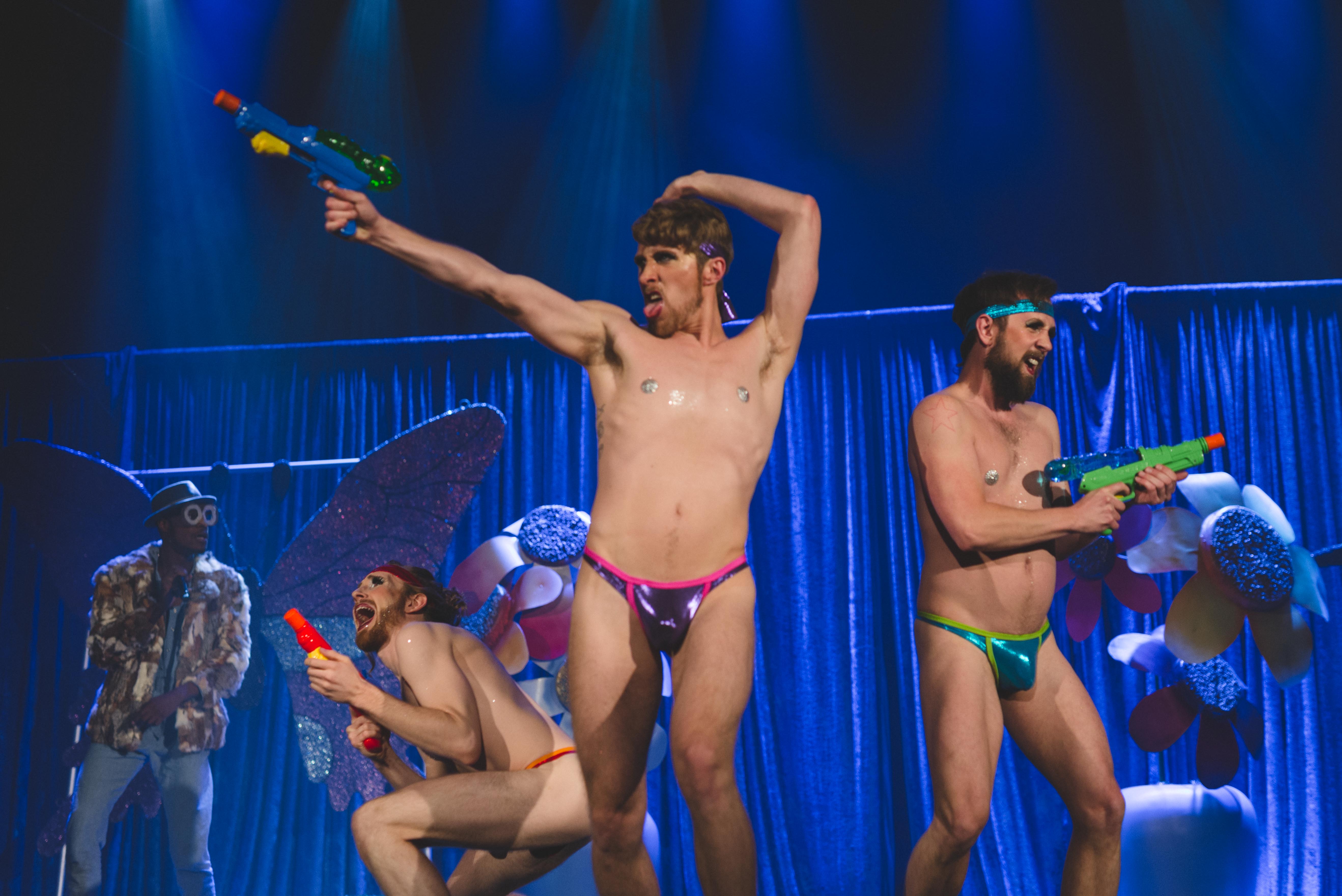 Burning Loins Boylesque gets the audience wet with one of their group acts at Carnivale de Sensuale.

As if one man onstage wasn’t enough, boylesque trio Burning Loins, gave the audience three. Denver’s Indy Fire, Bender Flames and Charlie Valentine make up the featured group act that is Burning Loins. The trio has been setting stages on fire for over a year in Denver and beyond. Judging from their immaculate group performances at Carnivale de Sensuale, they will continue to do so for a very long time. Burning Loins is the exact right mixture of perfect choreography, innovative vision and out-of-this-world costume design. Each of their group acts were received with the kind of enthusiasm that proves, yes, Carnivale de Sensuale can rightfully boast one of the loudest and most responsive audiences in the burlesque and variety circuit.

The Queen of Spring

This year’s headliner of Carnivale de Sensuale was none other than the reigning queen herself, Poison Ivory. Ivory was crowned Miss Exotic World – Queen of Burlesque 2016 at the Burlesque Hall of Fame (BHOF) in Las Vegas and has been touring the world ever since. Ivory came to perform in Denver for the first time straight from featuring in Alaska’s second annual Freezing Tassel Burlesque Festival. She closed out both nights of Carnivale de Sensuale with her BHOF title-winning act as well as giving Denver the added treat of two bonus solo performances. 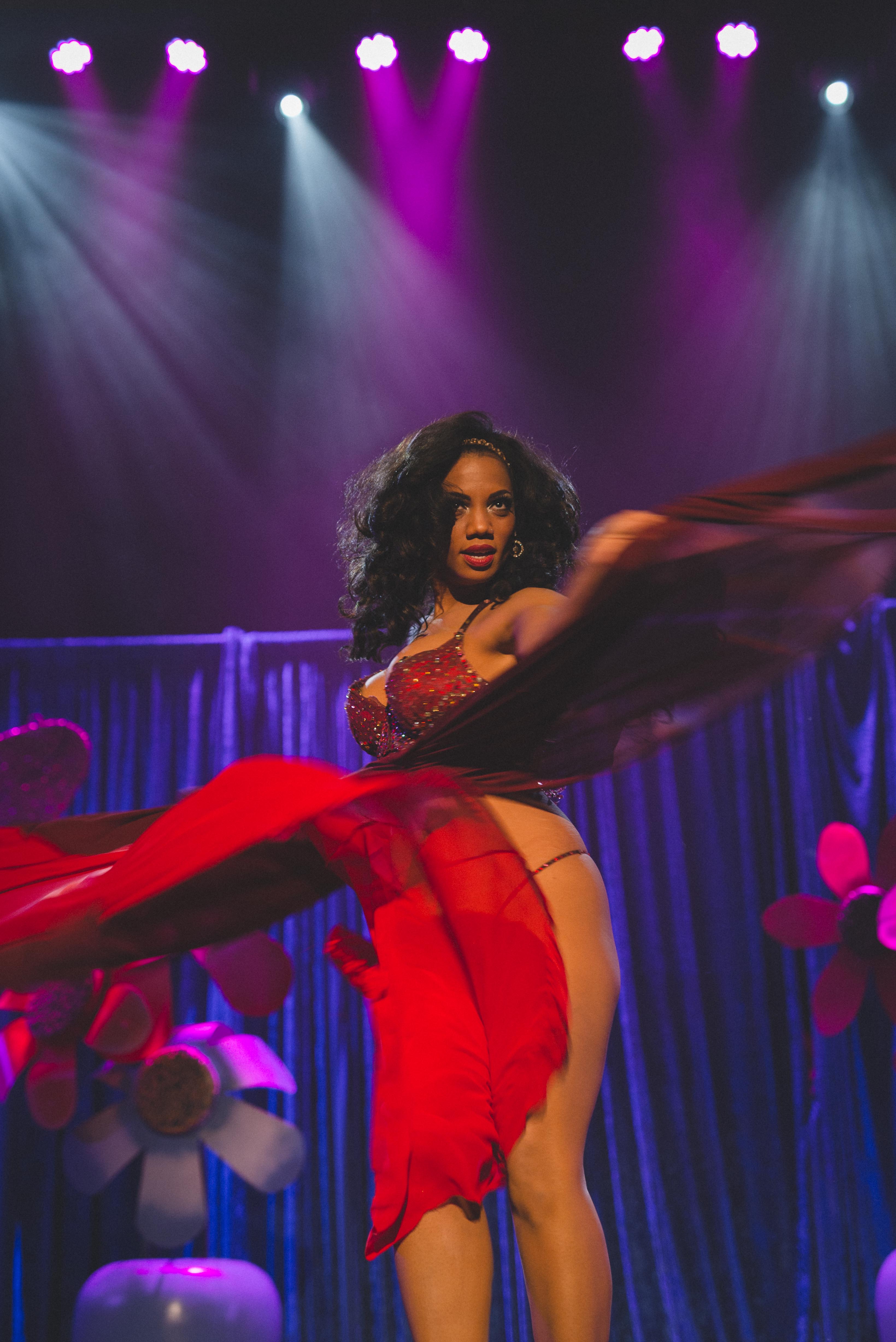 Each of Ivory’s acts pulled the audience in like no other, proving exactly why she is the queen of burlesque. The exquisite precision and fluidity in her movements were equally matched by her ability to plug into an otherworldly electric energy. As her performance climaxed, her connection with the audience exploded into uproarious applause. Ivory’s goal is always to inspire audiences, and she did just that and more as she reigned over Denver as the queen of spring at Carnivale de Sensuale. 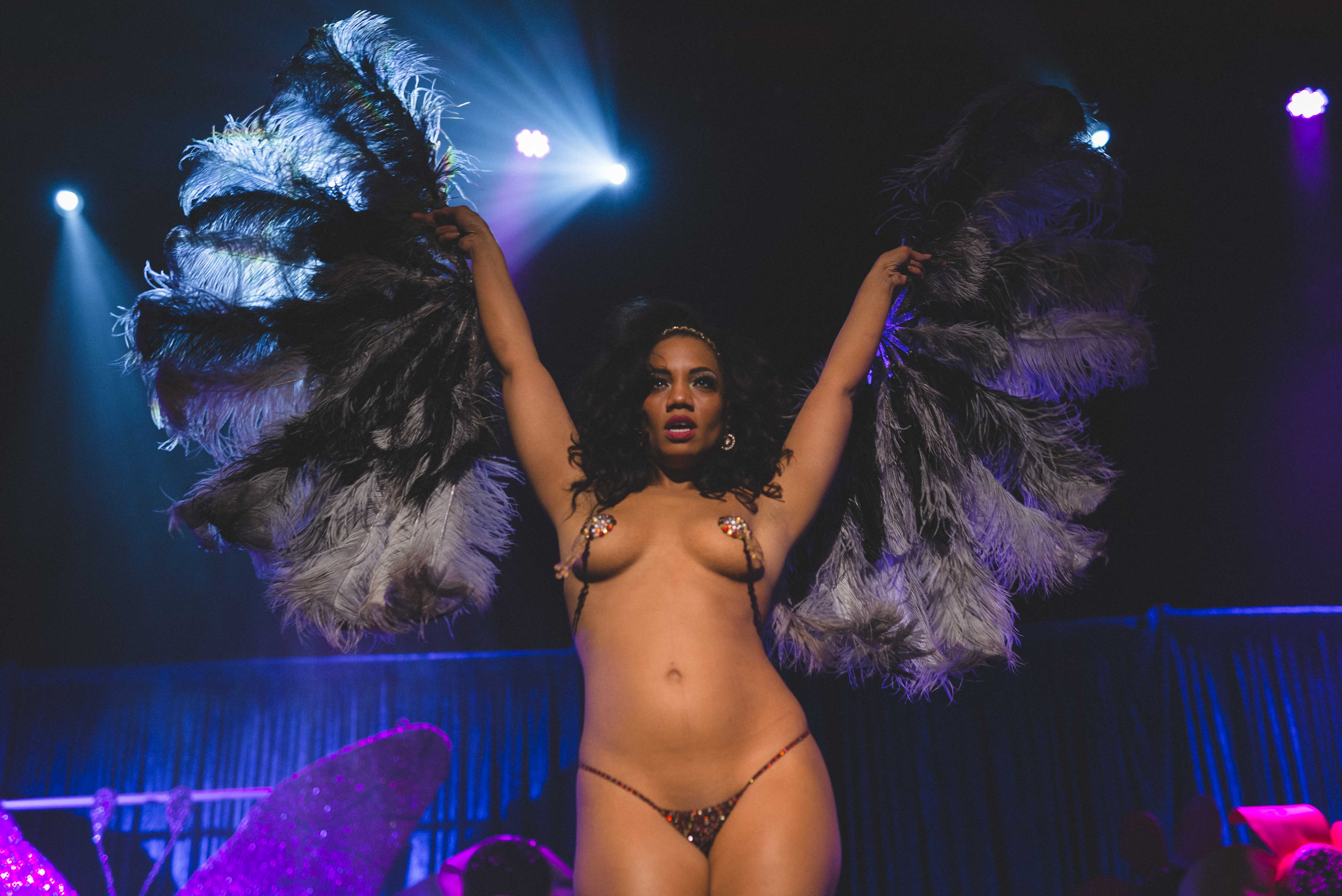 All photos by Alden Bonecutter Photography.