Carnivale de Sensuale is kicking off its two-night Spring Equinox Celebration by bringing its modern twist on the classic traveling carnivals of the ’20s and ’30s back to the Oriental Theater March 24 and 25. Since 2014, Carnivale de Sensuale has been ushering in the four seasonal changes with an eclectic cast of aerialists, magicians, psychics, freak show and burlesque performers. Each show varies widely from one to the next and features a different headliner.

This spring’s headliner at Carnivale de Sensuale is none other than Miss Exotic World – Reigning Queen of Burlesque 2016, herself, Poison Ivory.

303 Magazine had the opportunity to talk with Poison Ivory about her whirlwind adventure from her humble beginnings to her crowning glory. Read on to hear her story. 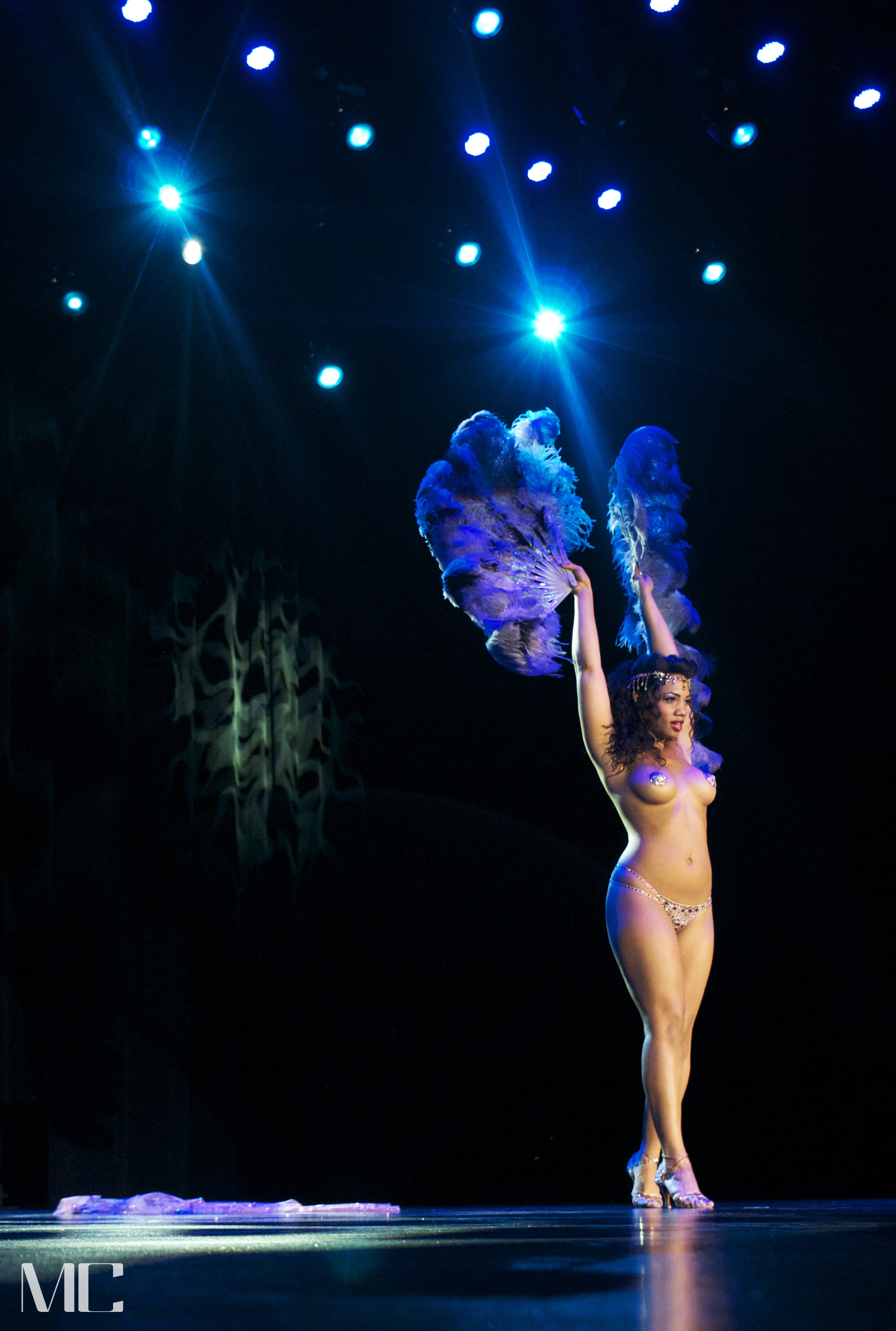 Poison Ivory grew up in California. Her family struggled to make ends meet and had very little time or finances to devote toward fueling her innate passion for theater and dance. She took a few community theater classes, but was unable to immerse herself into theater until high school.

“Theater, for me, was more of an escape from my home life, because I didn’t have a very stable upbringing. That’s what drew me to [theater]. I felt like whenever I was onstage, I was able to escape a bit,” Ivory said.

High school is also where Ivory was given exposure to different dance forms through weekly instruction in various styles. As Ivory continued on to college, she carried with her her passion for dance. She took up partner dancing in the form of both traditional and Latin-based ballroom dancing.

“I had a brief introduction to everything that they do on Dancing with the Stars, basically,” Ivory said.

“That is where I got my love for being on stage and performing and stopped being so self-conscious,” Ivory said.

In addition to attending college and exploring dance, Ivory and her partner started to become serious. The relationship began to overshadow her desire to perform, go to school, or pursue anything artistic at all. 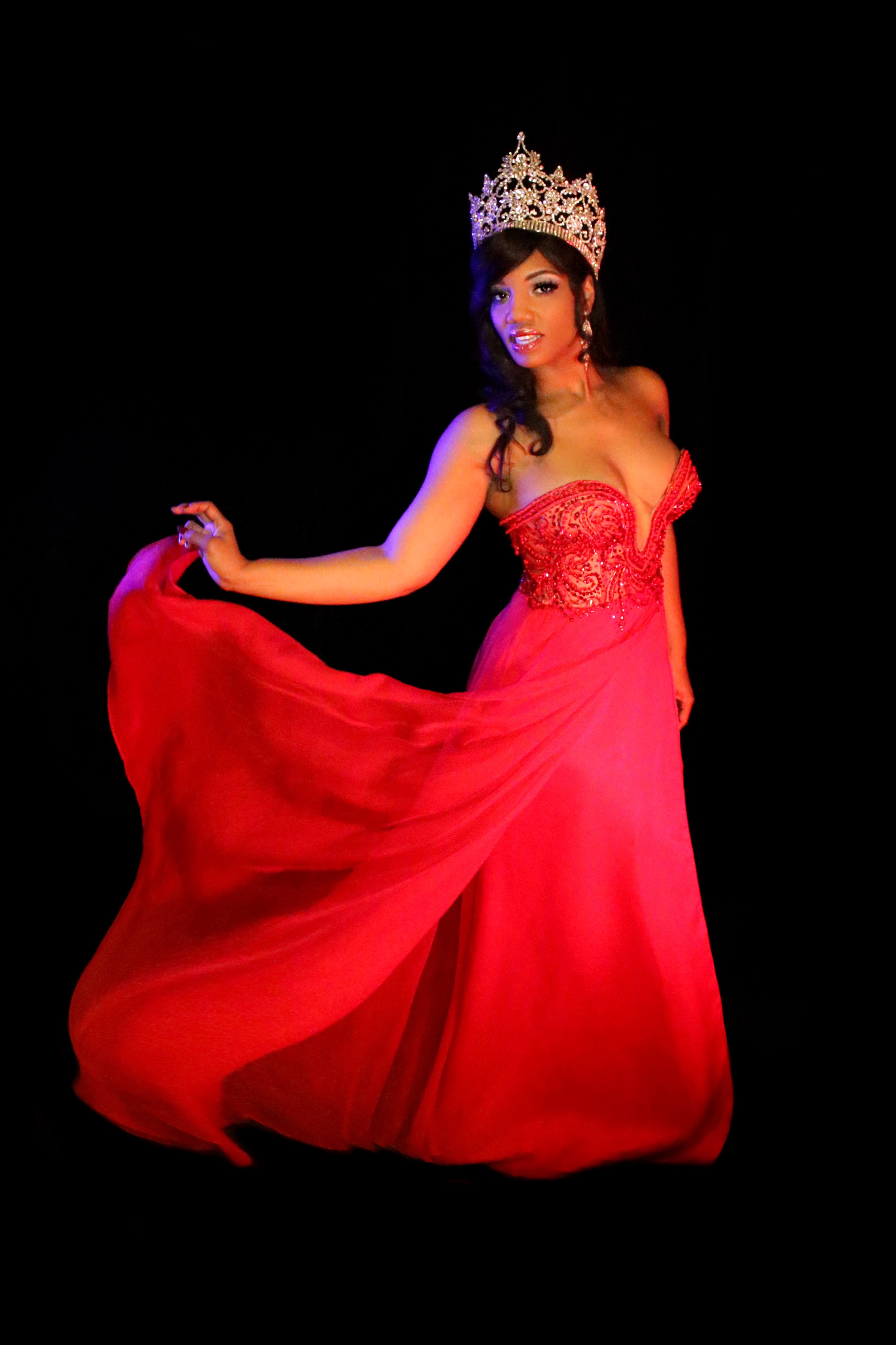 Over time, Ivory began to lose sight of herself. The dreams of theater and dance were quietly being suffocated by a continued toxic relationship and the daily hustle of paying bills and surviving. In 2009, Ivory’s friend from college, a studio art major who had landed a gig working for Project Runway came to stay with her while working on the show’s sixth season set in Los Angeles.

Ivory was on summer break from her latest job as a teacher and agreed to fill in as an assistant to her friend.

“It was great and I wound up staying on the show for the full season,” Ivory said. Season seven moved back to New York. However, as Project Runway began its eighth season, they requested Ivory return to help with the production. Ivory worked for five weeks in New York helping to build the sets and decorate the apartment. The show filmed for a month following the setup and then Ivory returned to disassemble the set.

“Coming to New York for those few weeks was the first time, in maybe, five years that I was separated from my ex at all. When I was in New York I started to feel like the old version of me again,” Ivory said.

With this new-found realization that she was far from being the person she once was, full of theatrical passion, Ivory returned home to end the relationship, pack her things and start living the life she dreamed of. On October 12, 2010, with just one suitcase and $250 in her pocket, Ivory returned to New York to make a new start for herself.

That winter was Ivory’s first New York winter and her first time experiencing real snow fall. It was also the first time she realized that she suffers from Seasonal Affective Disorder. While she was battling fierce depression, Ivory took refuge in the offerings of Netflix. Among these offerings, Ivory stumbled across the documentary, A Wink and a Smile, which followed the lives of 10 women learning the art of burlesque in Seattle.

This sparked something in Ivory that she hadn’t felt in a very long time. “I wasn’t necessarily interested in burlesque, but I was really interested in feeling good in my own skin again and finding myself,” Ivory said. 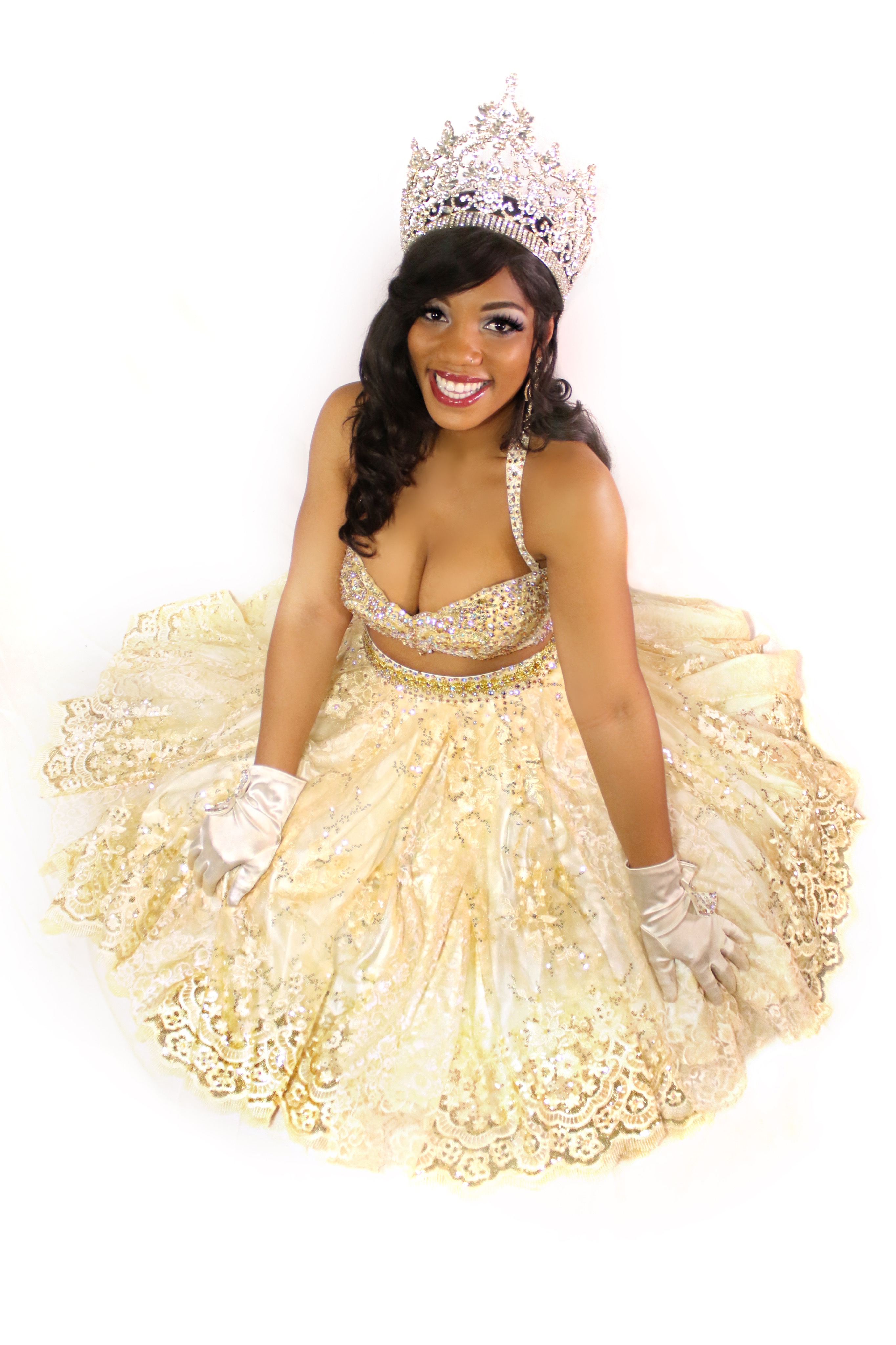 Poison Ivory, a burlesque queen in the making. Photo courtesy of Poison Ivory.

Over a year passed for Ivory since that spark was ignited within her. Often times, there is no better fuel for fire than that of a best friend who sees the potential within.

“My best friend came to visit me in New York for my birthday and she stayed with me for a month because she had a job she was doing out there,” Ivory said.

Ivory made her watch the documentary. As a birthday present, her friend signed Ivory up for classes at the New York School of Burlesque.

“Two weeks into the classes, we were learning tassel twirling and I remember having this thought of how proud I am of my boobs. I didn’t know they could do those tricks. It was a silly thing, but it was the first time that I had some pride in my body and my appearance,” Ivory said.

It was announced that a student showcase would be on May 26, 2012 and as her friend was so encouraging and wanted to see Ivory perform, Ivory decided to make her burlesque debut in the showcase. As another birthday present to herself, Ivory took a trip to London after the performance.

Impressed with Ivory’s debut performance, her friend took the opportunity to attempt to lineup burlesque gigs for Ivory. Submitting last minute, a cell phone video of Ivory’s performance from the student showcase along with a cell phone head shot to the New York Burlesque Festival’s Star Search competition. First and second prizes would include the opportunity to perform in the New York Burlesque Festival. Ivory was accepted into the competition.

Upon returning from Europe, Ivory had a little over a week to prepare for the Star Search competition. Needing more stage-time under her belt to build her confidence, she performed for a nudist group and also with Wasabassco Burlesque.

Ivory’s long-time inspiration, Perle Noire, was a featured performer at the Wasabassco show. Noire gave her a bit of advice, “I’m just gonna tell you, the only thing I can say is if you’re gonna raise your arms, you need to raise your arms.’ And she did this very dramatic arm gesture. What she was saying is, fully commit. If you’re going to get on stage, fully commit. So that’s what I did,” Ivory said.

She would have three performances under her belt by the time she tied for second place in the Star Search competition, landing a place at the New York Burlesque Festival where she was nominated Hottest Freshman.

After that, the awards kept piling in for Ivory through her commitment, professional attitude and innate ability to connect with audiences. Ivory was crowned Miss Starlet Burlesque at the 2013 Hollywood Burlesque Festival and took the first place Crystal Corset Award at the 2014 Pennsylvania Burlesque Festival. She was also awarded Most Classic at the 2015 International BurlyPicks finals. 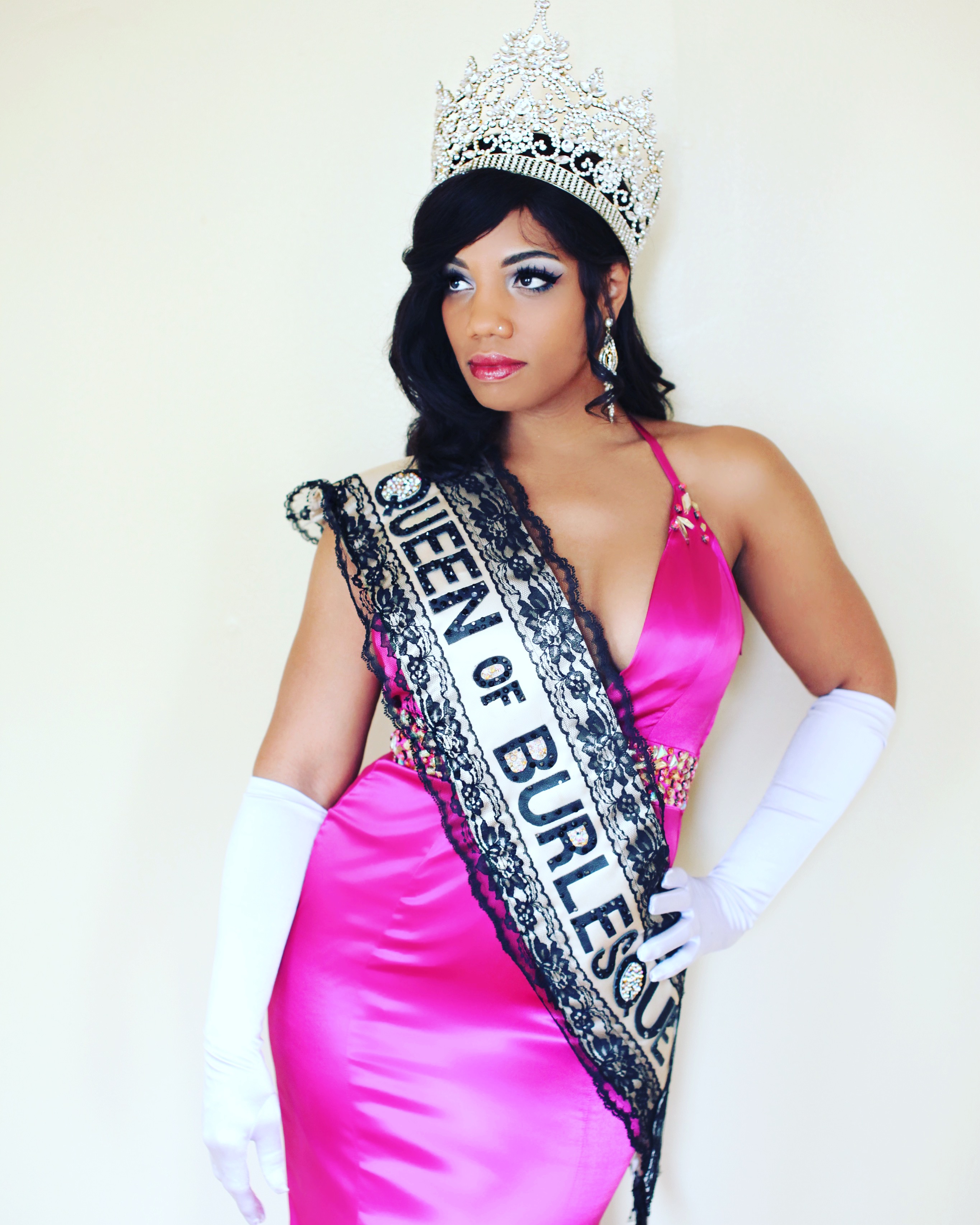 In 2016, Ivory won the much coveted title of Miss Exotic World – Queen of Burlesque at the Burlesque Hall of Fame Weekender in Las Vegas, Nevada. Since then, she has been a fierce advocate for highlighting both the historical groundwork that has been laid by previous burlesque greats as well as what it means to inspire future burlesque generations.

“The goal is simply to inspire as many people as possible,” Ivory said.

For Ivory, burlesque can be a bold, political statement that is inspiring and empowering.

“Every word I speak, every person that I encounter, every decision that I make, I now approach it as a woman who’s bold enough to be on stage naked. It makes other things less scary,” Ivory said.

Ivory will bring her inspirational and bold burlesque acts to Denver’s Carnivale de Sensuale where she will perform twice each night. She will close out both evenings of what promises to be an eclectic and diverse show with her Burlesque Hall of Fame award-winning act.

For more information about the upcoming Carnivale de Sensuale at the Oriental Theater, click here.