The nationally touring Broadway cast of  Fun Home wowed the audience with their debut show on January 11. Not letting the snow slow them down—or the fact their original show was canceled due to the storms—the stunning performance easily exhibited why the musical won five Tony awards. It’s gritty, sweet, nostalgic, slightly controversial and it proves exactly why theater is still relevant. It will be in Denver until January 22 and there is still availability for tickets for most of the shows.

Fun Home is based on a tragicomic graphic novel by Alison Bechdel which explores her relationship with her father throughout her childhood and youth, and especially focuses on her coming out of the closet. The book garnered much acclaim and at the same time created controversy when it was published in 2006, with a public library in Missouri going so far as to ban it for several months because of the “pornographic” content. Many universities use Bechdel’s graphic novel in their curriculum because of the many literary references littered throughout the pages— a technique that allowed for Bechdel and her readers to better understand the dynamics of her family. 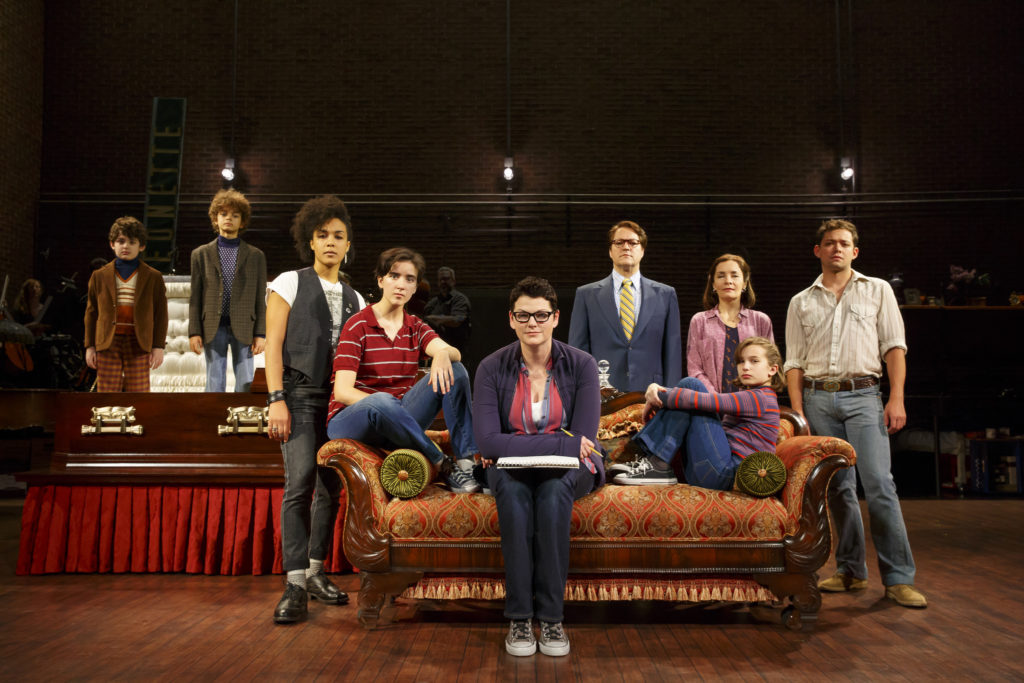 The musical theater production of the show was written in 2012 by Lisa Kron with the Broadway version appearing in 2015, winning those five Tony Awards, including Best Musical.  It’s been said that Fun Home is the first mainstream musical about a young lesbian, which is applaudable but also leaves one wondering—especially with the generally accepted stereotype of a homosexual in theater—why it didn’t come sooner. The performance is poignant with moments that allow for serious internal investigation, regardless of your own sexual orientation. It would be hard to sit through the show and not contemplate your own relationships with your parents.

Narrated by the adult Alison (Kate Shindle)— the “lesbian cartoonist” as she labels herself— and chronicling two different periods in her upbringing with an Alison before her teenage years (Alessandra Baldacchino) and a freshman in college Alison (Abby Corrigan), Fun Home shows how an adult might look back on times in her life with different eyes. It sometimes has a Scrooge feel—where adult Alison is standing, invisible, above the shoulder of her younger self— which works for the story because it portrays so accurately how one can immerse themselves in memories, and ultimately the entire performance is made of scattered memories. 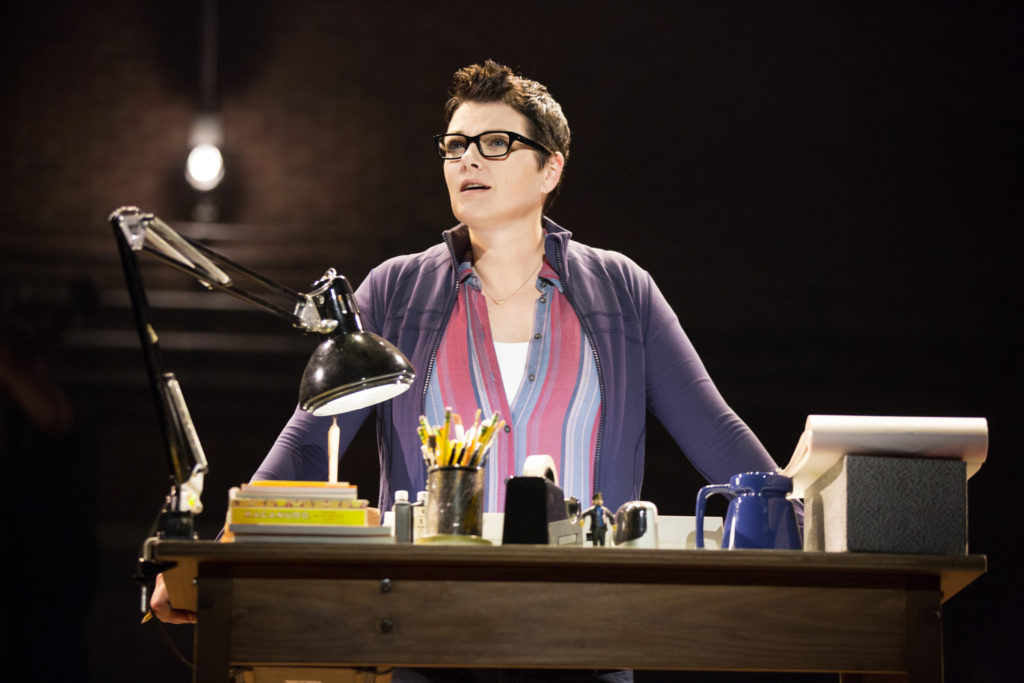 The three Alisons provide a unified picture of one person without copying each other’s mannerisms. Much in the way that each of us change through periods in life, the Alison on stage (sometimes all three at once) portrays a multi-faceted being throughout time. Without an intermission, the atmosphere of the theater remains constant, an unbroken spell which draws you in to the inherent intimacy of what you are witnessing on stage. Sam Gold, as the director, specifically wanted the performance to have an intimate feel because it’s about a family behind closed doors from the perspective of just one member of that family. And the plot is non-linear, just like the graphic novel, which means that each scene leads into one another for a reason that is beyond time. 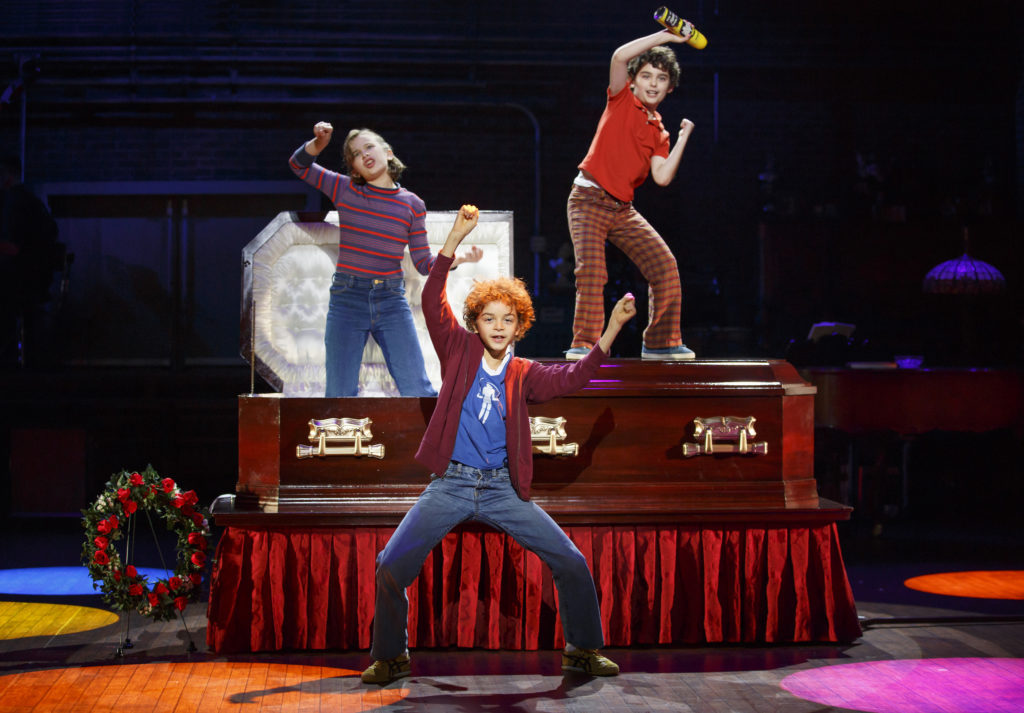 Though the main themes of Fun Home— like sexual orientation, suicide, emotional abuse and dysfunction in the family—are serious, there are some upbeat and truly funny moments in the performance. In the picture above, the youngest Alison and her two brothers are dancing and singing for a make-believe commercial they’ve created for their family’s funeral home. With such youthful candor, the three siblings groove atop a coffin, illustrating the very real coping mechanisms of children in such adult situations. In another moment of the show, college Alison spends her first night with another lesbian and wakes up singing, “I am changing my major… changing my major to Joan, changing my major to sex with Joan.” The pure honesty of that scene obviously touched everyone in the crowd who remembers feeling that way about someone in their life.

With Alison being the narrator and main character, it’s easy to lose yourself in following her presence throughout the show. However, the other members of the cast enrich the performance and the accessibility of the story because they are relatable in ways Alison may not be. Joan (Karen Eilbacher) is a sexy and confident young woman, who aside from being Alison’s “first,” steers her into conversations with her parents about coming out. Alison’s mother, Helen (Susan Moniz) appears more often as an accessory than as a centerpiece, but will pull at your heart strings when she confides about her failing marriage to Alison in a song, admitting “days and days and days. That’s how it happens.” And Bruce Bechdel (Robert Petkoff), provides a pivotal performance with his layered character that changes moods rapidly between timelines, abusive and complex and in denial, yet always fatherly. 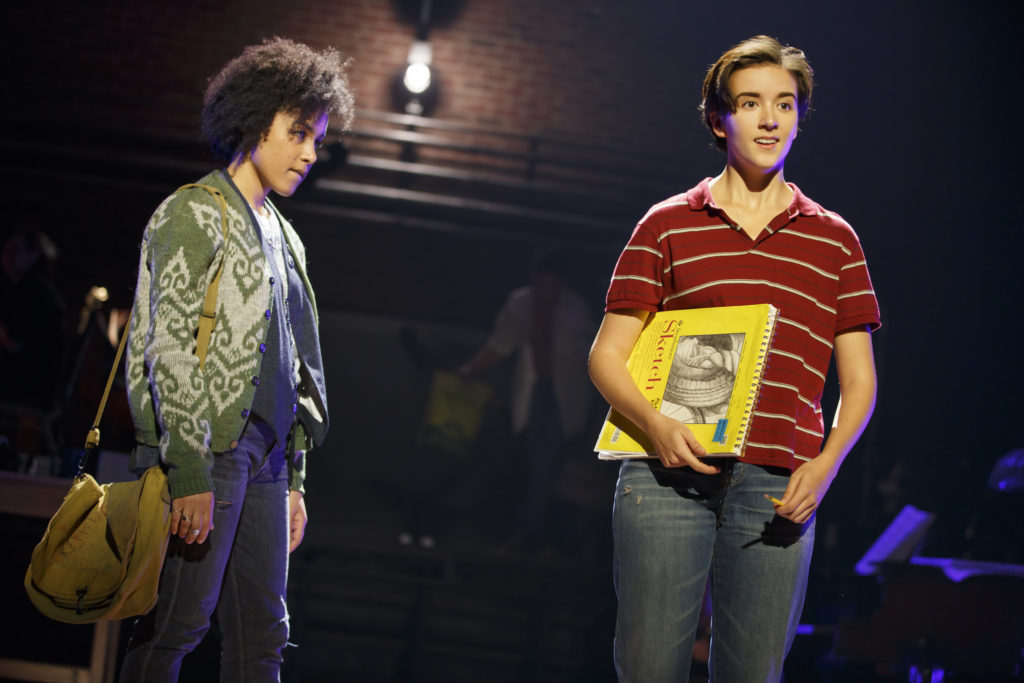 If you’ve read the original graphic novel, seeing this performance is worth it because the adaptation has captured the truthfulness of Bechdel’s cartoons and words and retained the snapshot style as well as the labyrinthine timeline. If you haven’t read the graphic novel, it’s worth it because it will strike you as something real in a world of “reality.” Not to mention there are a few twists to the plot that won’t be spoiled in this article.

In the musical theater world, this show is arguably the most relevant. We all have family dysfunction, to some degree, and allowing ourselves to explore why and how our family is or was dysfunctional might help us to forgive actions in the past and move on. Seeing such authentic situations on stage and knowing that it is based on an actual person gives us permission to be honest, to be inquisitive and to sometimes be confrontational. Fun Home instead of providing an escape into fantasy, takes us inside ourselves to journey through memory and rediscover why we have become who we are. It’s an incredibly personal journey, and Bechdel and Kron and Gold should be thanked for sharing such a thoughtful interpretation. 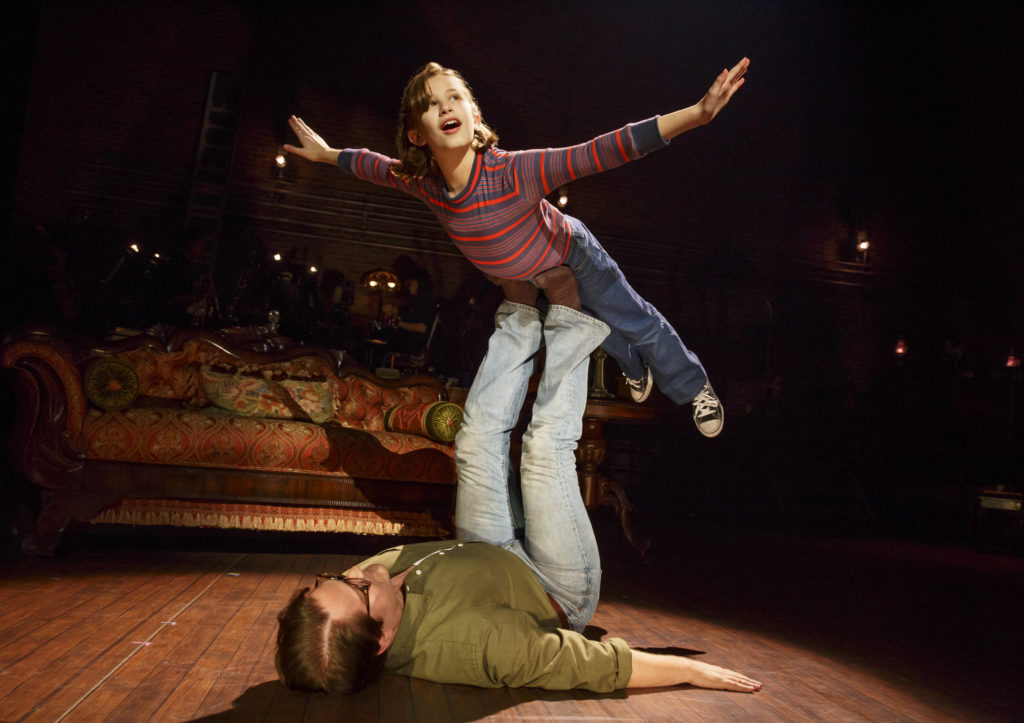 Fun Home will be performing at the Ellie Caulkins Opera House from January 11-22. The performance is one hour and 40 minutes without an intermission and begins at 7:30 p.m. every night.