Before Laverne Cox started her speech, “Ain’t I a Woman: My Journey to Womanhood,” she was greeted by an audience of nearly 2,000 people at the University of Colorado Boulder’s Macky Auditorium cheering and clapping upon her arrival. The title of Cox’s speech is an homage to a speech given by Civil Rights icon and abolitionist Sojourner Truth in 1851 and a book with the same title by writer Bell Hooks. The Emmy-nominated actress and equal rights activist used humor and referenced different activists and authors to tackle topics of trans rights and oppression.

Cox rose to fame from her role as Sophia Burset, an incarcerated transgender woman on the Emmy-nominated Netflix original series, Orange is the New Black. Through her role as Burset, she has brought to attention issues of race, gender identity and socioeconomic status and how these factors have affected her life and how they affect the lives of many others around the United States. The accomplished also actress also scored an individual Emmy nomination for her role as Burset which made her the first transgender woman to be nominated for an individual Emmy. In conjunction with being an actress, Cox is also an equal rights activist and advocate which helped her grace the cover of Time Magazine in 2014 and Glamour Magazine’s “Woman of the Year” making her the first trans woman to do so.

Cox’s speech started later than expected because of increased security following a talk given near the same time by Milo Yiannopolous, an alt-right editor for the website Breitbart News. Maura Towey, chair of CU’s student-run Distinguished Speakers Board, said that Cox was aware of Yiannopolous’s talk and despite her busy schedule and the board preferring she speak on January 31, the actress chose to speak at CU the same day as him. While Cox spoke about equality and institutional oppression, Yiannopolous joked about Muslims, obese people, sexual assault, gender studies professors and railed on feminists and liberals in Boulder. Though marginalized people were the butt of jokes across the campus, Cox praised and tried to uplift her diverse audience. 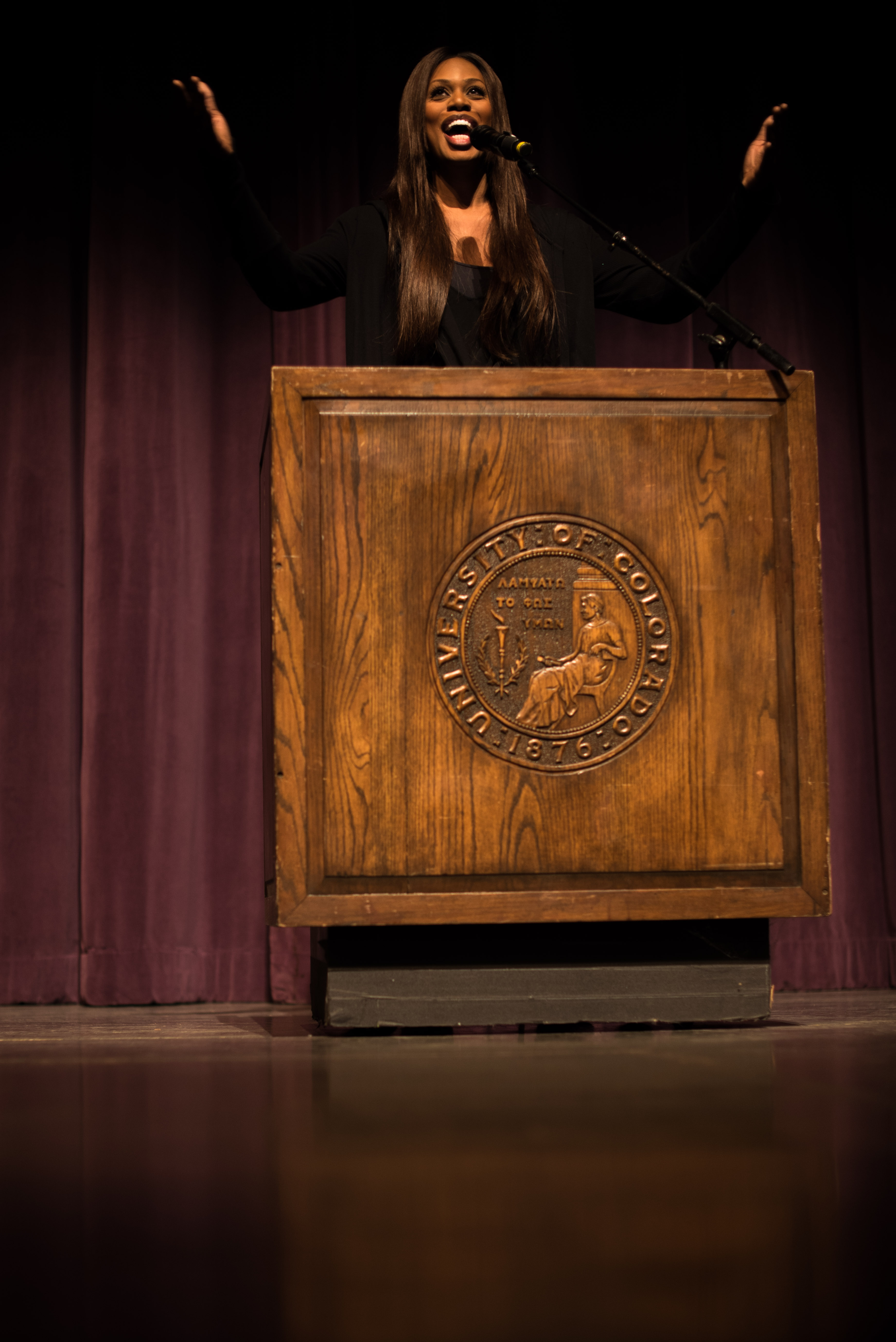 Cox talked about issues of shame, intolerance, bullying and guilt both from her personal experience and from people she has met and read about. Though she was talking about deep and troubling topics she tried to use humor to lighten the mood.

“I began to feel at the very core that something was wrong with me [being trans],” she said. “I didn’t feel safe at school or at home. I felt safe in my imagination…in my infinite wisdom as a third grader, I said there is no difference [between being a girl or boy]. The way I reasoned this in my mind was everyone told me I was a boy, but in my heart I knew I was a girl.”

Following the almost hour long speech, Cox answered a handful of questions that the audience submitted to Facebook and Twitter. The questions ranged from advice about how to support trans youth, advice that she has been given that has helped her throughout her career and life and her opinions on the Women’s March.

“A lot of people are under attack right now and we have to figure out how to come together and I’m not saying put our [personal] traumas aside, but work to work on that trauma so we don’t bring that to our activism. So that we are able to stand in the activism and advocacy [for equal rights] with love and empathy and compassion.”

Even though most of Cox’s speech focused on oppression, hardships, bullying and bigotry, her infectious smile and laughter kept the atmosphere full of hope and inspiration. She ended the night full of positivity, encouraging the audience to be their authentic selves, love each other and stand up for what is right and what they believe in. 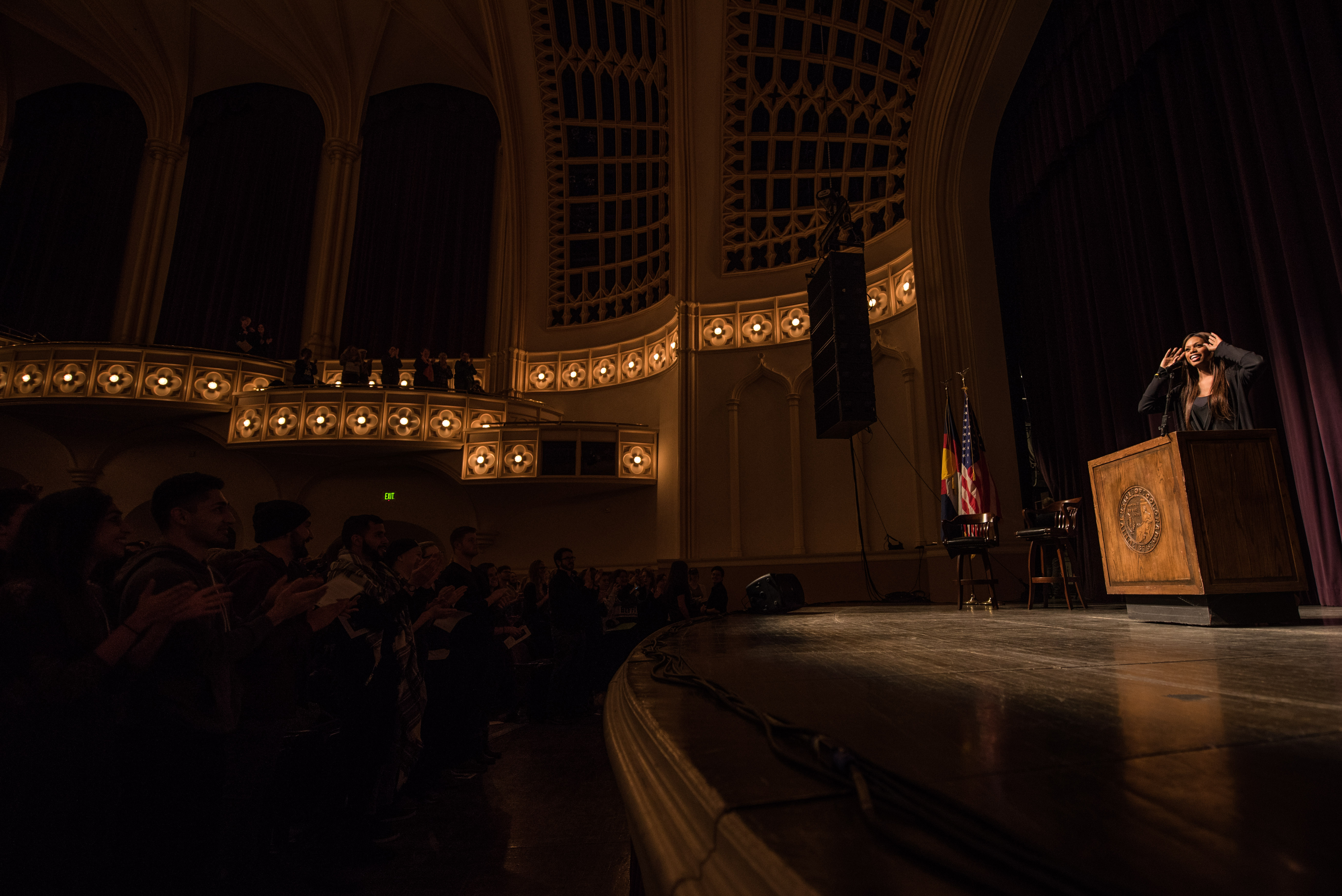